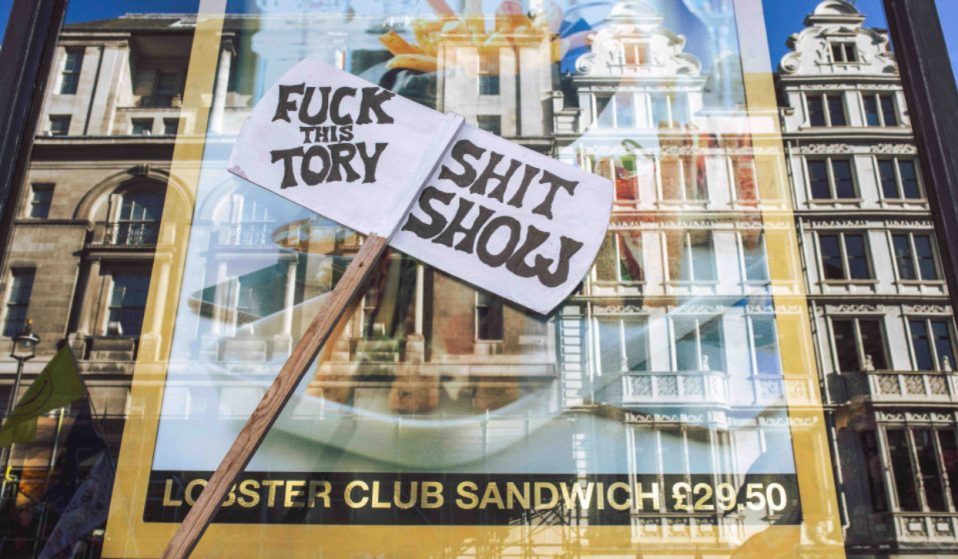 The PM‘s proposal to breach international law over Brexit threatens the very foundations of peace in Ireland writes Dawn Foster.

Despite compromises made to quell backbench rebellion, the prime minister‘s proposal to breach international law over Brexit threatens the very foundations of peace in Ireland, writes Dawn Foster.

On Wednesday 16th September, Democrat presidential candidate Joe Biden tweeted “We can’t allow the Good Friday Agreement that brought peace to Northern Ireland to become a casualty of Brexit. Any trade deal between the U.S. and U.K. must be contingent upon respect for the Agreement and preventing the return of a hard border. Period.”

He linked to a House Foreign Affairs Committee letter imploring Boris Johnson to uphold the principles of the Good Friday Agreement or jeopardise future trade with the US. The Conservative party’s behaviour had grown so hubristic and destructive, that it wasn’t just voices in Britain and Ireland concerned about the tenets of the Good Friday Agreement being shattered, and so destroying a fragile peace, but senior politicians and whole committees in America.

The Conservative approach to the Irish question was best illustrated in one of the replies, from Tory MP Conor Burns: “Hey @joebiden would you like to discuss the Good Friday agreement? It is also called the Belfast Agreement so it doesn’t offend both traditions. Did you actually know that? I was born in NI and I’m a Catholic and a Unionist. Here if you need help.” Trying to cast the Belfast-Good Friday Agreement dual name as a sectarian minefield that actively offends people is inaccurate and some might wonder if Burns either has no clue what he is talking about, or is being disingenuous. Regardless, his attempt to stoke controversy deliberately ignores Biden’s very clear point: the Good Friday Agreement is in jeopardy due to the Conservatives’ Brexit approach and Internal Markets Bill.

Since the day after the United Kingdom went to the polls, countless voices have warned the Conservatives that the UK have a particular issue leaving the EU in the shape of the island of Ireland. It’s a problem that no other country has, or ever will face, leaving no precedent to follow.

To leave the EU, the UK has to somehow ensure that Northern Ireland does not face any changes to the aspects of life that ensure the six counties feel both British and Irish to different people. The biggest obstacle, and one the Conservatives still haven’t properly considered, is the border. Currently, the land border has barely any checks: the majority are on buses and anyone who has travelled from Dublin to Belfast on coach can tell you these checks are always racial profiling, with passports or identity documents demanded from any but the palest passengers. If the border continues to function in the future as it does now, it will immediately become a smuggling route: an easy way to get goods from the UK and out into the EU, or vice versa. People smuggling also becomes a risk.

Instituting checks, of goods but also people, would mean breaching the Good Friday Agreement. This instantly risks a very fragile peace but also means breaking international law. The Good Friday Agreement is very different to the laws passed in either the English Parliament, or the Dáil Éireann. After being drawn up, the pair of agreements were voted on – in a referendum – across the island of Ireland. After signature, it became a binding international treaty. So the decision, by Boris Johnson’s administration, to announce they planned to ignore some of their obligations in the agreement and break international law in “a specific and limited way” shows both arrogance globally, but also a complete and utter contempt for Irish people. The Conservatives have, they say, given concessions to their critics in Parliament to attempt to quell fears over breaking international law, but with both the clear intent there and a lack of a proper solution to the problems around the border, it remains to be seen how they intend to “get Brexit done” without breaching the Good Friday Agreement.

Brexit is purportedly so important it requires breaking international law and risking the collapse of a 22 year peace, because it was voted on in a referendum by UK citizens. This same absolutism is not granted to voices of those across the island of Ireland and the outcome of their referenda.

The two referenda are treated completely differently: one has been allowed to derail and distort politics and the news agenda in the UK for the last four years with ministers utterly committed to the delivery of something no other country has done before. The other has scarcely been regarded and all worries about it dismissed, despite the fact there is far more at stake if the Good Friday Agreement is knowingly disregarded by the British government, ministers ignoring their legal commitments within the deal.

If the British government decide to run with this, it’s unlikely the EU will do nothing. What Boris Johnson’s administration do next is absolutely key for huge numbers of Irish people: many people cross the border multiple times a day, for work, to see friends, to buy milk and a newspaper, because they live on the border. Any change is likely to impact these people first, then spill out bringing with it a deleterious impact on the lives of countless others. And if, as it inevitably will, it causes people’s lives to change for the worse, another referendum is on the cards. For years now, the number of people quizzed by polling companies and stating they’d like to see a united Ireland has risen and risen – on both sides of the border. Brexit has further fanned those flames. If Conor Burns’ colleagues insist on breaking international law in Northern Ireland, they may not have to worry about Northern Ireland any more at all. And that ill-fated trio, David Cameron, Theresa May, and Boris Johnson, will be mentioned in English school history books as the gang who lost Northern Ireland for the Brits.

Linkedin
RELATED ARTICLES
OTHER ARTICLES
A new film from Berghaus traces the story of Adam Raja, who left behind a turbulent upbringing to discover the healing power of climbing.
Photographer Sean Maung reflects on documenting a small town in Pennsylvania afflicted by high levels of unemployment, poverty, violence, crime, and addiction.
A new podcast is opening up the conversation between trans women and trans amorous men in the hope of building coalitions.
A recent High Court ruling against the right to wild camp in Dartmoor National Park sparked the largest land protest in history – and campaigners say their fight is not over yet.
After fleeing the war in Ukraine, people are finding it impossible to secure affordable and decent housing in the UK.
Filmmaker Laura Poitras discusses her new documentary which traces the remarkable life of the artist-activist and the impact of her battle against the US opioid crisis.