News & Politics / How do we break the cycle of violence after the Paris attacks? 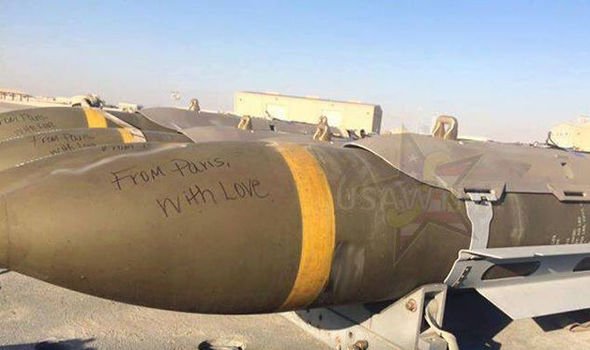 As France launches airstrikes on ISIS and declares it is at war, Alex King asks is there a way to stop the escalating violence?

As France launches airstrikes on ISIS and declares it is at war, Alex King asks is there a way to stop the escalating violence?

After the tragic loss of over a hundred lives, one of the most depressing realisations after the Paris attacks is that nobody will come out of this in a better place. For citizens in Europe, the Middle East and elsewhere, the spiralling cycle of violence will continue to suck more and more people in. France has already struck back at ISIS targets in Syria, and ISIS warns Europeans to accept more of the same.

Terror attacks allow a few people to pose as strongmen: they are a boost to the vanity of leaders of terrorist organisations and elected governments alike. From the foot soldiers on both sides to the civilians caught in the crossfire, everyone else suffers. Unless we have the courage to apply the brakes, we’ll continue speeding down the highway we’ve been travelling for years now, towards less compassion, heightened racism and distrust, more oppressive state control and bombings, lots more bombings.

Albert Einstein once said: “Insanity [is] doing the same thing over and over again and expecting different results.” Long before the September 11 attacks, we’ve seen terrorists and hawkish politicians providing the fuel for one another’s short-sighted ambitions. They’re caught in a death dance as escalation follows escalation and the ‘field of battle’ grows to include Kenyan university students, Nigerian schoolgirls, Lebanese shoppers, French concert-goers and beyond.

So, how do we break the cycle? First, we need to recognise the role of the West, especially the US & UK, in the destabilisation and outbreak of war in Syria and the rise of ISIS. We need to look at what we’ve done, learn from our mistakes and engage in more constructive policymaking in the region – with ending the war in Syria the primary objective.

Since 9/11, every major terrorist attack on European soil has cited our military interventions in the Middle East. The chaos of the Iraq invasion from 2003 onwards not only led to the deaths of over half a million people but helped spark sectarian war which has spilled into other countries in the region. The group we now know as ISIS built its base and developed its ideology in coalition prisons in Iraq.

All of this occurred on a pretext of ‘exporting democracy’, but in reality we’ve exported war and economic imperialism. When uprisings for democracy have broken out, such as the Arab Spring, we’ve offered little help and gone on to support authoritarian dictators, like General Sisi in Egypt, who have stamped out any shoots of democracy.

The destabilisation of Syria, one of the most ethnically diverse countries in the region, began with the influx of Iraqi refugees. In early 2007, the UNHCR estimated that Iraqi refugees within Syria numbered over 1.2 million. Combined with an extreme drought between 2006 and 2009 (which researchers believe most likely due to climate change), this put huge pressure on urban areas and fuelled the discontent that broke out in 2011. Assad’s violent response to the protests lit the touch paper for civil war and the porous border with Iraq allowed the conflict to escalate rapidly, as well-established jihadi networks who cut their teeth fighting the Americans quickly became established in Syria.

The brutality of the Assad regime and ISIS is appalling, but the conflict in Syria and destabilisation of the whole region have the West’s fingerprints all over. For this, and a host of other reasons, the West must play an active role in ending the Syria conflict, but recognise any workable solution will require input from all powers in the region: Iran, Turkey, Hezbollah, the Gulf States, etc. – even Russia. Once everyone is around the table, they need to stop arming competing factions, engage in constructive policymaking to end the fighting and move towards rebuilding, democratisation and development – not just stepping up ongoing bombing campaigns by Russia, France, the UK and US. It will require pragmatism, patience and likely redrawing many of the artificial, colonial-era borders – creating a Kurdish state, for example.

Secondly, end the refugee crisis: establish a safe and credible system to provide sanctuary to those fleeing violence in Syria and elsewhere, ensure that no more children drown in the Mediterranean and prevent ISIS taking advantage of the current free-for-all. When Angela Merkel announced Germany would offer shelter to all Syrian refugees earlier in the year, she scored perhaps the most significant propaganda victory yet against ISIS. Syrians saw that Europe would provide them with refuge and dignity, where many Muslim states had not. As ISIS saw thousands flocking not to their Caliphate, but to Germany, they released dozens of video in panic, begging them to come back. In contrast, US bombing has caused ISIS recruitment to soar.

To shelter refugees would be to make good on the ‘civilised values’ that leaders proclaim to be defending each time a European city is attacked. To leave refugees to drown in the Mediterranean or freeze on the streets of Southern Europe this winter, especially when they’re fleeing the effects of our failed foreign policy, would not only be a moral outrage but also embolden ISIS.

Successfully integrating an influx of skilled young people could be the shot in the arm Europe needs after withering in the aftermath of the global financial crisis. Living up to Europe’s promise of a multi-national, multi-racial, multi-faith democracy could put the continent back at the heart of global culture, politics and commerce. But for that to happen, diversity needs to be embraced and there needs to be a strong counter-attack against cynical, far-right politicians, like Marine Le Pen, who stoke division and racism.

We need to open our doors and hearts, but also our universities, our factories and our offices, to refugees and allow them to integrate (and contribute) socially, economically and culturally. And we need to extend that invitation to the alienated second-generation immigrants, who currently sit angry and isolated in the deprived estates and banlieues, and who have proved so easy to recruit for jihadis. Inclusion, acceptance and dialogue are the best de-radicalisation tools – not police raids or airstrikes.

Finally, we need to live up to the best of European, enlightenment values. And not in the aggressive and polarising way “British values” has been used to police debate in the UK. The founding ideals of the French republic are a good place to start: Liberté, Egalité, Fraternité. Liberty for all, not just white, middle class Europeans. Freedom and democracy throughout Europe, the Middle East and elsewhere. No draconian restrictions on speech, protest or movement and no mass surveillance of peaceful citizens, as the UK’s ‘Snooper’s Charter’ calls for.

Equality; before the law and in the economic sphere. No more extra-legal killings, like the strike on Mohammed Emwazi or ‘Jihadi John’ in Syria. If we’re any better than the terrorist groups we’re fighting, people who commit acts of terror need to be tried and imprisoned, as the widow of David Haines (who Emwazi beheaded on video) called for. Justice – not the martyrdom jihadis seek. Investment and an end to economic plunder of the rest of the world by western multinationals, so that a good job and education are easier to come by and more appealing than a kalashnikov and militant training camp.

Finally, fraternity: we must show our grief and solidarity with the victims of Friday’s horrific attacks, but show the same anger and disgust for other victims of terror. Such as the 41 people killed in two suicide bombings in a suburb of Beirut on November 12 and the 147 people, mostly students, killed in an assault by al-Shabab militants on a university in north-eastern Kenya on April 2. Both attacks failed to generate similar media coverage or the same outpouring of anger as the Paris attacks.

Everyone has the right to live without violence – we can’t leave anybody out. We need to imagine a better world and take the steps required to make it a reality. Like no other conflict before it, the war in Syria is as connected to suburban streets in London as to tower blocks in Paris. While we allow others to suffer violence and insecurity, none of us will be able to live in peace.

Linkedin
RELATED ARTICLES
OTHER ARTICLES
Financial turmoil is pushing people who work in the sex industry into more dangerous and desperate situations as a means of survival.
Photographer David Corio’s archive offers a glimpse inside a revolutionary era of music and nightlife.
A group of young Palestinians have found temporary freedom in the act of parkour, reimagining wreckage and ruins as a series of high-octane playgrounds.
Sean Maung’s photos are a love letter to the Black and brown communities that make up New York.
Yesterday thousands gathered outside Buckingham Palace after news of the Queen’s death broke.
Rhiannon Adam spent three months capturing an ageing society wracked by division, isolation, and the aftermath of scandal.