News & Politics / Britain’s ESEA communities are rising up against racism 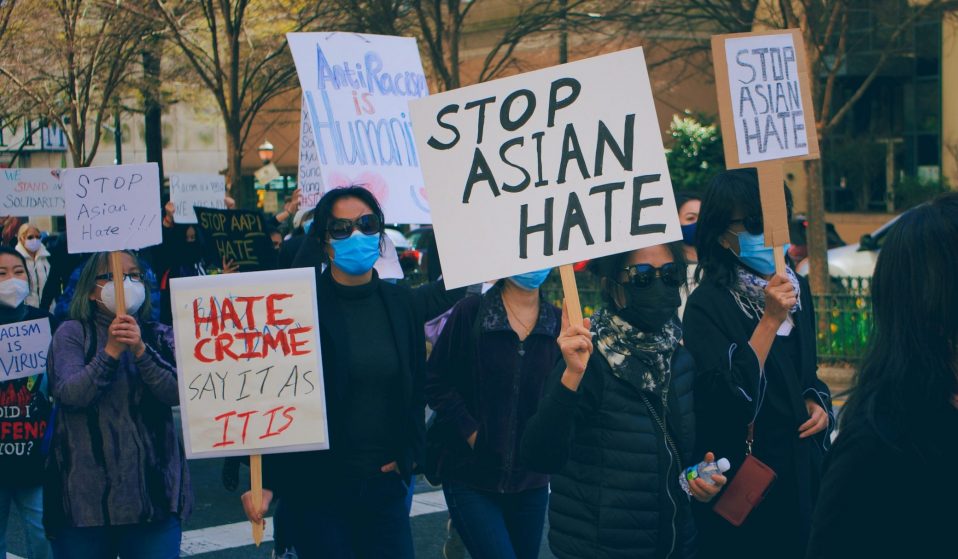 A new collection of essays gives voice to a demographic which has been newly-galvanised into action.

A new collection of essays gives voice to a demographic which has been newly-galvanised into action following a rise in anti-Asian hate.

In the past few years, a slow political awakening has taken hold of Britain’s East and Southeast Asian (ESEA) communities. A demographic which has historically been made politically invisible, ESEAs have been galvanised by an alarming increase in violence, from Covid-related anti-Asian attacks, to the deaths of the Essex 39, to the disproportionate death rates for Filipino health workers.

East Side Voices (Hodder & Stoughton) provides a timely reflection on this new movement. Consisting of essays and poetry by 18 British East and Southeast Asians, it traces the histories of migration that led to ESEA communities arriving in Britain, and considers the challenges they face today. The book feature essays by high-profile figures such as Gemma Chan, but anecdotes about Hollywood life are less engaging than the neglected histories the book uncovers, from discrimination against British Chinese merchant navy workers to queerness in Burmese culture.

It’s easy to find fault with some of the book’s premises: the notion that we should focus on representation in elite spaces like media, for example, when those who bear the brunt of anti-Asian racism are often working-class or undocumented. But the book also offers a look at what solidarity and community-building between groups might look like. The ESEA community is coming into political consciousness in real time, and East Side Voices invites its readers to be a part of that process.

Huck spoke to the book’s editor, Helena Lee, about East and Southeast Asian life in Britain today and what comes next for this nascent political movement.

The Covid-19 pandemic felt like a turning point for many East and Southeast Asians in Britain who were harmed but also galvanised by the anti-Asian racism it sparked. How did that shape the collection?

I had conceived of East Side Voices before we even knew what the word Covid meant – it began as a literary salon, with our first two meetings in the Standard Hotel, and I had gotten the book deal from that. It felt really positive, but when Covid happened it felt as though the ground was shifting beneath our feet. It began to feel even more that the book was necessary.

There are many reasons why these awful things were happening to British East and Southeast Asians, but one of them was an othering; a dehumanisation of our community. I felt there had to be something to break the cycle of non-representation, and some of the essays reflect that.

One of the most interesting aspects of the book were the many neglected histories that it uncovers, such as the deportations of the Liverpool seamen. Why do you think those histories have been erased, and what can ESEAs today gain from learning that history?

You need to understand those stories to be able to fight for your cause. Activism is personal, and to help contribute to a better society, you have to understand what it is you’re fighting for.

What’s been tough for East and Southeast Asians is not having that vocabulary to articulate exactly why things are racist. Challenging that requires the knowledge and the confidence to articulate why something is offensive or harmful. I think that’s a reason why histories like those of Liverpool seamen haven’t been told.

It also comes back to what’s being commissioned and what people think will feed the public interest. East and Southeast Asian stories probably weren’t seen as British stories, so they weren’t considered important enough to tell.

One issue that writers from marginalised groups face is being pressured to offer up their own personal trauma in their writing for the sake of a voyeuristic reader. How can this be challenged?

East and Southeast Asians are limited by a false idea of authenticity. If you’re not talking about, say, Malaysia or China, then your story is not seen as worth listening to. Whereas there’s nothing that specific to being British East and Southeast Asian. Part of the reason for that is because it is so disparate and varied, it’s not meant to be one monolithic entity – and so it’s seen as ‘too complicated’ for the public consciousness to grasp.

But I have great hopes. Claire Kohda, for example – who contributes an essay to the collection – has written a new novel, Woman, Eating, about a mixed-race vampire. It’s great that we’re now able to explore genres that have been traditionally kept away from us: to tell the story of a young, mixed-race, Asian vampire having agency, not being some wilting, submissive character, as people often see Asian women as.

One tension within the book is the broadness of the ‘ESEA’ label, and the way it combines people from various backgrounds and socioeconomic positions. How can we better understand those differences and work in solidarity with each other?

For my personal perspective, I wanted to learn about those different groups myself. For instance, in a small microcosm, my mother is Malaysian Chinese; my dad is from Hong Kong. When I was growing up, I had no appreciation of the fact that they came from completely different countries. They spoke to us in a completely different vocabulary, they had different traditions, but it all fell under this erroneous idea of Chineseness.

One thing which contributes to this fact is that the census categories don’t take into account any ESEAs except Chinese – they would have to tick “Asian – Other”. That means that there could be between 400,000 to 1.2m ESEAs in Britain, which is a huge range.

The book is about respecting those cultures and respecting the differences in experience. I wouldn’t presume to know and understand what’s happening in, say, Myanmar, or how that affects the diaspora here. But it’s only by talking and facilitating these conversations that solidarity can exist.

The book has a number of essays by people who have worked in the food industry, one of the fields where ESEAs have both found success in but also been exploited by. What can the food industry tell us about ESEAs in Britain?

I wanted food voices in the book, but I also wanted to understand the world beyond food and what that means in a culture – Amy Poon, for example, who I actually commissioned to write about divorce but who spoke about it in the context of food as she comes from a family of brilliant chefs.

The book comes out in the wake of several non-fiction works by Asian-Americans (Crying in H Mart, Minor Feelings). Would you consider this book in conversation with these texts?

They’re definitely in conversation. People really took to Minor Feelings because it articulated that sense of unease and not being seen. But it was in an American context, which is a lot more politicised: they’ve had the Vietnam War, the Korean War, the Exclusion Acts. “Asian American” as a term was invented in 1968 as a way of politicising that demographic, where before then, nothing existed as a collective term. We can certainly learn from that, but we also need to assert our own identity within the British consciousness.

East Side Voices is out now.

Linkedin
RELATED ARTICLES
OTHER ARTICLES
The government is scrapping the Human Rights Act in a move that will hit marginalised people hardest.
In our first OFFF Dispatch piece, the Arce Studio founder shares her tips on standing out from the crowd.
The government’s failure to take long Covid seriously has led to the formation of a group campaigning for the thousands of forgotten victims of the illness.
Over the weekend, London locals came together to resist a pre-planned police raid targeting delivery drivers.
The revered showbiz chronicler recalls his journalistic beginnings, documenting subcultural scraps in the ’80s.
In the last of our dispatches from OFFF Barcelona, Rufus Deuchler and Vincent Gault discuss the future of creative process.