News & Politics / British trains are a disgrace, regardless of why Jeremy Corbyn sat on the floor 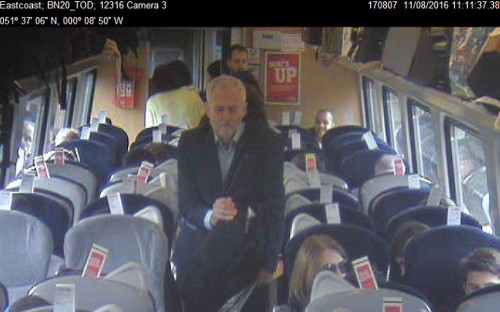 Yesterday the headlines were filled with stories about why Jeremy Corbyn had sat on the floor of a Virgin train. Big business said it was a choice, Corbyn and his fellow passengers said the carriage was full. The real question is why are British trains so awful?

The summer might be slow for news, but it's still no excuse for #Traingate. Yesterday the headlines were filled with stories about why Jeremy Corbyn had sat on the floor of a Virgin train. Big business said it was a choice, Corbyn and his fellow passengers said the carriage was full. The real question is why are British trains so awful?

Trains in England are largely terrible, loathed here more than even a train should be. Sure, the staff are often great, at least relatively speaking, but a redeeming feat this certainly is not.

It might come as a surprise, but having used French trains, I started to appreciate that in comparison the staff here are pleasant, helpful, and actually appear to take some pleasure in their job. The contrast, though, is that while the French have awful customer service, it’s balanced out by the speed, price and efficiency of their actual trains. It might take them an hour to get onto a train, but they can afford to waste time if they know they’ll actually get to their destination on time.

It’s not even just the cost though. Because of the fragmentation of providers caused by privatisation, it’s sea of confusion when trying to work out how to book a ticket, and who to book it with.

To use France for comparison, if you want to book a train, you, well, you just use their national-owned train service website, SNCF. One website, one set of prices, far cheaper than the shitshow the Branson and his ilk have to offer.

Yet, we have no choice. Because of the impracticality of using coaches for anyone who doesn’t enjoy miserable coach conditions, can’t afford the regular expense of maintaining a car, or who quite reasonably can’t stand rush hour, it remains the least bad option. But we aren’t fools. The lesser of several evils is still evil.

Virgin trains has an overall rating of 2.9 on uk.trustpilot.com. Of the first page of reviews, 60% are 2 stars or lower. The last review left gave them 1 star, presumably because no stars isn’t an option.

Southern Rail is so bad that people don’t expect the trains to turn up and are pleasantly surprised when they actually do. The list goes on.

The rail system is creaking, and despite all the engineering work disruptions, the service never seems to improve. They have cut their service to a skeleton schedule and yet still cannot maintain it. Companies are at war with a union who have the temerity to insist on safe practices. All in exchange for thousands of pounds a year from their customers, left without a choice.

To top it off, prices increase at a rate of inflation well above the speed at which our wages or benefits increase, if indeed they increase at all.

In January 2016, after the most recent hike in prices, some season tickets for commuting hit the £10,000 mark for the Virgin service between Birmingham and London. These price rises came in addition to the hundreds of millions of pounds given in subsidies by the state to private providers.

Corbyn on the floor

These private providers then use these subsidies, and the unjustifiable prices, to pass money onto their shareholders. Even under a deeply unfair free market, capitalist system, this feels like someone’s taking the puss. In return for providing an expensive and unreliable train system, Branson and his cronies are from both state and customer turning a profit.

And so we rumble on to #Traingate or #desperation, which is a more accurate hashtag. Jeremy Corbyn sat on the floor of a train, something we’ve all been forced to do.

Some poor excuse for a journalist thought their entrance for a Pulitzer prize would be an expose into whether or not a politician was being honest about not having a seat on the train.

Tax exile Richard Branson then ham-fistedly posted CCTV footage of Corbyn walking past empty seats. Except, if he’d ever taken one of his own exasperating trains he would have realised the screengrab he was tweeting didn’t show empty available seats, but empty reserved seats. We could have focussed on how a super-rich business man was using CCTV pictures of the public to further his own political aims, but of course we didn’t.

And why does any of this matter? Because, after the most shambolic attempt to get rid of a politician that they deemed inept and incompetent, the mainstream media, the commentariat and 172 MPs have plain ran out of ideas.

The Corbyn smears have taken on a predictability not seen since JK Rowling started retconning Harry Potter with her bizarre wheel of fortune tweets. Today, Hagrid is actually a leather daddy. Today, Corbyn ate a dying boy’s hamster. Today, Corbyn pushed his own cat into a heap of dog poo.

This incident is really two sides of the same frustrating coin. Train gate is yet another chance for the liberal morass of journalists to continue their sneering at Corbyn, a man who has his faults but is clearly correct on the need for the nationalisation of the railway, a view the majority of the British public share.

Instead, we’re all too quick to believe Branson, a tax-exile with a vested interest in keeping Corbyn out, despite obviously being aware that the service given to us all is woeful.

At the same time we see the indulgence of big business. Ultimately, a responsible media would have challenged a private rail provider whose own customers complain regularly – and have spoken in support of Corbyn’s account.

It’s no surprise that a private rail provider is hitting back as a man tries successfully to discredit a system very comfortably benefits their bottom line, but nobody else.

The trains in this country are awful, but nobody in charge will take on the reasons for the incompetence and unfairness. Even if you dislike Corbyn, it is a self-evident truth that trains are expensive and an extortionate misery to use. This was the chance to make a service better for the country, instead it is being used to discredit a sensible policy because Corbyn is supporting it.

Linkedin
RELATED ARTICLES
OTHER ARTICLES
With abuse of call-centre staff on the rise, many are now speaking out about the hostility they’ve faced.
Jermain Cikic reflects on his experience of visiting the island of Samos, Greece, in the summer of 2021.
From Brooklyn gang members, to Welsh miners and the residents of East Harlem, Bruce Davidson used his camera to shine a light on the most marginalised.
A new book traces the legislation’s tumultuous history and the lasting impact its had on LGBTQ+ activism today.
Photographer Alice Mann reflects on capturing the camaraderie and discipline it takes to succeed in a highly-competitive sport.
While the popular news aggregation service has been kicked off Twitter, its demise does not spell the end of digestible misinformation.