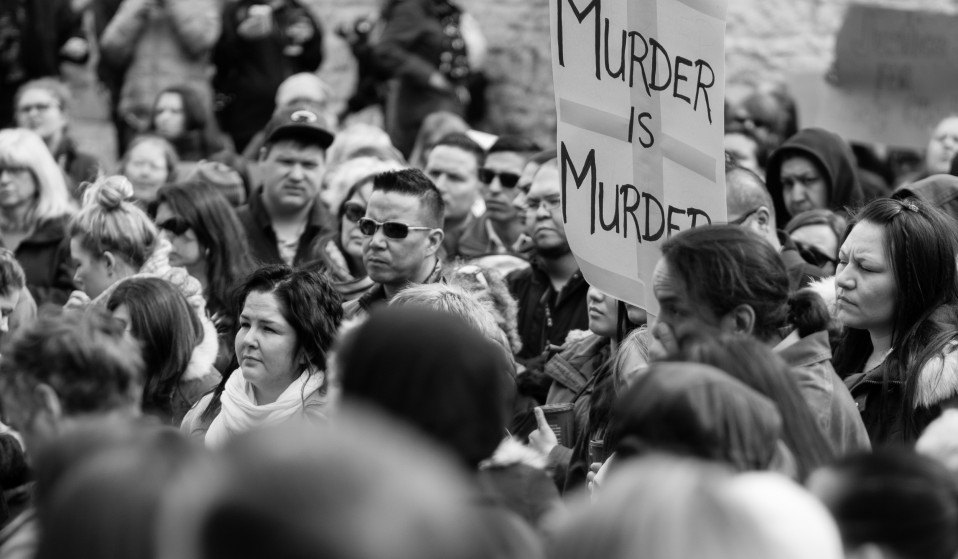 The homicide rate for indigenous women is four times the national average. At long last, Canada’s new government is no longer ignoring the problem.

The homicide rate for indigenous women is four times the national average. At long last, Canada’s new government is no longer ignoring the problem.

After years of anger and protest, the Canadian government has finally addressed the murders of indigenous Canadians. Members of Canada’s First Nation communities made up a quarter of all Canadian homicide victims in 2014, despite forming just 4% of the country’s population. On December 9, the new Liberal government led by Justin Trudeau announced they are launching a much-demanded inquiry into what has become a national crisis.

According to a 2014 report by the Royal Canadian Mounted Police, an estimated 1,200 Native women and girls went missing or were murdered between 1980 and 2012, though it is widely believed actual numbers are much higher. A Toronto Star investigation this year also revealed that half of the murdered women did not know their killers, which suggests targeted killings.

The murder of indigenous Canadians, known as the First Nations, has long been an unspoken emergency in the country, granted little in the way of mass publicity. That is until the murder of 36-year-old Cindy Gladue, a sex worker found dead in the bathtub of a motel in 2011. One of the few Native murders to gain high-profile coverage in the country, the man initially charged with her murder was acquitted in March of this year by a jury of nine men and two women, none of whom were indigenous. This followed a trial marred by controversy and accusations of corruption and disrespect during the investigation.

The Gladue case quickly led to an outpouring of protest led by the No More Stolen Sisters campaign, launched by activists determined to bring justice to victims and curb the systemic devaluing of indigenous life.

Rebuilding the relationship between Canada’s First Nations and those in power was one of new Prime Minister Justin Trudeau’s major political pledges on the campaign trail, and said in a speech to community leaders, “It is time for a renewed, nation-to-nation relationship with First Nations peoples, one that understands that the constitutionally guaranteed rights of First Nations in Canada are not an inconvenience but rather a sacred obligation.” The country’s prior Conservative government widely resisted launching a special inquiry into the murders, despite mounting uproar.

Trudeau has announced that the size and scope of the inquiry will be personally shaped by First Nations representatives along with the families of the many victims. Perry Bellegrade, the national chief of the Assembly of First Nations, responded with relief to the announcement. He told CBC News, “After years of denial and deflection, it is my hope we can make real strides in achieving justice for families and achieving safety and security for all our people.”

Linkedin
RELATED ARTICLES
OTHER ARTICLES
Photographer Sean Maung reflects on documenting a small town in Pennsylvania afflicted by high levels of unemployment, poverty, violence, crime, and addiction.
Theo McInnes’s photos of the annual event provide an intriguing snapshot of contemporary Britain.
A recent High Court ruling against the right to wild camp in Dartmoor National Park sparked the largest land protest in history – and campaigners say their fight is not over yet.
Social prescribing connects people with non-medical support to improve their health and wellbeing – but some experts worry it’s just a stick plaster solution.
After building his reputation covering the US civil rights movement in the 1960s, the photographer went on to produce some of the most enduring images of the past century.
Since 2007, Gideon Mendel has made 20 trips to document floods in 13 countries. The result is an alarming record of what has already been lost to the climate emergency.