News & Politics / Activism / COP26 is our last chance to save humanity 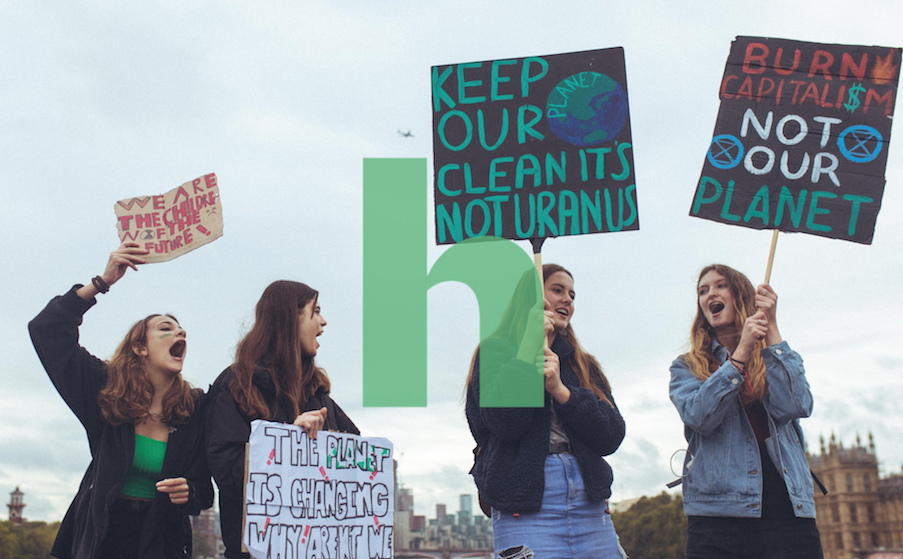 The climate crisis is rapid, widespread, and intensifying. That's why, to mark COP26, we're running a Huck climate takeover.

The 2018 IPCC report says that there are nine years left to save humanity. A report from the same body earlier this year said that this moment, and the warnings of what our future might look like, are “code red for humanity”.

We are, undeniably, at a crossroads. The road ahead, with unchanged or lacklustre adjustments to emissions and pollution leads to certain ruin. An irreversibly altered planet. A climate that once allowed us to thrive turned hostile. The slow, excruciating death of humanity.

We know all this. In a January 2021 UN poll – the biggest ever such poll – two thirds of the world’s population believe that the climate crisis is a global emergency. The environment has steadily moved up the list of issues voters are most concerned about. A 2019 YouGov poll conducted just a month before the general election in the same year showed the environment tied fourth with the economy after Brexit, health and crime. With 25 per cent of voters saying climate was the biggest issue for them, it represented a jump of 14 points from the previous election in 2017.

Despite this, our government is woefully underperforming on the climate crisis. Last week Boris Johnson, on his way to Rome for the G20 summit, declared that humanity was “5-1 down at half time” against climate change. It came just days after his Chancellor, Rishi Sunak, announced a budget which didn’t mention the climate once. Instead of using the opportunity to announce policies and funding to limit and end Britain’s addiction to fossil fuels, Sunak instead announced a cut in passenger air duty on domestic flights. And, the government has still not ruled out new fossil fuel projects in the shape of oil drilling at Cambo just off the Shetlands and Horse hill in Surrey or a new coal mine in Whitehaven, Cumbria.

It is against this backdrop that the 26th Conference of Parties (COP26) begins in Glasgow today. It comes six years after COP21, which led to the Paris agreement to limit global warming to two degrees and 11 years after the Copenhagen agreement which saw leaders of developed countries commit to $100 billion a year in climate finance for poorer countries from 2020.

Scientists have warned we are nowhere near meeting the warming targets in the Paris agreement and the climate finance agreement from 2009 has all but evaporated, with the promised cash yet to actually appear. For many, this COP is crunch time. A moment for the Global North – who bear most of the responsibility for the climate crisis and yet are often least affected – to stand together and commit to the agreements of the past.

As former President and current speaker of the house for the Maldives Parliament Mohammed Nasheed told a crowd in Glasgow last night, “We have come to COP26 to find out if we have a future”. For Nasheed, who represents “a nation that will be extinct if we fail”, this COP is critical. “We cannot wait another year. We cannot leave with empty promises. We want to do a deal. Glasgow is our last chance.”

“If we cannot have a legally binding agreement, we will die as a community and as a nation,” he said. “40 million islanders will vanish. We need to act.”

Mary Kinyua, a fair trade farmer from Kenya, told the same crowd that the need to act on the climate crisis, which has seen drought ravage her country, is “more urgent today than it was yesterday”. Without people like her, who have “long lacked a seat at the table”, there will be no climate justice.

This is a fight for our lives. Though the climate crisis will affect all of us eventually, those who are on the front lines – the poorest, less developed countries – have been battling the devastating impact for years. If leaders in Glasgow do not come to a meaningful, binding accord, it will be too late for them and for all of us.

At Huck, we are dedicated to shining a light on the movements fighting for justice. We have been on the streets. In the meetings. Deep in the centre of every battle for what is right. We have proudly stood alongside the bravest, most inspirational people organising for change over and over again. It’s why, now, as the world turns its eyes to Glasgow, we’ll be doing the same. Over on our social channels we’ll be following activists on the ground as they try to get world leaders to listen and to act. On our site, we’ll be running a climate takeover, bringing the stories and the voices of those here and across the world who need to be heard on the crisis.

There is no greater fight than the one we are currently in. No greater moment to stand together and demand that justice is done – no matter how hard the fight may seem. As insurmountable as the odds may be, we must keep hope burning bright. Hope for a better future. Hope for justice, peace and unity. Together we are strong; we are powerful. Together, we will win.

COP26 takes place between 31 October – 12 November 2021. Keep an eye on Huck’s live coverage of COP on our Twitter and Instagram.

Linkedin
RELATED ARTICLES
OTHER ARTICLES
A new project is documenting formerly incarcerated people as they transition back into civilian life.
A group of young Palestinians have found temporary freedom in the act of parkour, reimagining wreckage and ruins as a series of high-octane playgrounds.
With skyrocketing rents, packed out viewings, bidding wars and more, renting in London has never been harder.
In his 2008 series, the photographer pictured himself as Angela Davis, Martin Luther King Jr., Malcolm X, and other prominent figures.
Following the announcement of an 80% hike in the energy price cap from 1st October, crowds gathered outside the offices of energy regulator Ofgem to protest and declare their intention to undertake a payment strike.
As the Scottish government announces a rent freeze, an activist with Living Rent who fought and won shares how they did it, and what must come next.