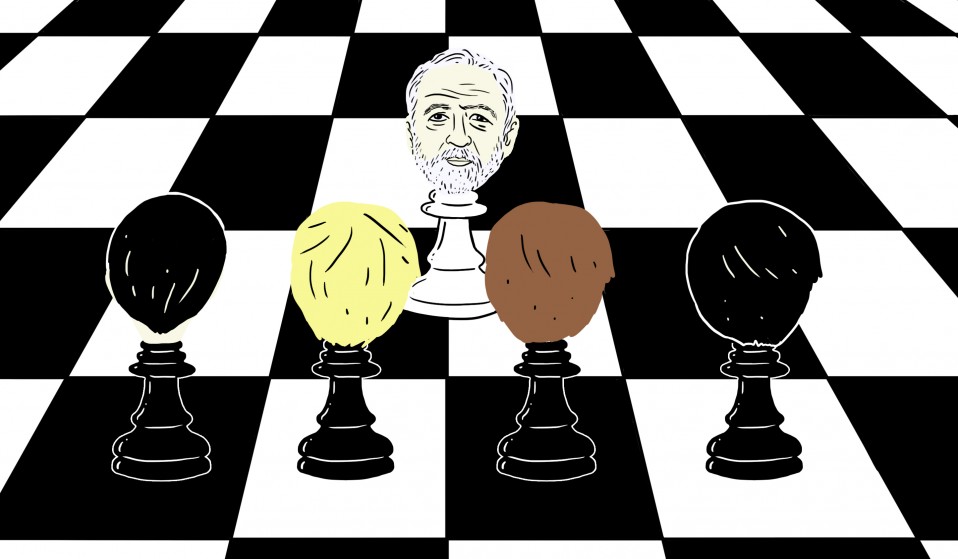 Jeremy Corbyn may have been elected as Labour leader with the biggest mandate in British party political history, but that hasn't stopped his colleagues in Parliament trying to take him out. Richard Seymour argues that this is a well planned coup, an attack on the progressive politics Corbyn and his supporters stand for, and must be resisted at all costs.

Jeremy Corbyn may have been elected as Labour leader with the biggest mandate in British party political history, but that hasn't stopped his colleagues in Parliament trying to take him out. Richard Seymour argues that this is a well planned coup, an attack on the progressive politics Corbyn and his supporters stand for, and must be resisted at all costs.

Pyrrhic victory seems to be the order of the day in British politics. First, the Leave campaign actually gets the result it is seeking, to the immense chagrin of leading Leaver Boris Johnson, who wanted the Brexit cred without the Brexit. Now, the parliamentary Labour Party has achieved a technically stunning series of blows against Jeremy Corbyn, culminating in 81 per cent of Labour MPs voting ‘no confidence’ in their leader. And yet, this might turn out to be a gross miscalculation on their part.

There is evidence of a backlash among members and voters. Thousands of people gathered in Parliament Square at short notice to demonstrate in support of Corbyn — it is difficult to overstate how unusual it is that there are protests in defence of an incumbent. More than half of new Labour members now support deselections for MPs who consistently undermine Corbyn.

More than half of Labour supporters oppose Corbyn resigning. Even former shadow first security of state Angela Eagle, next to deputy leader Tom Watson in driving the coup, was inconvenienced when her constituency party backed Corbyn. There is a polarisation of opinion in the ‘Labour family,’ and Corbyn is thus far winning the argument. And that is consistent with the pattern throughout the whole year, in which a constant barrage of criticism and subversion has only led to Corbyn’s support in the party increasing. Reports suggest 13,000 people have joined Labour in the past week, with 60 percent citing “supporting Corbyn” as their reason.

Now the parliamentary party seem determined to re-run the leadership election, without realising that they would need to do something different and better this time. They cannot agree on a single candidate, they don’t have any shared agenda, they haven’t got any solutions for Labour’s problems, and just about the only thing they do agree on is getting rid of Corbyn.

There is also something striking about the fact that the anti-Corbyn coalition at the top of British politics stretches from the Labour Right to David Cameron to the Daily Mail and the Financial Times. This, again, recapitulates the situation in the summer of 2015, in which the political and media establishment was overwhelmingly lined up against Corbyn, while the Labour membership overwhelmingly supported him. It may not occur to them, but this is exactly one of the reasons why Corbyn won in the first place.

And indeed, if they had understood why Corbyn won, they would also understand why the coup, which would work in almost any other circumstance, might prove to be a calamitous failure. For, despite the paranoid fantasies of some on the back benches, Corbyn did not win because of a left-wing surge, or because of proto-Trotskyists taking over constituency parties.

Corbyn won in spite of the left’s overwhelming weakness — a weakness that is experienced numerically and organisationally. In addition to the shrinkage of left-wing parties, publications and organisations, the labour movement, the historic heart of Labourism and the stronghold of most left-wing hopes, has been in precipitous decline.

What allowed Corbyn, the representative of an always marginalised hard-left current in Labour, to be propelled out of nowhere to the leadership, was the complete enervation of the old management. Their shedding of five million, largely working class votes between 1997 and 2010 had not been reversed by Miliband, who presided instead over the devastating loss in Scotland. The three candidates who stood against Corbyn were ideologically vacant, notoriously difficult to pin down when posed simple questions, and evasive in response to Corbyn’s clear, anti-austerity politics.

They were also unable to reassure the trade unions, who had experienced the worst of New Labour, only to give Ed Miliband a chance and have him go on the attack with the Collins Review reforms. And when hundreds of thousands of people, disproportionately young and working class, people suffering the worst from the credit crunch fall-out and the austerity budgets, began to join Labour, the old party Right panicked and demanded purges.

In short, they did everything they could to demonstrate they had nothing on their side but a basic sense of entitlement — it was their right to run what had always been their party. That is why they lost, and it currently seems probable they will lose again.

The odds have always been stacked hugely against Corbyn. This is not just because he inherited a crisis-ridden party on a long downward trajectory, or because he was always going to face the belligerence and nastiness of his own parliamentary colleagues. In a way, the reach of his ambition is what makes success so improbable. His goal is nothing less than to reconstitute social democracy, and to do so in a way that gives the organised left and grassroots activists more space and power within it than it has ever had before. It’s a political project that will take time, one that will take work, and those who have been determined to end his leadership from the get go have refused to engage in it.

He aims to rebuild Labour as an electoral organisation with its core vote revived, while also safeguarding the union link and implanting Labour in the social movements. He aims to win a struggle for ideas in a country where socialism has long been off the agenda, and where the ideological terrain has been shaped by the Right and their allies in business and the media. These are huge and in some ways contradictory goals, running on different timelines. Winning elections is a short game, linked to the battle for headlines and news cycles. Changing the perspectives of an entire nation and reforming and rehabilitating its biggest party is a longer and more difficult game.

But the fact is, Corbyn does have game. He does have a strategy. It is just not one that the pundits or politicos can understand. But even that, amazingly enough, is more than his rivals have.

Richard Seymour is a London-based writer and broadcaster, most recently the author of Corbyn: The Strange Rebirth of Radical Politics, and a founding editor of Salvage magazine. Follow him on Twitter.

Linkedin
RELATED ARTICLES
OTHER ARTICLES
Theo McInnes’s photos of the annual event provide an intriguing snapshot of contemporary Britain.
A recent High Court ruling against the right to wild camp in Dartmoor National Park sparked the largest land protest in history – and campaigners say their fight is not over yet.
After building his reputation covering the US civil rights movement in the 1960s, the photographer went on to produce some of the most enduring images of the past century.
AI companies that develop image-generators using copyrighted artwork from the internet are coming under fire from artists who say that it amounts to theft.
Following the release of his debut single, Deyaz talks battling addiction, dealing with his struggles through music, and building a budding music career from his living room.
Tristan O’Neill’s shots of dancers caught in moments of reverie at the height of rave’s golden age are a testament to the UK’s legendary club culture.