News & Politics / Corbyn’s election is a victory, but now Labour needs a bold strategy to win 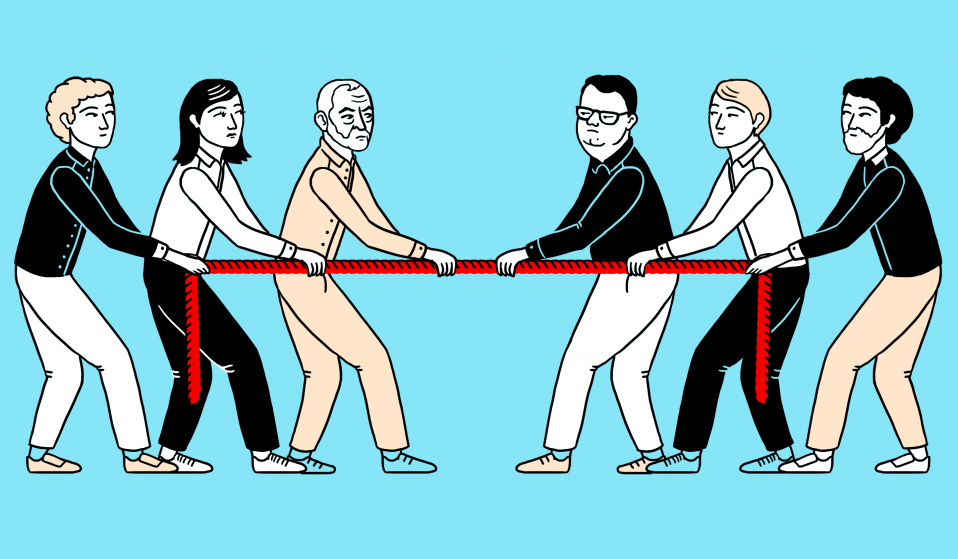 As expected, Jeremy Corbyn has once again swept to victory in the Labour leadership race. Months of wasted time and resources

As expected, Jeremy Corbyn has once again swept to victory in the Labour leadership race. Despite the months of wasted time and resources, Corbyn, and the Labour Party must stop looking inwards if they've a chance of implementing a new progressive platform, James Butler here suggests what must happen next.

As was predictable from the very inception of the challenge, Jeremy Corbyn has been re-elected leader of the Labour Party, with 62% of the vote, and that’s without the tens of thousands of Corbyn supporters purged from the party. So obvious was Corbyn’s oncoming victory, the question has always been less ‘who will win?’ and more ‘what happens now?’ The contest has been simultaneously vicious and stultifying, and left much of the party in disarray: meetings suspended, an erratic membership purge carried out from Labour HQ, rancorous arguments spilt across media, social and otherwise. The problem with winning is what you do afterwards.

There is very little Corbyn could do to appease the most committed coup-mongers: despite protestations, he could never have won them over; they are accustomed to the party’s Left playing a subservient role, and they won’t stomach any reversal in positions.

But the coalition on which the coup was based extended beyond that hard core, and included a far larger number of MPs whose anxieties about party discipline, communication and competency were preyed on by those searching for a pretext. Many of these MPs, instinctively oriented to party unity, hostile to any thought of a split (the trauma of the SDP runs deep) and uncomfortable with civil war, will now be wavering in their opposition.

It is the support of these MPs on which a functioning opposition now depends; Corbyn’s strategy must involve some kind of amnesty, a route back into working together – with the suggestion that those who do not take up the offer bear the blame for the party’s dysfunction.

In one sense, the political advice is obvious and as old as the hills – indeed, stretches right back to Machiavelli – that a leader ought, when he achieves office, consolidate his position by removing threats and competitors from positions of influence. But there is a strong countervailing pressure in Labour to stick together, to proffer at least the appearance of solidarity, and keep scheming at least well hidden: Corbyn’s strength among the membership is partly founded on his rejection of political cynicism and instrumentalism.

One of the challenges he now faces is balancing these two: consolidation without replicating the bunkerish mentality which marred his early office, openness without handing those implacably opposed a stick with which to beat him.

If that sounds difficult, pity the coup leaders, whose resounding defeat ought to occasion some reflection, but who are determined instead to see Corbynism as a midsummer madness, a temporary aberration gone on inexplicably long. Yesterday we learned, in an irresistible political metaphor, Team Smith, desperate for support, attempted to recruit recently dead members to their campaign.

But those determined to blame Corbyn for the party’s woes miss the bigger issue: it’s unclear that any leader can hew together Labour’s fragmenting electoral coalition, least of all one from the pallid 1997 re-enactment society. Times have changed.

We heard once about education, education, education – but delivered in PFI schools falling down around our ears, while the companies who built them cream off £500m from public funds. Mandelson once justified New Labour’s ease with the ‘filthy rich’ by expecting them to pay their taxes. But we know now – as we suspected then – that they don’t.

The hope that the Thatcherite cracks in our society can be papered over by moving a few public sector back offices to gutted post-industrial towns and a few subsidies creamed off an inflated financial sector now looks foolhardy; in the meantime those cracks have grown ever wider.

Yet one of the perennial dangers for the Left in opposition is that it continues to fight last year’s battle while those in power have moved on. Specifically, the risk here is emphasising (anti-)austerity as the primary theme for political conflict; in fact, the new government has distanced itself from the architects of austerity, and May’s relative public silence about economic policy makes her a relatively clean pair of hands.

Austerity has largely done its job: reshaped the state and what counts as permissible public spending. Although it’s still vital to fight against its consequences, especially in the NHS, an effort to claw back a sense of shared public goods will have to hang around the new organising theme of British politics: Brexit.

A telling moment in Laura Kuenssberg’s BBC documentary on Brexit – mostly an undistinguished exercise in court gossip – came when speaking with three retired men in a northern pub. They had voted for Brexit, they said, because Westminster ignored them, took their votes for granted, their representatives were unseen and unresponsive. This, they said, would make them sit up and listen.

The documentary didn’t seek to reflect this, but far more than which Tory stabbed another in the back it will determine the direction of British politics. The anger here isn’t solely economic, but political: not just about housing or services, but less easily quantified feelings about political power, participation and control. Any successful offer from Corbyn would have to combine economic argument with political participation; the recent series of videos from the Corbyn campaign, underlining how widely shared his domestic policy instinct is across the country, is a step in this direction.

Whether Labour’s traditional coalition of forward-minded middle classes and the organised working class can be held together is an open question, but there’s no doubt that this strategy beats the cringing genuflection to racism beloved of the Labour right, a posture which alienates one half of the vote and which can always be outdone by UKIP on the other.

‘Rebuilding’ is one of the keywords of the new Corbyn orientation, but how that will be carried out remains unclear. Promising sounds around domestic policy now require flesh to their bones, and may well be the offer which can attract the party’s wavering MPs to its ranks. But electoral rebuilding will require more than that: it will require Momentum to transform from an organisation primarily concerned with fighting internal wars defending the leadership to building a real political presence in hitherto sceptical communities.

‘Rebuilding’ in Westminster is harder: it requires prising open Tory divisions over Brexit, and counterposing the Corbynite renewal of a social settlement to the deregulation on steroids or  New Commonwealth fantasies on offer from the government. The recent fight over selective education gives a good sense of what it looks like when the government is pinned on the retrograde effects of its policy and its ‘meritocratic’ veiling is torn off.

Behind the Brexit vote lurk the larger and more intractable questions of our time: how to seat national politics with international economic flows; how to defend public goods against a rapacious private sector; how to deal with the effects of globalisation; how to combat the resurgence of a ‘closed’, xenophobic and chauvinist style in politics. To really have ‘won’ the leadership, the Corbyn team now needs to set its sights on those questions and to be unafraid of bold answers. It would be an ambitious project: but only ambition will work.

Linkedin
RELATED ARTICLES
OTHER ARTICLES
Birdy Chu reflects on documenting the historic moment in which the territory was formally passed back from the UK to China.
Sean Maung’s photos are a love letter to the Black and brown communities that make up New York.
Rhiannon Adam spent three months capturing an ageing society wracked by division, isolation, and the aftermath of scandal.
A group of young Palestinians have found temporary freedom in the act of parkour, reimagining wreckage and ruins as a series of high-octane playgrounds.
By turning a real-life crisis into daytime television fodder, TV bosses have once again shown themselves to be completely out of touch with audiences.
The two-day long event returned to London this year, showcasing a spectacular parade, steel bands and Caribbean food.