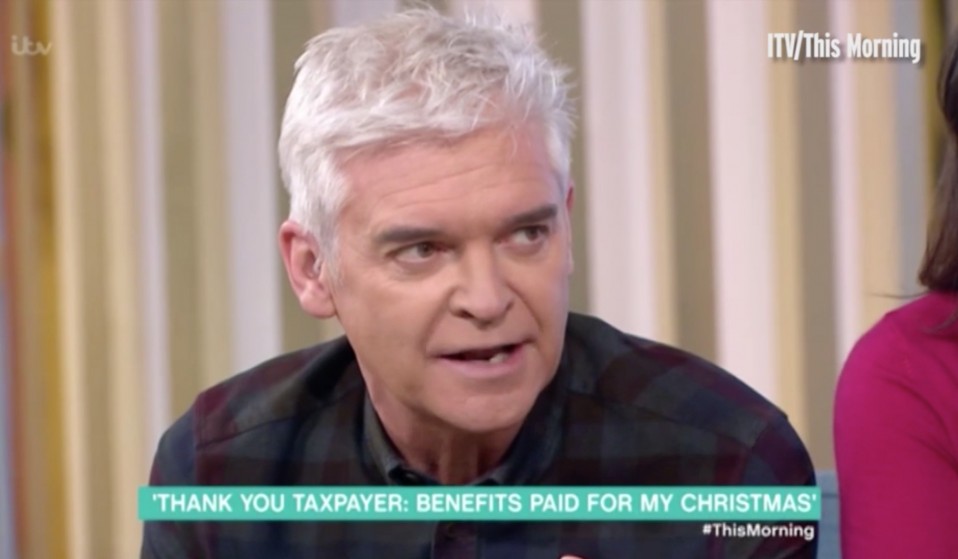 Millionaire TV chat show host Philip Schofield spent yesterday morning attacking a mother living on benefits on national television for trying to give her children an enjoyable Christmas. As someone who works with people living on benefits everyday, Daniel Hibbs-Woodings reckons Schofield is the one who should be ashamed of himself.

I’m writing to this letter to you with the hope that you will not only read it yourself, but pass it on to your executives at This Morning over on ITV as food for thought. My name is Danny, and I work for a social housing charity in South London.

I watched your TV breakfast chat show yesterday, and saw the conversation between you and Deborah Hodge on the show. Someone on your team had invited this single mother on to discuss how she had spent £2,800 this Christmas while living on benefits.

Before we get into my reasoning for writing this letter, let’s unpack that number quickly. The revised benefit cap implemented by the Conservatives as of November 2016 would see a woman in Hodge’s situation in receipt of a maximum of £384.62 in benefits per week after rent. As someone who works in social housing dealing with people like Deborah every day, I can tell you exactly how far £384 goes when you’re raising four children: absolutely nowhere.

In the past I have calculated my tenants’ excess income after bills and daily necessities to less than £5 per week, purely because of the benefit cap. It’s almost as if people on benefits can’t win when dragged onto TV to be lambasted. Had she saved up nothing for the festive period no doubt she’d have been labelled reckless, selfish and a bad parent. Save up all the spare cash (and trust me, there’s not a lot) she’s a scrounger living a life of luxury thanks to Pat and Jim down the road.

As it happens, it should come as no surprise that Hodge had actually used credit cards to give her children a warm and loving Christmas, something we’ve all done and are all no-doubt struggling to catch up with now.

But the truth doesn’t matter anymore, because a far more exciting and news-grabbingly false statistic is already flying around the internet, fuelled by the furious cries of those too lazy to dig a little deeper and find the fallacy in between the digits. It’s a statistic that you created and you broadcasted, and now there are 2800 new reasons to demonise people on benefits.

You then went on to criticise the way your guest had spoken about how she had spent her £10 Christmas bonus from the Department for Work and Pensions. Deborah had posted a photo with two bottles of prosecco, captioned ‘Cheers to the taxpayer for my Christmas gift’. Now, I am not defending Hodge for her ‘incendiary’ wording, as you put it, and in many ways I am on your side that it was a fairly naff thing to say.

But you said yourself that Hodge was entitled to spend the money however she wanted. However, you appear to have done it again. You see this woman’s actions probably rustled some feathers on her own Twitter feed, but your ‘incendiary’ actions by broadcasting these sound bites have sparked the nation into yet another bout of vitriol, not against your guest, but against the benefits system on the whole. The system that so many people I meet everyday rely on.

Like it or not, your words have the power to enrage a society already grossly misinformed about the benefits system, and there couldn’t be a worse time to piss people off than in the morning.

What’s more, if you listen back to your opening question in this mediocre excuse for an interview, you’ll hear what’s truly incendiary. Hodge, a teacher, was forced to leave her job to support an ex-army partner suffering with PTSD and an extremely ill young child. What’s truly incendiary is your attempted interrogation of a woman trying to provide for her family, and lambasting her for celebrating Christmas with £10 worth of what would no doubt be pretty crappy bubbly at £5 a pop.

Your conversation with Hodge on This Morning is not the reason that there exists such a stigma of the benefits system, but it certainly doesn’t help. Interviews like this only serve to fuel the media into perpetuating false statistics and painting the 5 million UK residents reliant on benefits, all with different lives and different situations, with the exact same shade of hate. You make it child’s play for them.

The thing is I love and hate the benefits system. I love it because it forms a cushion between the single mother and the street. It means those who cannot work don’t feel like more of a burden to their families than they already do. On the other hand, I hate it, and you would too if you worked for one day in my job. Fail to provide evidence within an impossible time frame? Suspension. Not demonstrating good cause when trying to backdate an appeal that even I can’t understand – that’s your housing benefit gone for 6 months. Turn up 5 minutes late to the job centre? Sanctioned.

I don’t expect a man worth £9m to understand. You were applauded by your own bosses showing up late and off your face following an award show – how could you possibly understand? I only ask you to take my word as some semblance of truth, and try.

I don’t want to end this letter on a negative note, so I’ll try to do so with a suggestion. Instead of sourcing individuals who make incendiary comments bound to rile people up and marrying that story with a catchy (albeit wrong) figure, how about you contact the struggling mother who failed to provide evidence to the DWP in ‘good time’ and is now facing eviction? What about the heavily disabled person who has been declared fit to work and their benefits sanctioned without notification or trial?

I implore with you to not play your part in the very deliberate and calculated scapegoating of the poorest people in society, and instead focus your cameras on the real monster of society: The Department of Work and Pensions.

Daniel Hibbs-Woodings works for a social housing charity in South London and lives in the city.

Linkedin
RELATED ARTICLES
OTHER ARTICLES
A new project is documenting formerly incarcerated people as they transition back into civilian life.
Yesterday thousands gathered outside Buckingham Palace after news of the Queen’s death broke.
For over a decade, gamblers have won big by employing people to place live bets from the court. But does this dubious method still work?
By turning a real-life crisis into daytime television fodder, TV bosses have once again shown themselves to be completely out of touch with audiences.
Ahead of the release of their first collaborative album, the producer and rapper talk psychedelics and the state of UK hip hop.
Thousands attended the annual event this year to wheelie through the city and call for ‘knives down, bikes up’.