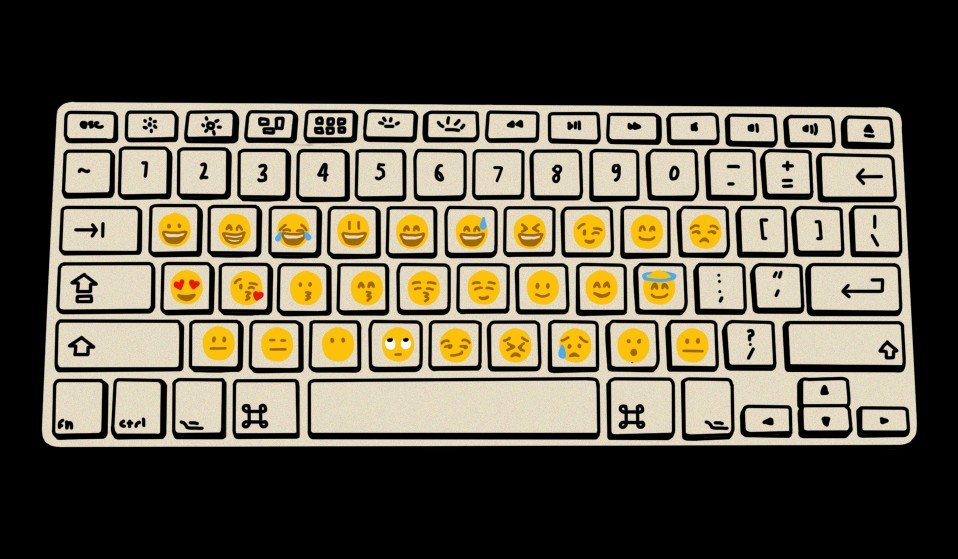 Emojis have become a fundamental part of digital communication, but are they destroying language as we know it?

If you go on Facebook, Twitter or Instagram right now, you’re almost guaranteed to see them. They have penetrated every corner of the Internet and show no signs of slowing down. Over 90% of global Internet users partake.

You might think this sounds pretty trivial or juvenile, yet with over two billion emojis being sent everyday, and even the Oxford Dictionary making the ‘Face with Tears of Joy’ emoji it’s Word of the Year back in 2015, the cultural significance of emojis can’t be disputed. Perhaps you view emojis as the last nail in the coffin for language as a whole, and envision a future of illiterate adolescents standing over the corpse of the English language tweeting ‘poo with a smile’ faces. But do these claims that emojis mark the end times for language have any credence? Are they really destroying communication?

“The short answer is they’re not”, says Vyvyan Evans, Professor of Linguistics at Bangor University in Wales and author of The Emoji Code, set to be published later this year. Contrary to many of his peers, Vyvyan looks at emojis as a fascinating  linguistic phenomena, and a clear demonstration of humanity’s ingenuity when it comes to communication. A far cry from those who argue we’re all headed for something of a linguistic apocalypse.

Vyvyan argues that the emoji’s entrenchment upon society has not come through the degradation of language, but rather, a necessity intrinsic to how we actually communicate with each other.

“To understand why we use emojis, we need to have an accurate understanding of how language works,” Vyvyan tells me. “About 60 – 70% of our spoken communication comes  from kinesics, such as facial expressions and gestures.”

Kinesic communication is an integral part of our communication, with us humans having 250,000 distinct facial expressions alone. Paralanguage – the vocal features that allow us to convey meaning and emotion in our words – is also a vital component, according to Vyvyan.

“I could say I love you with a falling pitch contour and it would be a statement, but if I said it with a rising pitch contour, it would be a question,” he explains. “Digital communication can often invoke the ‘angry jerk reaction’; when you’re reading an email from someone, text alone sucks out the empathy and its near impossible to gauge a person from it – usually it just leaves them sounding quite blunt.” 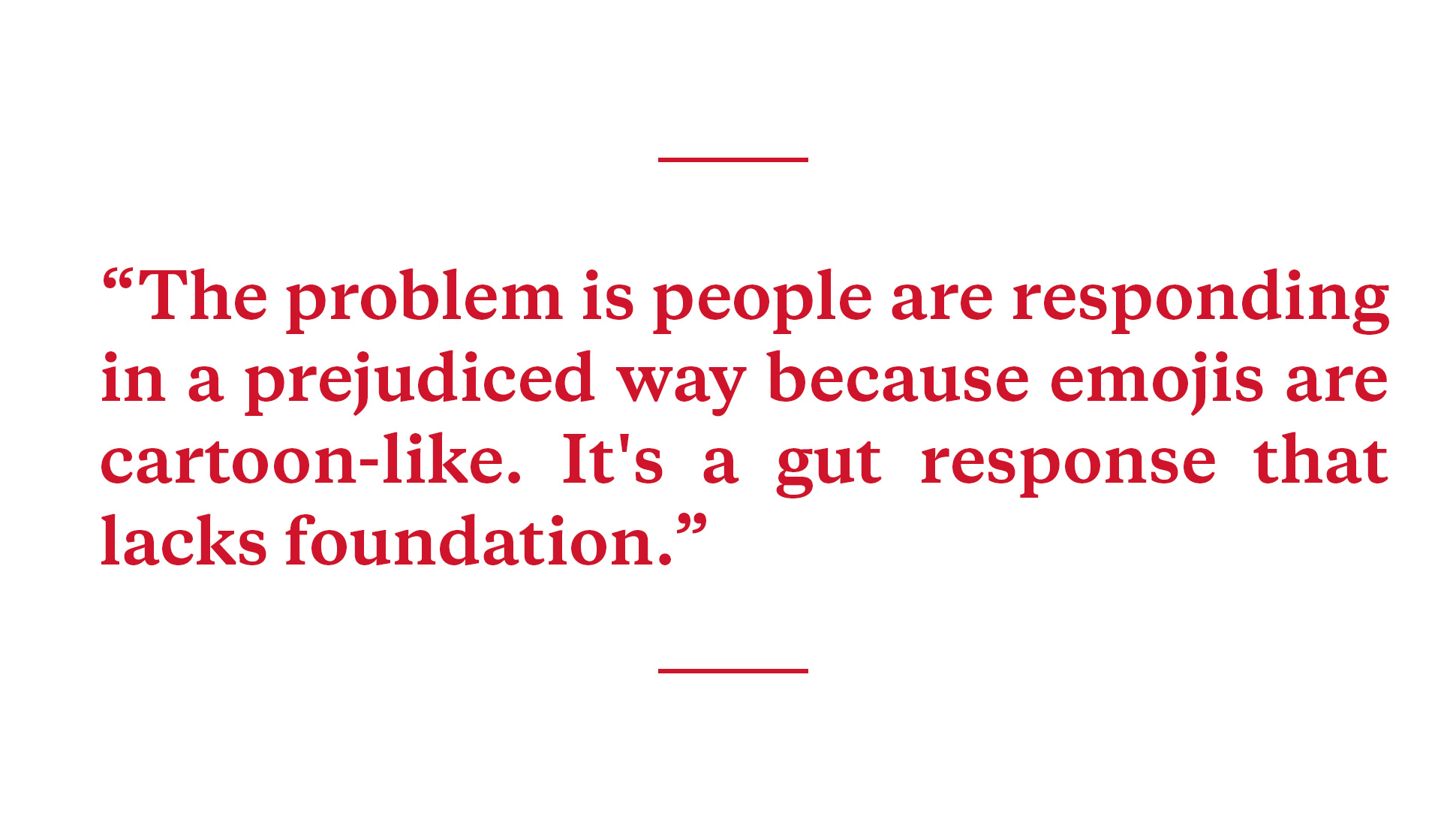 In this sense, emojis allow you to understand what people are implying with their words, fulfilling the linguistic potential of how we communicate. Surprisingly, Vyvyan was not always flying the flag for our favourite digital emoticons. His research into emojis began after he was called in as an expert by The Guardian in 2015, when a 17-year-old Black Lives Matter supporter was arrested under terrorism charges for tweeting emojis of a police officer and three guns. The jury had to decide whether these emojis were conveying an idea or inciting violence against officers.

“They declined to indite because the function to incite violence hadn’t been met – so they were evaluating this threat posed by emoji in the same way as language.”

However, many have been critical of emojis, dismissing them as facile or adolescent and fearing for the future of communication because of them. Although most of us can quite happily construct a sentence without having to resort to smiling-cat faces and aubergines, commentators such as Jonathan Jones foresee us abandoning the literary genius of Shakespeare for these “brainless little icons”.

But as Vyvyan points out, this purist view of language has existed for as long as language itself and he believes that these prescriptivist preconceptions are doomed to fail.

“There’s a misconception that language is something that doesn’t change,” he says. “But we don’t speak the same English as Chaucer and new word coinages only get off the ground when people use them. In this regard, language is the great leveller – it’s a living breathing organism that’s constantly evolving.”

“The problem is people are responding in a prejudiced way because [emojis] are cartoon-like. It’s a gut response that lacks foundation.”

What must be remembered when looking at emojis is that they aren’t a language, but a facet of communication; they nuance language, rather than replace it. But Vyvyan believes that given the staggering increase in use of emojis over only a few short years, their evolution could see them become a language all of their own.

“It is possible for emojis to become a functioning language,” he says. “You can look at blissymbols as an example of how language can be visually based; it’s a symbol-based language that allows people with severe speech and motor difficulties to actively communicate with purely representational symbols, it’s been particularly useful for many people with cerebral palsy.”

However, before you go ahead and burn your dictionary, Vyvyan feels that in their current incarnation, emojis will not become a language.

“Emojis as we know them today have only been available since 2012, so this is still very recent,” he explains. “Yet in such a short space of time emoji has become the worlds global form of communication. In Silicon Valley they’re already experimenting with animated emojis, so without trying to predict the future, it seems we could be seeing the foundations of a new language.”

Perhaps it’s not yet time to construct our linguistic bomb shelters, and instead embrace the continuing evolution of human communication. But one burning question remains; as someone who has studied emojis in great depth, which emoji is Vyvyan’s favourite?

“It would have to be the dancing lady in the red dress,” he laughs. “I’ve been asked this question before and the response is always ‘when would you even use it?’ But I just think it’s a great emoji! And it further demonstrates their versatility as a means of communication.”

The Emoji Code: How Thumbs-ups, Smiley Faces and Hearts Shape Our Language will be  published in May 2017. You can preorder it now.

Linkedin
RELATED ARTICLES
OTHER ARTICLES
Campaigners reflect on what the supreme court’s decision to allow buffer zones in NI means for the future of reproductive rights in the UK.
After building his reputation covering the US civil rights movement in the 1960s, the photographer went on to produce some of the most enduring images of the past century.
A new film from Berghaus traces the story of Adam Raja, who left behind a turbulent upbringing to discover the healing power of climbing.
Jeffrey Henson Scales intimate portraits and protest images of the BPP and its leaders offer a rare insight into organisation at a time of societal upheaval.
After blocking the Scottish government’s gender recognition reform bill, Westminster is now devising further changes to the law to make it harder for trans people to self-identify.
The first-generation graffiti artist reflects on the tagging’s emergence as an art form and the players who pushed the medium forward.