News & Politics / Activism / Exploitative property guardianships are on the rise 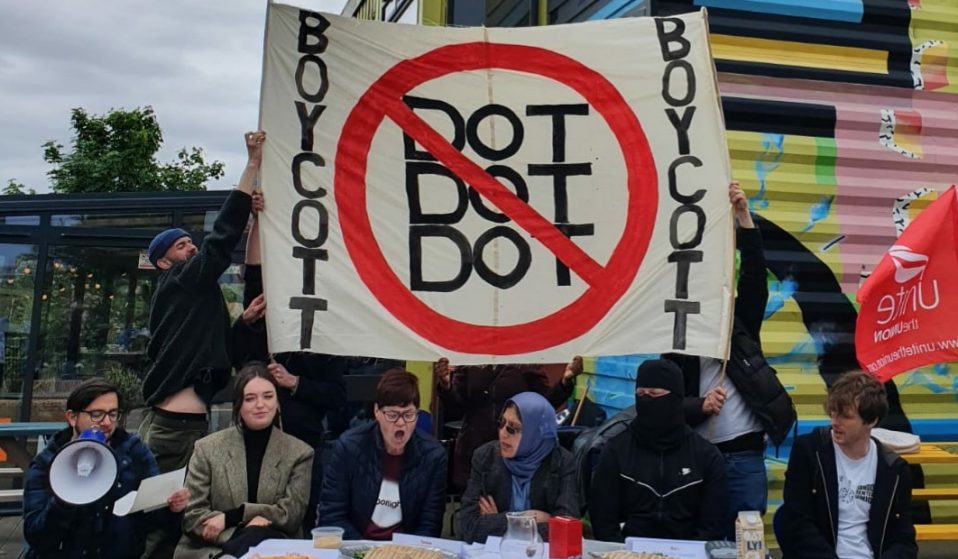 As inflation soars, companies are doubling their prices and allowing living conditions to deteriorate.

As inflation soars, companies are increasingly pushing guardianships as an affordable alternative – all while doubling their prices and allowing living conditions to deteriorate.

The Instagram account for Global Guardians is so familiar, it could almost be comforting. It teems with cutesy, colourful decorating tips alongside captions promising unique living spaces, caring communities – and above all, cheap rent. “Calling all Londoners wanting their own flat thinking they can’t afford it,” reads a caption for one of their reels, “have you heard of guardianships?”

If it all sounds too good to be true, that’s because it probably is. Global Guardians is not a regular letting agent, and those who take up its offers will not be regular tenants. It’s a management company for property guardians, providing live-in security for vacant buildings in exchange for cheap digs. The concept is not new, but it is being given a fresh spin amid the cost of living crisis and record prices in the UK’s private rental market.

Presenting the model as a win-win solution to both the country’s 600,000 empty properties and its housing crisis, the growing industry has set out big ambitions to create a “100,000-strong guardian community”. It’s led to recent promotional spots on the BBC, Money Saving Expert and the i Paper. Guardians and housing activists, however, warn the industry is “exploiting” the skyrocketing cost of housing by charging extortionate fees for decrepit or even dangerous accommodation with few legal protections, all while raking in huge profits.

Just a decade ago, guardianship sounded like a dream come true for young creatives. Thousands lived in big, quirky properties from churches to old pubs at bargain-bin prices. Marcus*, a 29-year-old freelancer, has lived in a string of guardian properties, including a huge room in a run-down east London office block for £200 per month in 2012, and later a £600 to live in a one-bed flat in a trendy part of Zone 1.

But things have changed starkly since then. Now searching for a new room after his latest contract ended, Marcus describes many available properties as “essentially squats at market rent”. He adds: “A place in Finchley Road was £600 per month for an awful bedroom with an obscured window you couldn’t open. It was full of rubbish, smelly and dirty. I just left thinking that somebody is going to get taken advantage of here.

“When I first came to London, you might have a couple of people in a unit, whereas now they’re filling out every room and even dividing them up… It doesn’t seem worth it now.” He says there are rooms he’s seen listed online at prices that would have seemed unthinkable just a few years ago. “Being charged £900 a month [for a guardianship], I think that’s really extortion.”

Firms generally claim to offer properties at “up to” 60 or 70 per cent below market rent for the area. But many are being advertised at prices few would consider affordable. In August, Live-In Guardians listed an unfurnished bedsit in Hackney for £1,125 per month – £100 more than the average private rent for studios in the area. Other recent ads included £1,250 for a dingy room in Holborn and a £945 bedroom in a shared house in Ealing. Even outside of London, guardian flats in Plymouth are going for £400, comparable to ordinary rental properties in the city. (Live-In Guardians did not respond to Huck’s request for comment).

That hasn’t put everyone off. The Property Guardian Providers Association (PGPA) claims 100,000 people applied to become a guardian in 2021 – 40 per cent more than in 2019. Zoom viewings can be packed with more than 30 pre-vetted hopefuls and in-person slots fill up within hours.

But in today’s rental market, that’s hardly the sign of a fair deal. In London, guardians earn an average of 40 per cent less than private renters, making them more vulnerable than most to increased costs. “A lot of people want to leave but can’t because the housing market is so bad,” says Freya*, a 26-year-old admin worker who lives with nearly 50 other guardians in the former town hall in Greenwich, south London.

Residents’ fees went up by 20 per cent earlier this year, with some rooms jumping to £780 from £650 per month. Their management company, Sentry Guardians, said the increase was necessary to cover utility bills, but the enormous building does not have central heating. (Sentry Guardians did not respond to Huck’s request for comment).

“Some [residents] were literally on the breadline… that amount shocked them to the point where their mental health completely deteriorated,” Freya says. “I felt like I was put in a corner. I had to accept this increase.

“[Living here] isn’t a choice, it’s out of desperation,” she adds. “[Certain companies] brand themselves as social enterprises, like they’re doing you a favour by giving you a ‘cool’ way to live. But there’s nothing cool about being cold all winter, having poor facilities, damp, issues with the basics of housing… I know I’m not getting what I pay for.”

Many other guardians have also had their fees hiked with little notice. As gal-dem reported earlier this year, a large management company, Dot Dot Dot, faced a fierce backlash in March after more than doubling fees at some of its London properties with one month’s warning.

.@dddproperty are trying to evict property guardians & MORE THAN DOUBLE THE RENTS of others across London

They delivered a business case saying they can manage their homes better themselves!
💼🔥🔥

Green Party London Assembly member Siân Berry tells Huck she has been “regularly” contacted by property guardians facing unaffordable rent rises amid the cost of living crisis. “Worryingly, many residents are being asked to sign new tenancy agreements… if they refuse to do so, [they] are then served with eviction notices.”

This is all perfectly legal. Because guardians sign ‘licences to occupy’ rather than tenancy agreements, they can be evicted with just 28 days’ notice for a laundry list of breaches. It also means ordinary housing standards do not apply. Guardians told Huck of issues such as dodgy electrics that burn the plugs off their appliances, unannounced bedroom inspections, bathrooms with “cowboy” plumbing, leaky roofs and persistent mould.

“They’re just greedy,” says Paul, 38, of guardianship companies. He was among nearly a dozen people removed from an office building in Stratford this summer after they repeatedly complained to Lowe Guardians about a serious bed bug infestation. Some guardians had to go to the hospital for their bites and understandbly, this took a mental toll. “I took time off from work,” says Paul. “Every night I would check my bed for signs of bedbugs.”

The company eventually moved residents out so the whole building could be fumigated – a process that can take months. But Paul saw the property relisted on Lowe’s website within weeks – with the licence fee increased from £475 to £700 per month. (Lowe responded to Huck’s request for comment by saying that the property is now “completely clear of any issues going forward” and that it had increased fees by 10 per cent to cover higher energy prices.)

Graham Sievers, chairman of the PGPA, argues that guardianship is still an affordable option for many. He says licence fees usually include utility bills and cites the increased cost of materials needed to maintain older buildings. “A quick check through available guardian properties today, and I can still see significant savings for this type of accommodation [compared to private rent],” he says.

But Joris Lechane, a housing activist and equality, diversity and inclusion advisor, thinks comparing the price of guardianship to private rentals is part of the problem.  “We’ve internalised so much that living in London should be a ridiculous price,” he says. “Market rate is itself artificially inflated and unattainable to young people… People do not become live-in guardians because they had several options of places to rent or even buy. But this is the way it’s presented to us.”

Lechane points to the reason many of these properties are vacant in the first place: “Landlords are refusing to use them to house people [long term] because they think they can do something better with it.” Indeed, property owners can save massive amounts of money by using guardians while waiting to redevelop or sell their properties. Global Guardians boasts that it has saved its clients more than £431 million to date, including £403,536 in empty business rates for a single commercial building in east London. Owners of a Clerkenwell office block managed by Lowe Guardians have avoided paying £120,000 yearly in security costs and £450,000 in taxes.

The fees guardians pay are now so lucrative, management companies sometimes split the takings with property owners. Some landlords do not pay for the ‘service’ at all.

So far, the government has not stepped in to regulate the sector, saying it does not want to “endorse or encourage” these schemes. But in the meantime, the industry is looking to grow, including by signing contracts with local councils, housing associations and other public bodies.

Members took action again today vs property guardianship company @dddproperty after rent increases of up to 113%. This time we launched a boycott.

RT to spread the word! 📣

“A few guardian companies have approached the NHS to house key workers using ex-NHS buildings,” says Dr Emma Bimpson of Sheffield Hallam University, co-author of a recent government-funded study into the sector. “They’re basically repositioning themselves as even more of a social good… and have put a big PR effort around this to try and shift their reputation.”

She is not surprised guardianship businesses are making use of rising inflation, too. “They are quite canny, they’ve got a lot of resources behind their marketing teams,”  Bimpson says. “They’re good at responding to new opportunities.”

The sector is still small, with only around 7,000 to 10,000 guardians thought to be living in the UK. But Dr Kesia Reeve, another co-author of the Sheffield Hallam study, warns, “If the industry is trying to expand as a response to the cost-of-living crisis, I think that is a real concern… virtually every [guardian] we spoke to was living in pretty horrific conditions.”

There are however signs of hope. Dot Dot Dot guardians joined forces with London Renter’s Union to fight their fee increases in court and call for a boycott of the company. Some former residents are starting up a housing co-op, which will arrange not-for-profit guardianships. In the Netherlands, similar actions resulted in a monthly price cap of €250 (£218) being imposed on all guardianships several years ago.

If fees continue to increase while the private rental market remains off-limits for the majority of British guardians, we may well see more start to fight back – and win.

Linkedin
RELATED ARTICLES
OTHER ARTICLES
Shaunak Sen discusses his documentary chronicling an ad hoc hospital’s efforts to protect the city’s birds of prey.
Following the release of their third album, the duo talk collaboration, family and connecting with the dead.
A centuries-old tradition is offering families a way to honour the deceased, reports Arbab Ali.
A new photo series documents tribes preserving the environment through simple, sustainable practices in central Asia.
With the singer’s tour in full swing, we sat down the musical production company who made the electrifying show possible.
The photographer reflects on a decade which saw the rise of MTV and the flourishing of new genres.