News & Politics / Is Trump manipulating fears to mobilise the masses? 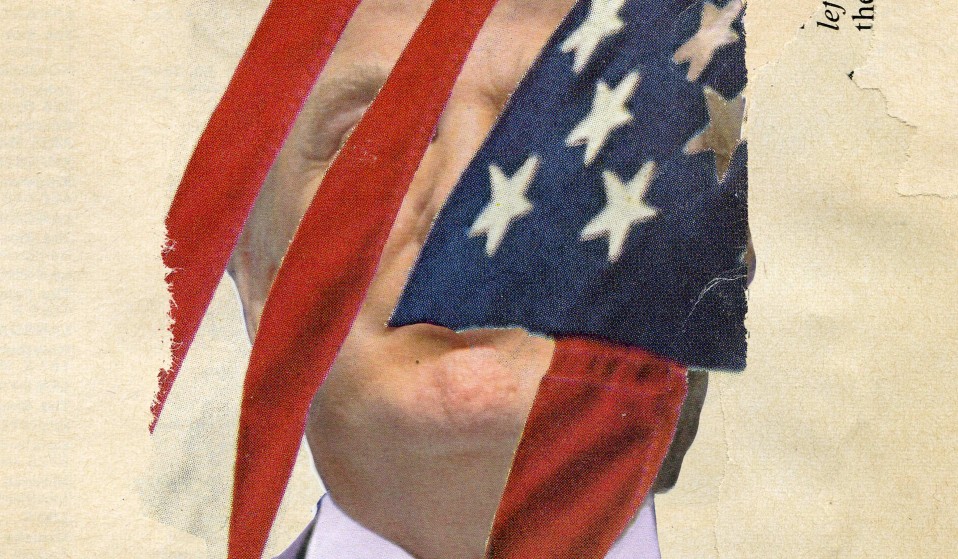 What lies behind the Presidential campaign that's freakier than a haunted house?

With violence erupting at Trump rallies across the United States, writer Joe Donnelly considers what may be at the root of people's hatred, the fears that Donald Trump is tapping into to create tension, disunity and malcontent.

Watching US Presidential primaries play out is like walking down a long hallway lined wall-to-wall with fun-house mirrors. What we see is ugly, twisted and distorted – but in the case of our national politics, nobody seems to know the way out. After all, we are but one FBI interrogation of Hillary Clinton away from an orange-tinted charlatan spray- painting the White House in gold leaf and calling it beeyootiful!

‘The Donald’, after all, is a man who advocates banning Muslims, who thinks it might be a good idea if Japan and South Korea had their own nuclear weapons and whose answer to our immigration issue is to build a $10 billion “beautiful wall” when our real problem is that 140,000 more Mexicans have fled back home than have come here since 2009. If that isn’t an indictment of our “recovery”, what is? Recently, Trump stumbled into saying that abortion should be banned and women who get abortions should be punished.

The shit of it is, Donald Trump isn’t the worst that could rise from the Republican swamp. His main contender, Ted Cruz, would swap Trump’s anti-Mexican wall for Gestapo-like brigades patrolling Muslim neighbourhoods, dressing the same fear and loathing in different clothes. Despite Trump’s bluster, he and wife Melania aren’t likely to accomplish much more than redecorating the White House to their tacky Vegas tastes – which is to say Donald Trump is far less dangerous and only slightly more preposterously styled than Kim Jong-un.

There’s a decent chance that this is all a big prank and Trump is really Banksy, laying bare for all to see the banal absurdity of the Republican party, where to remain loyal one must defend the indefensible on a daily basis: climate change is a Chinese hoax; torture is good policy; the poor aren’t pulling their weight.

These are indeed interesting times. When the news isn’t filled with stories of Trump supporters pepper-spraying teenage protesters, or his campaign manager getting charged with simple battery, we get stories of people ploughing trucks through gun-shop storefronts and making off with all the pistols and rifles they can grab in sixty seconds.

We’ve gone nuts: the kind of nuts that the likes of Joan Didion, Hunter S. Thompson and even Tom Wolfe could have made sense of. Instead, though, we live in an era of penny-ante narratives and global-media ghoulishness. The indecent images, the clipped sound bites, the ironic memes, the twenty-four-hour cable-news analysis that’s as nuanced as your basic Skrillex jam – it’s all just rubble strewn across the blast radius of our cognitive dissonance.

For thirty-five years, we’ve been waging a culture war started by cruel cynics who robbed us blind and scorched the Earth while we fought about abortion and marriage and which lives matter. Iraq War to ISIS. Fracking to polar ice-cap melt-offs. Subprime rip-offs to foreclosure. Trickle-down to regressive taxes. These are just some of the crimes that Corporate America has lined its pockets with while we lobbed lies at each other from the trenches of identity politics. Now the chickens are coming home to roost. We’re at a point where, as Yeats said, the centre can’t hold and mere anarchy is loosed upon the world. The best lack all conviction, while the worst are full of passionate intensity.

The view looks something like this. Wages have been stagnant since the late ’70s while rents have gone up seventy per cent in major metropolitan areas. Buying a house in a city whose seasons aren’t marked by tornadoes, floods or locust swarms has become the singular province of millionaires. More than half of Americans have less than a $1,000 cushion to sit on. The wealthiest one per cent owns nearly forty per cent of all private wealth while the 400 wealthiest Americans have more money than the bottom 150 million combined.

In America now, you’re either rich or scared. Scared like the 1,400 workers who for decades built – and built damn well – Carrier furnaces and heating equipment at a factory in Indianapolis that was responsible for more than a third of parent company United Technologies’ $7.6 billion earnings last year. United Technologies does nearly $6 billion worth of business with the US government, according to a recent New York Times story on this factory closing.

So, in effect, our tax dollars are subsidising the company’s abandonment of Indianapolis for Mexico where it can pay workers five dollars less per hour. You see, nearly $8 billion dollars in profit isn’t enough for shareholders. And Trump has missed no opportunity to use a video showing Carrier workers being sacrificed for “competitiveness” to excite anti-Mexican fervour.

Scared like a generation of young people saddled with $1.2 trillion in debt from usurious student loans, more than 7 million of whom are in default, all of which is carefully calculated to churn out cowed workers who will accept almost no end to their exploitation because they’ve been told they are damn lucky to have a job in this economy – the one in which corporate profits are at all-time highs.

Scared like the fifty-year-old new father who, two summers ago, found himself living in a rat- plagued sublet in a neighbourhood chosen for its proximity to his wife’s temp job. She needed somewhere to easily commute back-and-forth so that she could nurse their six-week-old daughter. And her work was important because that man, a respected practitioner in his field, had been relentlessly downsized while the fewer and fewer jobs available in journalism migrated to the young, the cheap and the compliant.

Not long ago, he’d made enough to afford a mortgage on a modest house. He wasn’t rich, but he could pay his bills, take care of his family, get health insurance and even save a little. Now, in the sixth or seventh year of the recovery – or so we’re told – he’s an itinerant, stringing gigs together to come up with half the income he’d made before the Great Recession.

That guy is me, and I believe the fear that struck me two summers ago is now so commonplace that it’s driving us to the crazy extremes playing out during this insane election. Demagogues like Trump egg on the fear and whip it into hate – a divide-and-conquer tactic that’s as old as the Civil War. Meanwhile, the saner of us watch and worry that the great American dream of ordinary people living productive lives free from the tyranny of economic persecution is so far gone that we don’t have a clue how to bring it back.

Joe Donnelly is a visiting professor of English and journalism at Whittier College, California.
This article originally appeared in Huck 55 – The Freaked Out Issue. Buy it in the Huck Shop now or subscribe to make sure you never miss another issue.
Enjoyed this article? Like Huck on Facebook or follow us on Twitter.

Linkedin
RELATED ARTICLES
OTHER ARTICLES
Activists and campaigners are fighting back against new laws that would seriously undermine the ability to take industrial action, calling it an attack on fundamental workers' rights.
A recent High Court ruling against the right to wild camp in Dartmoor National Park sparked the largest land protest in history – and campaigners say their fight is not over yet.
AI companies that develop image-generators using copyrighted artwork from the internet are coming under fire from artists who say that it amounts to theft.
Following the release of his debut single, Deyaz talks battling addiction, dealing with his struggles through music, and building a budding music career from his living room.
A new podcast is opening up the conversation between trans women and trans amorous men in the hope of building coalitions.
After blocking the Scottish government’s gender recognition reform bill, Westminster is now devising further changes to the law to make it harder for trans people to self-identify.