News & Politics / How do we break out of the echo chambers that got Trump elected? 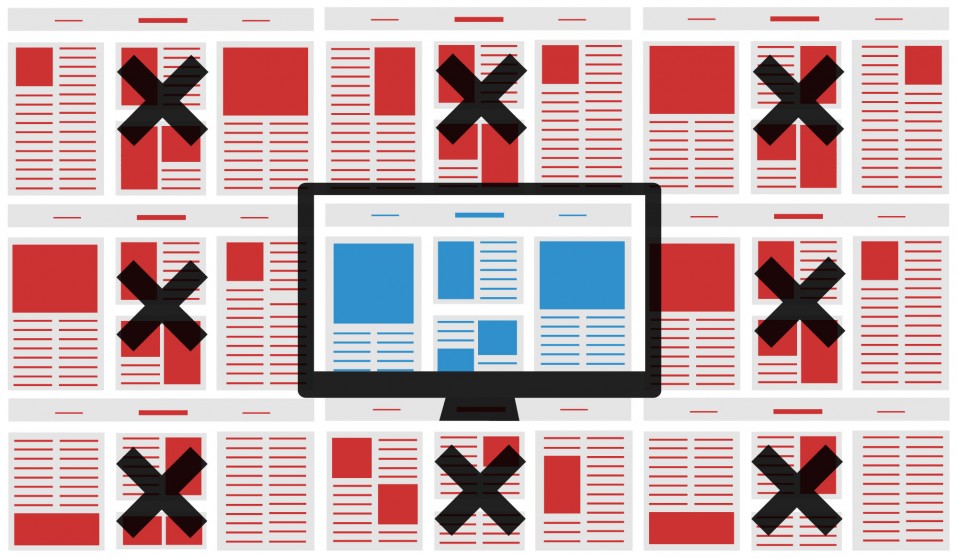 Outside the echo chamber

The world right now feels like a dangerous, hate-filled place, it's no wonder that we take to social media desperate to be surrounded by comforting voices we agree with. Dr Marta Zarzycka asks what this means for individuals and society at large in a post-Trump era.

The US presidential campaign has come to an end, leaving me bewildered about the social media bubble I have been living in during the 2016 campaign. Much has been written about that bubble – it has been denounced, ridiculed, blamed for the election result, or, conversely, reclaimed and reaffirmed by their inhabitants – the white, urban, college-educated middle class.

But assigning blame for the election result is a slippery slope. Rather, two weeks after the results have been announced, I want to take stock of the emotional fallout of the political spectacle that just unraveled. How can we distance ourselves from the emotional and sensational value of it, while at the same time not dismissing the potential of feelings and emotions? How can we live with, rather than overcome, loss, despair, or rage? How can we continue to expect these feelings to guide or maintain us going forward, when they have failed so spectacularly in the case of the election?

A lot of my regret these days is concerned with the emotional echo-chamber I built for myself with the help of social media. Facebook, my main source of information (and, sadly, affective encounters) these past months, emerged as a very significant news provider during the campaign: forty-four percent of all adults in the United States get their news from the service. Feelings ran freely on Facebook during the election: the presidential race generated over 5.3 billion Facebook posts, likes, comments and shares, with nearly more than a hundred million Americans participating.

Individual, volatile emotions became a sharable portent of political and cultural attitudes, generating emotional infrastructures that either comply with patriarchy, racism and xenophobia, or deploy feelings as “a form of against-ness”, serving progress and social change.

The company, fully aware of its power to emotionally trigger and mobilise its users, used a proprietary algorithm that micro-targeted audiences with personalised content about the election. Articles that were expected to generate emotional engagement were moved to the top of the feeds. Facebook compressed the possible affective responses to these texts and pictures into the icons of a heart, a smiley face, a sad face, etc….

The value of emotions as a sellable commodity in neoliberal corporate culture is undeniable, and has been quantified and measured extensively (Facebook itself has published details of an experiment in which it filtered users’ news feeds to enable a process of “emotional contagion).

Relying on feelings generated by election campaigns and partaking in them, I crawled further and further into insular online space in pursuit of comfort and reassurance—contentment, belonging, hope. I no longer bothered going to the home page of CNN or the New York Times, and certainly never Fox News. I just read stories and looked at the content that popped up on my news feed with the persistence of a Netflix viewing suggestion. There, emotions were hyperbolised through vivid facial expression, expansive bodily gestures and dynamic composition of the photographs, as well as the dramatic language of the caption.

In my pre-celebratory excitement, in my joy and anticipation, I disavowed other feelings that hardly surfaced on my Facebook feed: fear, anxiety, ambivalence, sadness that these were the only presidential choices American public faced. Even though I myself, a non-American citizen living in the US, could not vote and never went to the polls, never put on a pantsuit – I do not even own one – I did not allow myself to be affectively disconnected.

I eagerly clicked on clickbait stories that appealed to my emotional needs at the moment rather than those providing knowledge or demand reflection. I also read the links to newspaper articles shared by my Facebook friends (a multicultural group of academics and activists, of different sexual orientations but invariably college educated and left-leaning).

I perused unflattering images of Trump’s face distorted by anger, winced at shots of his puffed up hair, laughed at the gifs on Jezebel or BuzzFeed, admired the witty rhetoric of New Yorker cartoons, and enjoyed the satire of Saturday Night Live sketches—all suggested to me by Facebook. Without putting in the extra effort to venture to the other side, I used Facebook to reinforce my affective biases, sooth my anxieties, and encourage my self-contentment.

In my emotional bubble, I hardly acknowledged that the red feed was just as emotionally slanted towards the Republican candidate as the blue was towards the Democratic one, that it catered just as much to emotional shortcuts and templates, full of affects that polls were unable to measure.

The items that generated affective engagement in the weeks leading to election were links to quick-hit stories, often with incorrect or exaggerated information, sparking indignation, disgust, anger, or envy – like pro-Trump news sites, most of which were aggregated or completely plagiarised from other fringe and right-wing sites in the US.

Just like my feed, Trump’s campaign has relied on feelings and emotions and served them up to social media users. Only after the results were announced did I acknowledge how overcome with emotional vitriol (and now celebratory hatred) that feed has been. “Fuck your feelings” – an unofficial slogan of Trump campaign, visible on the t-shirts, banners and bumper stickers of Trump supporters, acts to dismiss what the right wing reads as neoliberal sentimentality and “soft” political correctness, reaffirming “hard” feelings like “pride” or “nationalism.”

Protecting myself from these emotions, I made my bubble even more insular ‘unfriending’ a few people who were vocal in their resentment of Hillary Clinton. This politically motivated ‘unfriending’, massively practiced during and since this election, has only heightened the divisiveness of social media.

I no longer saw uncomplimentary pictures of Hillary Clinton or scathing statuses about her on my feed. I did not look for them, and, apparently, they did not look for me.  All in all, my politics has been self-identified, my experience of the presidential campaign has been skewed to be emotionally enhanced.

Nowadays, in post-election reality, at the dentist office or at the airport, I feel exposed—practically skinless—watching TV footage of the newly elected president shaking the current president’s hand, or his supporters rejoicing in the streets. I feel like the news is out to get me.

I miss the safe space of my Facebook feed, and I want to go back there, even though other feelings took over my Facebook feed: despair, loss, outrage, shame. But, just as before, my communities of political and affective belonging extend at widest to The New York Times, Jezebel, The Pantsuit Nation Facebook page. Just as before, I carefully emotionally curate my news and my groups, unable and unwilling to acknowledge for joy, pride and nationalism of Trump supporters.

Although the cultural canon still seems to prefer “higher” emotions, such as hope, pride, and happiness, I partake in online expressions of anger in Facebook groups such as I am Still with Her, framed here as a legitimate driving force against the systemic violence of racism, sexism, or economic inequality.

At the same time, I rejoice in groups such as Pantsuit Nation which suggest that love is able to effortlessly transcend political identities; selfies and first-hand stories by the members of sexual, racial and ethnic minorities continue to displace politics into the realm of affective relationships with self and others.

Love and kindness as a political strategy and transformative force are contagious— these post generate millions of likes and encouraging comments. They are presented here as crucial to the promise of cohesion within a “American community,” of disruption of dominant political discourses and social imaginaries, bonding others in relation to an ideal which takes shape as an effect of such bonding, albeit also designating others who have failed that ideal.

But it only takes one click of the mouse to acknowledge that the same emotion, love, can be deployed culturally and politically to assimilate and neutralise subordinate subjects and to abide with heteronormative, patriarchal and imperialist values, as the nationalist posts of Trump Supporters, and the campaign logo “Make America Great again” demonstrate.

Numerous hate groups, mostly rightwing fascist groups, call themselves organisations of love (for the country, for the past, for the white supremacy), engaged in the reproduction of national/racial/religious identity.

American disaster scenario has left me questioning my feelings. How to take the feelings we have now – joylessness, depression, despair, disgust, grief – and share them as a way of organising in the post-democratic era? Is it even possible? How to turn emotions into active refusal, into generative action, not short-circuiting again within our own, comfortable worldview?

How not to turn post-election minimal signs of careful hope (“It will not be as bad as we fear”) into complicity? How to acknowledge these “bad” unsettling affects that are a part and parcel of Trump’s discourse without dismissing them as less powerful than our feelings?

Dr Marta Zarzycka is currently Visiting Scholar at the Center of Women and Gender Studies at The University of Texas at Austin. Her current book-length project, entitled Gendered Tropes in War Photography: Mothers, Mourners, Soldiers has just been published by Routledge.

Linkedin
RELATED ARTICLES
OTHER ARTICLES
After fleeing the war in Ukraine, people are finding it impossible to secure affordable and decent housing in the UK.
The pro skateboarder withdrew from the 2020 Olympic Games so he could come out as trans. Now, he’s hoping to encourage others to live as their authentic selves – within the sport and beyond.
Jeffrey Henson Scales intimate portraits and protest images of the BPP and its leaders offer a rare insight into organisation at a time of societal upheaval.
A new film from Berghaus traces the story of Adam Raja, who left behind a turbulent upbringing to discover the healing power of climbing.
Zsófia Sivák’s ongoing project documents the country’s tavern culture, preserving a once defining part of rural life.
Campaigners reflect on what the supreme court’s decision to allow buffer zones in NI means for the future of reproductive rights in the UK.