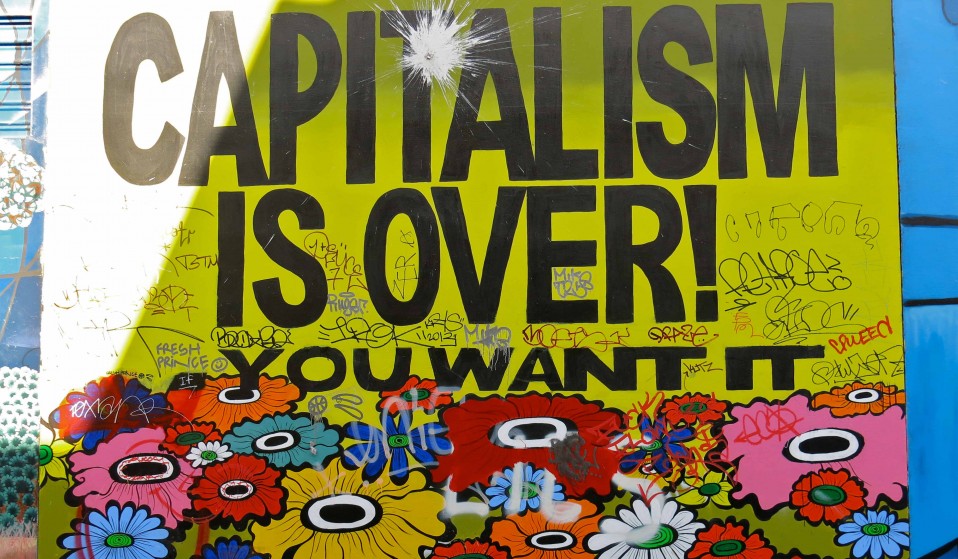 Photography © "Capitalism Is Over! If You Want It," mural by Megan Wilson, San Francisco, CA.

Paul Mason’s provocative new book offers a terminal diagnosis of the current order and argues the building blocks for a postcapitalist future are all around us.

Paul Mason’s provocative new book offers a terminal diagnosis of the current order and argues the building blocks for a postcapitalist future are all around us.

There aren’t many economics professionals who have emerged from the financial crisis with their integrity intact. One is Greek economics professor and Syriza MP Yanis Varoufakis who dared to point out the flawed logic underpinning the Eurozone’s approach to Greece’s economic crisis – and rocked an infamously jazzy shirt to parliament when he was threatened with treason charges for doing so.

Another is journalist Paul Mason who as Channel 4 economics editor sports a more restrained wardrobe, but went viral when he lost his temper outside RBS headquarters and despaired at why no bankers have been prosecuted, despite multiple scandals and evidence of wrongdoing. He also wrote the foreword to the UK edition of Varoufakis’ brilliant analysis of predatory capitalism The Global Minotaur.

Both men argue that fractures in our economic system are so great that capitalism in its current form is doomed. And climate change is adding fuel to the fire. What we’re witnessing in Greece and elsewhere is an existential crisis, playing out in slow motion before our very eyes and leading to inevitable collapse.

Mason’s new book Postcapitalism: A Guide to our Future, offers a terminal diagnosis of the current order and a glimpse of what a new world might look like – and its seeds are already visible around us.

The rise of information technology has pushed capitalism beyond its capacity to adapt by dissolving markets, destroying ownership and breaking down the relationship between work and wages. As stagnation leads to social crisis, armed conflict and the erosion of democracy, a more dynamic force will emerge to reshape the economy around new values.

“By creating millions of networked people, financially exploited but with the whole of human intelligence one thumb-swipe away, info-capitalism has created a new agent of change in history: the educated and connected human being,” he writes, who will use parallel currencies, time banks, cooperatives and self-managed online spaces to build a postcapitalist world.

But with capitalism’s ability to evolve and save itself – regardless of the human cost – can the forces Mason champions usher in a new era?

Here are five contemporary examples of the movements he argues could form a blueprint for things to come.

The Brixton Pound and parallel currencies 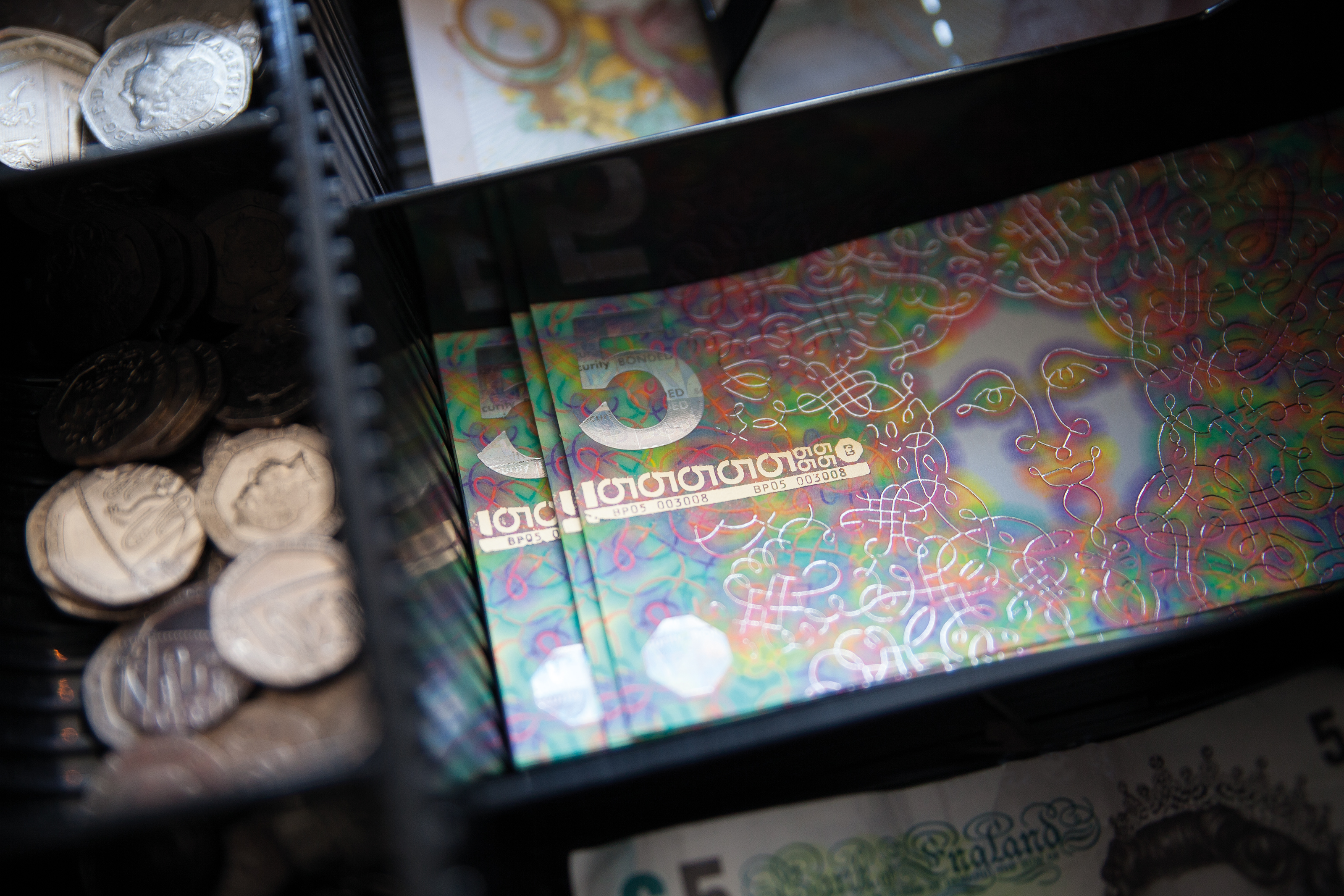 They say money is the root of all evil, but how can that be true when you’ve got Bowie or black radical activist and community organiser Olive Morris on the banknotes? The Brixton Pound in South London is just one of many examples worldwide of a community-run parallel currency that aims to support local businesses through increasing the money supply and encouraging people to spend in their neighbourhood. The Brixton project has grown steadily since its launch in 2009 and shown that a community can come together to participate in shaping the economy to meet its needs.

Wikipedia and the rise of self-managed online spaces

When was the last time you saw an encyclopaedia? Upsetters Wikipedia have destroyed the old model of profiting from information by locking it away and charging people to access it. Wikipedia not only allows anyone to read for free, but its open editing has allowed it to grow faster than a commercial operation ever could and its advertising-free setup is believed to deprive the ad industry of $3 billion per year. See also: Wikileaks who are using open source principles to revolutionise access to information and hold governments to account.

Mondragon and the future of cooperative working

Traditionally, co-operatives have failed because of their lack of access to capital and their inability to restructure the workforce to cope with crises. Spain’s Mondragon however is the largest cooperative in the world with an annual turnover of €14bn and is interwoven with local savings banks. It even has its own university. Mondragon avoided laying-off workers during the crisis by moving them around between different sectors and softening short-term reductions in hours with non-market perks.

But Mason argues true postcapitalist collectives would go much further. “It is not enough for them to be just non-profit businesses; the postcapitalist form of the co-op would try to expand non-market, non-managed, non-money based activity against the baseline of market activity it starts from,” he writes. “ What we need are co-ops where the legal form is backed up by a real, collaborative form of production or consumption, with clear social outcomes.”

Utrecht, basic income and the separation of work and wages 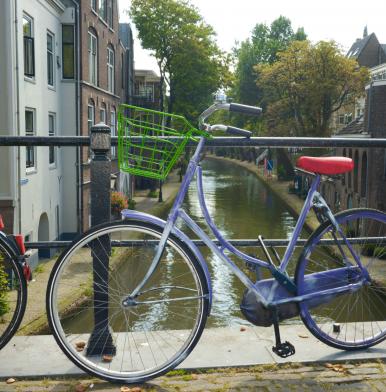 As well as being a cyclists’ paradise, the Dutch city of Utrecht recently launched an experiment with the basic income by offering all citizens an unconditional sum to help cover living costs. After a recent study in 18 European countries concluded that generous welfare benefits make people more willing to work, rather than less, Utrecht launched the limited programme in the hope that it would help alleviate poverty and social exclusion.

Mason proposes using the basic income as more than just a welfare reform, he hopes it will “formalise the separation of work and wages and subsidise the transition to a shorter working week, or day, or life.” He hopes it would “give people the chance to build positions in the non-market economy. It allows them to volunteer, set up co-ops, edit Wikipedia, learn how to use 3D design software, or just exist.” 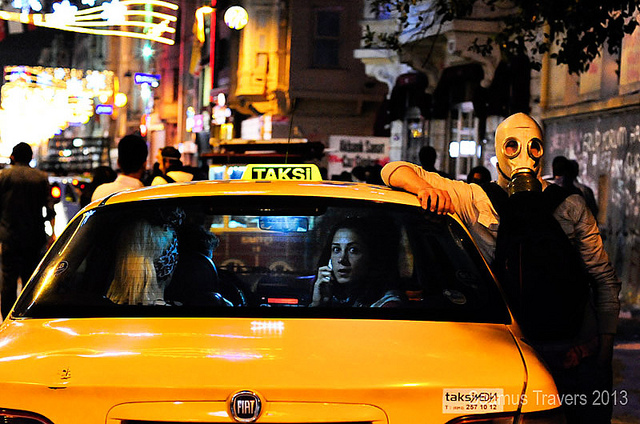 Mason uses the example of the Gezi Park protests in Istanbul in 2013 to demonstrate how when people come together around a uniting idea, sale-for-profit goes out of the window, while sharing and cooperation come to the fore. He recalls the mountains of food that were donated by supporters to help maintain the camp, which also happened with Occupy and the Indignados, who, like the Gezi protestors, offer examples of non-hierarchical political structures on which the new economic order will be built.

Mason argues that the rise of technologies like 3D printing have reduced the costs of manufacture so much that they’re almost negligible. When information, manufacturing and machines are free, this ends the scarcity, or the conflict between supply and demand, which establishes prices in a market system. When capitalists can no longer maintain artificial scarcity, new forms of collective production and distribution of goods will have to emerge to deal with a world in which everything is free.

Paul Mason’s Postcapitalism: A Guide to Our Future is out now, published by Allen Lane.

Posted Saturday 15th August, 2015
Text by Alex King
Photography © "Capitalism Is Over! If You Want It," mural by Megan Wilson, San Francisco, CA.

Linkedin
RELATED ARTICLES
OTHER ARTICLES
A new podcast is opening up the conversation between trans women and trans amorous men in the hope of building coalitions.
Filmmaker Laura Poitras discusses her new documentary which traces the remarkable life of the artist-activist and the impact of her battle against the US opioid crisis.
Activists and campaigners are fighting back against new laws that would seriously undermine the ability to take industrial action, calling it an attack on fundamental workers' rights.
After blocking the Scottish government’s gender recognition reform bill, Westminster is now devising further changes to the law to make it harder for trans people to self-identify.
Photographer Sean Maung reflects on documenting a small town in Pennsylvania afflicted by high levels of unemployment, poverty, violence, crime, and addiction.
As she gears up for the release of her first book, the 24-year-old climate activist talks standing up to authority and building a more inclusive movement.