News & Politics / For abortion clinic workers, the fear of violence is constant 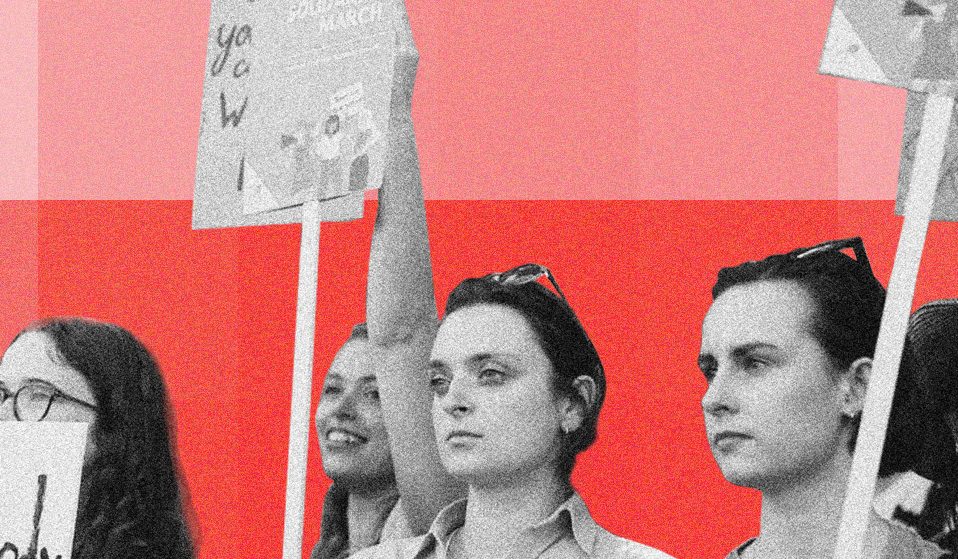 A 37-year-old woman shares how her abortion led her to become a clinic worker, and the abuse she’s received in that role.

A 37-year-old woman shares how her abortion led her to become a clinic worker, and the abuse she’s received in that role.

Two months on from the Supreme Court’s decision to overturn Roe v. Wade, the landmark ruling which granted the right to an abortion for nearly 50 years in the United States, abortion is now illegal or heavily restricted in at least 14 states.At least eight other states have laws in place that pave the way to quickly ban or severely restrict access to abortion.

Kelsea McLain, 37, has had three abortions and is a clinic escort in North Carolina, as well as Deputy Director of the Yellowhammer Abortion Fund – a reproductive justice organisation that serves Alabama, Mississippi, and the Deep South. She has faced a barrage of harassment from anti-abortion activists after sharing her abortion story and for her work supporting others to have abortions. She reflects on her abortion experience, how she feels about the reversal of Roe v. Wade, and the fightback.

I’ve had three abortions. My first happened right after I graduated from college when I was about 24. I was unemployed, I was in a long-distance relationship, and I was struggling to find work in that really difficult economy that I graduated into in 2009.

I returned home from a trip to visit my partner in Texas – I was living in Florida at the time – and I was pregnant. It was really bad timing; I just did not have the material resources I needed to be ready to parent. I chose the medication abortion, and while I was going through the process of bleeding and passing that pregnancy, I was having to move out of the apartment that I had held, because I couldn’t afford it, and I moved back home with my mother.

My health insurance wouldn’t cover my abortion, so I had to pay for it out of pocket. I called a local clinic and found out it would be about $500 (£412), and that was more than I would ever have in my bank account at any given time based on my unemployment salary, which was around $800 (£660) a month to maintain my apartment, pay all my bills and everything. So that’s why I lost my apartment. I knew that I would never be able to afford [the abortion]. So I first turned to ways I could potentially end my own pregnancy with the use of herbs. I certainly am not a herbalist and I didn’t consult one. But what I tried didn’t work, it made me feel sick.

I decided finally to loop in my mother and my boyfriend at the time, who were both incredibly supportive. It was really hard for me to do that because I just had this really screwed-up idea that abortion was my burden, that this pregnancy was my fault and I needed to be the one to deal with it. And that was mainly just rooted in the fact that I wasn’t taking birth control, and I was really critical of myself for that. But once we figured out about abortion funds, I was able to get the help I needed. I had the abortion. It was really no big deal. The most difficult thing I dealt with after that abortion was the guilt of not feeling guilty.

After my abortion, I had time to process it, and I was really incensed both at the protester presence outside of my clinic and just that it wasn’t easier – it literally took me weeks and endless heartache and stress just to get to the clinic. That led to me actually working for a provider and getting involved in clinic escorting, which is basically where you organise folks to hang out in front of a clinic, greet patients and get them into the facility past protesters. We do that in two facilities in North Carolina, one in Raleigh and one in Durham. Through that activism, I really became an accidental abortion storyteller. And because we have a really dedicated and concerted protester presence in front of our clinic, I became their number one target.

The harassment has been pretty much constant. But since the Roe v. Wade decision, there is a new guy that I discovered, a Facebook profile out of Florida, and they have screenshotted multiple things from my personal Facebook profile, and also several of my friends’ Facebook profiles, talking about how we’re evil, how we have no morals and no souls and we are who the community should be on the lookout for because we are very dangerous, evil people.

There’s always a concern that this harassment could lead to violence. I know that these folks are very unpredictable. We had a guy actually shoot himself in the leg in front of the clinic during an escort shift.

I’ve had people do things like show up at city council meetings that they knew I would be at and they brought giant posters featuring pictures of me to try and humiliate me in front of the city council.

It was really devastating when Roe v. Wade was overturned in June. I supported our abortion access hotline as our primary case manager in the lead-up to that. I know what it meant for all of the people who were literally scheduled for appointments the next day. And all of the people who were depending on organisations like us that were facing an uncertain future, which currently have shut down. We have paused our abortion fund and travel support, which we used to do to the tune of tens of thousands of dollars a month.

It’s just a matter of first analysing the legal risks, and seeing what happens over the next several months. And then [the organisation] will challenge those laws, because we are not just going to sit back and allow unjust things to go on. We have reopened our call line, so we’re there just to provide moral support to people as they go through the challenges of trying to access care out of state.

I know how rampant maternal and fetal mortality is, and the states that outright criminalised abortion on day one are the states that are killing the most mothers and children in childbirth, including Black mothers and children. The idea that we as a country haven’t figured out how to just protect people when they want to start and grow their families in the best way possible is completely embarrassing and heartbreaking.

Roe v. Wade was really an imperfect way to protect abortion access in this country. It did not go even a smidgen far enough to really do what we needed to protect access in this country. I experienced working for an abortion fund in Alabama, which is a giant state with only three clinics, and what I experienced living here in North Carolina and seeing how even in a really well-resourced state people can struggle to access that care, like Roe just made sure abortion clinics could be open, but it did nothing to ensure that you could access that care.

So I really am hopeful for a future where we have actually affirmed that abortion access is a human right. And because it’s a human right, like health care, it’s not something that you can be denied or turned away from due to a lack of resources. But it will mean that the Democrats, who I’m very angry with right now, will have to do more than use abortion as a bargaining chip for elections.

This interview has been edited for clarity and brevity.

Linkedin
RELATED ARTICLES
OTHER ARTICLES
In his 2008 series, the photographer pictured himself as Angela Davis, Martin Luther King Jr., Malcolm X, and other prominent figures.
Following the announcement of an 80% hike in the energy price cap from 1st October, crowds gathered outside the offices of energy regulator Ofgem to protest and declare their intention to undertake a payment strike.
Financial turmoil is pushing people who work in the sex industry into more dangerous and desperate situations as a means of survival.
Rhiannon Adam spent three months capturing an ageing society wracked by division, isolation, and the aftermath of scandal.
Thousands attended the annual event this year to wheelie through the city and call for ‘knives down, bikes up’.
Yesterday thousands gathered outside Buckingham Palace after news of the Queen’s death broke.