News & Politics / What does the future hold for young people in Greece? 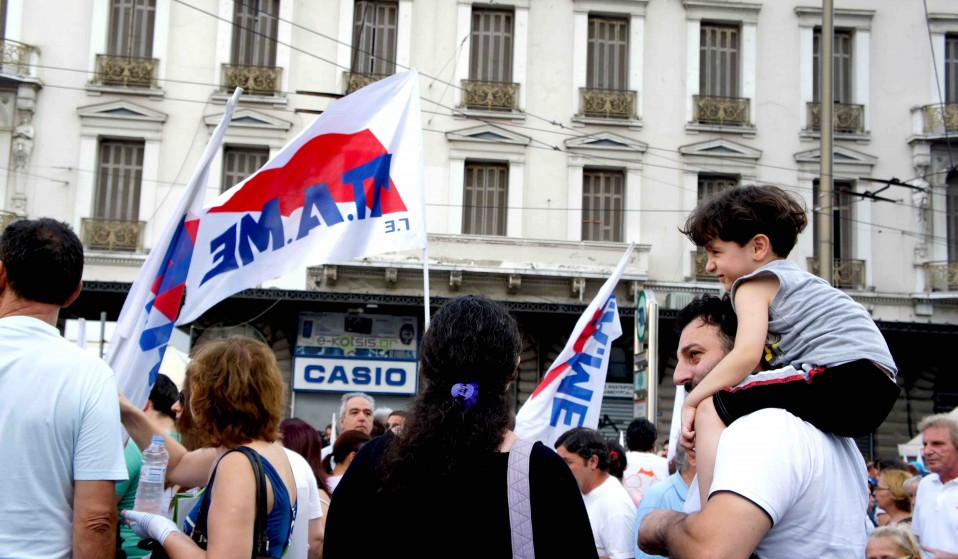 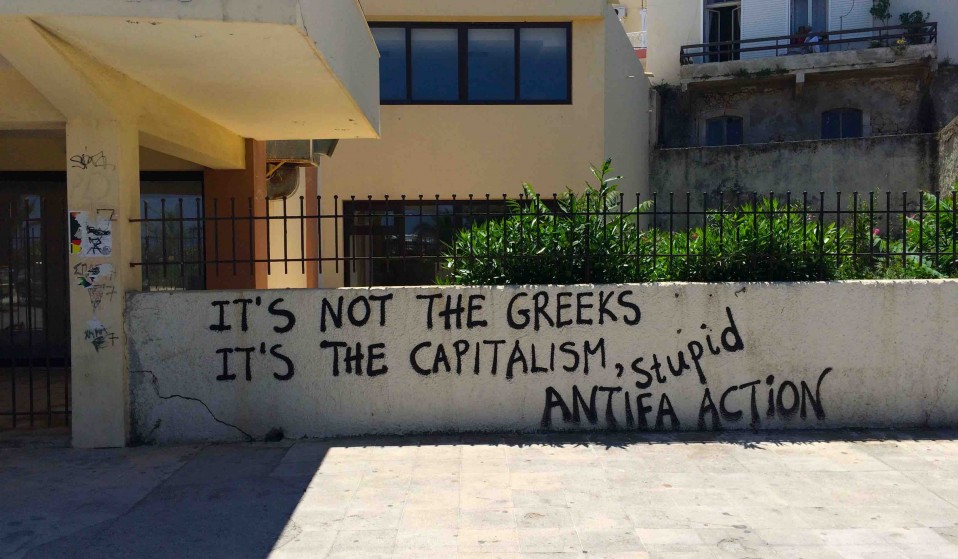 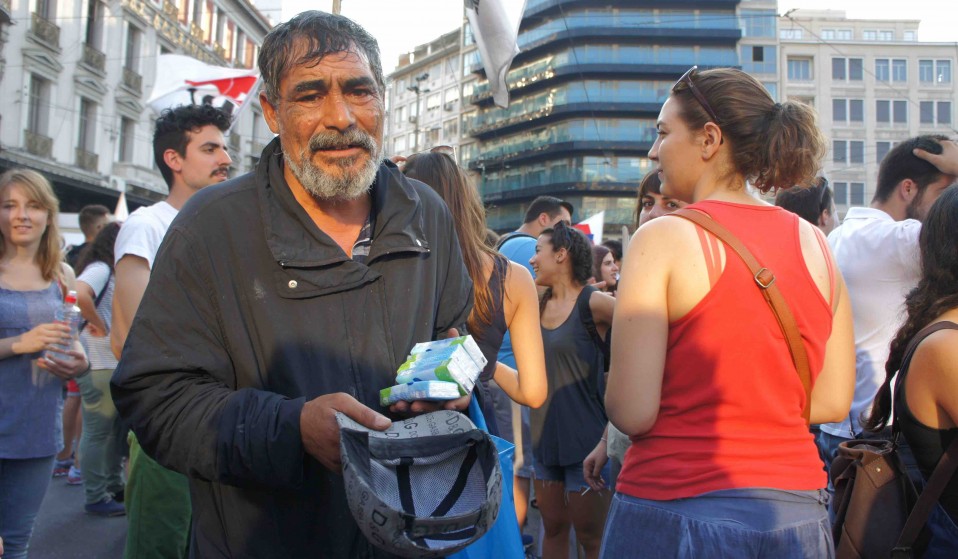 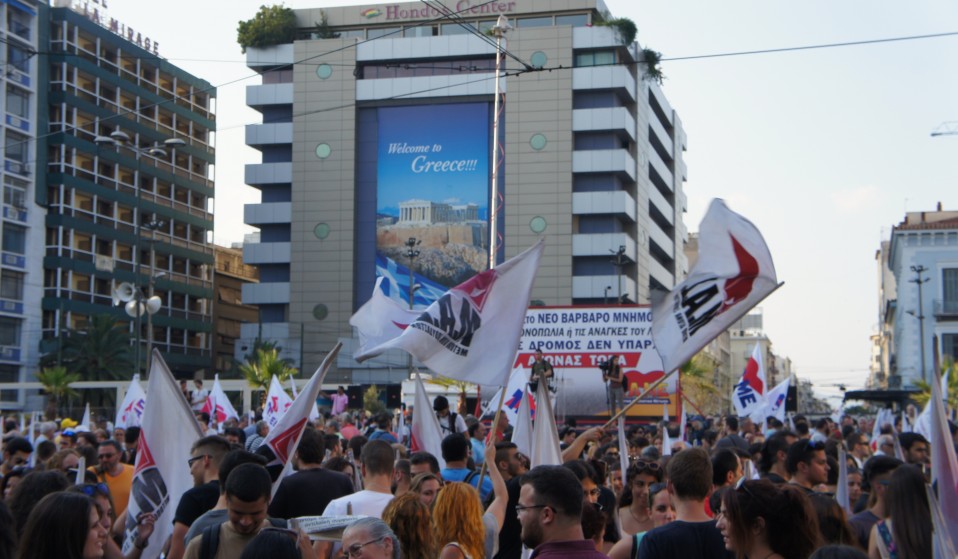 As the economic crisis deepens, Huck heads to Athens to meet the protesters of Omonoiea Square, and the waitresses serving tourists on nearby Crete, to get a feel for what the future holds for young Greeks.

As the economic crisis deepens, Huck heads to Athens to meet the protesters of Omonoiea Square, and the waitresses serving tourists on nearby Crete, to get a feel for what the future holds for young Greeks.

“If I find a job in Norway, I will stay and never come back,” Afroditi told me as she spread the tanning oil over her brown, gleaming arms and shoed away a honey bee. The Mediterranean sea stretched in front of her: cool, clear emerald water that faded to a deep azure. Her pre-work hours on a pristine pebbled beach in Sfakion, Crete were idyllic. But she longed to use her master’s degree, for a job where she did more than dole out Cuba Libres and Raki shots to parched tourists between karaoke songs.

It was July 17, and the uncertainty surrounding Greece and its place in the European Union was making people skittish. Businesses in the islands stopped taking credit cards. “Euros only,” they said.

In Athens, some ATM lines stretched down the sidewalk as people chomped at the bit for their daily withdrawal limit of €60, a mandate aimed at staving off a run on the banks. People held their breath a little as they approached the cash machine, wondering if today was the day the banks would run out of money.

As the summer wore on, the problem wasn’t outright deprivation, but the haze that settled over the horizon. Dreams for the future, even the humble and mundane, began to turn brittle and dry under the hot summer sun.

“You cannot improve,” Georgia Votzaki told me in between shifts as a waitress at a beach resort in Crete. “It’s difficult to make a family, to own something, to get a degree. The daily needs? Ok — you can have everything. But your future is more difficult.”

On July 15, under threat of seeing Greece ejected from the Eurozone, Prime Minister Alex Tspiras and Greek MPs voted to accept dramatic austerity measures that a majority of Greeks had voted against the week before.

That same week, thousands of Athenians gathered in in Omonoiea Square to protest the austerity measures, the Eurozone and the Greek government. The cuts were a slap in the face to the many Greeks who had relied on pensions and other government functions and programs.

“How will my children live?” Constantinos Kavorilis asked me as he marched behind his wife and their two toddlers.

“I work in the private energy sector and I saw a big cut in my salary over the last three years,” he said. “We cut from everything. We live in a smaller house, we buy less. I haven’t taken a vacation in the last three years — and I’m one of the lucky ones.”

Others simply said they had lost their faith in capitalism all together.

Nick Sfantos said his dry cleaning business had been sucked dry by the economic crisis.

“Last year we had 30 to 40% less business,” he said. “We reduced costs, but you can’t do that forever … If we keep paying this debt, we Greeks won’t be able to live our lives,” he said.

“My generation, we are never going to take a pension,” economics student Mary Dhorou told me. Dhorou’s mother had been laid off days before during the bank shut downs. “I don’t want to die at 55. I want to be able to feed myself and my children.”

But other young Greeks said their only hope was for the country to keep and grow its tourism industry.

“Don’t ask me questions about what’s going on in Greece,” Manousos pleaded with me from behind the resort reception desk. “I’m 22-years old and I don’t know anything.”

Manousos, who works as a shepherd alongside his father for part of the year, said he wanted to continue to work in tourism. But he feared that the government could slaughter its prized cash cow with ineptitude and dysfunction.

“I like the tourists — those people who say, ‘I like it here. I love the people. I love the food,’” he said. “But the Greek, we don’t see it. We don’t see what we have in our hands… With a government like this, we are not going anywhere. We will lose tourism, too.”

I went to Greece looking for all the usual things: sun and beaches and the opportunity to snap photos in front of a few ancient rocks, that, with a little imagination, would remind me of a time, a couple thousand years ago (give or take), when a proud Greece called the shots in the western world — not the other way around.

The day I arrived, I stuffed my wallets with Euros at the airport and headed to the Acropolis at dusk. Leading to the apex of the city’s central hill, the great white marble steps shined smooth from the beatings of a million feet.

Up top, the giant temple was covered in chintzy scaffolding that bolstered its elegant lines. It looked like the same scaffolding I had seen five years earlier — like a set of crutches under an elegant lady dressed in a white evening gown. She looked tired, but not yet willing to give up.

Linkedin
RELATED ARTICLES
OTHER ARTICLES
The Greek crisis has pitted people against the “laws” of economics. Documentary Money Puzzles exposes the myths at the foundation of neoclassical economics and goes in search of the reality on the streets of Athens, Argentina and the City of London.
Street artist Bleeps.gr was making street art long before the economic crisis hit Greece. But with the social and cultural impact of the nation's turmoil, his art has reflected the changing views of the dissatisfied voices he comes into contact with. His identity is anonymous, but he won't stay quiet.
Stanley Schtinter’s symposium of film at London's Whitechapel Gallery responds to the experiences of the Greek people since the 2008 global financial crisis.