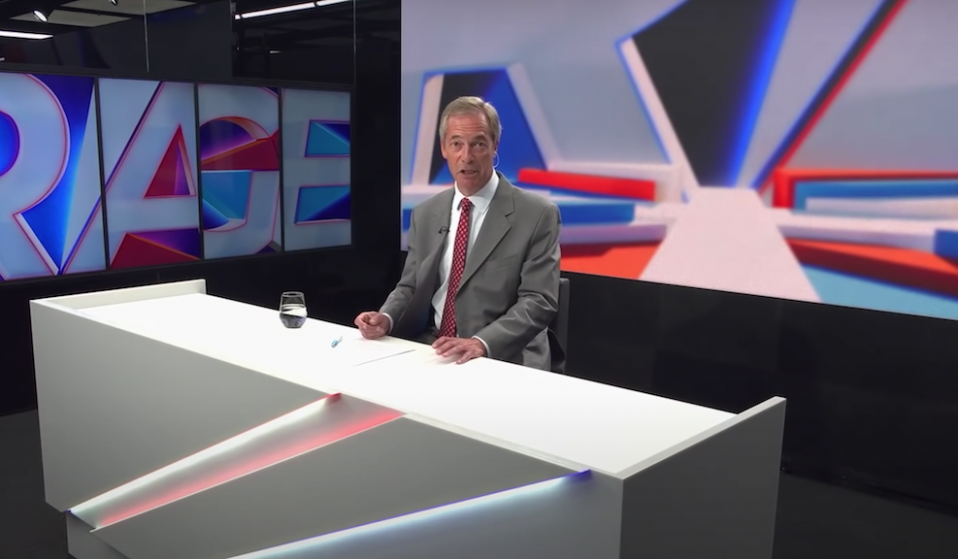 The channel may be in crisis already, but its eerie similarity to the beginnings Fox News suggest that its threats should not yet be overlooked.

The channel may be in crisis already, but its eerie similarity to the context in which its US-counterpart Fox News emerged suggests that the threats it poses should not yet be overlooked.

The latest scandal at British right-wing start-up news outlet GB News has seen the resignation of a senior executive and a presenter being taken off air for taking the knee in an expression of solidarity with the English football team. The audience rating for some programmes has now fallen to zero viewers and there is much talk of crisis at the fledgling channel.

Yet, however much we may be tempted at laugh at its misfortune, GB News is just the latest experiment in partisan, conservative content that may have more serious implications for the news landscape. In fact, all this may seem eerily familiar to observers of the controversial American cable network Fox News Channel.

GB News, which was founded as the "free expression" news channel, has an announcement pic.twitter.com/gupKY3zYES

When Roger Ailes, the former chairman and CEO of Fox News, first launched the controversial network in 1996, as with GB News more recently, he did not invest in expensive sets like those of his direct competitors. As documented in Gabriel Sherman’s eponymous book on Ailes, The Loudest Voice in the Room, the channel instead leased space that had previously been a record store.

According to Sherman, it could only accommodate two studios, shared between the channel’s eight shows, which had to “ping-pong” back and forth between them. To make matters worse, the New York subway ran directly under the building. It disrupted satellite signals and was noisy in a way that was difficult, if not impossible, to cancel out in the studio. But two chairs and a plant, as Sherman puts it, were much cheaper than the alternative, and Rupert Murdoch, notorious press baron and the owner of the network’s parent company, News Corp, had already invested a cool $100 million or so into the project.

For Ailes, the cheaper sets represented not just a reduction in potential costs, but also a chance to appeal to a different demographic than might have typically tuned into more established channels, such as CNN or one of the traditional broadcast networks. Ailes wasn’t looking to appeal to the coastal elites and city dwellers that MSNBC, a collaboration between NBC and Microsoft that launched shortly before Fox News and is widely considered to be its left-wing counterpart, was targeting. Ailes wanted to attract working class conservatives, who felt overlooked and alienated, both by the news networks and Democratic politics (Bill Clinton was the incumbent President at that time). According to Sherman, shortly after hiring Ailes, Murdoch spoke about “a growing disconnect between television news and its audience”, and an “increasing gap between the values of those that deliver the news and those that receive it”. Ailes aimed to fill that gap.

This is a similar context to the emergence of GB News with its cheaper, stripped back-style of set design, and right-wing and “anti-woke” diatribes. In his opening monologue on the channel, presenter and network chairman Andrew Neil put forward a similar thesis to that of Murdoch, claiming that other news channels have been infected by a “wokeness” that inhibits their objectivity and censors conservative viewpoints.

When Fox News launched, it also faced a volley of criticism and widespread doubts about its ability to thrive or even survive in the television news landscape of the time. And over the years, it has been subject to countless studies detailing its – at times extreme – right-wing bias and ideological fervour. GB News has already experienced similar critiques, both before and after its launch, with many commentators questioning its ability to survive, especially following the technical glitches that plagued its launch, and doubting its claims of objectivity. There is a strong undercurrent of defensiveness that can be detected in GB News’ responses to this criticism that belies a lack of confidence, perhaps, in their repeated claims that they have set out not to create an ideologically biased channel but one that is “fair and balanced”, to borrow a phrase familiar to early Fox News devotees.

Ailes, a former Republican political operative, who understood the power of television and its ability to influence elections in a way that not many others did, argued that Fox News would be objective and claimed that the existing networks leaned to the ideological left. The Fox News motto was “we report, you decide”. The reality was very different. Driven by Ailes, Fox News attacked Barack Obama and promoted Donald Trump, handing the latter softball questions and even talking points, on occasion.

And over the years, the network’s prime-time line-up has been increasingly subsumed by opinion shows, leaving little room for hard news, if any at all. The network champions conservative values, Republican political candidates, and right-wing ideologies embedded with racism, sexism and transphobia. Until recently, news anchor Shepard Smith represented a lone holdout against ideological bias on the network, championing objectivity and traditional news values, until even he departed to CNBC.

Whether GB News has the ability, the finances or even the desire to become a British version of Fox News remains to be seen. Roger Ailes’ vision for Fox News was successful in part because he correctly identified a gap in the news market and sought to fill it. The network came of age in a country that had largely rejected attempts to regulate the content, if not the underlying infrastructure, of broadcast news. And, perhaps most crucially, it exists within a news landscape that is used to the tabloidisation – or ‘Foxification’ – of broadcast news, whereas the British sensibility is often quite different in this regard.

Trying to import America’s culture wars – which are often not to similar to our own – will be far from a straightforward proposition. The same goes for the shabby sets which may appeal to the more frugal sensibilities of disenfranchised audiences, or collapse under the impression that their viewers aren’t seen to be worth the expenditure on a more professional product.

Could a network like Fox News even survive in the UK’s regulatory environment? Section five of the Ofcom Broadcasting Code states that “news, in whatever form, [should be] reported with due accuracy and presented with due impartiality”. “Due” is the particularly important word here as, according to Ofcom, while programs and channels cannot favour one side over another, they do not have to give an equal division of time to every view, nor do they have to represent every facet of an argument. Context, therefore, can be crucial in how the code is interpreted and applied. Politicians cannot be used as newsreaders or interviewers, unless “editorially justified” and their political allegiances must be made clear to the audience. However, unlike in previous versions of the code, the owner’s agenda and potential influence over content is not mentioned. In other words, there’s a lot of wriggle room.

In the US, the Fairness Doctrine occupied a similar role to Ofcom’s Broadcasting Code until it was eliminated by the Federal Communications Commission (FCC) in 1987, although the more limited equal-time rule, which requires broadcasters to treat candidates equally when selling or giving away air time, remains in force. The Fairness Doctrine specified that the holders of broadcast licenses were required to make space to discuss controversial issues of public importance, and that they should do so in a manner that was honest, equitable and balanced. This was intended to ensure that viewers were exposed to a diverse range of viewpoints and its demise is widely blamed for contributing to the increased polarisation of American politics over the last few decades.

It’s likely that had it continued to exist, it would have represented a challenge to Murdoch and Ailes’ vision for a partisan news operation. The question for UK viewers is whether Ofcom’s interpretation of “due impartiality and due fairness” will allow GB News the same opportunity to air right-wing voices and arguments without an appropriate response and what, in turn, its impact will be on British politics.

This research is part of the UK component of the Media Influence Matrix, set up to investigate the influence of shifts in policy, funding, and technology on contemporary journalism, funded by the Joseph Rowntree Charitable Trust. It is due to report in Autumn 2021.

Linkedin
RELATED ARTICLES
OTHER ARTICLES
The photographer reflects on building trust with his subjects and using the street as his studio.
In the UK, Hongkongers are continuing to stand in solidarity with the pro-democracy movement.
From Brooklyn gang members, to Welsh miners and the residents of East Harlem, Bruce Davidson used his camera to shine a light on the most marginalised.
In Sheffield, food delivery drivers are fighting back against one of the giants of the gig economy.
The musician, DJ and founder of Monika Enterprise reflects on a career defined by revolution and rule-breaking.
While the popular news aggregation service has been kicked off Twitter, its demise does not spell the end of digestible misinformation.