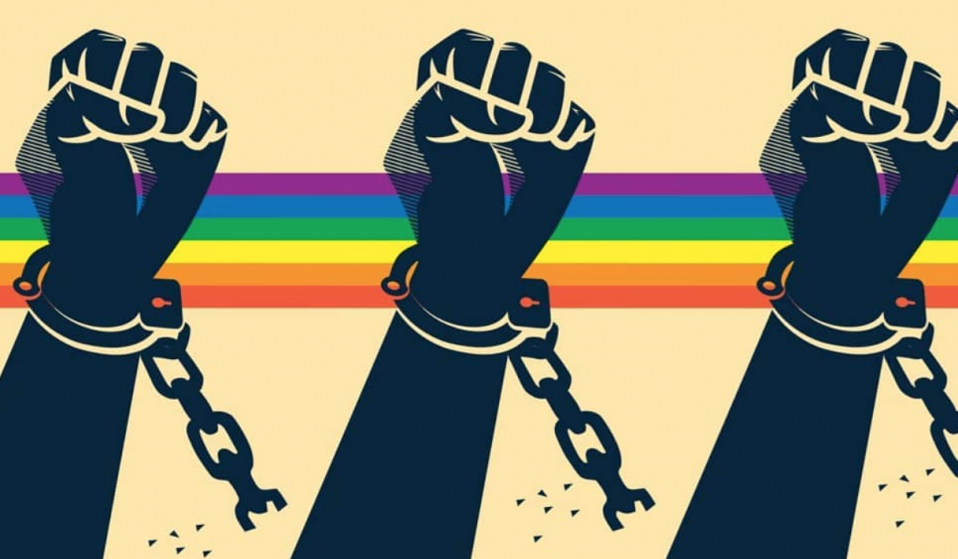 The attacks on queer Ghanians have culminated in proposals for a terrifying new bill which threatens to criminalise homosexuality.

The attacks on queer Ghanians have culminated in proposals for a terrifying new bill which would make identifying as LGBTQ+ a criminal offence punishable by up to 10 years in prison.

In February of this year, a newly-opened resource centre and safe space for LGBTQ+ people set up by LGBT+ Rights Ghana in Accra, Ghana’s capital city, was raided and shut down by the authorities. The centre’s founders were forced to flee and go into hiding before returning to Accra some months later.

Alex Kofi Donkor is an openly-gay activist and one of those founders. “The homophobia rife within the Ghanaian media and political class meant that when they heard about the opening of our centre, they came for us,” he tells Huck. “I was there in the building that day and had to escape through a back exit and jump over a wall to safety […] Along with the police, who said they were going to arrest us, there were also attorneys who were calling for us to be killed.” Donkor and his colleagues were forced to flee the city for some months, until “everything had died down,” he says. Sadly, the space itself remains a no-go area for Donkor and colleagues.

The attack on the centre is symptomatic of a wider trend within Ghana, which has seen the values of the Evangelical Christian right gain institutional power with the rise of the conservative ruling political party, the New Patriotic Party (NPP). Additionally, pressure groups such as the National Coalition for Proper Human Sexual Rights and Family Values – which is supported by white-supremacist and American Christian-right groups such as the World Congress of Families – have entrenched existing conservative values which promote anti-gay sentiment. The fact that these Ghanaian groups are being funded by foreign groups in America indicates that new forms of neo-colonialism are being wielded by the West to keep historically disempowered people oppressed. This mirrors similar anti-LGBTQ+ processes that have swept through many former British colonies, including as Uganda and Nigeria, over the last five years.

Excerpts from the debate on the Anti-LGBTQI Bill in Ghana's Parliament over the weekend, hosted by Ghana community Awareness Forum . @BellRibeiroAddy's take on the bill. #KillTheBill #WeAreAllGhana #GhanaGetsBetter #GhanaSupportsEquality
Link👇
https://t.co/mNZa6aAVc5

Following on from the raid of the centre, things have steadily gotten worse in Ghana for LGBTQ+ people. In May 2021, Ghanaian police arrested 21 LGBTQ+ activists in the town of Ho in Ghana’s Eastern Region and detained them for weeks simply for organising a workshop with flyers that had titles which included “Coming out” and “All about Trans”. Two months later, homophobic hate reached its peak with the drafting of a new private members bill called “The Promotion of Proper Human Sexual Rights and Ghanaian Family Values Bill”. Gay sex is already punishable by up to three years in prison in Ghana, though no one has been prosecuted in years. But this new ‘family values’ bill would go further, lengthening jail terms to up to 10 years and forcing some to undergo ‘conversion therapy’ (practices intended to change a person’s sexual orientation). It would also criminalise the promotion and funding of LGBTQ+ activities, along with public displays of same-sex affection and cross-dressing. The bill has been condemned by UN human rights experts, who say that it “promotes deeply harmful practices”.

The legacy of colonialism is rarely acknowledged when it comes to the current anti-LGBTQ+ sentiment sweeping the country. Indeed, a common cultural narrative is that acceptance and tolerance of homosexuality is a foreign, or alien, Western imposition on indigenous cultures. But in reality, the homophobic penal codes in place in Ghana’s laws are a direct result of British colonialism. When Ghana became independent from British imperial rule in 1957, the new state retained elements of British colonisation in its laws, including homophobia laws.

Proof of this is Ghana’s Criminal Code, drawn up in 1960, three years after the country’s independence from Britain and directly modelled on the British legal system and codes. Section 104 of the Ghanaian Criminal Code of 1960 contains provisions criminalising consensual same-sex sexual acts between males. Under Section 104(1)(b) “unnatural carnal knowledge” with consent is considered a misdemeanour. Additionally, Section 104(2) defines “unnatural carnal knowledge” as “sexual intercourse with a person in an unnatural manner or with an animal”.

These laws have, up until the last few years, rarely been enforced, but this is beginning to change with the recent, terrifying rise in anti-LGBTQ+ attitudes. These attitudes are stoked by the country’s leading national newspapers, which often run homophobic stories, and by bigots such as Moses Foh-Amoaning – a lawyer and Executive Secretary of the National Coalition for Proper Human Sexual Rights and Family Values. Foh-Amoaning is repeatedly booked to speak on Ghanian TV news channels, where he spouts anti-LGBTQ+ bigotry.

Nana Akosua Hanson, the director of Drama Queens, a youth led non-profit feminist activist organisation which campaigns for LGBTQ+ rights, has experienced first-hand the impact of Foh-Amoaning’s anti-LGBTQ+ campaign. Foh-Amoaning “fought against our 2019 campaign for comprehensive sex education to be taught in schools, claiming that the proposed curriculum, which included modules on consent, contraception and pleasure were simply a ‘Gay Agenda’,” says Hanson. She also claims that it was Foh-Amoaning who provoked the authorities to shut down the LGBT Rights Ghana centre.

Hanson explains that Ghanaian culture is rife with “identity schizophrenia”, in that the specific cultural scripts that many of the ruling elites have internalised are from the colonial era. She adds: “We still have many ‘British Victorian’ values, which means a hatred of LGBT people and thinking that women need to be sitting in a room learning piano and sewing. Meanwhile, when the coloniser came to our country, they found women in the markets, running businesses and sexual values that weren’t so strict.”

Donkor makes a similar point: “We say Ghana is independent and democratic. But how can that be if there are still colonial laws that discriminate against other citizens within the country’s laws? How can we be protective of those laws, and still allow for foreign influences to introduce more unjust laws into the country? This is a question that we Ghanaians need to ask ourselves, to really understand who we are as a people.”

Since the bill was first leaked in July 2021, LGBTQ+ advocacy groups, both in the country and across the diaspora, have been mounting a resistance to the ‘family values’ bill by flooding parliament with memoranda challenging its legality. While the bill is said to be widely supported in Ghana, on 21 October, President Akufo-Addo made an appearance on national radio station accepting that the memoranda may help block the bill. According to a report from Reuters, 10 petitions are set to be heard over the next few weeks before the bill is voted on.

With Ghana’s global reputation for political stability and respect for the constitution now at risk of a massive swing to the ideological right, members of the LGBTQ+ community and their allies are watching the developments with baited breath. With the stakes so high, it is crucial that we acknowledge the colonial legacies of homophobia and that people across the world join the fight to oppose this horrifying bill.

Linkedin
RELATED ARTICLES
OTHER ARTICLES
Financial turmoil is pushing people who work in the sex industry into more dangerous and desperate situations as a means of survival.
In his 2008 series, the photographer pictured himself as Angela Davis, Martin Luther King Jr., Malcolm X, and other prominent figures.
Birdy Chu reflects on documenting the historic moment in which the territory was formally passed back from the UK to China.
The idea that a younger generation is abandoning work has become a popular narrative online, but it doesn’t necessarily reflect reality.
Yesterday thousands gathered outside Buckingham Palace after news of the Queen’s death broke.
As the Scottish government announces a rent freeze, an activist with Living Rent who fought and won shares how they did it, and what must come next.