News & Politics / How Amazon sabotages union organising in its warehouses 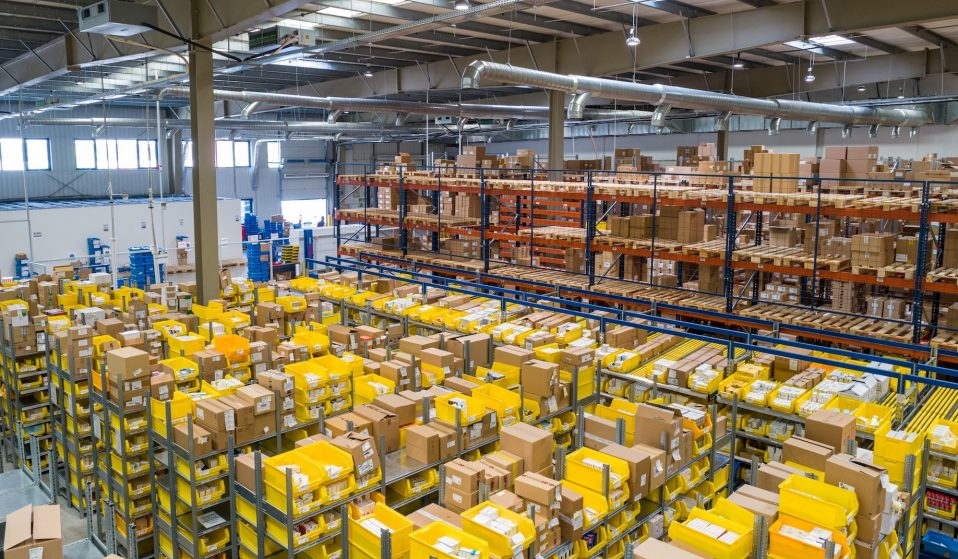 In the past year Amazon warehouses across the globe have seen a wave of unionisation efforts. In October, Amazon warehouse workers in New York took their first formal step towards unionisation, while earlier this year workers took strike action in German, Italian and Indian warehouses. In the UK, there are no formally unionised Amazon warehouses, but general union GMB reports that membership among Amazon workers is growing. Amazon warehouses have become one of the front lines in the renewed labour rights movement.

Alessandro Delfanti’s The Warehouse: Workers and Robots at Amazon (Pluto Press) takes readers inside Amazon’s warehouses to show how increasing surveillance and high-turnover rates are used to disempower workers. Weaving together interviews with warehouse operatives and investigative research into Amazon’s role in the labour market, The Warehouse exposes Amazon’s ongoing control and exploitation of its workers.

Huck spoke to Delfanti about unionising Amazon warehouse workers, the tactics Amazon uses to sabotage organising efforts, and what these warehouses can tell us about the future of work.

Your book is an in-depth analysis of Amazon’s business model, from CEO Jeff Bezo’s myth-making, to Amazon’s expansion into multiple industries and, of course, the working conditions of Amazon warehouses or ‘Fulfilment Centres’. Why did you decide to specifically focus on Amazon?

There are a couple of reasons why: one, is the sheer size of Amazon and its ability to influence the working conditions of other companies and industries. I thought Amazon made a great target for an inquiry into the conditions of work because it sets the bar for working conditions in other companies and industries. It was especially interesting to look into Amazon from the perspective of work because a lot has been written about Amazon in terms of economics, but there isn’t much writing on Amazon’s use of labour and technology.

The other reason is pretty serendipitous, which is that the main Amazon warehouse in my home country of Italy happens to be in my hometown. I’ve seen how important Amazon warehouses can be for local politics as so many people from my town have worked there, including my friends and former classmates.

What are some of the unique challenges facing Amazon warehouse workers?

Amazon has at least 1.5 million employees worldwide at this point, but unionising is still very difficult. I think Amazon’s power can only be seen in relation to how individualised the warehouse workers have been and how this has prevented the workers from organising. It’s changing very rapidly, but building the sort of worker power you need to actually start negotiating with Amazon, or even begin taking Amazon down, is much more than many other companies.

The corporate culture in the company is clearly anti-union and it does whatever it can to prevent unions from stepping inside the warehouses and workers from organising. Amazon does this in different ways in different countries because labour laws vary across the world, but something all Amazon workplaces have in common is the corporation’s resistance to workplace democracy.

We have seen a wave of labour organising in Amazon warehouses in the past few years. In 2020, warehouse workers coordinated international strikes and protests under the banner ‘Make Amazon Pay’. More recently, the failed unionisation drive at the company’s warehouse in Bessemer, Alabama, prompted questions about Amazon’s anti-union tactics. How is Amazon attempting to discourage warehouse workers from organising?

One way Amazon discourages workplace organising is through telling workers that the relationship between employee and employer is what can improve working conditions, rather than collective action. In some cases, there have been accusations of Amazon firing the most actively pro-union workers in the warehouses and at the headquarters in Seattle – both blue and white-collar workers are subject to Amazon’s anti-unionisation practices.

Unique to the warehouses, though, is Amazon’s reliance on an extremely high-turnover rate for workers. The lifespan of a warehouse worker can be very short before they are pushed out of the company or quit. We have data from warehouses in the USA that shows some Amazon warehouses have a 200 per cent turnover rate per year, which means that on average, each position is filled by three different people per year.

This means that Amazon burns through masses of workers very quickly, which is of course an obstacle to organising. The moment workers have been there long enough to be agitated, they’ve also been there long enough to quit. Amazon has a number of practices and strategies in place that allow people to quit very easily, and even incentivises people to quit through “cash to quit” programmes that offer a lump sum of money in exchange for leaving.

It also fires people very easily in countries with weak labour laws. In addition to this, its reliance on temp agencies for about half of its warehouse staff means that a large portion of its workers are disposable by nature. There are a number of strategies that Amazon uses to increase turnover rates and therefore prevent unionisation.

You write that “technology in the workplace reflects and maintains the power relations that underpin the employment relationship”. How does Amazon use technology to control its warehouse staff?

There are a couple of different ways Amazon uses technology in the warehouses: one, is workplace surveillance, so technologies used to monitor and restrict whatever workers do on the job. This ranges from tracking workers’ positions through their barcode scanners to monitoring how many items they pick or store per hour, so there is a very strict form of control and monitoring used by management to discipline workers. I would say that is the primary way Amazon uses technology to control its workforce – whatever you do, your actions are recorded and counted in terms of productivity.

The other way technology is used by Amazon is to enable the high rates of staff turnover in the warehouses. Technology is used to break down the labour process into simple tasks which can be taught very easily to incoming workers. The warehouses are very complex in terms of size and layout, partially because of the randomised algorithm-driven storage system used by Amazon, so workers must rely on their barcode scanners directing them to the next task. This means that workers are very easy to replace as they do not need knowledge of the warehouse layout or systems, and that knowledge is instead held by the algorithms.

Making workers disposable is certainly a tool that has been used in capitalism across history, but I think at Amazon, we’re seeing a new determination to use algorithmic technology to make the workers more disposable.

What can Amazon warehouses tell us about the future of work?

I do think Amazon has the power to influence the ways we will work in the future – this is one of the reasons I wrote the book in the first place. Very directly, we can already see Amazon selling technology it has developed in its warehouses so that companies can use surveillance systems designed and built by Amazon in their own workplaces.

Amazon has a lot of political power and its goal is to influence governments on issues like labour movements, which it wants to weaken. In addition to this, Amazon seeks to influence political decisions on how much companies can track workers’ productivity and how that can be used to make decisions on workers’ careers. These are political questions that will be tackled by workers collectively rather than as individuals. The labour movement’s fight against Amazon is the fight for all of our work conditions.

The Warehouse: Workers and Robots at Amazon is out now on Pluto Press.

Linkedin
RELATED ARTICLES
OTHER ARTICLES
Photographer Phyllis Christopher recalls capturing sex and protest at a time when the city had become a haven for the queer community.
The revered showbiz chronicler recalls his journalistic beginnings, documenting subcultural scraps in the ’80s.
The government’s failure to take long Covid seriously has led to the formation of a group campaigning for the thousands of forgotten victims of the illness.
A group of Ukrainians living in Poland are helping Ukraine withstand Russia’s brutal invasion by buying supplies and shipping them directly to the war’s frontlines.
After news broke last week around an expected reversal of the 1973 landmark law that made abortion legal in the US, protestors gathered in the UK in support of American women.
Following the success of her debut novel, the Tottenham native is restating her commitment to the place that made her.