News & Politics / How coke and MDMA could be legally sold 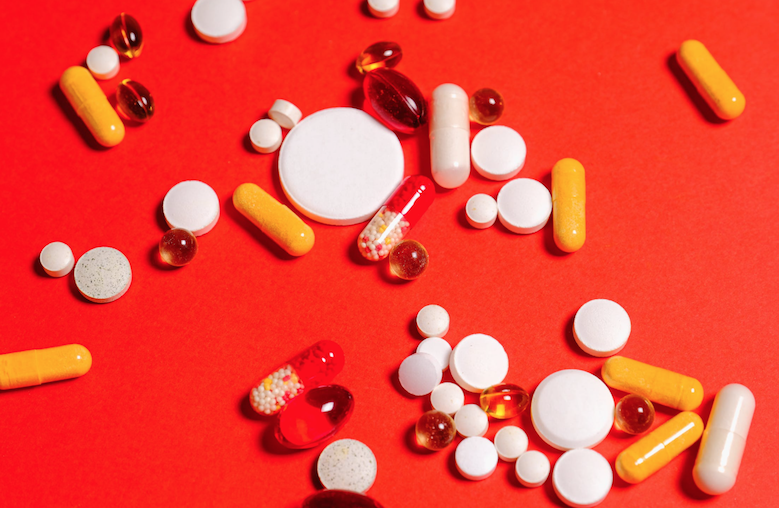 The push to relax drug laws is gaining momentum globally, but what would a legalised market in the UK actually look like?

The push to relax drugs laws is gaining momentum globally, with Oregon becoming the first state to decriminalise. But what would a legalised market in the UK actually look like?

Last month, amid a presidential election that sucked up the vast majority of news coverage, you’d be forgiven for missing the important shifts in drug legislation that took place in many states across America. Six US states advanced North America’s move towards drug decriminalisation and legalisation with Arizona, Montana, New Jersey and South Dakota all voting to legalise cannabis, while Mississippi approved the use of medical cannabis.

The most significant change, however, came from Oregon, which last month (November 4) became the first US state to decriminalise all drug possession in small amounts. The US isn’t the first to take this step: in 2001, Portugal decriminalised consumption and possession of all drugs, which has led to both the reduction in drug-deaths and the use of more dangerous drugs such as heroin.

Slowly following suit are Switzerland, Norway, Czech Republic, Netherlands and Germany which have all taken positive steps towards treating drug use as a public health issue, rather than a criminal one.

Over the past 20 years, here in the UK, the Tories and New Labour before them have consistently shunned evidence that a war on drugs isn’t working. Drug deaths hit record highs for the third consecutive year in 2019. Cocaine use was as common as one in 20 in 2018 among 18 to 35-year-olds, and the EU drugs agency says cocaine availability is at an all-time high.

That the ‘The War on Drugs’ has failed is becoming as universally accepted as the existence of a round earth. But what are we going to do about it?

Looking to Transform’s (the advocacy group dedicated to promoting evidence-based drug policy) recently released How To Regulate Stimulants: a Practical Guide along with existing models of harm reduction and legalisation, we look to answer: what would a state-owned, legalised drug market actually look like? And, how could it operate successfully?

Sales would be restricted for personal use, to over 18-year-olds, from state-owned pharmacy outlets, specialising in harm reduction. A qualified professional would outline expected side effects, safe dosing and help dispel myths and misconceptions that muddy the waters and detract from the actual harm that each substance can carry.

An alcohol-like unit system would help users contextualise their drugs use and deter people from overuse or overdose.  A limit on monthly sales would have to be applied as a means of monitoring use. Use outside of these limits would allow an opportunity for a healthcare-professional intervention or signpost to addiction and welfare services. It’d mean a shift away from shameful, secretive, and ostracising drug use, and would allow users to feel more comfortable and more willing to engage with addiction services when needed.

Home delivery would almost certainly be a consumer demand, as it is with both the legal and illicit drug market currently. However, these would be subject to identity checks (like the ones employed by online pharmacies currently) and a video or online harm reduction consultation.

Any other sale outside of these premises would be prohibited; it will be important to avoid sale being licensed in bars and nightclubs, as this will increase the likelihood of spontaneous use which may lead to riskier drug-taking.

For large scale events such as music festivals, specialist pharmacy outlets would allow a controlled level of drugs to be consumed within the site, to avoid individuals stocking up, or to avoid an illicit trade to form within the event – such small-scale drug dealing would likely lead to the adulteration of substances and extorted prices.

A large part of the risk to drug-taking is a direct result of prohibition. Underground production leads to people playing Russian Roulette with drugs of unknown contents or strength, and is one of the most avoidable causes of drug casualties.

Drugs sold in a legalised market would resemble pharmaceutical medications, like below: 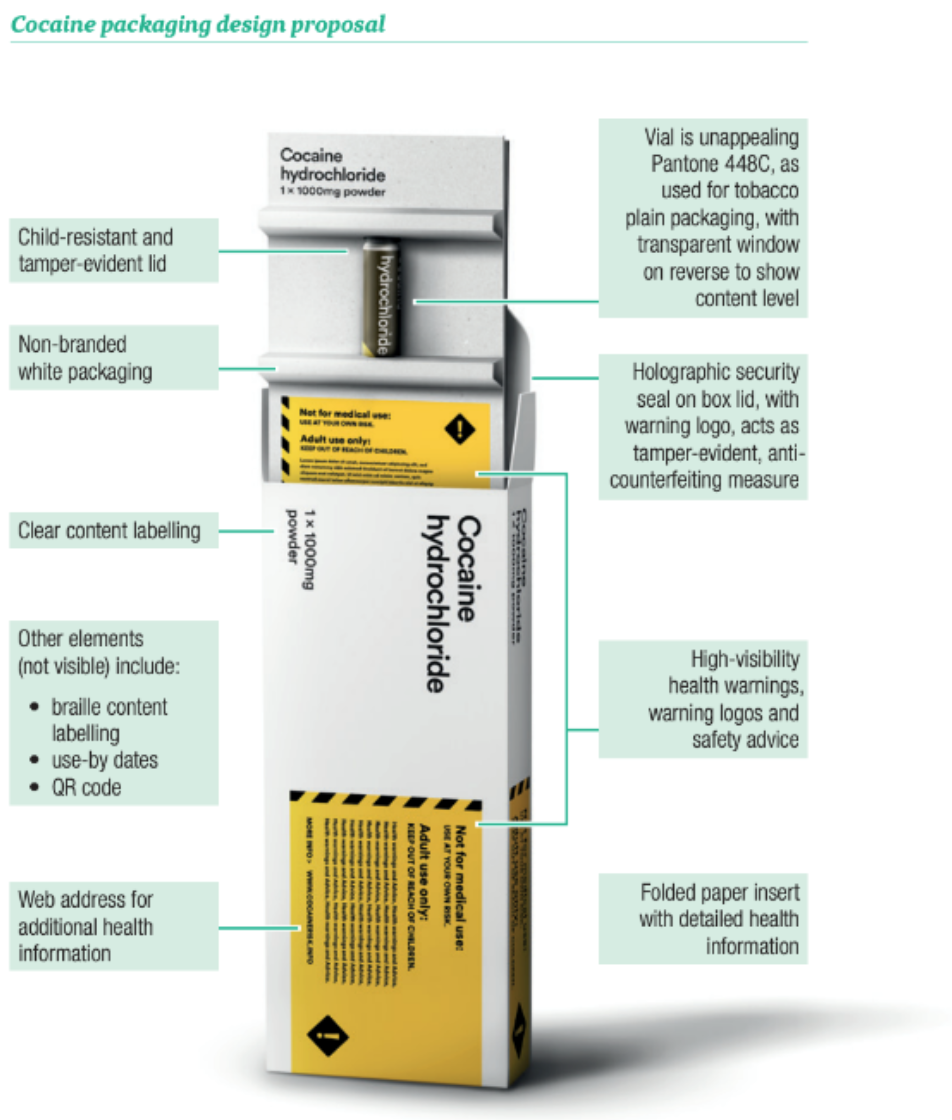 Smoking and injecting drugs would be the most deterred and discouraged form, as this brings the biggest risk to the user. Lower risk forms could be encouraged and more widely available – such as modified-release tablets, which carry less risk of overdose and addiction.

The truth is, not all drugs pose the risk that their legal classification may suggest. In short, our classification of drugs A to C is intended to reflect the harm these drugs carry (of which tobacco and alcohol are exempt), with penalties in line with this.

‘The greater the danger the more severe the punishment’ might seem a sensible categorisation to many – in theory. However, our distinction between legal and illegal drugs has not been moulded by scientific evidence: instead, it has been dictated by political and social factors that are laden with misinformation and prejudice.

A classification system based entirely on the evidence for potential harm and free from the frame of prosecution would provide a far more reliable and compassionate reference for drug users when assessing their risk.

It would be imperative that the outlets selling drugs are state-owned, to prevent the emergence of a dangerous open market fuelled by profit incentives. As Transform’s Steve Rolles, author of How To Regulate Stimulants, explains: “If you legalise and have a commercialised market, in a way that’s similar to alcohol and tobacco, there is a real risk that you will get increased use and increased health harm if you have a branded, aggressively promoted cocaine product.”

Taxation through sales of drugs could be directed towards the harms of drugs use, to fund addiction services and reinvested in the communities most impacted by the misuse of drugs.

Drugs such as heroin, crack cocaine and crystal methamphetamine would most likely never be readily available from such outlets, due to the severe harm and risk potential they carry. For individuals that take such substances, or indulge in the more risky drug-taking or have physical and psychological dependence, supply would be available on an NHS prescription much like methadone is currently.

Drug consumption rooms would be mandatory to tackle the problems associated with high-risk injecting. For individuals ready to tackle their addiction, rehabilitation centres partly funded by the legal market tax would be available.

This role out of legislation would not happen overnight. It will most likely follow the legalisation of cannabis, then, depending on the response, regularly used recreational drugs such as LSD, MDMA and Ketamine would follow.

“If you couch legalisation in the context of a responsible public health measure; of protecting young people, reducing crime and saving money – I think that argument is approaching a tipping point in the UK. I’m not really anticipating it under this government, but I wouldn’t say it’s an impossibility,” says Rolles.

Based around models in their book, Transform have been working with Colombian lawmakers and senators on a bill currently being debated in the Senate, which would allow for regulated cocaine and coca market in Columbia.

It is time the UK follows the tide of sensible drug reform. The other choice is to sit, wait, and watch the death toll rise.

Transform’s How to regulate stimulants: A practical guide is available to download.

Jonny Winship is a writer and primary care and community pharmacist.

Linkedin
RELATED ARTICLES
OTHER ARTICLES
The author discusses the all-consuming nature of heartbreak, and turning the experience into an incisive exploration of love and loss.
Finland-born photographer Sirkka-Liisa Konttinen looks back on her decades-long documentation of life in Northern England.
In the latest instalment of Photographers in Conversation, the chronicler of raves, protests and beyond explains why he’s drawn to such specifically visceral environments.
Photographer David Hoffman recalls documenting the extreme wealth inequality around Tower Hamlets and Hackney int the 1980s.
LGBTQ+ students are keeping the spirit of the original Pride alive by fighting for liberation for everyone, not just their community.
A new edition of a seminal book brings together iconic images of the band onstage in their full glory and backstage in moments of unguarded camaraderie.