News & Politics / How the cost of living crisis is harming friendships 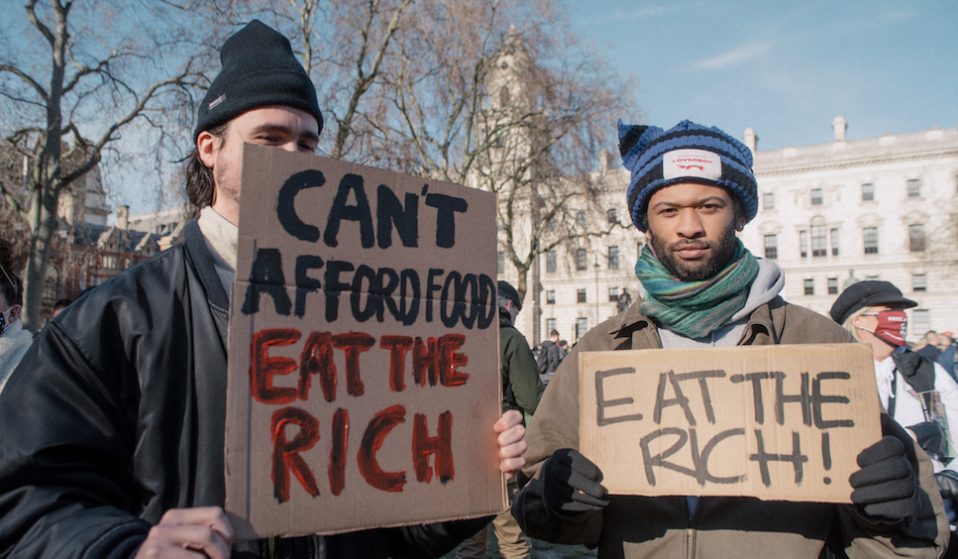 Wealth inequality and the rising cost of socialising is placing a strain on people’s relationships, reports Eve Upton-Clark.

Wealth inequality and the rising cost of socialising is placing a strain on people’s relationships, reports Eve Upton-Clark.

Being self-employed, 27-year-old Alice’s pay check varies month-to-month. The aftershock of living off unemployment benefits in London during the pandemic and the rising cost of living has forced her to take out loans and borrow off friends. “Most of my friends are very understanding if I have to borrow some money on a night out,” she tells Huck. “I have had experiences, though, of people offering the money but then the next day suddenly needing it back urgently when I don’t have the money to give them.”

Friendship and money can be a difficult mix. From after-work drinks to expensive dinner plans, to weekends away and big events like birthdays and weddings, our bank balance has a say in how we spend time with friends. A 2018 survey found nearly 40 percent of millennials overspend to keep up with their friends, while nearly half of millennial and Gen Z respondents in a 2017 PayPal survey have felt strain in their friendships over money. And now, with UK inflation hitting a 40-year high of 9.1 per cent, this is only set to get worse. People are struggling to afford groceries, heat their homes, and also facing epidemic levels of loneliness due to the rising cost of socialising.

“Friends who have the money will offer to get rounds of drinks,” says Alice, “which is obviously so lovely. But then it is embarrassing when you know you can’t afford to get the next one. Also if we go out for dinner, someone might suggest getting a bottle of wine for the table, or suggest we get a bunch of starters and mains and just share everything. People expect to just split the bill evenly, and if you’re trying to be careful with how much you are spending it puts you in an awkward situation.”

Alice will sometimes offer to cook for friends at home as a cheaper alternative. But financial strain has also led her to avoid socialising altogether. “I’ll just go into hibernation,” Alice says.

Understandably, having to say no to plans for financial reasons can make people feel isolated or left out. On the flip side, for people making more money than their friends, there can be pressure to take on financial favours. It’s unsurprising, then, that money is a touchy subject: according to a 2021 survey from Insider, people would rather talk about current events, politics, and relationships before discussing money with their friends.

all this 'boil two carrots and rub grease onto it for 25p a meal' shit completely neglects that people actually aren't designed to just eat and work and do nothing else. we're social beings and if none of us can afford to even see each other it will cause untold societal damage

Rampant inequality means that in the same friendship group, one person might be barely scraping by on minimum wage while others scale the pay grades in lucrative careers such as finance and law. Sometimes this difference is simply career choice. Other times, it’s a product of systematic discrimination. Workers from Black, Asian, mixed race and minority ethnic backgrounds earn 16 per cent less compared to their white peers. The government’s latest gender pay gap report revealed that last year, women in the UK were paid 90p for every £1 earned by their male counterparts.

This income or wealth disparity can dredge up uncomfortable emotions. “Now that I’m older I feel less embarrassed about being open and honest when I need to borrow money or can’t afford something,” says Alice. “However, because I’m in my late-20s, I do feel this pressure and expectation to be more financially stable than I am.”

Reece, age 27 from Manchester, first started to feel the impact of earning more than his friends after leaving university and starting a career in recruitment. “I went straight into a fairly well-paid industry and started earning a lot more money than my friends who didn’t find jobs straight away,” he says. “When I first moved to Manchester, my housemate worked in hospitality. He was paid hourly and would work different hours every week, so some weeks he would have less money than others. Every last week of the month he would end up coming to me asking for money for bills or a night out. I didn’t mind, but it started to mount up.”

Earning more can come with its own set of expectations among friends. Reece recalls how recently, he went out for drinks with friends and the bill came to £850. “It felt like because I earn the most I was expected to pay,” says Reece, “no one else even offered or said anything about it. I paid the bill, but then the next day, I felt weird asking people for the money back […] It was a struggle to get back all the money I was owed.”

Socialising is a big part of building and maintaining friendships, but increasingly, it’s an activity which is starting to feel prohibitive. A recent survey by Student Beans found 53 per cent of Gen Z have felt personally affected by the rising cost of socialising. 71 per cent of Gen Z have stopped socialising as much to help save money during the rising cost of living crisis, while 63 per cent are worried about being able to afford to socialise with friends and family in the future. As a result, 52 per cent have taken on extra work to cope with the rising cost of living, with almost half (44 per cent) of these taking on 11 to 20 hours more work each week.

“The cost of living going up has not only affected what I choose to do with my friends but how often I see people,” says Aisha, age 24, from London. “In my mind now, if I’m going out I want it to be worth my time so it doesn’t feel like money down the drain.”

That means spontaneous plans are often first to take the hit. “I’ve definitely been going to casual pub drinks a lot less, which means I don’t see certain people as often as I did before,” Aisha explains. “I’d rather plan in advance and book an actual activity so it makes spending the money worthwhile.”

“The current situation has almost everyone checking in on their wallets,” says financial therapist Erika Wasserman. “I suggest to my clients that after paying their needs, to check in on their wants right now. With the money you have in this category, think about what brings you the most joy. Then think about how you can continue to do this activity in a variety of ways.” Wasserman gives the example of attending free live music events instead of purchasing concert tickets.

“At the end of the day, friendships are about creating memories and sharing time together,” adds Wasserman. “Being able to set boundaries for yourself financially is important to reach your goals and your friends will want to support you in that.”

Money and friends can be fraught, especially when faced with systemic pay gaps and the spiralling cost of living. But rather than allowing it to cause rifts and tensions with friends, we should direct the anger where it’s deserved: a government that consistently fails to protect young people.

Linkedin
RELATED ARTICLES
OTHER ARTICLES
The author discusses her new memoir, which offers a sobering reflection on the racism and otherness she’s experienced along with a joyful celebration of her culinary heritage.
Photographer Jack D. Teemer travelled through US cities to create a vivid document of a region in decline.
Photojournalist Fiora Garenzi spoke with people still living in Eastern Ukraine, an area which seen some of the heaviest fighting since the war began.
The Conservative leadership contest has exposed an obvious truth: whether our next prime minister is a woman, or a British-Asian man, they will continue to fan the flames of division.
A series of photos by the late Jerry Dantzic taken in 1957 show a tender side to the iconic Jazz musician.
After rewriting the indie rulebook with her devastating songs about romantic longing, the singer-songwriter is now imagining a future in which the artist is no longer a product.