News & Politics / How the pandemic is hurting women leaving prison 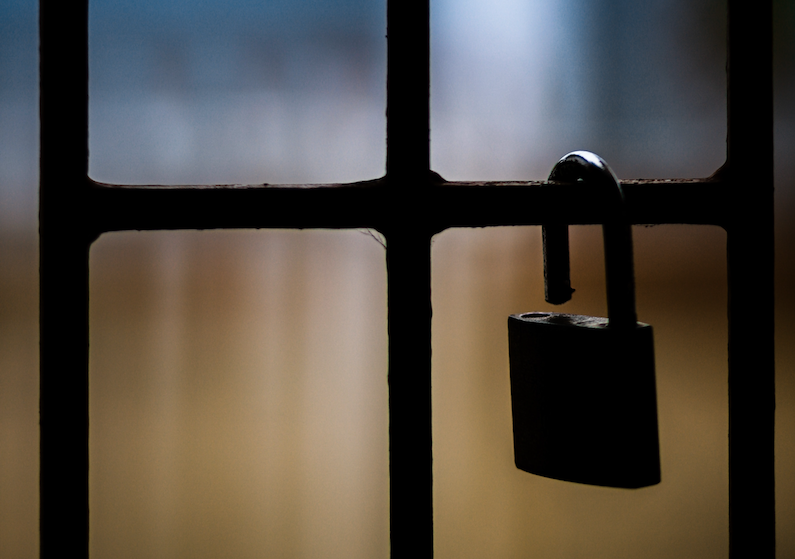 Covid-19 has created even greater obstacles for women trying to rebuild their lives after prison.

Despite restrictions easing, women prison leavers are still dealing with complications around housing, benefits and mental health exacerbated by Covid-19. It’s made it even harder for them to rebuild their lives after prison.

A two-year prison sentence for fraud left 55-year-old Yasmine* from North East England with post-traumatic stress disorder. Imprisoned from November 2018 to September 2020, Covid-19 restrictions meant she was spending up to 24 hours isolated in a cramped cell, and when she became seriously ill pre-pandemic in 2019 with internal bleeding, she had to frantically convince prison guards to take her to hospital. There, she was diagnosed with haemophilia, a blood disorder, while handcuffed to two police officers.

“It was hell,” she tells Huck. Yet, Yasmine still felt safer in prison than she does now on the outside. “When you leave prison, you’re dumped into your old life and everything’s changed,” she says, fighting back tears. “Nothing prepares you for Covid, because nobody told us what it would be like outside. They don’t prepare you for anything in prison.”

While women only make up four per cent of the UK’s prison population, they are less likely than men to secure employment or accommodation after their release, particularly if they are Black or from an ethnic minority. When the pandemic put a halt to face-to-face interactions with probation and housing officers, women like Yasmine were even less certain about what would happen to them once they left the prison gates.

The same was true for 29-year-old Rhiannon*. She had already left prison and was sitting in her friend’s car when her housing officer called with an address to a hotel. She stayed there for two months, courtesy of the HMPPS Covid-19 Emergency Accommodation Scheme (the government-funded accommodation support scheme for those at risk of homelessness during the height of the pandemic). “If you’re in a hotel, you can’t cook, you can’t wash your clothes; I couldn’t have people over,” she says. “I was thinking, ‘How on earth am I going to be able to live like this?’”

As her daughter was one of the nine per cent of children who live with their fathers while their mothers are in prison and therefore deemed ‘safe’, the need for Rhiannon’s housing to accommodate her daughter wasn’t prioritised by her housing officer. After five months of infrequent and glitchy video calls in place of visitation, Rhiannon was looking forward to being with her daughter free of disruption. But as she wasn’t allowed visitors at the hotel, she had to navigate staying at different family members’ houses overnight in order to spend time with her.

In doing so, she broke the conditions of her accommodation by sleeping elsewhere and risked being recalled back to prison. “My housing officer was initially saying that I’m a single person, but I told them even before I left [prison] that I’m not and, if I had somewhere to live, I’d be living with [my daughter],” she explains.

Rhiannon is still in temporary accommodation more than a year after her release in August 2020, along with three quarters of those who received temporary housing through the Covid-19 scheme. Despite months of calls and emails, she hasn’t heard from her housing officer about the next step. Instead she is met with automated emails citing Covid-19 backlogs.

The Local Government Association, the national membership body for local authorities, was unable to comment on individual cases and could not provide a statement on this occasion.

According to Therese Sanders, a member of Lancashire Women’s Centre, Rhiannon’s experience isn’t unique. “Accommodation will always be an issue because there’s not enough houses,” Sanders says. “Especially for women, there’s not enough single-sex supported accommodation that meets the needs of the vulnerable women that come out of prison and are on probation in the community.” Between 2019 and 2020, nearly half of women left prison without settled accommodation, a 12 per cent increase from the previous year, and only 17.3 per cent of prisons met accommodation targets.

Despite these statistics, a government spokesperson tells Huck that “having a safe and secure place to stay reduces the likelihood of reoffending, which is why we provide temporary accommodation on release and have invested £46 million in women’s support services”. Although the importance of accommodation is recognised, it is seldom achieved, and the inequalities that push women into prison are left unaddressed.

The absence of secure and settled accommodation is also making Rhiannon rethink her ability to continue her apprenticeship at a non-profit, helping other prison leavers find employment, as her energy is so consumed by fears over housing.

Leila Hagmann from Working Chance, an organisation dedicated to helping women find employment after prison, notes that “employment is a vital part of reintegration into society and has been proven to reduce the risk of reoffending, which is especially true for women”. Yet the harsh double bind women like Yasmine and Rhiannon are faced with is whether their mental health can both cope without, and withstand, work following prison, especially when released into a society fraught with reduced support services, financial hardship and isolation.

A recent inspection of HMP Lower Newton, the women’s prison Yasmine served her sentence in, revealed that Covid-19 restrictions and consequent staff shortages left women unable to complete the behaviour work they needed before release. Emotional support programmes were also suspended, leaving women vulnerable to reoffending and mental health crises, particularly as the highest number of self-harm incidents were recorded in prisons last year, with self-harm being twice as common within female prisons.

Yasmine, along with 72 per cent of female prisoners, haven’t committed violent crimes. Their contact with the criminal justice system often stems from financial difficulties, mental illness, or domestic violence. Just as prison sentences are born out of inequalities and disadvantage, resettlement barriers like housing issues and unemployment rarely occur in isolation, but instead combine to perpetuate and deepen an inescapable cycle. “Resettlement is a tumultuous and vulnerable time for women and many are in a much more difficult position compared to when they were sent to prison,” says Hagmann.

Despite being homeless before prison, this rang true for Yasmine. The difficulties she faced on release were compounded by the suspension of Release on Temporary Licence, which allows prisoners to leave periodically in order to work and maintain their relationships in the community. Without it, there was no way for her to understand how the freedom she’d dreamt of would be encumbered by lockdown.

“I was in full lockdown while in prison and I came out into a locked down world again,” she says, reflecting on her release in September last year. A long-awaited reunion with her son living in Singapore still isn’t an option due to travel restrictions. And, normal coping mechanisms weren’t available as she went through the emotional toll of meetings requiring her to prove she was eligible for basic needs, like social housing.

Instead, the pandemic doubled down on the social isolation that prison leavers often feel. She lost friends and her 17-year-long relationship while in prison, and upon release, found herself sleeping on the floor in her parent’s house, without access to a bank account.

With no ID organised before her release due to Covid-19 related staff shortages, banks didn’t recognise the prison as a previous address and she had to wait to apply for Personal Independence Payment (PIP) – a welfare benefit for those with long term health conditions.“You’ve got to tell your story over and over again. It’s physically and mentally draining,” she says.

In the year to June 2020 alone, including three months of the first lockdown, 1,904 women were recalled back to custody following their release. “Many women don’t understand Covid-19 and we’re seeing lots of women charged with assault when really it’s a breach in social distancing measures and they end up back in prison,” Sanders explains.

Although the Female Offender Strategy laid out several commitments in 2018, including reducing the number of women entering the criminal justice system, an analysis by Prison Reform Trust showed that the government has met less than half of them nearly three years on.

If the government’s proposed plans to create 500 new prison spaces goes ahead, Dr Kate Paradine, chief executive of Women in Prison, a charity supporting women affected by the criminal justice system, fears that more people will end up lost in a cycle of disadvantage like Rhiannon and Yasmine. Because, the fact is, if there are more prisons, they will be filled by more prisoners. “The government must instead provide sustainable funding to local Women’s Centres, which are an anchor to women at the sharpest end of society who might otherwise end up in prison,” says Paradine.

The pandemic has undoubtedly placed enormous strain on women’s organisations, which are already perpetually underfunded. For those working in the sector, Covid-19 has magnified pre-existing barriers to support, and the only answer is for the government to invest in preventative measures which address the root of offending. Specialist, tailored support that accounts for women’s complex needs is vital to ensuring the circumstances that lead them to prison don’t manifest, and sufficient help can be provided without a fight at every step.

Sanders hopes that some solutions to resettlement barriers born out of Covid-19, like virtual meetings with councils and job centres, will be carried forwards, but recognises that few services are willing to make such changes permanently and consequently work outside of the rigid processes that stunt support. She worries that standard procedures that set women up to fail and ask them to pour from an empty cup will return, such as requiring them to attend scheduled meetings while their lives are in disarray.

“My probation worker listens sometimes and has stressed that if I need to speak to her I should call her,” Rhiannon says, “but on the occasions I have done that, she’s been busy so I just feel like I’m burdening her.” The majority of support is still being delivered over the phone and so counting on her probation worker picking up in moments of desperation is Rhiannon’s only lifeline.

A global health threat feels like another obstacle in a never-ending assault course for women prison leavers. “You can’t cope with everything being thrown at you,” says Yasmine. “I don’t look to the future anymore. Sometimes I don’t feel like I have one.”

Linkedin
RELATED ARTICLES
OTHER ARTICLES
The workforce is now gearing up for industrial action after receiving a measly pay rise, reports Ella Glover.
A 37-year-old woman shares how her abortion led her to become a clinic worker, and the abuse she’s received in that role.
Yesterday thousands gathered outside Buckingham Palace after news of the Queen’s death broke.
A group of young Palestinians have found temporary freedom in the act of parkour, reimagining wreckage and ruins as a series of high-octane playgrounds.
Rhiannon Adam spent three months capturing an ageing society wracked by division, isolation, and the aftermath of scandal.
Sean Maung’s photos are a love letter to the Black and brown communities that make up New York.