News & Politics / No Human is Illegal: Immigration raids that treat migrants as criminals are a disgrace 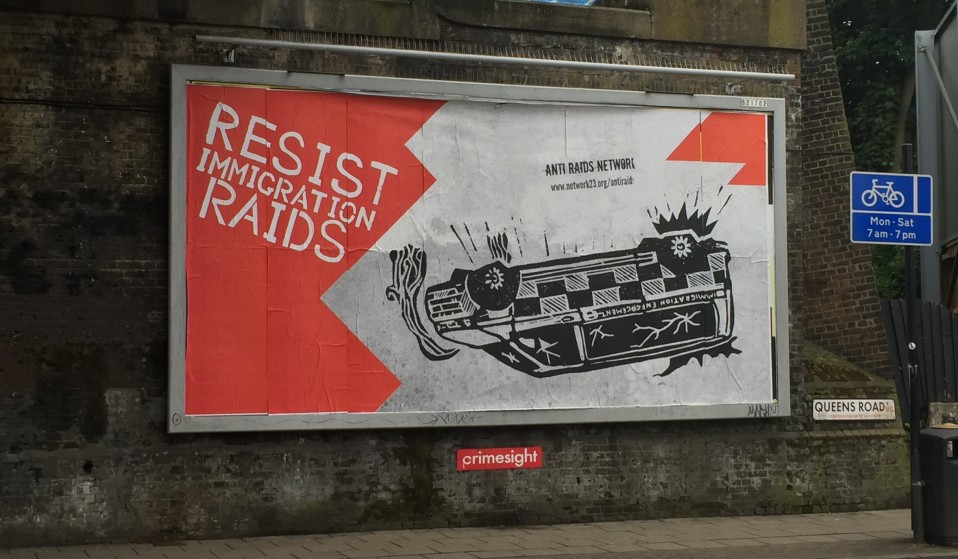 When a UK restaurant chain called in staff for meetings this week, it's alleged the Border Agency staff swooped and rounded up those without proper documentation. It was a trap. These raids allow migrants to be presented as criminals, while the corporations that exploit them, and those with power in our society, are allowed to escape all blame.

When a UK restaurant chain called in staff for meetings this week, it's alleged the Border Agency staff swooped and rounded up those without proper documentation. It was a trap. These raids allow migrants to be presented as criminals, while the corporations that exploit them, and those with power in our society, are allowed to escape all blame.

On the 4 July thirty-five Byron Burger workers across London were arrested in an immigration raid.

In a cruel trick, they were allegedly asked to attend health and safety meetings or kitchen get togethers at their place of work. They arrived to find themselves confronted by immigration officials. Their crime? They were migrants who ostensibly didn’t have the right documentation.

There’s a chorus of people who think Byron Burger are on the right side of this argument, including Byron themselves, who’ve said in a statement that they “have cooperated fully and acted upon the Home Office’s requests throughout the course of the investigations leading to this action, and will continue to do so.”

But what’s missing from this callous event is the reality of life for many migrants in this country, and the consequences of rhetoric that poses them as criminals.

First thing’s first, this raid was carried out in an extremely cruel way. Supposedly lured into work as if they were hardened criminals in need of being caught, these people were summarily interrogated with little-to-no warning and then arrested.

One chef I’ve spoken to explained he was told that his team were called in under the premise of checking out a new burger. A place of work, where trust and mutual support are so needed, seems to have been callously transformed into a trap.

The likely reality: the people who were targeted were contributing to British society. They may not have had the correct documentation but they are human beings, with families, friends and lives in this country. This seems to have been lost in the anti-migrant noise.

What’s often forgotten in immigration debates is the craven duplicity of companies and global corporations: migrants who are in poverty are exploited for cheap labour then tossed to one side when it suits their employers. The blame is laid at the door of the people just struggling to get by.

But they’re the ones working long hours, for low pay and in poor conditions for companies and corporations then benefit from this system of discrimination. At the sniff of trouble, those same companies try to absolve themselves from blame by throwing their hard-worked employees under the bus.

Let’s not forget the people who are in power here and the ones who are powerless. The power imbalance is at the crux of this event, which is symptomatic of the disdain felt by many in this country for migrants.

This is part of a wider trend in UK state policy that developed when our Prime Minister Theresa May was Home Secretary. Her goal seemed to be to get rid of “foreigners” at all costs: vans that read “Go Home” were driven round six London boroughs, people are kept in immigration detention centres where there are reports of racism and sexual abuse, asylum seekers were deported in the dead of night and Afghan refugees – children among them – sent back to a war zone, a decision that the country’s Minister for Refugees and Repatriation warned against.

The Byron Burger workers who were summarily rounded up for deportation have been branded as “illegals”. Aside from the fact that no human being is illegal, the discussion around migration is frequently stripped of any compassion. If these people didn’t have the right documentation, it’s worth asking why they chose to take this risky route.

Where is the robust analysis of the UK’s labyrinthine immigration system or the understanding for people desperate to make a living, it goes out of the window at the very mention of the word “migrant”.

One of the reasons we’ve arrived at this point is that politicians and the media have consistently dehumanised and discriminated against migrants. Just a year ago, former Prime Minister David Cameron dismissed migrants as a “swarm”; right-wing papers routinely splash untrue anti-migrant headlines on their front pages and even Labour leadership contender, Owen Smith, has refused to properly challenge the myth that people from abroad have contributed to this country’s problems.

These individual instances alone haven’t caused a heightened disdain for migrants, but the inability to challenge this damaging narrative paired with the dearth of migrant voices in the public domain has allowed immigration mistruths to become fact.

We shouldn’t lump all people from abroad together as one. It’s important to recognise the plight of people who survive here without the required paperwork and question why that’s the case – just as it’s vital to realise most people do have the proper documentation.

Similarly, there is a difference between migrants and asylum seekers but the former isn’t somehow worse than the latter. People from abroad experience vastly different forms of discrimination that are, arguably, likely to be worse if they’re in poverty and if they’re a woman – as always the class and gender elements shouldn’t be brushed to one side. We have to recognise, listen to and understand these differences. But the construction of “otherness” is used to demonise them.

The world is unequal, and the UK as a country (although not as an entire population) benefits from that. We have an unfair international trade system, countries on the verge of environmental ruin due to climate change and regions wracked by calamitous wars fuelled by the global arms trade. More than 3 billion people live in poverty. Until there is a rebalancing of global power, migration in its current form will remain a fact of life.

When the scale of the world’s problems is so big, it is increasingly shortsighted to turn on the “other” and close ranks. The arrests at Byron Burger symbolise what’s wrong with our current understanding of immigration and asylum: the powerful escape blame and the people in the wrong are the migrants who are denied a voice.

Maya Goodfellow is a writer and researcher, her work focuses mostly on politics, gender and race.  Follow her on Twitter.

Linkedin
RELATED ARTICLES
OTHER ARTICLES
A series of photos by the late Jerry Dantzic taken in 1957 show a tender side to the iconic Jazz musician.
From the chip shops, to the bingo parlors and burlesque dancers, photographer Mike Coles remembers capturing scenes of holidaymakers by the English coast.
The author discusses her new memoir, which offers a sobering reflection on the racism and otherness she’s experienced along with a joyful celebration of her culinary heritage.
A new series of photos by Johny Pitts shines a light on communities and subcultures that have all too often been overlooked.
As the Criminal Bar Association enters its fifth week of action, criminal barrister Russel Fraser explains why the legal professionals have walked out and how action is likely to escalate.
Last week, Tower Hamlets council removed its nudity-restricting licensing conditions in a huge win for London’s kink community.