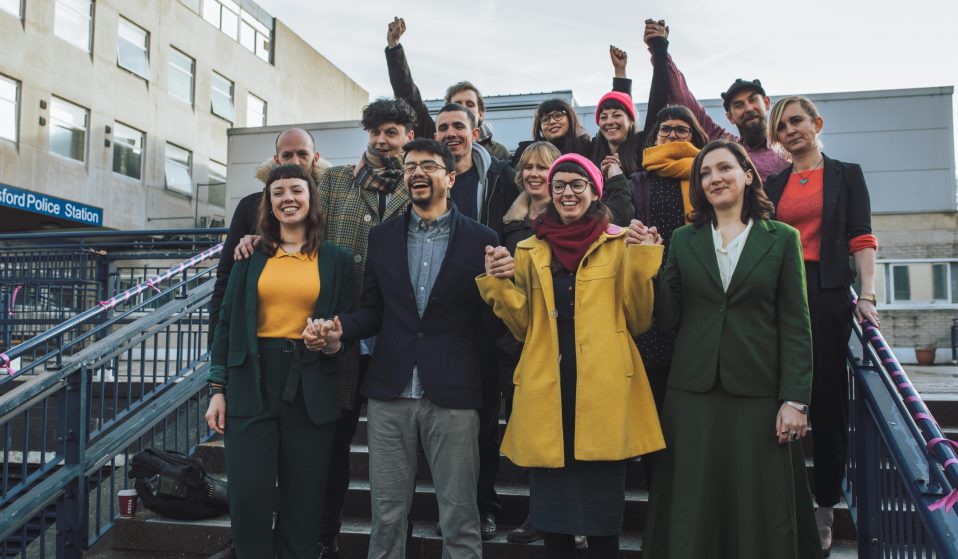 The Stansted 15 won their appeal. But the fight to end the hostile environment remains ongoing.

The Stansted 15 won their appeal. But the fight to end the hostile environment remains ongoing.

Today, the Lord Chief Justice ruled that I, along with 14 other members of the ‘Stansted 15’, should never have been charged with the controversial terror offence we were convicted of two years ago. “There was in truth,” he said, “no case to answer”. A nightmare has finally ended. We stopped the government deporting dozens of people that night, eleven of whom are still here in their homes and with their families.

After years of fighting this absurd charge, we finally heard that the Court of Appeal had exonerated us today. Hearing the news, I was taken back to the first time we learnt we’d been charged with this terrifying offence under the Aviation and Maritime Security Act. Sat in a cafe in Vauxhall, on a sticky day in June 2017, I was checking emails on a lunch break and saw one from my lawyer, Raj Chada. A few months earlier we had peacefully blockaded a deportation charter flight to Ghana and Nigeria, stopping it from taking off. The email explained that The Crown Prosecution Service (CPS) was applying to the Attorney General to change the charge against us. The words ‘terrorism’, ‘acts of violence’ and ‘maximum life imprisonment’ blurred before my eyes. The CPS wanted to move us from an offence which carried a maximum of a few months in jail, to one that carried life in prison.

My reaction then, as it has been so many times in the last four years, was disbelief. I rang up my partner who was unfazed, “the Attorney General won’t prosecute, that charge is clearly wrong”. But they did proceed with the terror charges, and at the end of 2018, we spent ten weeks in Chelmsford Crown Court, facing the real possibility of spending years behind bars. The fear and anxiety we have lived with has impacted all us – people’s health, relationships, jobs, and of course mental wellbeing. And it wasn’t just us, the toll on our families was constantly evident. By the time we came to trial, I was in the last trimester of pregnancy with my first child. I can not forgive the CPS for taking that time away from me.

BREAKING: We've just heard the news that the #Stansted15 convictions have been quashed.✊

This is a good day for justice. The #Stansted15 will take their place in the history books as human rights defenders who bravely brought injustices perpetrated by the state into the light. pic.twitter.com/H8yQGkGQNI

Throughout the last four years, I have often thought about the experiences of people seeking the right to live in this country. Whatever fear and frustration we felt, it must be nothing in comparison to the terror and despair that people are forced to endure because of an immigration system that’s designed to be not only unfair, but brutal. Being a migrant seeking refuge in the UK means having almost no control over your life, without access to the most basic necessities: a job, housing, free healthcare, enough money to live off. It means living with the fear of being snatched in the night, jailed in a detention centre or deported to a country where you may not know anyone, and might face persecution. And all of this while being entrapped in a baffling, bureaucratic and inhumane process that can last years, sometimes decades. The trauma and pain of such an experience is hard to comprehend.

Never has the government’s cruel treatment of migrants been more apparent than in the pandemic. Immigration reporting in-person has continued through the third lockdown, often necessitating long journeys to satisfy an exercise in bureaucratic control. Detention charter flights have only recently stopped, meaning people were forced onto planes in shackles in the middle of the night while the rest of us were told to ‘stay home, stay safe’. At the Napier Army Barracks detention centre in Kent, 120 of the 400 men living there tested positive for Covid-19. After Immigration Minister Chris Philips tried to blame the Napier residents for the spread of the virus, 200 of the men detained there wrote a public letter explaining how it was impossible to isolate in the terrible conditions at the crumbling army barracks. With 28 people sharing one room and just two toilets and showers between them, it was clear how Covid had spread.

Behind Napier’s barbed wire fence there have been hunger strikes, protests and a slew of medical emergencies, including suicide attempts, over the last year. In their letter, the men imprisoned there wrote, “We are detained without knowing what we have done to deserve living like this or how long we are going to stay here. There are fathers, sons and husbands here. There are nurses, teachers, engineers and talented people here and yet we have been treated like criminals or prisoners.”

Today the Lord Chief Justice has finally confirmed what seemed so obvious to us all along: we should never have been charged with this offence. The judgement leaves big questions for both the CPS and the then-Attorney General, MP Jeremy Wright. Why did he give his consent four years ago for us to be charged with an offence meant for serious acts of violence? But the biggest questions of all rest at the door of the Home Office. A callous institution whose very purpose is to hurt the people seeking its care.

People are first and foremost just that – people. Whether an Uber driver, a teacher or an NHS worker, whether they hold a British passport or not. Covid-19 has shown that more starkly than ever. It’s time to end deportations, to shut detention centres and to abolish the Home Office. We need institutions that care, support and uphold the rights of everyone, not just those fortunate enough to hold the right passport.  Like Warsan Shire says, “No one leaves home unless home is the mouth of a shark.” Coming to the UK shouldn’t be like going from the mouth of the shark into the belly of the beast. The government’s mind-numbing rhetoric of global Britain doesn’t stand up to a basic test of humanity: we should welcome people, no matter where they come from or how they got here.

Linkedin
RELATED ARTICLES
OTHER ARTICLES
For over a decade, gamblers have won big by employing people to place live bets from the court. But does this dubious method still work?
The idea that a younger generation is abandoning work has become a popular narrative online, but it doesn’t necessarily reflect reality.
Rhiannon Adam spent three months capturing an ageing society wracked by division, isolation, and the aftermath of scandal.
As the Scottish government announces a rent freeze, an activist with Living Rent who fought and won shares how they did it, and what must come next.
Cindy Campbell recounts how her brother ushered in a new era of musical culture at a party she held in the Bronx in ‘70s.
In his 2008 series, the photographer pictured himself as Angela Davis, Martin Luther King Jr., Malcolm X, and other prominent figures.