News & Politics / Students in London are struggling, but our rent strike is about a whole lot more 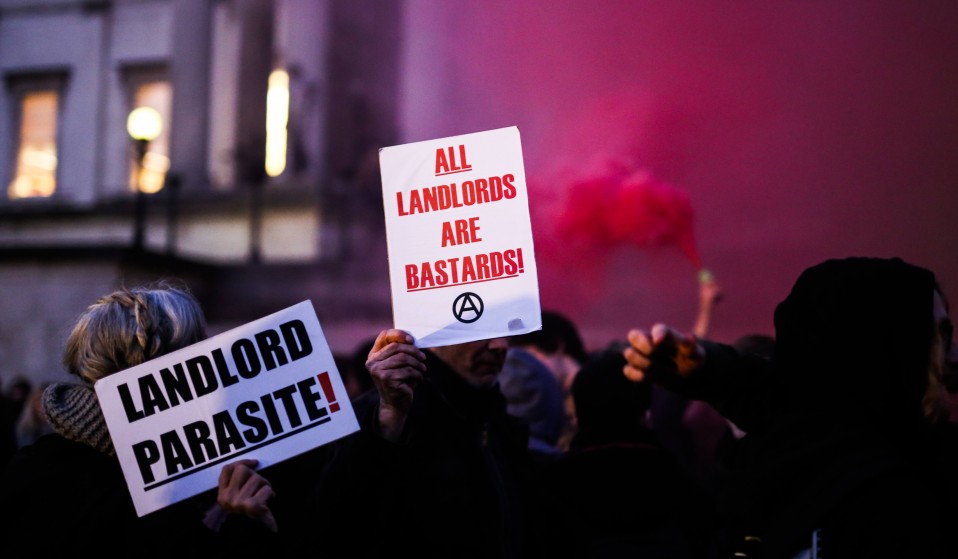 Pissed off London students like me are refusing to pay their rent in protest, but our rent strike isn't just about us; it is about our responsibility to the communities we live in too.

Right now, over 300 students at Goldsmiths, University of London, are on rent strike. They’ve made the decision to not pay their rent to their landlord, the University, in protest. I’m the current elected officer for housing at Goldsmiths Students’ Union, and I was elected on a mandate to campaign within the university to make rent in student accommodation more affordable.

The rent strike started on 2 May 2016 – the decision to take action was reached thanks to skyrocketing rents that are seeing the social cleansing of swathes of London, with students and residents alike being priced out of communities.

Goldsmiths, where I study, is situated in New Cross – a pocket of South East London that’s an artistic haven, where creativity and diversity thrive. From the Young British Artists who found a home here 1980s and 90s, to the squatting culture of the early 2000s, the Peckham, New Cross and Deptford triangle is a hub for London’s art scene, thanks to both the university and a deep-rooted local community. But this is changing rapidly, and not for the better.

Take Elephant and Castle, a traditionally working class neighbourhood in the heart of the city. It’s now been turned into a building site. The fight to save large council estates in the area from being converted into luxury flats was fierce and long, but unfortunately unsuccessful. Those who used to live there? Forced out.

Three miles down the road, in Deptford, we have seen the development of ‘The Rise’ project, which sets out to turn Deptford into ‘trendy’ Deptford, targeting those with a desire for close proximity to the city and Canary Wharf, excluding the local community in their wake.

Peckham, a neighbourhood that has been associated with cultural diversity, is being turned into a new cultural epicentre, but this new culture is reliant on you having cold hard cash. Bargain shops replaced with artisan coffee, fast-food takeaways replaced with chic (and expensive) Italian restaurants. Between 2012 and 2014 some property in the area saw more than a 40% price increase.

London is consistently being reshaped for the more affluent city dweller. Scrawled across Deptford walls we see the slogan ‘Yuppies Not Welcome’. People are trying to reclaim the areas that are changing in front of them, only to be met with state violence.

In 2015, Brixton (another area in South West London at the heart of gentrification) saw people take to the streets in a protest aptly named “Reclaim Brixton”. The anger culminated in an estate agent’s window being smashed and arrests being made. It is clear people are angry, we feel as if we are powerless to change things. This rent strike has given a platform to this anger and, hopefully, can be copied outside of universities.

Although the pricing of halls of residence only affect students directly, it’s undeniable that unaffordable and overpriced housing is an area-wide issue, with direct consequences on house prices and rents for those who we live around too.

Lewisham property prices are expected to rise 20% by 2020. At the university of London housing fair, one student was told that they could not get a room cheaper in the private sector than in their university accommodation. We are concerned that landlords who own property in close proximity to the university are going to set their prices in accordance to halls of residence.

With the average property price in London in 2015 sitting at £485,000 and rents unaffordable to so many Londoners, communities are being displaced, and people are being forced to move further and further out of the city.

The campaign has become part of a larger battle. Students do not want people to be priced out of our communities, or find themselves unable to afford a university education, because of the price of accommodation.

We have also seen strike action taking place at University College London, Courtauld Institute and Roehampton University. There are now in total over 1000 students taking part in these strikes across London, and the number is growing.

Sadiq Khan has just been announced as the new Mayor of London. One of his most popular policies is his pledge to work towards an increase in affordable housing in our city. It is clear Londoners are getting tired of not being able to afford to live in a city that they love. I’d argue these rent strikes are pivotal right now. We are gaining ground and support. If we can win the battle in our university campuses, then we can win the battle for a more affordable London too.

Linkedin
RELATED ARTICLES
OTHER ARTICLES
Following the release of his debut single, Deyaz talks battling addiction, dealing with his struggles through music, and building a budding music career from his living room.
Activists and campaigners are fighting back against new laws that would seriously undermine the ability to take industrial action, calling it an attack on fundamental workers' rights.
A recent High Court ruling against the right to wild camp in Dartmoor National Park sparked the largest land protest in history – and campaigners say their fight is not over yet.
Tristan O’Neill’s shots of dancers caught in moments of reverie at the height of rave’s golden age are a testament to the UK’s legendary club culture.
Filmmaker Laura Poitras discusses her new documentary which traces the remarkable life of the artist-activist and the impact of her battle against the US opioid crisis.
Social prescribing connects people with non-medical support to improve their health and wellbeing – but some experts worry it’s just a stick plaster solution.