News & Politics / The most inspiring student activism of 2015 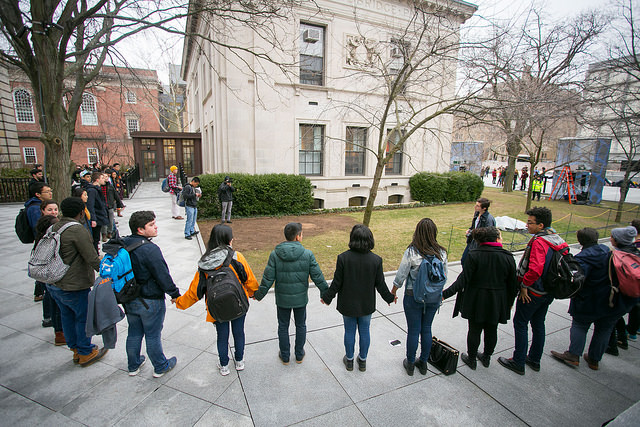 From protests against racism at the University of Missouri to the military rule in Thailand, 2015 was a diverse, important year for young activists.

From protests against racism at the University of Missouri to the military rule in Thailand, 2015 was a diverse, important year for young activists.

Some say we’ve entered a new age of student activism. Not because the principles have changed much, but because there’s a growing sense that students’ battles reflect what’s going on in the world off campus.

In recent years, there has been a sense that student politics had drifted. Kids were no longer concerned with global issues, like their high-profile predecessors: the students who raged against the Vietnam War, fuelled counterculture in the ’60s or confronted Thatcherism in the ’80s. Today’s students had become increasingly insular – or so the argument went: safe spaces, trigger warnings, cost of food on campus, etc.

But 2015 threw that assessment to one side: student activism got broader, braver and louder, tackling issues that we all collectively recognised as our own.

Students challenged structural inequalities far beyond lecture halls and grassy knolls, with direct parallels to the world around us. Demanding diversity, protesting a culture set up to favour the rich, opposing the increasing misery of life in capitalist states. Picked up by a media driven by think-pieces and commentary, dissected by theorists, critics and reporters, student activism once again became an important part of the political landscape.

The image of the budding politician pontificating in a student pub to nobody in particular was consigned to history. Here are some of the most important moments of student activism this year.

Thailand has been under military rule since 2014, and dictatorship has been ushered in under the guise of ‘seeking a new democracy’. Rulings include a ban on political gatherings of more than five people and arrests for those deemed to have breached national security or offended the ruling monarchy. But that hasn’t stopped student activists from protesting against the regime via peaceful gatherings across Bangkok, despite the threat of prosecution.

One of the most high-profile incidents this year involved the arrest of 14 students responsible for an anti-coup protest in June. According to military rulers, the students could face up to six years’ imprisonment. They are among the hundreds to have been prosecuted in military courts since the start of military rule, most of whom are political dissidents and critics of the coup.

Defense Minister Prawit Wongsuman denied any wrongdoing, saying in a press conference, “Did they break the laws? Then they should not complain about what happened. They should not resist officials in the first place. We did not violate the human rights of anyone.”

Despite demands from Human Rights Watch to drop all criminal charges, students in Bangkok continue to be arrested, including 35 protesting alleged army corruption in December. There appears to be no peaceful resolution in sight. 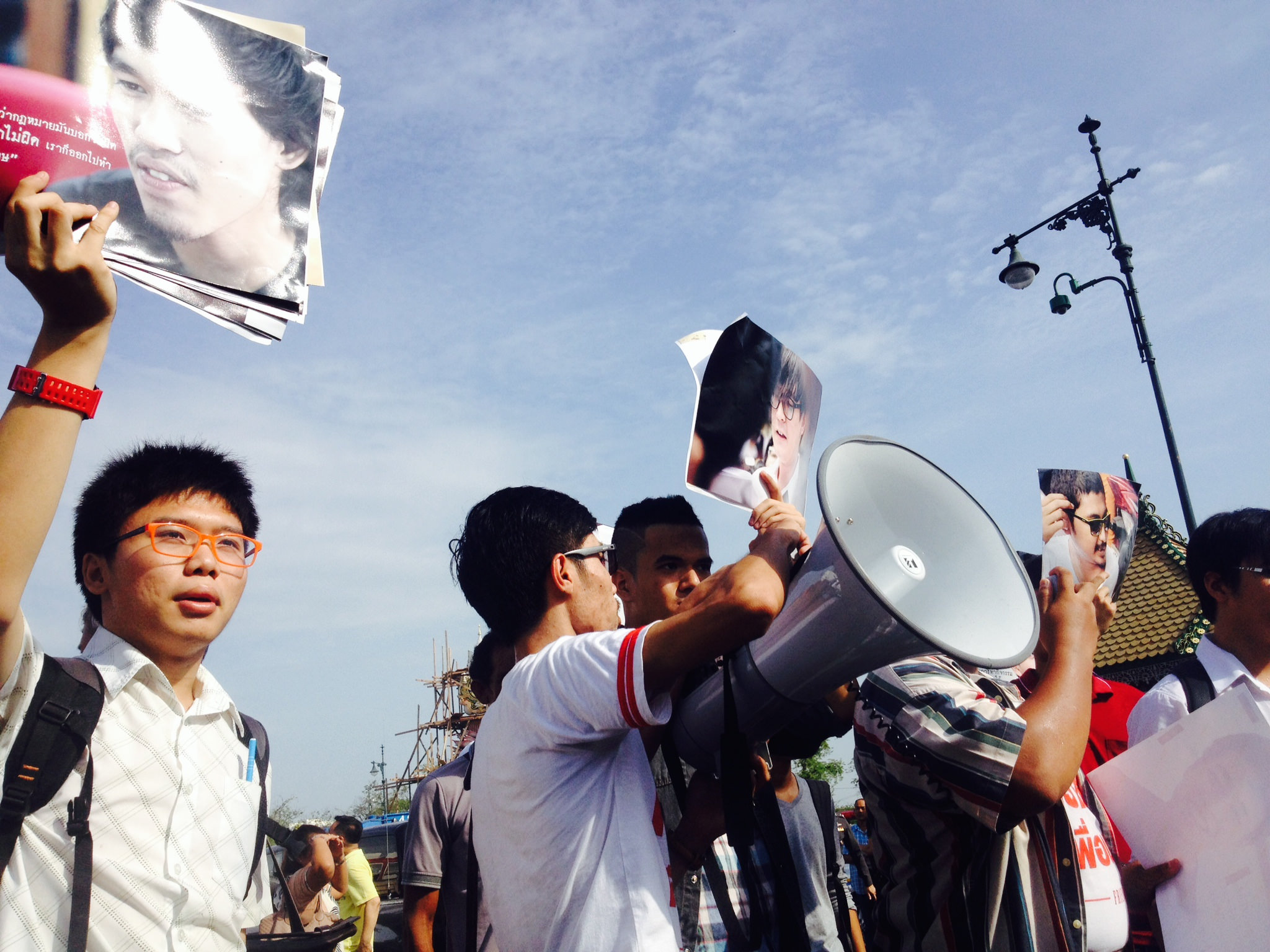 A series of racist incidents against black students at the University of Missouri inspired a number of students to demand the removal of university president Tim Wolfe, who had failed to act on their requests for an investigation. Calling themselves Concerned Student 1950 – named after the first school year to admit black students – the collective sought a more diverse faculty and to have their concerns  dealt with more seriously. Following high-profile media attention, a hunger strike by student Jonathan Butler, and a proposed strike launched by black players of the school’s football team, Wolfe resigned his position amid signs that the school was finally listening to the protestors.

The events at Missouri created a ripple effect throughout American campuses, with similar activist demonstrations at Yale, Amherst and Ithaca College, amongst others. There was also a significant online movement attached to the protest, including viral videos and a series of hashtag campaigns including #BlackOnCampus, where Twitter users could post their own experiences of campus racism. Politicians took notice: President Obama and Democratic candidate Bernie Sanders praised the protestors, while and Donald Trump characteristically dismissed them. The people were speaking, and those in power had no choice but to listen.

POWER to anyone who resist systems of oppression. WE WILL WIN #ConcernedStudent1950 Love you bro @_JonathanButler pic.twitter.com/AFNAVQvZ66

Meanwhile, in South Africa, similar events were occurring – students tired of being part of institutions that continued to herald white colonisers, while treating their own black history as an accessory. Much of the action revolved around a statue of colonialist Cecil Rhodes located at the University of Cape Town, which was in March pelted with excrement by protestors angry at continued white dominance of their education.

The protests sparked national discussion about the colonialism still present in South African education and culture at large, emphasising the university’s lack of black faculty members and its Euro-centric curriculum. The Rhodes statue was ultimately removed, while the university announced plans to introduce a Black Studies class alongside improvements to make the curriculum less driven by the country’s colonial past.

It was a protest echoed over at the University of Oxford in the UK, where students also campaigned for the removal of a statue of Rhodes. It continued to signal a movement of young people determined to expose the ugly realities of the past, and not further an institutional status quo that whitewashes racial atrocities. 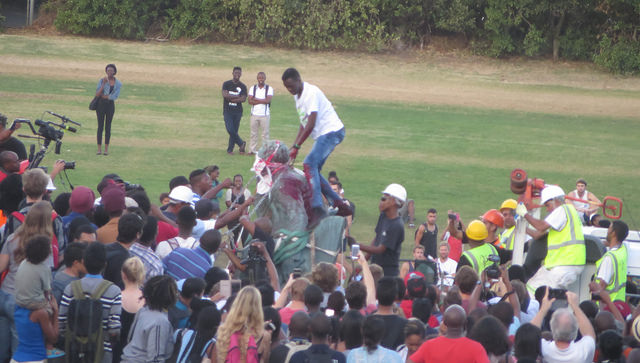 Before Ukraine descended into civil war this year, students from the country banded together in opposition to Russian propaganda. In January, students from several Kiev universities recorded a video condemning the information wars plaguing both countries, and imploring their young Russian counterparts to fight for free-thought and work with them against state-driven bias.

“We are students and the strength and future of the nation,” one student in the video (below) explains. Featuring several young people speaking directly to the camera, they explain, “We encourage you to be the best and to understand misinformation. Check, think, doubt.”

The video came on the heels of a series of high-profile scandals involving Kremlin propaganda against Ukraine, including a story reported on state-run television which claimed a child was crucified in a town-square in front of a baying mob of locals. The story was exposed soon after as being entirely fictitious.

Russia quickly retaliated against the students’ efforts. A nearly identical video released in February featured individuals claiming to be Russian students from Kaliningrad (though this was quickly disputed) and accusing Ukraine of distorting the truth about their own country.

Fighting the threats to pacifism in Japan

Japan’s constitutional identification as a pacifist state became muddled this year when conservative prime minster Shinzo Abe introduced broader flexibility to the rule. Formed following the tragedies of Hiroshima and Nagasaki, the post-war constitution pledges that the Japanese “forever renounce war as a sovereign right of the nation.” But Abe added a new post-script, allowing for “collective self-defense,” a vague term if there ever was one.

As a result of the move, October saw hundreds of young Japanese flock into Tokyo’s iconic Shibuya crossing to protest the changes. Hitting the most heavily-photographed area of the city, student activists held what amounted to an enormous street party, with protestors, local DJs and street-sellers coming together to rally against perceived threats to peace. Similar events occurred outside of Abe’s home in Tokyo, initiated by the Students Emergency Action for Liberal Democracy, an activist group seeking to protect Japan’s liberal foreign policy.

Not only did the protests signal the reluctance to embrace any threat of war, but it also marked a groundbreaking generational shift. “They’re not just defending constitutionalism or a liberal democracy,” said politics professor Koichi Nakano to the BBC. “They’re starting to push the political spectrum to the left, something we haven’t seen in decades.”

Emma Sulkowicz’s mattress art project quickly became one of the year’s most iconic images. For the entirety of her final school year, Columbia University student Sulkowicz carried a 20kg mattress with her when on campus, as a symbol of the rape she experienced at the start of her sophomore year. Despite filing a complaint to the university, along with two fellow students who also claimed to have been sexually assaulted by the same student, Columbia heads determined there was too little evidence to investigate further. Sulkowicz used the mattress as a physical embodiment of the memory she had been forced to carry around with her, carrying it with her until her graduation.

Sulkowicz emphasised in interviews that Mattress Performance was an art project as opposed to an example of student activism, but it brought wider attention to the prevalence of rape culture in the lives of young people. The handling of rape allegations in universities was widely condemned, while the graduation ‘finale’ to Sulkowicz’s project, in which university president Lee Bollinger appeared to refuse to shake her hand during the ceremony, drove home how institutional the problem remains.

In late 2014, Sulkowicz spoke of the power of student activism to New York Magazine, saying “Universities are filled with people who are progressive thinkers. We have so many intelligent students who think about and care about this issue way more than any of the administration.”

Linkedin
RELATED ARTICLES
OTHER ARTICLES
After building his reputation covering the US civil rights movement in the 1960s, the photographer went on to produce some of the most enduring images of the past century.
After blocking the Scottish government’s gender recognition reform bill, Westminster is now devising further changes to the law to make it harder for trans people to self-identify.
Campaigners reflect on what the supreme court’s decision to allow buffer zones in NI means for the future of reproductive rights in the UK.
The pro skateboarder withdrew from the 2020 Olympic Games so he could come out as trans. Now, he’s hoping to encourage others to live as their authentic selves – within the sport and beyond.
Photographer Sean Maung reflects on documenting a small town in Pennsylvania afflicted by high levels of unemployment, poverty, violence, crime, and addiction.
Mass crustacean die-offs in the North East have led a community of fishermen to take action to save their seas.