News & Politics / In Belarus, victims of sexual assault have nowhere to turn 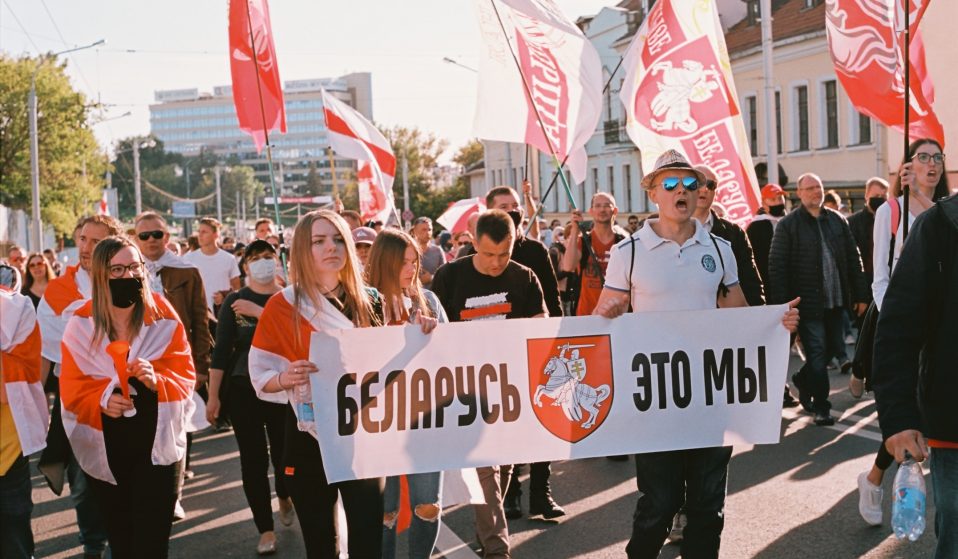 The government’s brutal crackdown on NGOs has left victims of rape without anywhere to seek help. And now, as the country plays a key role is Russia’s war, things are only getting worse.

The government’s brutal crackdown on NGOs has left victims of rape without anywhere to seek help. And now, as the country plays a key role is Russia’s war, things are only getting worse.

In Southern Belarus, near the Ukrainian border, Russian troops are stationed throughout small towns, awaiting orders to invade Ukraine. In early March, Anya*, a 20-year-old woman from Belarus, claimed that while walking home after meeting with friends, she was grabbed by the hair and forced into a car, before being raped by multiple Russian soldiers.

After the attack, Anya posted about her experiences to a channel dedicated to human trafficking and sexual violence on the instant-messaging service Telegram. “They told [me] if I scream, they will kill me,” she said. “In the car, there was a smell of [alcohol]; they were drunk. I don’t wish to remember in detail how they were raping me. It is horrible. I’m waking up at night because of nightmares.” Anya recalled how after the assault the soldiers went through her belongings, taking her money and jewelry. Then, she says the men threw her and her phone out of the car. She claims to have been told the soldiers would kill her if she speaks up and that she was too scared to go to the police.

Afraid and desperate for help, Anya contacted a sexual assault hotline. But when she called, she was told by a human rights defender that the aid network had shut down out of fear of persecution by the Belarusian government. She felt as if there was nowhere to turn.

Grassroots organisations in Belarus provide a vital service to victims of sexual violence. In a country where human rights are being stripped away daily, and reporting rape to the police can result in further assault, turning to sexual violence support groups provides a safe way for victims to seek medical, physical, and psychological help.

However, over the past two years, these organisation have been steadily decreasing. In 2020, Belarus was been rocked by protests when Alexander Lukashenko, in power since 1994, was declared the landslide winner of a 9 August election amid claims the vote was rigged In the months that followed, 800 people were imprisoned on political grounds and more than 275 civil society organisations and independent media outlets were liquidated by the government. As a result, the number of activists offering to support victims of sexual violence decreased because of the fear of imprisonment.

Since the start of the Russia-Ukraine war, things have only gotten worse. Belarus and Russia have long-shared a close relationships. The two countries are in close proximity, and although Belarus gained its independence from the Soviet Union in 1991, the country is almost entirely Russian speaking, and shares cultural links with Russia. In addition, the Belarusian and Russian military work closely with one another. Over the winter, 30,000 Russian troops gathered in Belarus and since then, Russian troops in Belarus have invaded Kyiv, launched missiles, while injured soldiers are evacuated to the country.

Horrified to see how 🇷🇺 continues to use Belarus to attack 🇺🇦. At least 25 missiles were launched from Belarus targeting Kyiv, Chernihiv & other cities this morning. Lukashenka can't fool anyone. He is guilty of crimes against Belarusians & Ukrainians & must be held accountable. pic.twitter.com/UAdq7XVDD2

When the war in Ukraine began, the remaining NGOs were liquidated – many forcibly shutdown by the government – with human rights defenders fearing that they could be harmed for helping rape victims. The fear of speaking up against sexual violence and providing aid intensified on 13 May, when Lukashenko signed an extension to the death penalty, including any “planning” terrorism acts, according to the UN special rapporteur on the situation of human rights in Belarus, Dr. Anaïs Marin. The international community fears that this vague definition might include actions aimed at fundamental human rights, such as free speech and opposing Russia’s war in Ukraine.

Responding to this, Marin issued a letter of Opinion alongside other UN Special Procedures mandate-holders pleading that the UN interfere with Belarus’s plans to extend the death penalty. Marin cited a comment from the House of Representatives of the National Assembly, which says the purpose of the Belarus amendments was “to exert a deterrent effect on destructive elements, as well as to demonstrate the state’s resolute struggle against terrorist activities”. Marin writes in her letter to the UN that the “Act of Terrorism” is “vaguely and ambiguously worded and could potentially cover activities such as expressing dissent and the defence of human rights”.

The new law has made those already fearful of speaking up in Belarus even more afraid. Marin believes that the “Act of Terrorism” could be used to target anyone who speaks out against Belarus, including activists and journalists, and that “the potential to restrict and infringe upon the enjoyment of rights and freedoms in absolute ways including exercising freedoms of expression, opinion, and assembly”.

Human rights defenders once worked to connect psychologists, medicine, and other forms of aid to survivors. Before the war, Vera*, a human rights defender, says that those working to support women knew that they could be arrested at any time for what she deemed to be “no reason”. However, since the new amendment to the law, they have had to completely stop all of their work as fears for their safety have grown. “Right now, if you are facing sexual violence, there is literally no one you can call,” she says.

Vera says there have been five occurrences of women contacting her organisation’s hotline claiming that they have been raped by Russian troops – but she believes the number of women sexually assaulted is much higher. Some survivors in small towns have turned to hospitals as a last resort, but even doctors are under pressure from the government to under-report or conceal evidence of sexual violence, and turning to the police can mean further harm. Out of the five women with whom Vera’s organisation has been in touch since February, she says none have gone to the police.

Lukashenka has admitted that there is a "brutal purge" of NGOs in Belarus, and in his words, "everything is on fire" all around it.
According to the Lawtrend monitoring group, as of 1 February 2022, the number of forced shut down NGOs reached 344.
1/2 pic.twitter.com/IMpD4AQ52D

“It is common wisdom in Belarus and many other post-Soviet countries too, that a victim of rape can be further traumatised if turning to the police,” writes Marin in an email to Huck. “His or her word will not be taken seriously, and some policemen can be rude. They are not trained to collect testimonies.”

Some categories of victims – sex workers, LGBTIQ people, civil society activists – risk being further abused inside the police building,” says Marin. “The perpetrator [might be a] policeman or a military – this now extends to Russian military misbehaving as they do in Ukraine.”

Like Anya, some people looking for help have turned to Telegram as a source of encryption communication, believing that it is more secure than traditional messaging services, such as iMessage and Whatsapp. In addition, different channels exist on the app in connection with the war in Ukraine. However, now even Telegram is not a safe place for Belarusians to voice their opinions and is being used to target people who voice opposition to the war and imprison them for their beliefs.

On 1 July, a 20-year-old honours student named Danuta Peradnia was sentenced to six and a half years in prison for an “anti-war” repost on a Telegram channel that blamed Lukashenko and Russia’s President, Vladimir Putin, for the war in Ukraine. Preadnia called for protests in the post and spoke out about Belarusian soldiers entering the war. As a result, she was expelled from her university and sent to a penal colony.

According to Marin, many Belarusians are against the war and vocalising that support might result in further oppression. Moreover, with Lukashenko’s support of Putin, Belarusians feel isolated from the rest of the world. Many feel a mixture of shame for Belarus’s pro-Russia support of the war while also feeling like a victim of Russia’s occupation of the country.

While Belarusian citizens and human rights defenders feel they cannot do much to protect their own people, Vera says that many are working to support Ukrainians who have been the alleged victims of rape by Russian soldiers. Vera’s organisation has been sending victims of sexual assault in Ukraine rape kits and money, hoping to impact their lives positively.

“There is Belarus that is run by Lukashenko and his regime and the Belarusian citizens who I think mostly are in solidarity with Ukraine,” says Vera. “The freedom of Ukraine is the utmost guarantee for Belarus to be safe itself. So all of us want Ukraine to be free.”

Linkedin
RELATED ARTICLES
OTHER ARTICLES
From the chip shops, to the bingo parlors and burlesque dancers, photographer Mike Coles remembers capturing scenes of holidaymakers by the English coast.
Last week, Tower Hamlets council removed its nudity-restricting licensing conditions in a huge win for London’s kink community.
A sharp increase in officers armed with the electrical weapon is resulting in serious injuries and deaths.
As the Criminal Bar Association enters its fifth week of action, criminal barrister Russel Fraser explains why the legal professionals have walked out and how action is likely to escalate.
Yesterday, rail workers came together to protest poor pay, working conditions and job cuts in their latest round of strikes.
The author discusses her new memoir, which offers a sobering reflection on the racism and otherness she’s experienced along with a joyful celebration of her culinary heritage.