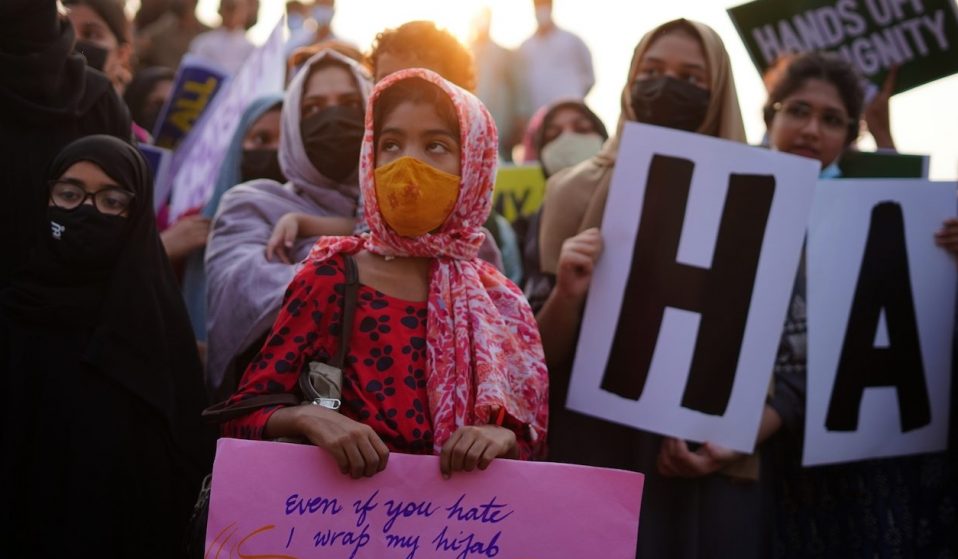 Following a court ruling upholding a ban on Muslim students wearing head coverings in schools, girls who’ve been denied their fundamental rights are fighting back.

Over the past few months, the Indian state of Karnataka has been embroiled in controversy surrounding the prohibition of the hijab in schools. Zakia Soman, an Indian Muslim activist, is exasperated by the government’s double standards. “On one hand, the government is saying beti padhao [‘teach the girl child’, a vocal campaign of the Indian government lead by Prime Minister Modi],” says Soman, “and on the other hand, the government is fighting legal cases just to prevent girls from entering the classroom. It’s not a good sign for our democracy.”

In December 2021, Muslim schoolgirls attending the Pre-University (PU) College in the city of Udupi in Karnataka were told that they must not wear the hijab to school. Despite several pleas, the school refused to budge, stating that the hijab was not allowed as part of the school uniform. “I had interacted with the students who were practising the hijab in their school, [where] hijab was practised by their mothers, their grandmothers,” says Aysha Renna, a Muslim rights activist, about her visit to Udupi. “It was like suddenly, one day, the authorities said to these girls that you are not supposed to come wearing the hijab tomorrow.”

The affected Muslim students did not remove their hijabs, which they consider an inalienable part of how they practice Islam. Aliya Assadi, one of the students, says: “Being a Muslim, I know what the hijab is for me – it is my pride, my identity.” Unable to attend class or sit their exams while wearing the hijab, the girls had little recourse but to protest publicly. On 5 February 2022, the Karnataka state government, headed by the BJP, released a Government Order (GO) stating that schools had the right to impose uniforms to maintain public order and uphold values of secularism, implying that the hijab was responsible for creating disorder. The situation escalated, with videos circulating of boys wearing saffron scarves – symbolising Hindutva (an ultra-nationalist Hindu ideology) – heckling their hijabi classmates. 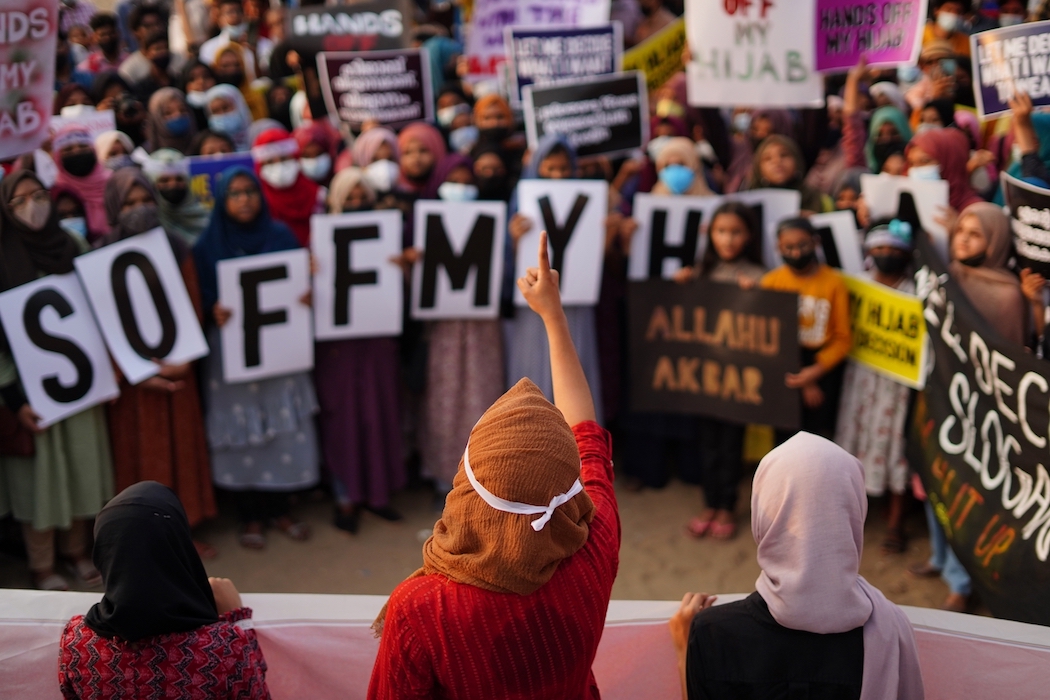 Dr Aparna Chandra, an associate professor of law, identifies the ‘public order’ goal of the GO as cowing to these hecklers. Alongside other legal experts, Chandra has authored a comprehensive assessment of the GO and the legal ruling that later upheld it. “The ‘public order’ challenge [in the GO] is not for the people whose rights are being impacted,” says Chandra. “The public order challenge is that others might take an objection to these women wearing the hijab. That’s literally called the ‘heckler’s veto’ – where my speech is shut down because it may offend someone else… because someone else might create a law-and-order problem.”

Lamis (who asked to keep her surname hidden) was one of the students taunted by boys wearing saffron scarves outside her college’s gate. She is an undergraduate student in Kundapura, a town in Karnataka. Since being verbally harassed by the male students, Lamis has not been allowed to enter her campus wearing her hijab. Her education has inevitably suffered. “I was preparing myself for the examination with the aim of scoring high but now that I am not [being] let in, I feel like all my dreams are shattered,” she says.

While it has been shocking to witness this religious divide unfold in high schools and colleges, the open promotion of Islamophobia by followers of right-wing Hindutva beliefs is nothing new. Hindutva nationalists, many of whom fill the upper echelons of the central ruling party, The Bharatiya Janata Party (BJP), commonly rally around the idea of a Hindu Rashtra (‘Hindu-nation’) that prioritises ‘Hindu’ values. This nation-making project does not place Muslims and other minorities on equal footing with the majority Hindu population. Sedition and anti-terrorism laws have arbitrarily targeted critics, activists and journalists speaking up for minority rights; politicians and religious leaders regularly stoke negative stereotypes through speeches characterised by their hate-mongering; and laws have been passed at the state and national levels that target the rights and interests of the Muslim community. 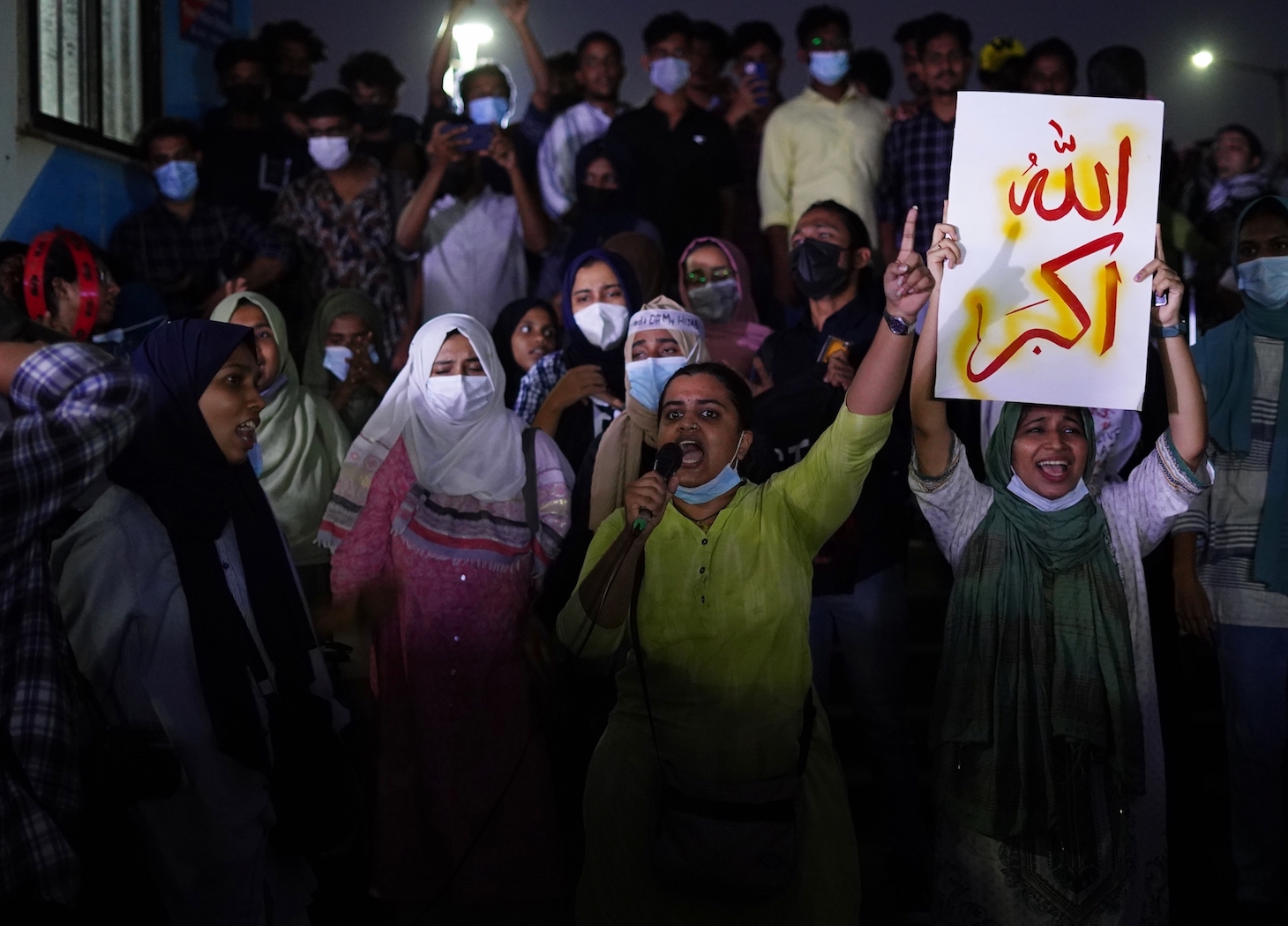 In this context, secularism, too, feels like a hypocritical agenda for the GO to cite. Many Indian politicians and judges wear their religious symbols in public and to their places of work. “From the beginning of the second term of the BJP government, you see an explosion of religion in public life,” says Soman. “We have so many members of the Prime Minister’s cabinet who are in saffron robes.”

The issue is not as much about ‘secularism’ and removing all markers of religion for uniformity as it is about stereotyping and targeting one community’s symbols. There have been reports of schools across Karnataka arbitrarily requiring students and staff members to remove their hijabs before entering premises since the release of the GO. Renna suggests that the authorities have “something against Muslim symbols,” and that the state government’s actions amount to “a fight [against] Muslimness in the country”.

Determined to fight for their rights, six Muslim girls from the Udupi PU College filed a petition challenging the GO at the Karnataka High Court (HC). The petition was ultimately dismissed on 15 March, with the court stating that “wearing of the hijab by Muslim women does not make up an essential religious practise in Islamic faith”, and that the GO was valid.

According to Renna, the bodies “should have consulted with the people who are practising that religion – the opinion of the people should be considered, which didn’t happen in this particular verdict”. Nabiya Khan, a graduate and activist who wears the hijab, points to the national complicity in debating the correctness or essentiality of the hijab. “Harassment of Muslims has been normalised to such an extent that response to the hijab ban is lukewarm,” she says. “Instead of talking about the right of Muslim women to wear what they want, and punishing the harassers, the Indian media is holding debates on merit of hijab, which should be none of their concern.” 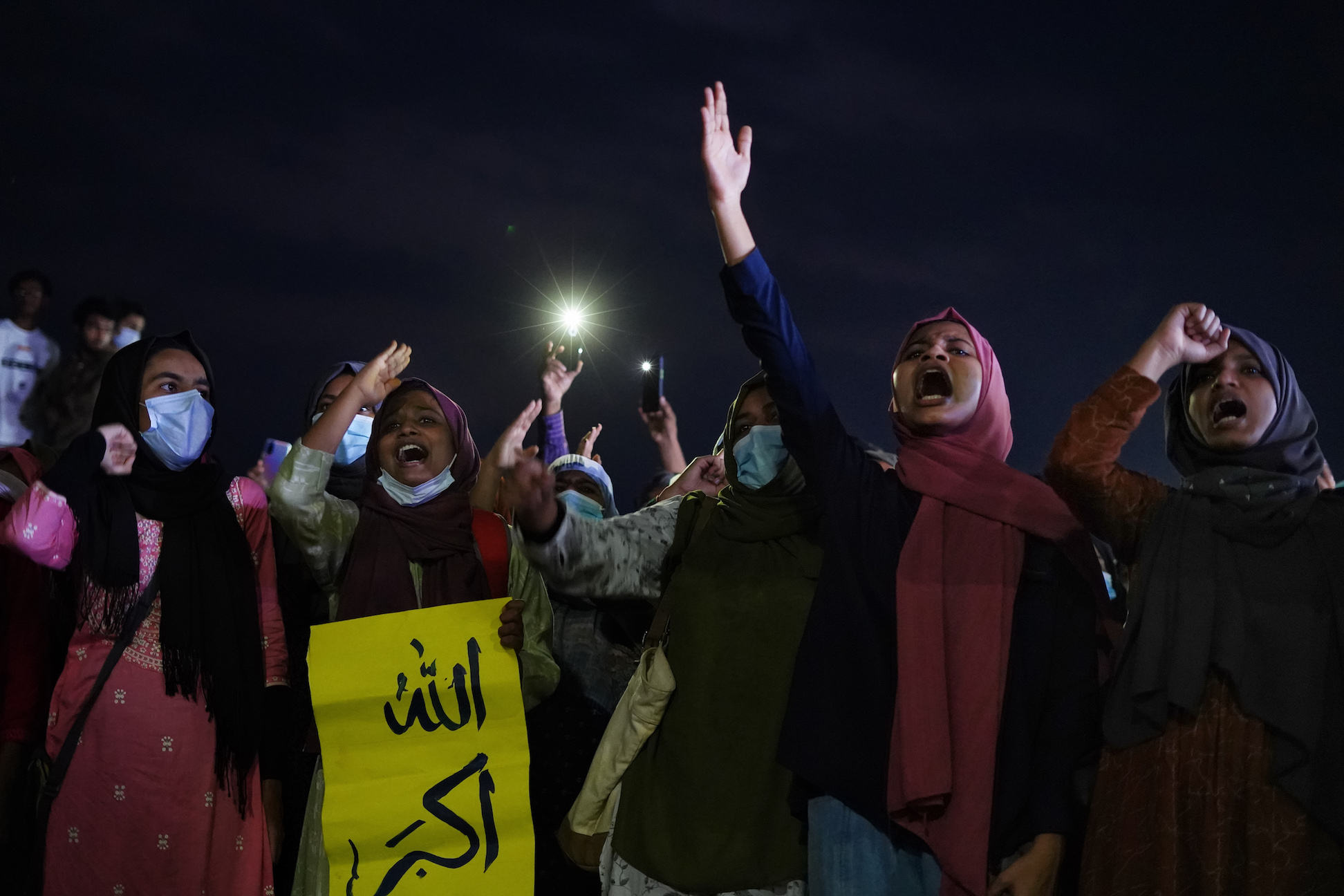 Soman is open about the fact that she “looks at the hijab as a marker of patriarchy and male domination”. However, she also immediately clarifies that every individual’s right to education and freedom of choice should be prioritised. Soman spearheaded the landmark legal case that resulted in the abolition of the Islamic practice of Triple Talaq (instant divorce) in India with the help of her organisation, Bhartiya Muslim Mahila Andolan.

Things are different now, though. Since the abolition of the Triple Talaq, the central BJP government has singled out and targeted Muslims with “cruel and inhumane policies”, actively harming the community through arbitrary laws and arrests. When the BJP government was elected again in 2019, they brought in The Citizenship Amendment Act (CAA) in the same year, which makes provisions for minority religions from Pakistan, Bangladesh, and Afghanistan to gain fast-track Indian citizenship on the grounds of ​ “religious persecution or fear of religious persecution”. The act excludes Muslims from its list of persecuted religious minorities who can seek asylum on these grounds and has been criticised for discriminating on the basis of religion. During nationwide anti-CAA protests in December 2019, 22 Muslims were killed by police firing at protestors in Uttar Pradesh, another BJP-led state. In Delhi, 53 people were killed in peaceful protests that turned into communal violence – 40 of those killed in the violence were Muslim.

As the environment of religious mistrust and hatred spreads, it is young students who are now suffering. As of March, at least 400 students in the district of Udupi are reported to have missed exams as a result of the HC ruling. Even before the legal ruling, Renna saw the fallout of the GO when she visited areas near Udupi. “We went to Virajpat where the students from 6th and 7th grade [around age 10 to 12] have started being denied entrance to their colleges wearing the hijab. In India, until 14 years of age, it is compulsory education for each and every child. But these Muslim girls are denied the ‘compulsory education’ because they are wearing the hijab.” 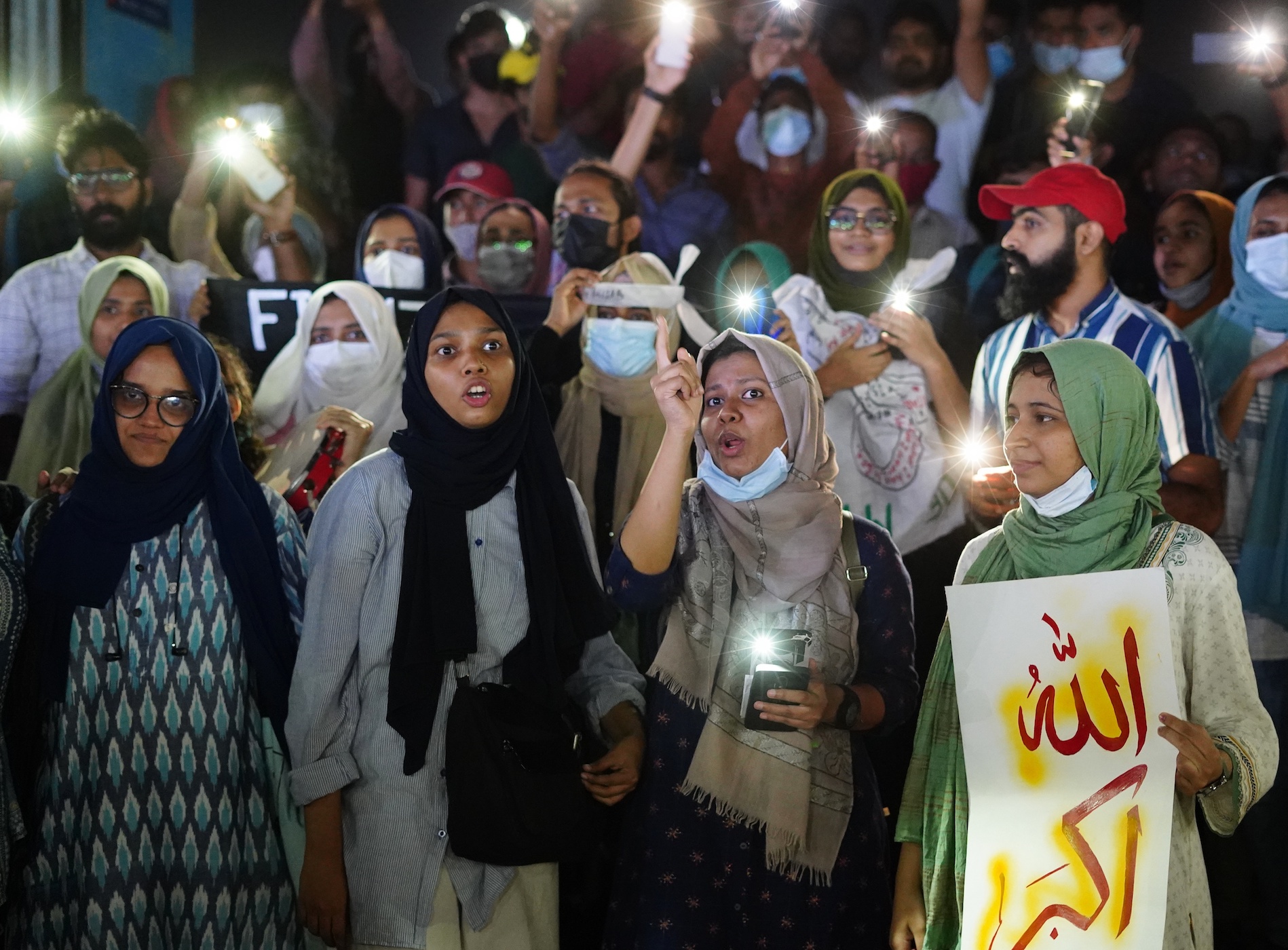 Renna recently completed her postgraduate degree from Jamia Milia Islamia University in Delhi. She tells me that if her school had ever prohibited the hijab, she would have dropped out of education.

Because of the hijab ban, Soman believes that many conservative Muslim families will simply stop sending their daughters to school. And, even, if girls were to attend school without their hijab, it would also be detrimental to their educational attainment. “Meaningful learning happens within a setting where you are safe, secure and comfortable,” she says. These imminent threats come at a time when Muslim women are beginning to get the academic opportunities that would be a stepping stone to achieving upward mobility.

In the hope of overturning the Karnataka HC ruling, the PU College students have now filed a petition in the Supreme Court (SC), the highest judicial authority in India. Many have faith in the fairness of the SC, which has passed several rulings that celebrate and secure individual dignity. But Chandra is less sure, looking at recent examples of the judiciary acting as a political institution. While she holds that the HC ruling should be overturned by any “conscientious” judge, the fact that the SC has refused to grant the girls’ petition an urgent hearing – despite requests to speed up the process so that the affected students can know a verdict before their exams – is deeply concerning. According to Chandra, “There’s been a lot of concern within the judiciary that one way that the Supreme Court decides cases is by not deciding, by pushing off cases.”

Indian media, legal, and political discourse is tangled up in divisive rhetoric. It’s clear that amid this, attention needs to be paid to the most vulnerable victims of the hijab ban: the girls who are being denied their fundamental right to education.

Linkedin
RELATED ARTICLES
OTHER ARTICLES
For over a decade, gamblers have won big by employing people to place live bets from the court. But does this dubious method still work?
Financial turmoil is pushing people who work in the sex industry into more dangerous and desperate situations as a means of survival.
Yesterday thousands gathered outside Buckingham Palace after news of the Queen’s death broke.
A 37-year-old woman shares how her abortion led her to become a clinic worker, and the abuse she’s received in that role.
With skyrocketing rents, packed out viewings, bidding wars and more, renting in London has never been harder.
Thousands attended the annual event this year to wheelie through the city and call for ‘knives down, bikes up’.