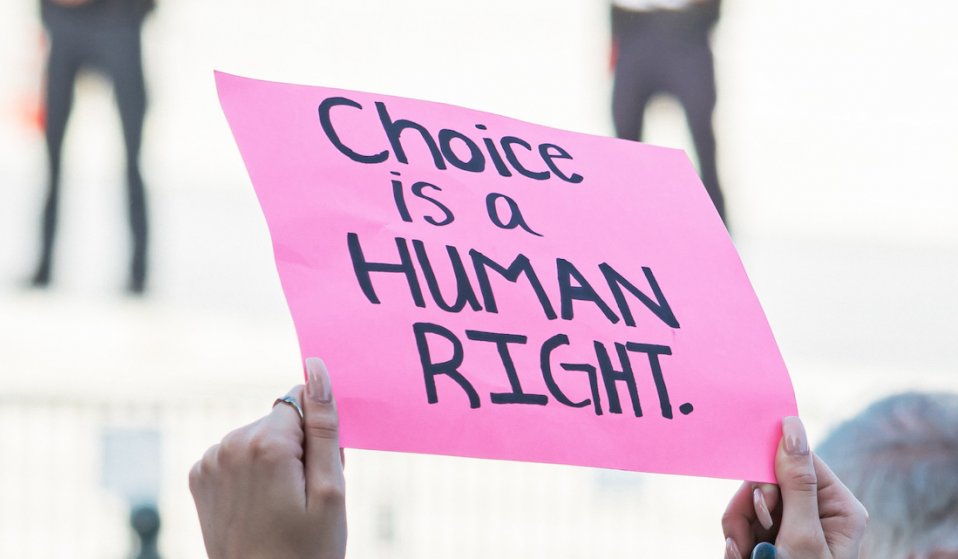 While protests over abortion rights rage in the US, access to abortion services is still almost nonexistent in parts of the UK.

While protests over abortion rights rage in the US, access to abortion services is still almost nonexistent in parts of the UK.

In November 2019, Hannah Deannie, then aged 21, found herself pregnant and in need of an abortion. Although abortion had been decriminalised in Northern Ireland just one month earlier, there were no services available locally and Deannie was forced to travel from Derry to England for the procedure.

“When I found out I was pregnant, I literally just Googled ‘What do you do if you are pregnant and don’t want to keep the baby?’” recalls Deannie. Although there are many activist groups in Northern Ireland set up to help people in Deannie’s position, she wasn’t aware of them at the time. “It was a sheer state of panic,” she says. Deannie was eventually directed to the British Pregnancy Advisory Service (BPAS) who arranged the appointment at a clinic in Manchester and paid for her travel there and back the same day.

Having to travel for abortion services which aren’t available locally is an experience people all around the world can relate to. In the past week, a leaked document about a US Supreme Court decision suggesting it was planning to overturn Roe v Wade unleashed a wave of anger and panic about the future of abortion access in the USA. If Roe v Wade, the 1973 ruling which provided Americans with the right to an abortion, was overturned it is likely that 22 states would immediately move toward banning or severely restricting abortion.

For abortion rights activists all over the world, it showed how important it is not to take these rights for granted. Even in countries like the US where abortion has been accessible for almost 50 years, it served as a stark reminder that these rights can be ripped away in an instant.

British "feminist" : "omg you cannot expect people of the US to travel or depend on online services illegally for an abortion, we must help them!!"

In Northern Ireland, abortion has been decriminalised since October 2019, with abortion services theoretically available throughout the country since 31 March 2020. The near-total ban on abortion which had existed up until this point – a ban which had been found to breach human rights law on more than one occasion – was finally removed following years of political stalemate, high profile court cases, and grassroots campaigning.

While the majority of people in Northern Ireland supported decriminalisation of abortion, the Democratic Unionist Party (DUP), the largest party in Stormont until the recent election, repeatedly vetoed attempts made in the NI parliament to widen access to abortion. In the end, it was Westminster who delivered the changes to the law in October 2019, when the Northern Irish parliament was nearing its third year of suspension.

However, pregnant people in NI are still making the journey that Hannah Deannie had to make to England, with 371 people travelling during the first year of the coronavirus pandemic alone. Despite pressure from the UK government, the Northern Irish health service has so far failed to commission nationwide abortion services, leaving it to individual health trusts to fund these services in their own areas.

In April 2021, the Western Health and Social Care Trust, which serves nearly 300,000 people in Derry, Fermanagh and Tyrone, was forced to suspend its abortion services due to staffing issues, and they have yet to be reinstated. Campaign groups such as Alliance for Choice Derry (A4C Derry) are attempting to fill the gaps left; providing information and support to people who need an abortion.

“We’re in an area where you might have to wait up to 12 weeks to access contraception,” says A4C Derry activist Bethany Moore. “If you get pregnant in that time and don’t want to be, you have no access to abortion either.”

For those faced with an unwanted pregnancy in the Western Trust, the path to accessing safe abortion is not straightforward. Rather than being able to contact their health trust to discuss their options, many resort to contacting activist groups such as A4C Derry.

Abortion is a human right, in the UK it is not treated as such, but instead as an allowance under guarded circumstances.

“We’re on the frontlines here,” says Moore. “We see it on a weekly basis where someone contacts us needing an abortion who can’t access it at home.” According to Moore, people who contact them are generally in the initial stages of pregnancy – a stage at which, if they lived in four of the other five health and social care trusts in Northern Ireland, they could access an Early Medical Abortion (EMA) locally.

As well as in England, people seeking an abortion can also travel across the border to the Republic of Ireland, an easier journey, but the cost of the procedure would be around €450 (£384). The option which is often the most attractive to those who cannot afford to travel is to access abortion pills independently online from an organisation such as Women Help Women.

“These pills were really revolutionary to abortion care here, it makes abortion a lot more accessible,” says Moore. While these pills are safe to take in the first 12 weeks of pregnancy and are the same as those you would receive if you attended a consultation in person, “if you get an abortion at your healthcare trust they’re going to follow up, check-in, provide aftercare, sort out your contraception,” Moore says.

While it is legal in Northern Ireland to self-manage an abortion, or procure an abortion overseas past 10 weeks gestation, many fear judgement when seeking abortion aftercare from their local healthcare providers. When Deannie returned home from Manchester, there was no possibility for physical aftercare, and when she suffered complications, she was forced to go to her nearest hospital in Northern Ireland, where she was concerned about the response from staff to her situation.

“I was definitely a wee bit scared; I didn’t really know what the situation was with abortion in Northern Ireland at that time,” Deannie says. “I had to explain to everyone I encountered there what I’d just done, and all of their reactions were different and some really unsympathetic.”

In the other four Northern Irish health trusts, where Early Medical Abortions are available for up to 10 weeks, the lack of a centralised system means that the information about these local abortion services is often not clearly signposted.

“I always say you shouldn’t have to be a pro-choice activist to know what services are out there,” says Moore. “We still get asked sometimes, ‘Will I have to pay for this? Is this still illegal?’”

Worryingly, some of these information gaps are also being filled by anti-abortion activists. Bogus abortion clinics such as Advocate Women’s Centre in Derry and Stanton Healthcare in Belfast use unnecessary scans and waiting periods to delay care until the person has passed the legal gestational limit.

While the previous government failed to commission abortion services across Northern Ireland, the recent assembly election has provided an opportunity for change. In the weeks leading up to the election, A4C Derry conducted a survey asking all MLA candidates their stance on abortion regulations in Northern Ireland. According to their calculations, following the election on 5 May, 49 out of the 90 seats returned to Stormont are now held by a pro-choice politician.

As commissioning abortion services lies entirely within the remit of the health minister, a pro-choice politician in this position could make a real difference in getting these services in motion.

However, just as many American abortion activists have stated following the Supreme Court leak, abortions will always take place regardless of the legal situation in that country. “Personally, I don’t think anyone in Stormont is going to be our saviour, we do that for each other,” says Moore. “No matter what happens in Stormont, the community organising will continue, and it has done for a very long time, regardless of who’s been in power.”

Linkedin
RELATED ARTICLES
OTHER ARTICLES
A group of young Palestinians have found temporary freedom in the act of parkour, reimagining wreckage and ruins as a series of high-octane playgrounds.
A new project is documenting formerly incarcerated people as they transition back into civilian life.
Thousands attended the annual event this year to wheelie through the city and call for ‘knives down, bikes up’.
Rogue landlords are exploiting young and inexperienced renters and leaving them in mental and financial turmoil, reports Niall Hignett.
A 37-year-old woman shares how her abortion led her to become a clinic worker, and the abuse she’s received in that role.
In his 2008 series, the photographer pictured himself as Angela Davis, Martin Luther King Jr., Malcolm X, and other prominent figures.