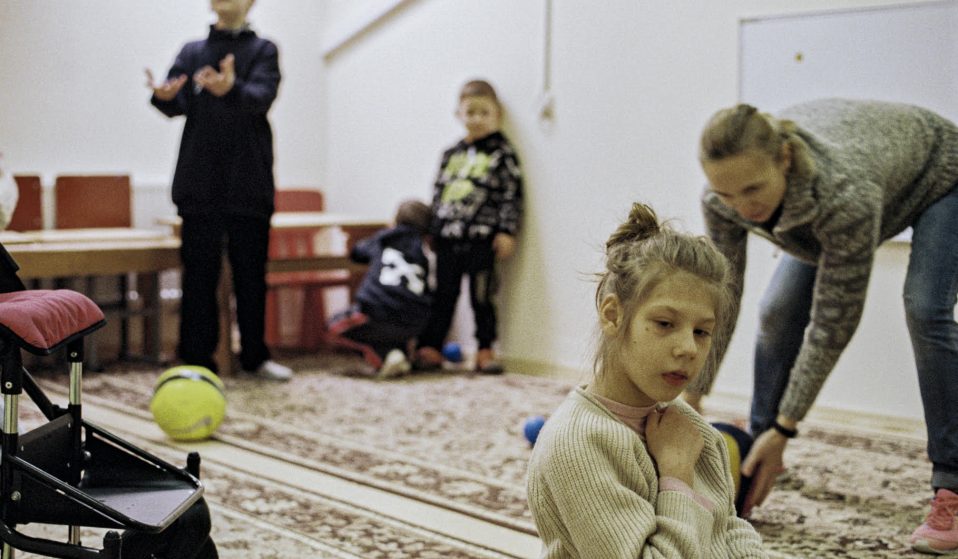 As the Russian invasion continues, people with disabilities and their families are facing even greater hurdles than most Ukrainians trying to reach safety.

As the Russian invasion continues, people with disabilities and their families are facing significant hurdles to reaching safety. Many are now fearing they will be abandoned and left behind, reports Eva Clifford.

Natalia Komarenko was asleep when the first explosions began. It was just after 6am on 24 February 2022, and she’d woken to find her city under attack from Russian forces. For Komarenko, a mother of three children – one with a severe disability – with two elderly parents, she knew that the risks of evacuating were too high.

As thousands fled, Natalia had no other choice but to remain in her native Kyiv, where she is currently sheltering with her family. Beneath their house is a bomb shelter, but they have never been down there – not yet. “We are hiding in the corridor of the apartment, in the bathroom or the toilet,” she says. “For now, we think it’s safer for our younger child, who is scared.”

Unlike his sister, Volodymyr (nicknamed ‘Vova’) – Natalia’s 17-year-old son – does not react to the explosions outside, or to the air raid sirens which wail across the city several times a day. Instead, he listens to music and builds towers out of cubes. “Our Vova does not understand the situation,” says Natalia, “that we have a war, that our lives have changed completely, that there are rockets, deaths, destroyed cities and bombs. Maybe it’s good that he doesn’t understand all this horror.”

Vova is diagnosed with Opitz-Kaveggia syndrome, a rare genetic condition that causes serious intellectual disabilities. Although he can walk, Vova has orientation issues and takes medication to prevent epileptic seizures, which can occur at any time. His condition means that he needs constant care. But now, in the midst of war, his family is facing impossible challenges.

“We can’t evacuate him by train, because at any moment, he might have seizures and his temperature may rise,” says Natalia. “It is also dangerous to drive a car, because enemy Russian tanks shoot at civilian cars.”

Public shelters are not an option either for many disabled people, as they are often situated underground with no accessible entry for wheelchair users. For those with complex conditions like autism, the shelters are rarely equipped to meet their needs.

The Komarenko family faces yet another obstacle: they’ve been unable to obtain essential medicine for Vova, including anticonvulsants (Levetiracetam and Lamotrigine) – drugs that he has been taking since the age of 10. Without them, his condition is life-threatening.

Despite her own challenges to deal with, Natalia – who heads a charitable organisation called Z teplom u sertsi (With Warmth in My Heart) – is continuing to help other families like hers. “Every day we try to find new contacts of people, volunteers and companies that can donate food, medicine and hygiene products to our families,” she says. “In this way, we distract ourselves from the terrible news and save our nerves, which sometimes give way and come out in tears.” 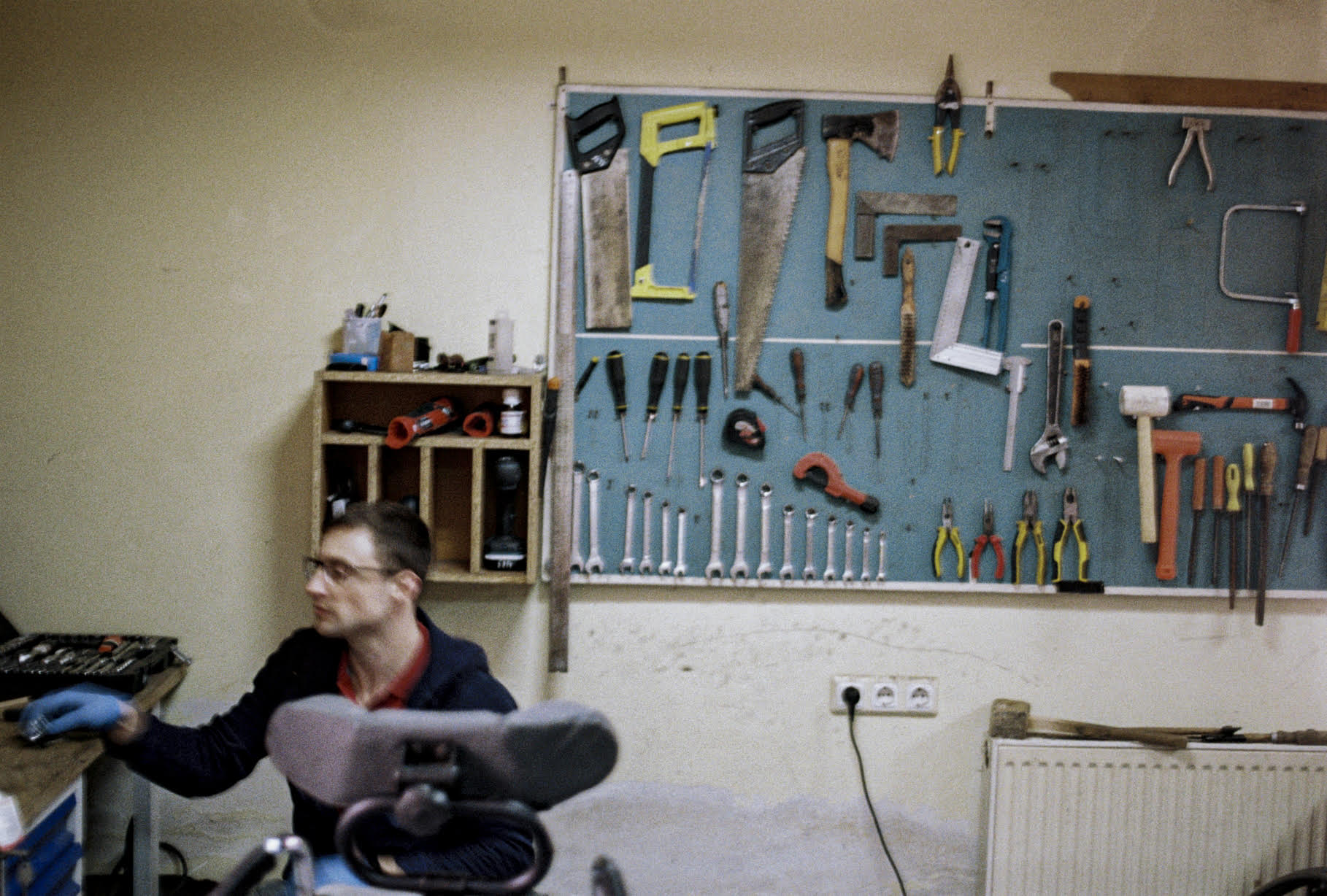 Andre (31) constructs a wheelchair from scratch for the refugee children at the Dzherelo Children’s Rehabilitation Centre in Lviv, by Emma Francis

Natalia’s family are not the only ones trapped in this horrifying situation. Of the estimated 2.7 million Ukrainians with a documented disability, many are at significant additional risk as a result of the war. Already, there have been multiple reports of Russian troops actively targeting centres and institutions housing people with disabilities – including children’s centres. With a lack of safe evacuation routes, those who cannot flee are in danger of being abandoned. Power shortages also mean that those reliant on mains-powered devices such as respirators and refrigerated medicines are in a perilous position.

Another problem is that critical information regarding safety and evacuation is rarely circulated in accessible formats, such as Braille and sign language, making it extremely difficult for people with disabilities to understand their options and prepare accordingly. For those who do manage to evacuate, they find that shelters and transportation at the border are not accessible.

When Olia, 29, first heard of the war, her immediate response was panic – mostly out of fear of what might happen to her children, one of whom has cerebral palsy. Before she left Odessa, her aunt had fled to western Ukraine and her parents encouraged her to run too. The plan was to catch an overnight train with her children to Lviv, 385 miles away. But as her daughter Sophia cannot walk, she was forced to take a wheelchair with her and navigate chaotic, overcrowded platforms. Although it was an incredibly stressful experience, Olia was helped by some Ukrainian women to lift the wheelchair. She then carried Sophia onto the train, where they were packed into a small compartment with several others. “We practically didn’t sleep at all,” she recalls. “It was very hard and terrifying.” 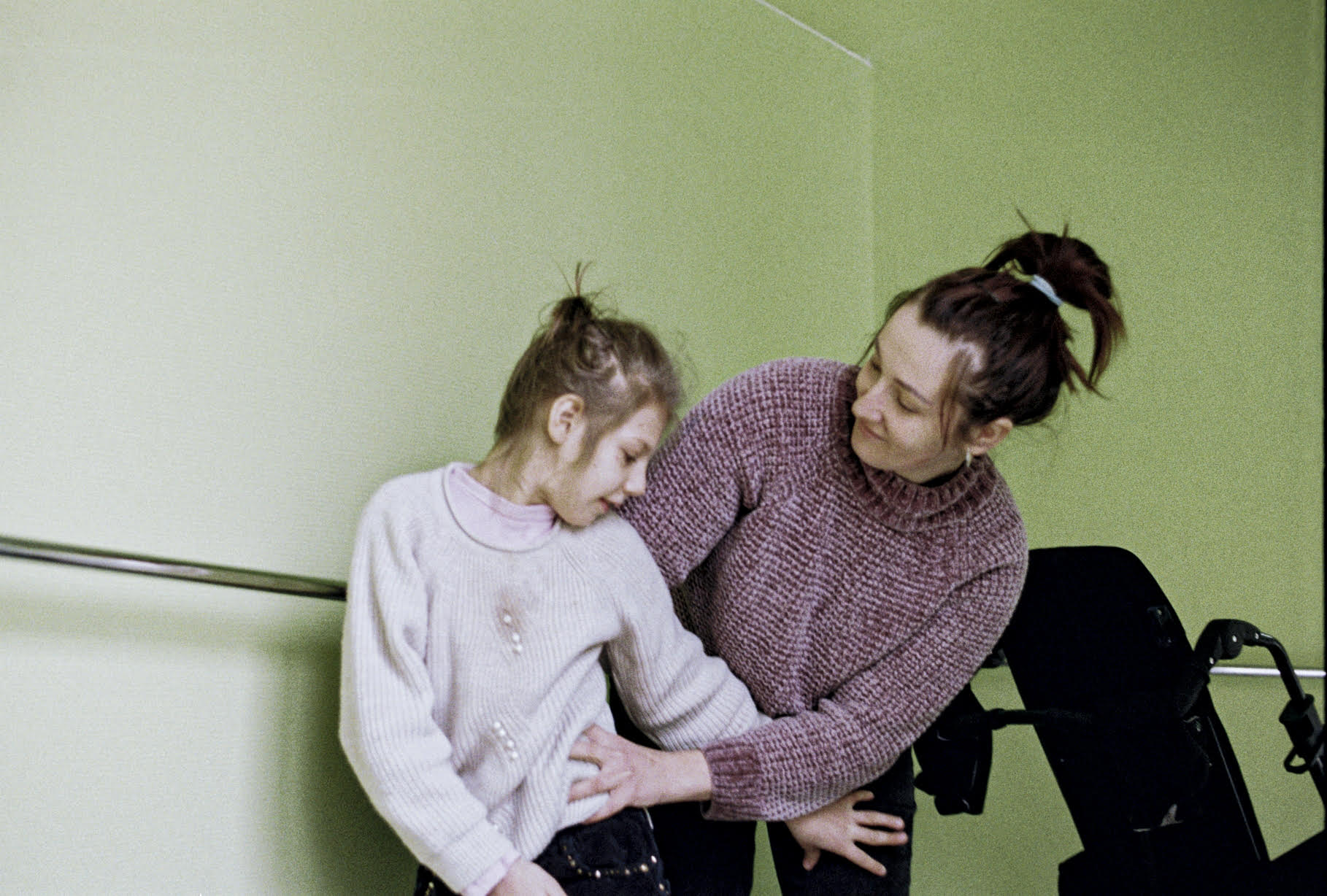 Sophia (9) who has cerebral palsy and her mother Olia (29) play in the hallway of the Dzherelo Children’s Rehabilitation Centre in Lviv, by Emma Francis

For carers of disabled children or people with less visible disabilities, the challenges can be compounded at border crossings. Particularly for Ukrainian men aged 18 to 60, who are being banned from leaving the country and urged to join the military – even those who are exempt.

Oleksandr Nikulin and his partner Denys Kutsekon, who are both HIV positive, knew they had to leave Kyiv when they realised they didn’t have enough life-saving medication. As well as HIV, Oleksandr is visually impaired and Denys has epilepsy and congenital heart disease. With Russian attacks striking near the hospital, the journey there was too treacherous. So the pair decided to flee Kyiv and headed west to the city of Uzhhorod, just two kilometres from the Slovakian border. But when they arrived, despite having all the necessary documentation, they were told by soldiers that they were “not disabled enough” and they couldn’t cross the border. “[They] said to us: ‘If you have no meds, you can smoke cannabis,’” says Oleksandr. “It was so humiliating.”

Their ordeal didn’t end there. Later while walking around Uzhhorod, the police stopped them again, ran a document check and told them they needed to enlist in the Ukrainian military. “Our documents explaining that we were excluded from military duty did not work for them,” says Oleksandr. “They said we could cook or raise ammunition. The situation in Uzhhorod was so dangerous for us. We heard that police were catching men on the street and forcibly taking them into the army. We didn’t go outside for a few days.” 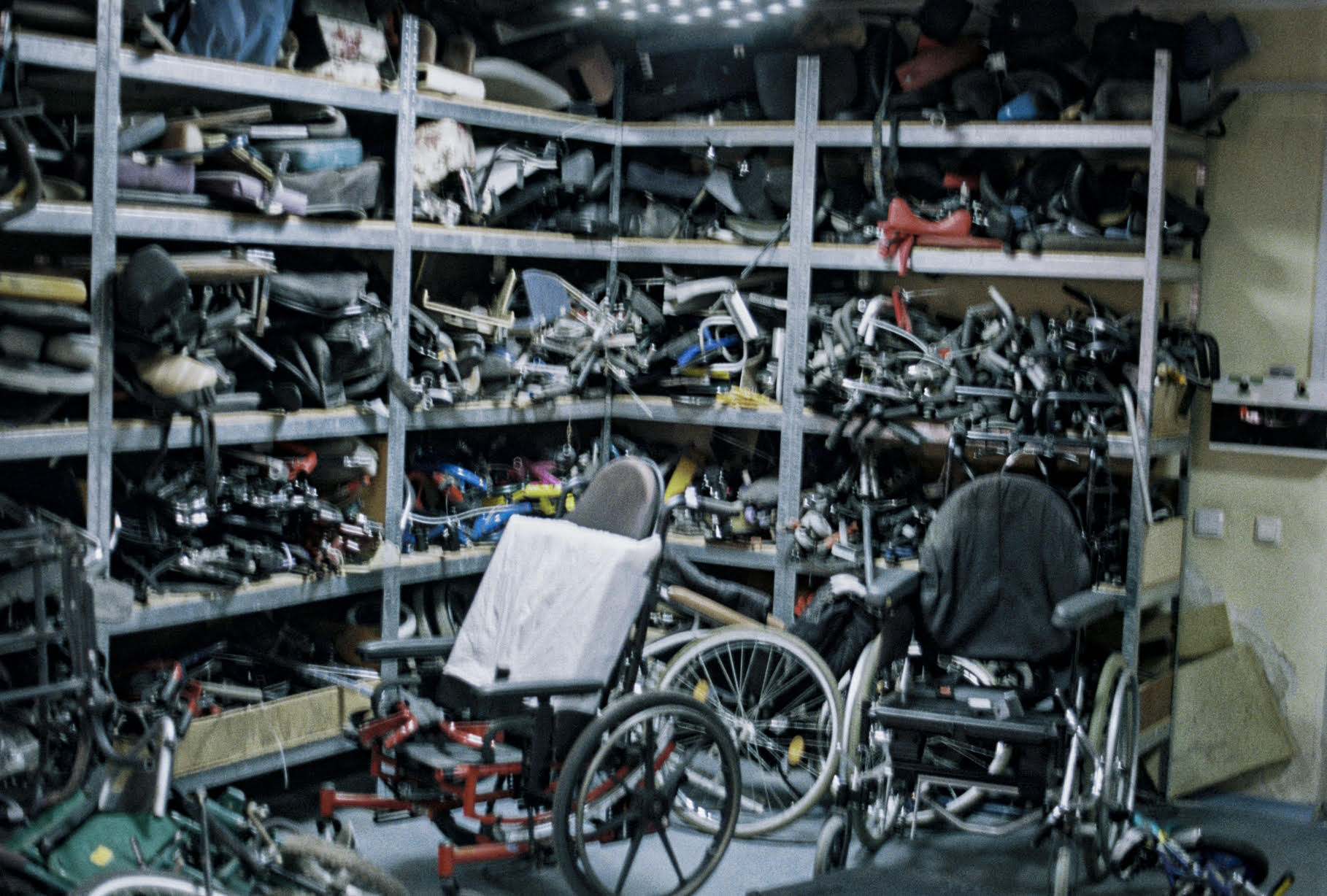 Wheelchairs for children at the Dzherelo Children’s Rehabilitation Centre in Lviv, by Emma Francis

Although they did eventually escape, helped by Fight For Right (a disability-led organisation) who managed to provide lawyers for them, Oleksandr says they were shocked by the military’s treatment of men with disabilities in Ukraine. Now safe in Germany, Oleksandr and Denys are channelling all their efforts into helping other disabled people evacuate, given the sparsity of support from outside the disabled community.

Unfortunately, this is a dynamic that disabled people know only too well. “Stigma is heightened in crisis situations,” says Tash Walker of Legacy of War Foundation. “Although we are seeing plenty of stories of solidarity on the ground, it is easy for people to centre their own needs at the expense of the most vulnerable as the situation becomes increasingly desperate.”

According to Tash, there are reports that people with disabilities are calling emergency hotlines run by major humanitarian organisations, only to be told that “we don’t help people with those needs”. “That is unacceptable,” says Tash, “and it is in direct contradiction to the messaging these NGOs use when soliciting funds.

Now I don’t try to find “correct” and polite words: #international organizations and instruments on emergencies and #armed-conflict are not effective. 2,7 millions of #Ukrainians with #Disability are totally left behind during #RussianWar against #Ukraine️ https://t.co/IZwxgttIu9

“What’s happening at the moment is that disabled persons’ organisations are single-handedly taking responsibility for ensuring (and funding) the wellbeing and safety of people with disabilities in Ukraine. And they are literally crying out for support. Major organisations should be approaching these groups and asking ‘what can we do to help your work right now?’ – and then actually doing it.”

Avery Horne, external coordinator of Fight for Right’s emergency response, adds: “Ukrainians with disabilities are simply being left behind. It is imperative that any humanitarian aid or emergency measures are inclusive and recognise the specific UN obligations of Ukraine towards persons with disabilities.”

Having escaped Odessa, Olia and Sophia remain in Lviv, where she plans to stay for a month with her aunt. Olia doesn’t want to go abroad but realises that she might have to if the war continues. Still, she thinks of those she had to leave behind in Odessa. “I work at a rehabilitation centre and I did not want to leave these kids,” she says. “I hope that the war will be over soon – then I can go back to them.”

Back in Kyiv, Natalia reassures her children daily, despite the uncertainty. She tells them that there is no need to be afraid because together they are strong. They hug often. Her youngest child doesn’t say much but she paints what she sees: explosions, tanks, soldiers, a city once familiar turned alien and strange. Like Olia, Natalia is praying this will end soon. “Of course, I thought about leaving more than once,” admits Natalia. “But while it is possible we will be in Kyiv because here is my home, my country.”

To support Fight for Right, visit their Go Fund Me Page.

For further information about how to help, visit Legacy of War Foundation, which contains a list of grassroots and local organisations in Ukraine that are urgently in need of funds. You can also support their campaign to deliver hundreds of wheelchairs to facilitate urgent evacuations.

Linkedin
RELATED ARTICLES
OTHER ARTICLES
Photographer Phyllis Christopher recalls capturing sex and protest at a time when the city had become a haven for the queer community.
Following the release of his latest album God Don’t Make Mistakes, the rapper talks horror villains, police brutality and being unafraid to show his vulnerable side.
Our new magazine is here, starring the inimitable Mitski. Order your copy now and join us on a trip around the world.
Photographer Robin Graubard’s debut book offers an unflinching record of turbulence and change across the Balkans.
The revered showbiz chronicler recalls his journalistic beginnings, documenting subcultural scraps in the ’80s.
In the latest OFFF Dispatch, the enigmatic designer dives into his process, connecting the dots between his unique and varied creative output.