News & Politics / The Indian women learning to fight for survival 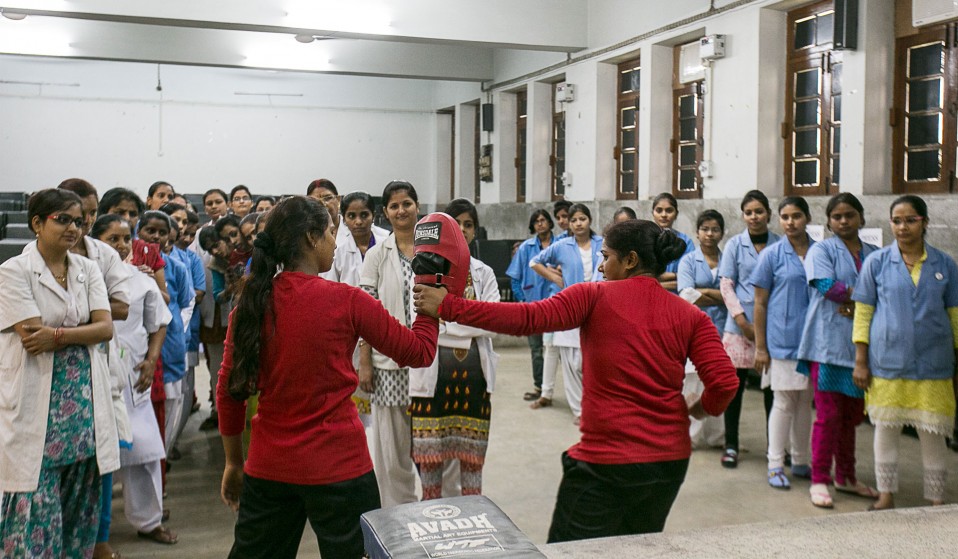 With pepper spray and self-defence classes, Indian women are preparing to fight back against their attackers.

With pepper spray and self-defence classes, Indian women are preparing to fight back against their attackers. Huck meets the woman leading the charge.

There were 24,923 rape cases reported across India in 2012, according to the National Crime Records Bureau. Experts estimate up to 54% of cases in the country go unreported.

This week a 15-year-old girl was raped and set on fire on the roof of her home in the outskirts of Delhi. On Wednesday, days later, she died.

Time and time again we see these stories being repeated, and these are just the ones that make the headlines. In towns and cities across all continents women and girls continue to be attacked. Shruti Kapoor, the founder of Sayfty, is determined that this must stop.

As our crackly Skype call finally starts to become stable, I introduce myself to the inspiring woman at the other end of the line. “I’m excited to talk about my work”, she exclaims, as she breathes deeply and we start talking.

Born in the small Indian region of Kanpur, Shruti is no stranger to the abuse and harassment that Indian women regularly face. “I’ve personally experienced sexual harassment and street harassment – it was just part of daily life growing up,” Shruti tells me, “we were taught to just ignore it, not to talk about it, to just look the other way.”

On 16th December 2012, a 23-year-old physiotherapy intern, Jyoti Singh, was making her way home on a bus in Delhi. There were six men on board, including the driver, all of whom were involved in what came next. Iyoti was raped, beaten and tortured. The attack was fatal.

In many ways what set this case apart from so many others wasn’t the horrific nature of the attack, but the public outcry that so swiftly followed. Women and girls, supported by students, campaign groups and allies, took to the streets with a burning sense of anger – this horrific episode sparked a fire inside swathes of a nation for who so long had been desperate for change.

“That awful attack, the brutal murder of this young woman, was such a sad and unfortunate event, but the uprisings that followed quickly led to awareness; we started to stand up, to say we would no longer stand for it. It was time, enough was enough.” 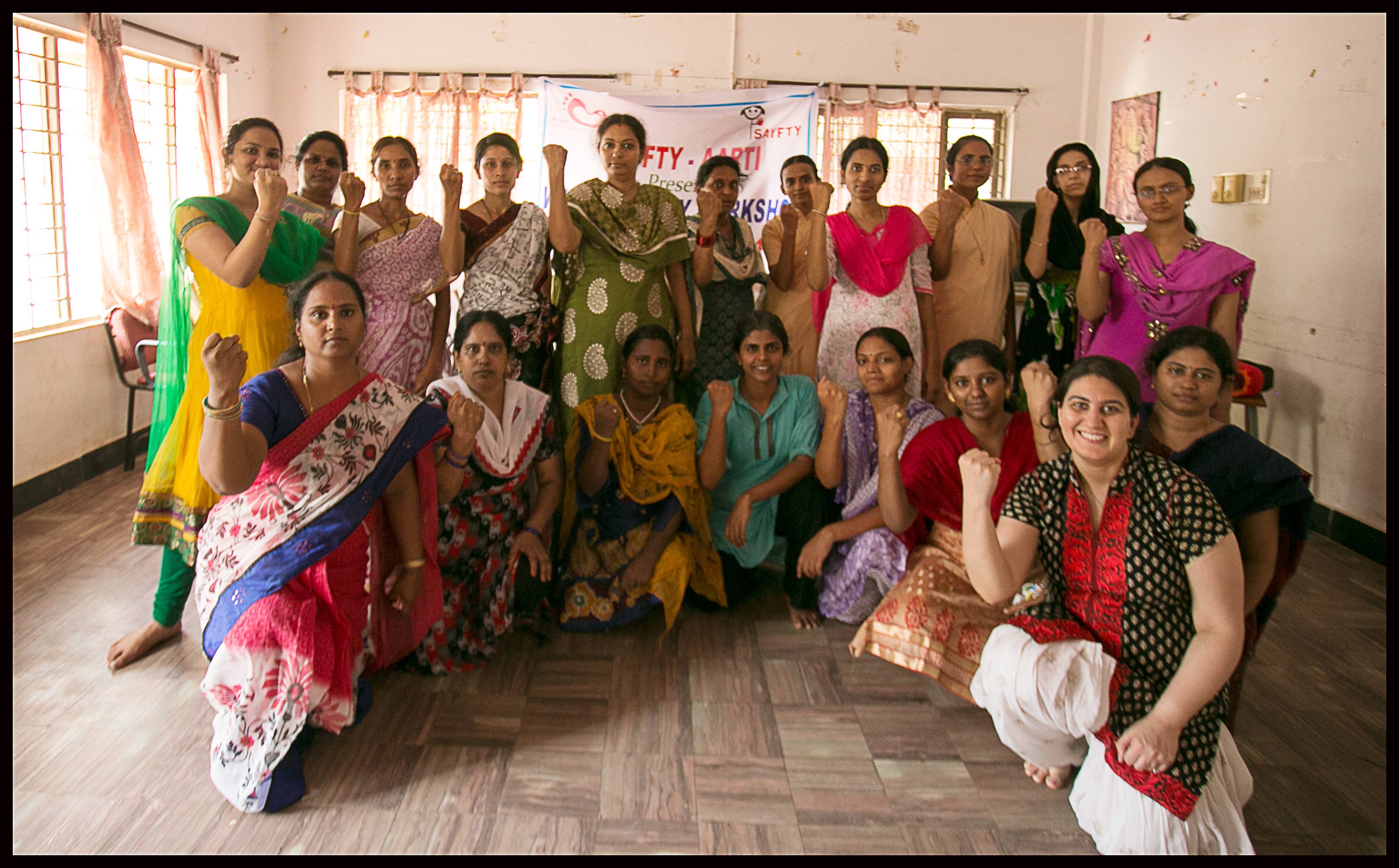 Women at a Sayfty course

I ask Shruti why she thinks violence towards women is so commonplace in India, and she points to two significant factors, although she makes it clear her list is by no means exhaustive.

“India, like many countries, remains a very patriarchal society,” she suggests, taking time to think as she speaks. “Men and boys have a sense of entitlement, but women and girls from an early age are taught to serve – first fathers, then husbands, and then children.”

“There’s also a lack of appropriate laws & poor implementation”, she continues, with an audible anger in her voice as she talks. “We do have laws against rape in the country, but when you get raped nobody does anything about it, if woman is raped, she’s not encouraged to speak out.” Those who do report abuse face a lengthy and arduous judicial process, the slow and draining path to justice sees many refrain from pressing charges through the courts.

It’s all too easy to feel powerless when injustice rears its head. Anger may permeate your body, but finding a productive outlet for that gut-wrenching fury we feel is often tough. Frustrated by the waiting, watching on as attacks on girls and women continued as each day went by, Shruti took matters into her own hands.

Shruti moved fast, and launched Sayfty – an organisation on a mission to educate and empower women in India and around the globe. “Our mission is simple”, she proudly tells me, clearly still excited by the premise of the project she pioneered. “We’re equipping women and girls with self-defence products, and empowering them with self-defence training.” 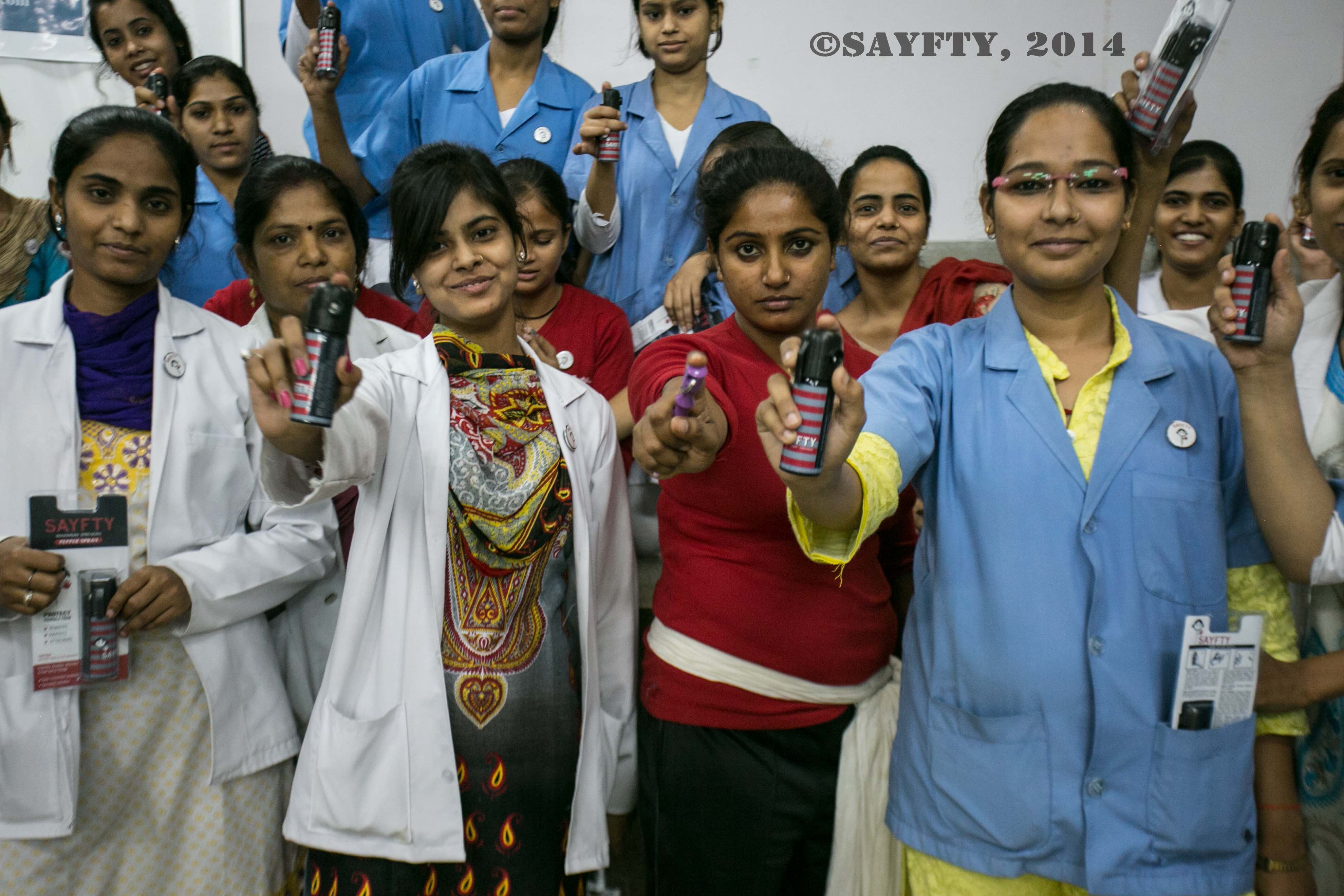 Last year over 500 women attended Sayfty workshops, which can range in length from a matter of hours to sessions spread over two intense days. Focussed primarily on self-defence classes, Shruti quickly partnered with WEDNLIDO, a not-for-profit group teaching self-defence to women and their children in British Columbia. Women are also provided with cans of pepper spray, through Sayfty, just in case.

“The idea is to teach attendees basic skills that they can use on a daily basis to keep themselves safe,” Shruti explains, although there’s plenty of other work going on too. “We’re also providing a space for women to have open debates and dialogue, in an environment where women can speak and share without fear of being judged.” One of the most common and important discussions Sayfty are finding they are having comes when talking about marital rape.

Shruti tells me that many women she works with had never confronted the idea of marital rape; an act that to this day remains legal under Indian law. The project provides an opportunity for reflection.

“We opened up channels to talk about it, some women didn’t know what the definition of rape was,” sighs Shruti.

The courses also include role-plays, participants recreate scenarios they may well encounter, and explore how to set boundaries and different ways to react. From aggressive partners to harassment on the bus, it’s an opportunity to talk through the possible responses that one might have.

“The first time we did the training was in a remote area in southern India,” says Shruti, when I ask if she’s seen signs of success. “The women who joined us mostly come from very conservative families. We did a two day workshop, and at the start most didn’t feel they had the strength to protect themselves, or the voices to speak up.”

Over a 48-hour period, Shruti and her team witnessed a moving transformation. “When we said our goodbyes, women left with confidence they could do something about their safety. It’s not to say they can do everything, but we had more awareness, more alert of what they were capable of doing.”

While NGOs and campaign groups are working hard to lobby government and law enforcement to take a stand, the women behind Sayfty see an urgency that just cannot wait.

“I think the reason I feel so strongly about training is that it gives us control,” Shruti continues. “I, as an individual, am actually doing something about my own safety. Sure, the law can change, but it just doesn’t move as fast as we need it to.”

This acceptance that laws and attitudes don’t change overnight may seem glib, but in reality it’s simply practical, and an approach that’s saving lives.

“Soon change will come, but in the mean time learning self-defence or carrying pepper spray, keeping yourself aware and informed, are my ways of protecting myself”, Shruti suggests to me, “I know it will keep me safe, without having to rely on anyone.”

Reassured by their reception, Sayfty have expanded to campaigning online, running a weekly #sayftychat on twitter for experts to give advice and support from time to time. “We’ve managed to run over 40 sessions in the past year alone”, Shruti smiles, “speaking to women and girls from around the globe.” 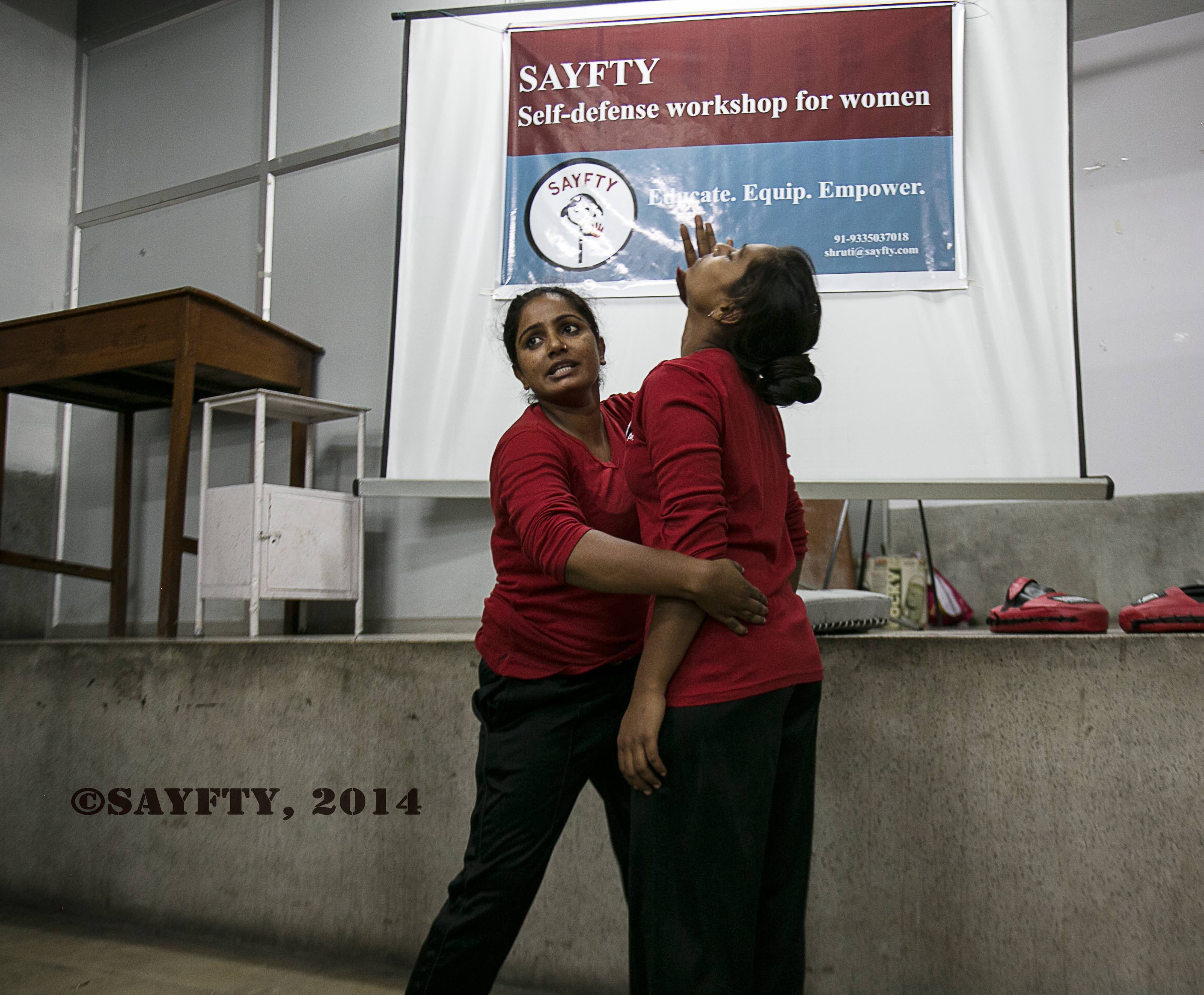 There’s no doubting that structural reform and a shift in attitudes are being called for in India, but Shruti is clear that women’s safety is an issue of international significance.

“It’s not just a problem in developing countries, rape and street harassment are also rife in the UK and U.S. too”, she says calmly, “ and until it’s eradicated, you’ve a responsibility to take action in your own backyard.”

It’s for this reason that Shruti wants to see Sayfty go international to provide training to women across borders – her ambitious, but she assures me achievable, goal. The power in her voice as we’re speaking makes me inclined to believe her.

“I want to see the project in every country,” she firmly tells me, as our time speaking comes to a close.” We have started with India, but women and girls need this training and equipment everywhere. This is my objective, and we will make it so.”