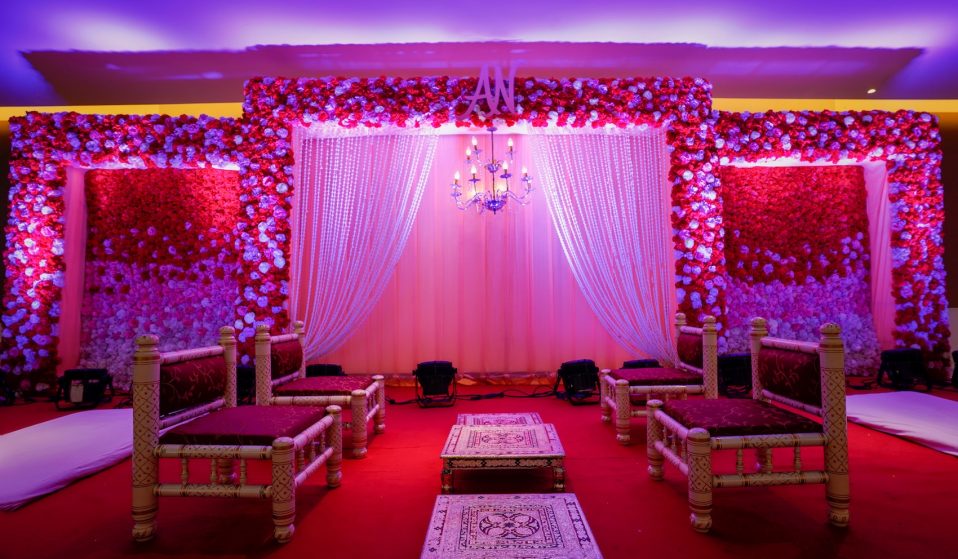 A centuries-old tradition is offering families a way to honour the deceased, reports Arbab Ali.

While it has become far less common, a centuries-old tradition is offering families a way to honour the deceased, reports Arbab Ali.

Earlier this year, Arun Kumar, age 36, posted a tweet about attending the wedding of his cousin, Shoba Kulal, which subsequently went viral. In the post, Arun explained that this wedding was no ordinary wedding. This was down to one main reason: the bride and the groom are both dead. Shoba had died when she was just an infant, while the groom, Chandappa Kulal, had also died during infancy.

The marrying off of deceased children – also known as ‘Pretha Kalyanam’, which literally means ‘dead marriage’ – is a custom still prevalent among several communities in Kerala’s Kasaragod district, especially in village bordering Karnataka. The custom has been around for centuries, but owed to Arun’s post, it’s recently received a new wave of attention.

I'm attending a marriage today. You might ask why it deserve a tweet. Well groom is dead actually. And bride is dead too. Like about 30 years ago.

And their marriage is today. For those who are not accustomed to traditions of Dakshina Kannada this might sound funny. But (contd)

Pretha Kalyanam is always conducted between a bride and a groom who died as babies or teenagers under the age of 18. Arun says that the deceased infants are wed only when they reach the expected marriage age, which is usually when the male infant turns 25 years and the female infant turns 22 or 23 years old. (Although it can be later: Shoba would’ve been around 27 years old, while the groom was around 30 years old.)

Shoba died in the mid-1990s when she was just 27 days old. “She choked on food. There was no transportation back then and this was a village. By the time we somehow managed to get her to the hospital, she’d passed away,” says Shoba’s mother, Jayanthi Kulal, age 60. Chandappa died of an illness when he was just seven days old.

For Manithar Koragappa Moolya, the father of Chandappa, seeing other parents attend their children’s weddings used to be fraught. But since the Pretha Kalyanam for Chandappa, this has changed. “I found that chance to get my dead son married with Pretha Kalyanam,” he says.

Seethakka, the mother of the groom, was initially reluctant to marry off her deceased son. “I worried about what others might think,” she says. She kept pushing off the idea, but was eventually convinced by Manithar. Her fears of what others might think has largely proved to be unfounded. “After my son’s Pretha Kalyanam, other parents whose children died young are also considering it,” she says.

Naturally, those who practice Pretha Kalyanam tend to believe in an afterlife. “We don’t believe the dead are dead. They walk among us in spirit,” says Arun. He adds that if the deceased’s soul is happy, they’ll take care of the family and bring good fortune to the family. On the contrary, if their soul is unhappy, it will bring bad luck. “So, to alleviate bad things from happening to a family, families get their dead children married,” Arun explains.

Finding the right match isn’t always easy. Prior to meeting Shoba’s parents, Chandappa’s family had rejected a marriage proposal because the bride was a few years older than him. And, just like in a normal Hindu marriage, the caste and the gotra (the lineage segment within an Indian caste) must be taken into consideration.

The match between Shoba and Chandappa took place after a normal wedding, when Jayanthi was approached by someone who told her about another family she knew of who were looking to get their dead son married off. Jayanthi says that they did not have plans to get Shoba married, but they thought it best to ensure good luck for her own family. So, Jayanthi eventually got in touch with the family of Chandappa. Talks between the families and the wedding were all done within a month’s time. 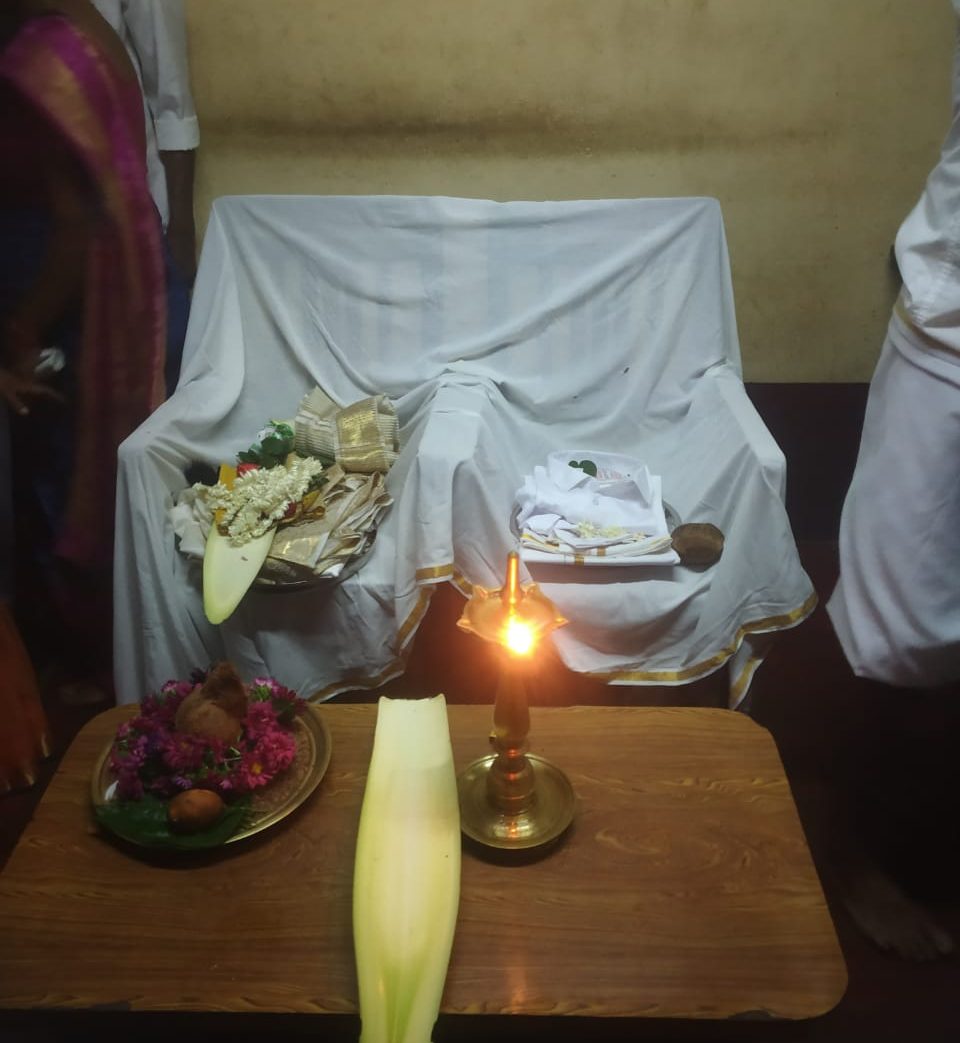 Effigies of Chandappa and Shoba

There are some distinctions between the rituals which form part of Pretha Kalyanam and a usual Hindu marriage. “The rituals under this marriage resemble marriages done a hundred years earlier,” says Arun. “Instead of giving gifts to the married couple like in a common Hindu marriage, here we give coins as blessings just like in older times.” Clothes, dolls or effigies representing the deceased couple are used in the ceremonies. These are usually home-made, and fashioned from clay or straw, and decorated.

But otherwise, the marriage plays out fairly similarly. The families go to each other’s houses for the engagement. After the engagement, a marriage function is held. First, the groom’s family brings the saree to be worn by the bride. “The bride’s family dresses up the bride’s effigy in the wedding saree and during that time the groom [effigy] waits in the next room,” explains Arun.

The sleeve of the groom’s shirt is tied to the bride’s pallu (the loose end of a saree, worn over one shoulder or the head). Then, the effigies of the bride and groom are lifted by the relatives. Later on, the couple perform the ‘saptapadhi’, which translates to ‘seven steps’ (the family members will pick up the effigies to take the steps). After this, the couple legally become husband and wife.

“This is the most emotional part of the entire marriage ceremony,” says Jayanthi. Despite the circumstances, the atmosphere of Shoba and Chandappa’s marriage was jovial as any other marriage. “Family and friends kept cracking jokes and laughing. It is a celebration,” Jayanthi says. 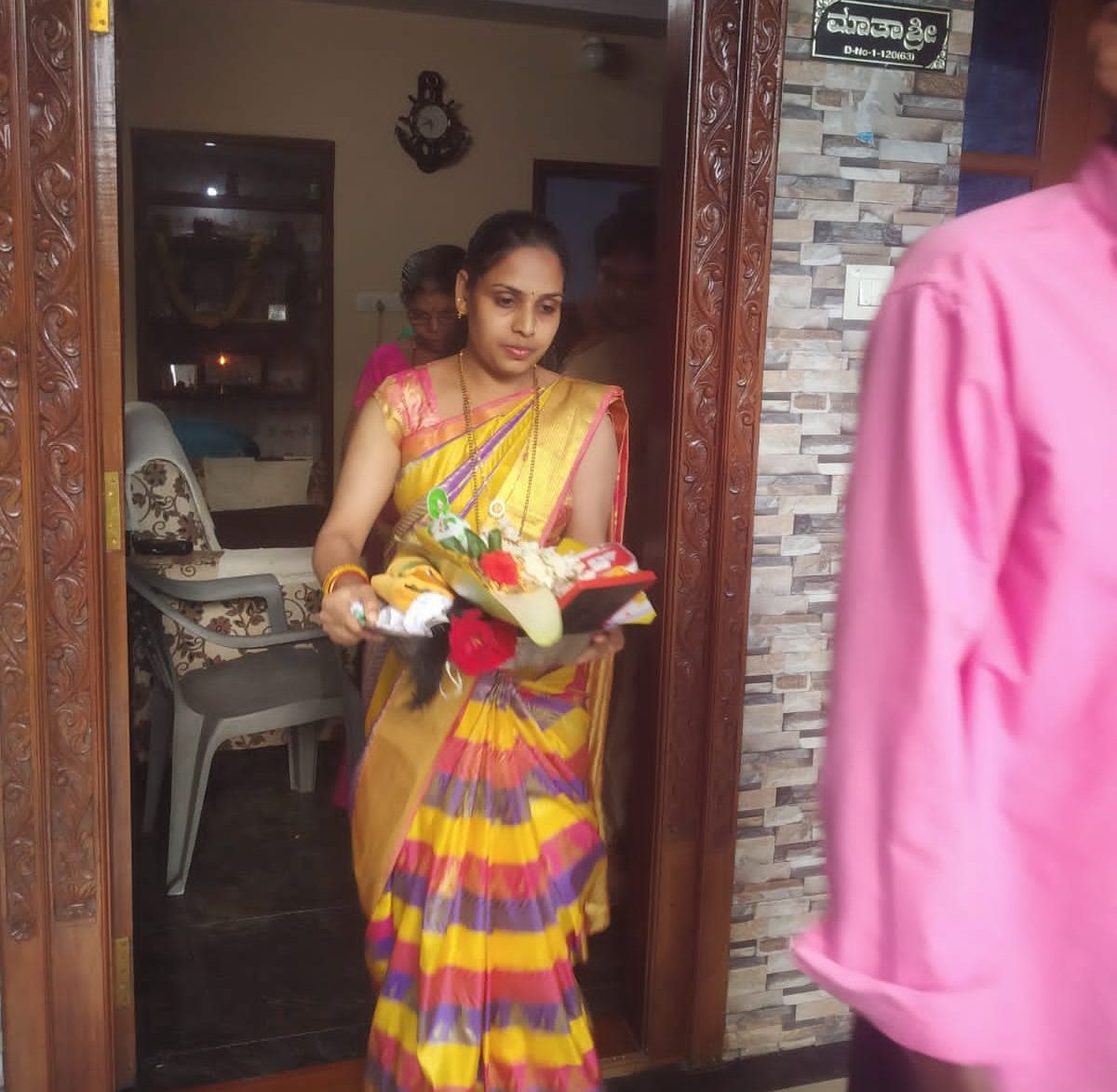 The wedding did not end at rituals. Arun says the best part of the ceremony was the food with fish fry, mangalorean chicken sukka, kadle balyar, mutton gravy with idly on the menu. After the marriage, the families become proper relatives. “From that moment onwards, they invite each other to every family function that happens,” says Arun.

While the tradition was once prevalent, the number of families practicing Pretha Kalyanam has decreased drastically. “There did not used to be good healthcare facilities so there were more premature or infant deaths. This has changed in recent years, and so has Pretha Kalyanam,” explains Arun. “Not many people from my community even know about Pretha Kalyanam. They only got to know after I tweeted about it.”

Jayanthi says skepticism from younger generations who dismiss it as superstition has contributed to its decline. Posthumous marriages are also practiced in France, China, South Sudan and Japan. However, distinct traditional nuances and legal procedures vary across cultures.

For those who still partake in the tradition, it can provide enormous comfort. Seethakka feels as though a huge weight has been lifted off of her shoulders. “Now I can get my other children married without any worry, and they’ll have the blessing of Chandappa and her wife,” said Seethakka. Jayanthi expresses a similar sentiment. “Earlier I used to get bad dreams everyday,” she says. “Now, she can be at peace and so am I.”

Linkedin
RELATED ARTICLES
OTHER ARTICLES
Meg Handler’s photos capture diverse groups of New Yorkers coming together for the collective cause of civil rights.
Photographer Jeffrey Silverthorne always treated his subjects – often those living on the margins of society – with empathy and respect.
The photographer describes taking inspiration from Magnum photographers to craft an intimate and revealing portrait of the city.
How the sounds of nature, air force bases, walking across the country, Windrush and synthesisers have influenced one woman’s journey through music and life.
A campaign seeking to prevent future injustices where there is state involvement is gaining momentum, with Labour recently pledging its support.
This afternoon, workers of the hospitality chain came together to call for better pay and working conditions.