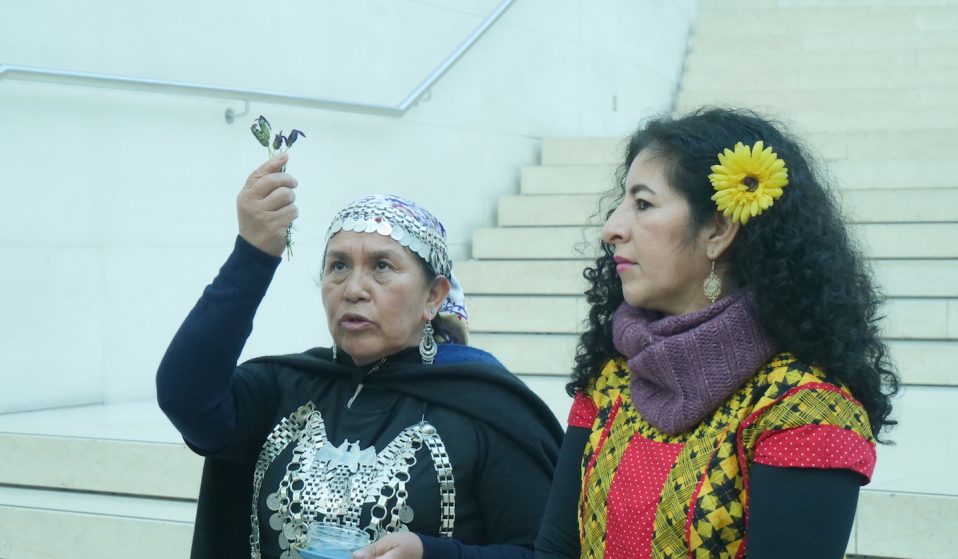 Activists are calling on governments to centre the voices of communities on the frontline of the climate crisis.

Yesterday, activists gathered at the museum for a healing ceremony and to demand that governments centre the voices of communities on the frontline of the climate crisis ahead of COP26.

Room 24 of the British Museum is gloomy compared to the great echoey light of it’s Great Court. Where the latter has a giant bulbous glass roof that floods the cavernous space with natural light, Room 24, which houses objects and exhibits on the subject of living and dying, is windowless and yellow with artificial light. In its centre stands the Moai statue of Hoa Hakananai’a.

Taken in 1868 by a British crew, given to Queen Victoria and then gifted to the British Museum in 1869, the statue’s presence in the exhibit is a source of friction. In 2018, the museum received a request for the return of the statue from the people on Rapu Nui. The British Museum acknowledges in the exhibition that “For many Rapanui, the return of the statue is part of a larger struggle to strengthen their identity after centuries of disease, population loss and colonisation.” It was at the base of this statue that Indigenous leaders from the Minga Indígena COP26 collective began an unauthorised healing ceremony yesterday (25 October) in the museum to acknowledge centuries of injustice. 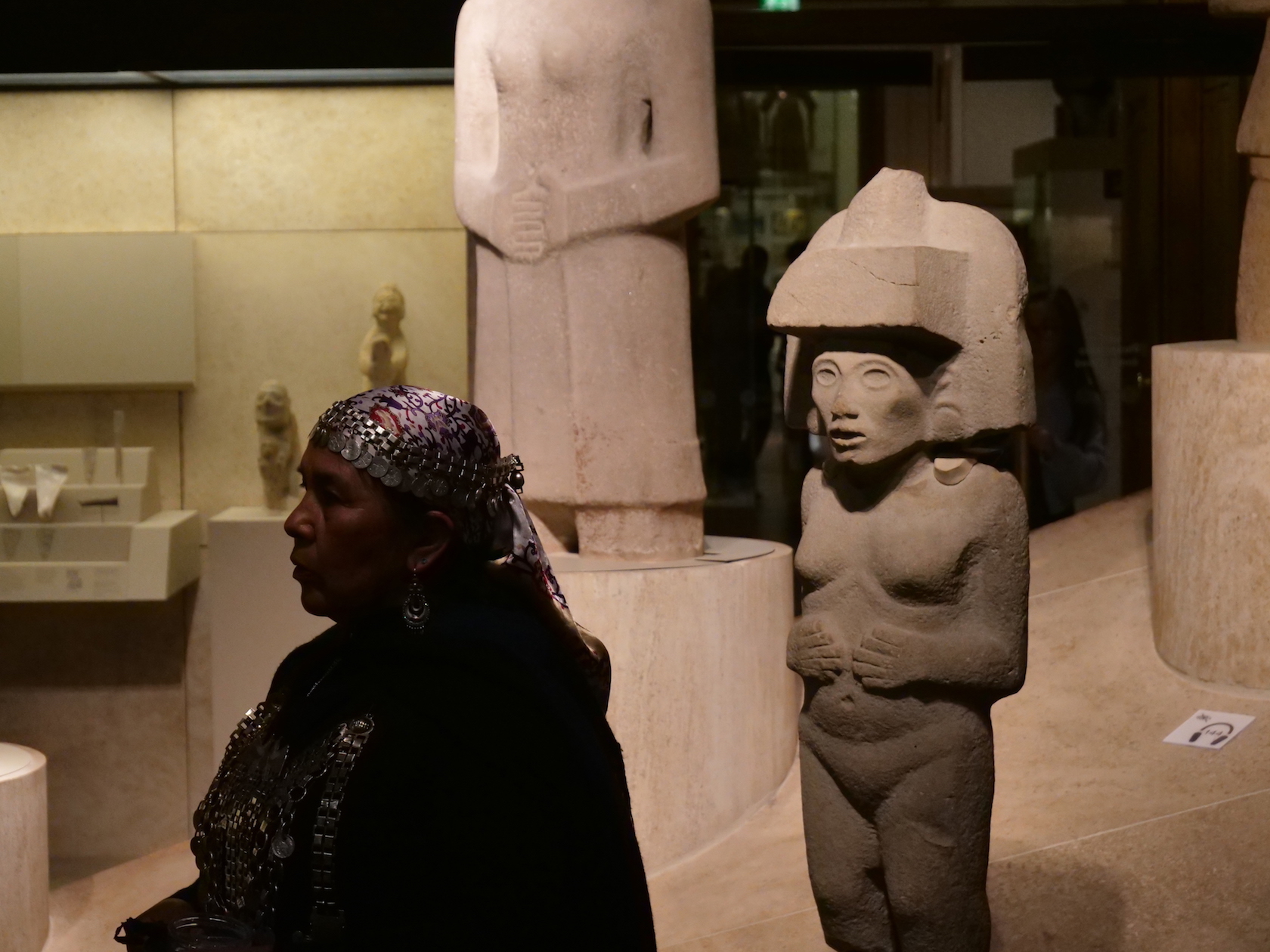 Panchita Calfin, an Indigenous elder from Mapuche nation in Chile, guided people from room to room, pausing in front of stolen artefacts and exhibits to daub them with water before holding a moment of silence and stillness with each. The cumulative effect was to draw attention to just how much of the wealth, both cultural and financial, held within the walls of the museum and the wider city is owed to or stolen from Indigenous communities across the world.

As the ceremony concluded, the leaders congregated on the steps of the Great Court to hold a press conference. Calfin Lafkenche, the lead coordinator of Minga Indigena, said: “We have come to the British Museum because this is where the spirits of our peoples from our territories are imprisoned. We have been asking for years for these objects to be returned. Climate justice is also racial justice. Indigenous people who have been historically marginalised have a right to be a part of these talks. The climate negotiations are not considering the needs of Indigenous peoples.” 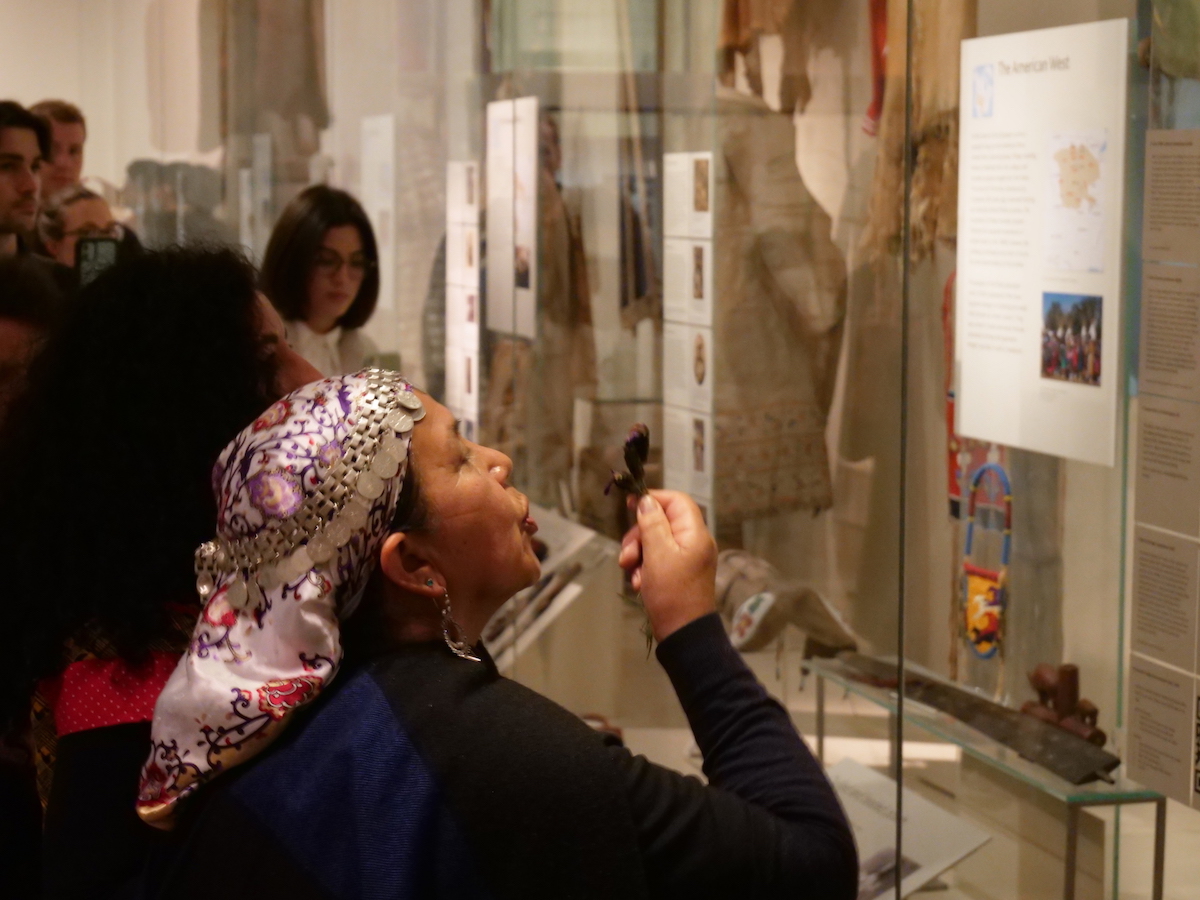 Indigenous people and activists in attendance yesterday launched a unifying demand referred to as ‘Justice Reset’ to centre climate justice as an outcome of COP26. Considerations of justice and fairness have consistently been side-lined in the negotiations – they argue that this needs to change. The debt crisis, Covid-19 and the climate crisis are creating new challenges for Indigenous people and frontline communities. The demand to COP26 will ensure that the principles of climate justice are enshrined in the official outcomes of the summit.

Those present included Farhana Yamin, a climate lawyer and veteran negotiator of the COP process who told Huck: “We have an enormous opportunity at COP26 to recognise the harm that has already been done. These conferences need to change. Richer countries have side-lined poorer countries and shut them out of the process. In the final agreement of COP26, all nations must officially acknowledge that the climate crisis is a crisis of justice. It is the product of an unjust system. The people impacted by this injustice did not cause the climate crisis but are now dealing with the consequences.”

There is growing pressure on the COP summit to centre the voices of those at the sharpest edges of climate change. Just yesterday, Scotland’s First Minister Nicola Sturgeon gave a speech stating: “This COP needs to recognise much more fully the fundamental issues of fairness and justice at the heart of the climate crisis.” There is further pressure for constituent parties to live up to the promises of the past, including the financial commitments set out in Copenhagen in 2009.

Justice Reset is a demand for COP to deliver ambitious language on climate justice, just transition and fairness. It requires an official acknowledgement that people impacted by historic and systemic injustice – such as poorer countries, Indigenous people, small-scale farmers, children and those with disabilities – are being harmed and must be centred in all decision-making.

Lafkenche told the assembled crowd: “We demand that a paragraph is included in the agreement that acknowledges Indigenous people and our land. We need to live in peace with Indigenous peoples. We are not asking for anything new. We want governments to recognise our rights.”

“We are to here to speak about peace and to demand justice,” said Nashieeli Valencia, from Zapoteca Mexico, another activist in attendance yesterday. “It has been our communities, our Indigenous peoples, who have had to pay. We are here to demand that the negotiations at the summit never again exclude Indigenous peoples.”

The members of the Minga Indigena COP26 collective, who arrived at the museum straight from the airport, now head up to Glasgow for the summit where they will put pressure on politicians and negotiators to acknowledge the importance of climate and ecological justice.

COP26 takes place between 31 October – 12 November 2021. Keep an eye out for Huck’s live coverage of COP on our Twitter and Instagram.

Linkedin
RELATED ARTICLES
OTHER ARTICLES
By turning a real-life crisis into daytime television fodder, TV bosses have once again shown themselves to be completely out of touch with audiences.
The two-day long event returned to London this year, showcasing a spectacular parade, steel bands and Caribbean food.
Financial turmoil is pushing people who work in the sex industry into more dangerous and desperate situations as a means of survival.
The workforce is now gearing up for industrial action after receiving a measly pay rise, reports Ella Glover.
Cindy Campbell recounts how her brother ushered in a new era of musical culture at a party she held in the Bronx in ‘70s.
A group of young Palestinians have found temporary freedom in the act of parkour, reimagining wreckage and ruins as a series of high-octane playgrounds.