News & Politics / Inside Britain’s prisons during the deadly heatwave 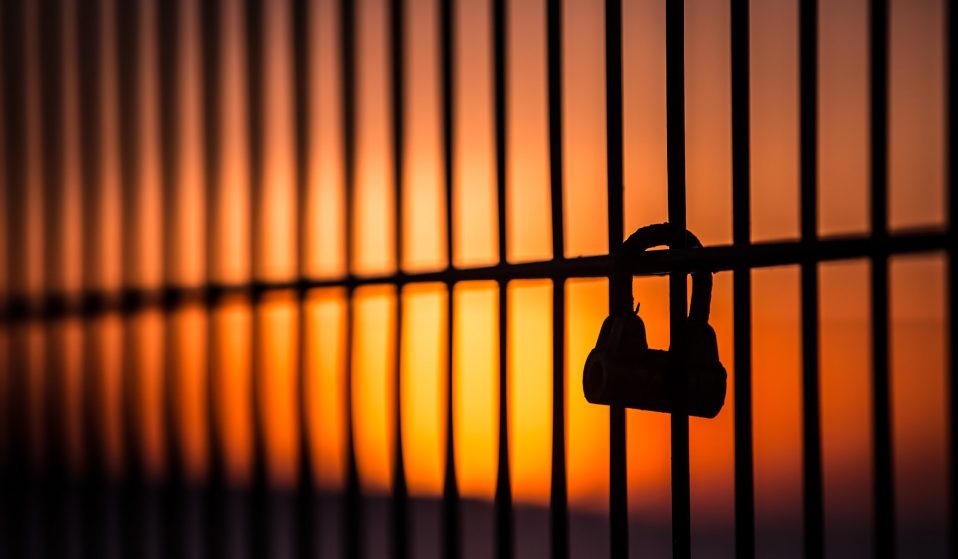 As UK temperatures soared to 40C this week, prisoners were left to suffer in inhumane conditions with a lack of access to water, reports Rebecca Tidy.

As UK temperatures soared to 40C this week, prisoners were left to suffer in inhumane conditions with a lack of access to water, reports Rebecca Tidy.

Last Sunday (17 July), a young man in his 20s went into cardiac arrest in HMP Birmingham at 1 am. According to his 27-year-old girlfriend, Kay, he’d originally had a fairly simple throat infection, but the extreme heat caused his airway to become dry and constricted. This left him unable to breathe and dangerously close to death that night, Intensive Care Unit doctors told her.

“I feel really low from the constant worry,” Kay tells Huck. “We’re not even a quarter of the way through his sentence yet. He’s got two-and-a-half years left in these conditions.”

Kay – a mum-of-two young kids – is one of the hundreds of individuals who lost loved ones locked up in Britain’s overcrowded jails during the ongoing heatwave. Like thousands of others, her partner had been unable to leave his hot cell on a day when outdoor temperatures reached 37C.

When Kay posted about the incident on Facebook, it triggered an outpouring of support, sympathy and similar tales from former prisoners, along with the families and friends of current inmates. With reports of rapidly declining physical and mental health, loved ones fear for prisoners’ wellbeing.

In a WhatsApp group, one inmate in a Devon prison – serving a sentence for cannabis importation – posted: “Everyone’s fed up. We’re dehydrated. Half of us have got headaches from lack of water. I got shouted at earlier for going out on the landing in boxers. The living conditions are unbearable.”

Away from the polished PR images of newly-built prisons, daily living conditions are inhumane. HMP Birmingham was built in Victorian times and like many buildings of that era, it gets unbearably hot in summer and freezing cold in winter. The continued operation of institutions in these rundown, dated buildings is often described as a “scandal” and there are frequent calls for them to be torn down. And yet, they hold a quarter of the country’s prison population.

32 prisons still operating in the UK today were built in the Victorian era. Most don't feature opening windows, adequate ventilation or air conditioning. During 30ºC heatwaves they've been described as feeling like ovens. Can't even imagine what inmates are experiencing right now

A total of 80,819 people across England and Wales spend up to 22 hours a day in cramped six-by-12 foot cells originally designed to hold a single occupant. Perspex windows inadvertently trap heat inside rooms and with curtains banned in many institutions; it’s impossible to keep out sun rays. And, in the sweltering heat, they’re confined to bunk beds positioned less than a metre from a lid-free toilet.

Around 1,250 inmates in HMP Elmley – one of the three prisons on the Isle of Sheppey – were locked up with just one litre of water per person from early morning on 12 July until late the following night. The island, just off the coast of Kent, experienced two burst pipes during 37C heat, leaving residents without running water for much of last week.

“My other half’s sweltering in a south-facing cell, with less than a litre of water to drink, wash and brush his teeth for the last 36 hours,” Sami*, in her mid-20s, tells Huck. “The staff said they’re waiting for emergency supplies. It’s the same thing for his brother in the prison next door, Oakwood.”

The NHS recommends a daily fluid intake of around two litres for men in ordinary weather conditions. However, the health service’s medics suggest increasing this amount to three litres of liquid during the current heatwave.

“My husband is in Oakwood, he’s banged up 22 hours a day – as they’re still on the Covid regime – with the sun shining directly in his cell from morning until night,” Hayley, aged 40, tells Huck. “He asked for water earlier and was told he had to wait 40 minutes. It’s absolutely disgusting: their punishment is being in prison away from their families, not to be tortured in sweatboxes.”

“The toilets won’t flush, so they’re holding on for as long as possible, as the smell will be unbearable,” another woman, whose husband is imprisoned in HMP Oakwood, says.

Though HMPPS has ordered institutions to return to a normal regime, the vast majority of prisoners on the Isle of Sheppey – and in many other parts of the country – are locked up for at least 22 hours a day, families report. The Prison Officers’ Association claims that staff shortages are making it impossible to safely return to pre-Covid scheduling in institutions from HMP Exeter and Winchester to Northumberland.

On the second hottest day of the year, 18 July, a woman named Lorraine tweeted: “My husband just called saying he has a headache due to heat and HMP Lewes has water, but on sensors and you’re only allowed so much an hour. I’m worried sick.”

With a 1.3bil maintenance backlog, there are safety concerns in prisons at the best of times, let alone during some of the hottest temps on record. With many locked up for long periods + poor ventilation, we are concerned about the consequences of this heatwave on those inside. https://t.co/XpvRpjI19W

Approximately 650 men at HMP Lewes in East Sussex live in cells fitted with sensors to ration hourly access to water. Even in cooler weather, they’re often unable to access enough fluid for basic tasks like washing, flushing and drinking. They routinely find themselves waiting until they’re unlocked for their daily recreation hour, so they can quickly strip wash at the sinks on a communal landing.

This austere approach to the provision of an essential for human life – water – is becoming increasingly common in England and Wales. While the strategy reduces the environmental impact of jails, it feels more like yet another cost-saving measure at the expense of the most vulnerable, families say.

It’s more difficult than ever to stave off a dehydration headache at HMP Channings Wood, near Newton Abbot in Devon. On 19 July, the day that UK temperatures reached record highs, the management sent out a written notice informing prisoners that paracetamol and ibuprofen were no longer available from medical staff. Anyone needing pain medication must buy their own – in advance – from the prison store.

“It feels like the government resents giving us even pain relief or water,” says one male inmate at the prison, who is serving a 19-year sentence for drug importation. “Right now, you can buy a fan for £17 from the prison canteen sheet, but most of the lads can’t afford it. If you’re lucky enough to get a job in jail, you get paid £20 a week. And that cash is usually needed for phone calls home and extra food to top-up the tiny portions at mealtimes.”

With tempers fraying in relentlessly hot conditions, it’s unsurprising that relations between prisoners and staff are becoming increasingly tense. A male inmate at HMP Lewes found an empty bucket – left in his cell by a maintenance worker the previous week – and filled it with cold water, so he could soak his feet and cool down. But an officer immediately seized the item, insisting it must be returned to a storage cupboard.

This lack of compassion and humanity extends to the families and friends of incarcerated people, too. The prison sector is notorious for operating disproportionately strict dress codes during visiting times with female visitors banned from wearing sleeveless tops and trousers – or skirts – that fall above the knee. Some institutions even insist on close-toed shoes in the visit hall.

The majority of prison governors have steadfastly refused to relax these rules in the 40C heat, with prisoners in places like Channings Wood still forced to wear a standard uniform of jeans and a prison-issued, long-sleeve shirt to see family members and friends. On social media, people lament the struggle of traveling for up to six hours to attend a family visit in the heat while dressed in clothing best suited to a freezing winter’s day.

There are 12,464 individuals in pre-trial detention and thus not convicted of an offense across England and Wales at present, the Ministry of Justice reports. Huck spoke to one of these people, Raf*, a 50-year-old man beginning his third year on remand in a Category-B prison near Manchester. “The mood’s really low on the wings, especially among lads on remand,” Raf says. “Loads of us have been locked up for two years or more, waiting for a trial. And we’re sleeping on the stone floor to keep cool, instead of working and providing for our families.”

Raf continues: “I keep watching people kicking off at screws, pushing them, punching and shit. Full of resentment and anger, as they struggle to cool down, I suppose. We’ve had four blokes moved into isolation [for violence] this week on our wing alone.”

The current Conservative government has no plans to improve living conditions in jails across England and Wales. Instead, it’s focusing its efforts on creating 18,000 extra prison spaces in a country that already has the highest rates of incarceration in Western Europe.

Struggling families looking for sympathy and help are unlikely to find it with Dominic Raab, the current Secretary of State for Justice, who in September 2021, told the general public: “We’re not ashamed to say that prisons should be tough, unpleasant and uncomfortable places. That’s the point of them.”

Unfortunately, Raab’s populist statement overlooks the inconvenient truth. Many prisoners come from impoverished places that are extremely tough, unpleasant and uncomfortable: it’s years spent living in these precise conditions that have led to this “offending” behaviour in the first place.

But of course, this harsh rhetoric can be boiled down to the age-old debate of whether you want prisons to simply punish individuals who exhibit societally undesirable behaviour – or whether you think our publicly-funded institutions should actually target the deep-seated issues underlying this “offending”.

Right now, people held in British prisons are living in dehumanising conditions – with limited time out of their tiny cells for rehabilitation – while risking their physical and mental health in dangerously hot, overcrowded environments. With extreme weather events set to become a more frequent occurrence as the climate crisis escalates, action must be taken now to protect this vulnerable population.

Linkedin
RELATED ARTICLES
OTHER ARTICLES
In the latest instalment of Photographers in Conversation, the creator talks portraiture, platforms and taking inspiration from Little Simz.
A series of photos by the late Jerry Dantzic taken in 1957 show a tender side to the iconic Jazz musician.
The author discusses her new memoir, which offers a sobering reflection on the racism and otherness she’s experienced along with a joyful celebration of her culinary heritage.
Yesterday, rail workers came together to protest poor pay, working conditions and job cuts in their latest round of strikes.
Students are being left to languish in unsafe housing, in some cases leading to serious health complications.
Last week, Tower Hamlets council removed its nudity-restricting licensing conditions in a huge win for London’s kink community.