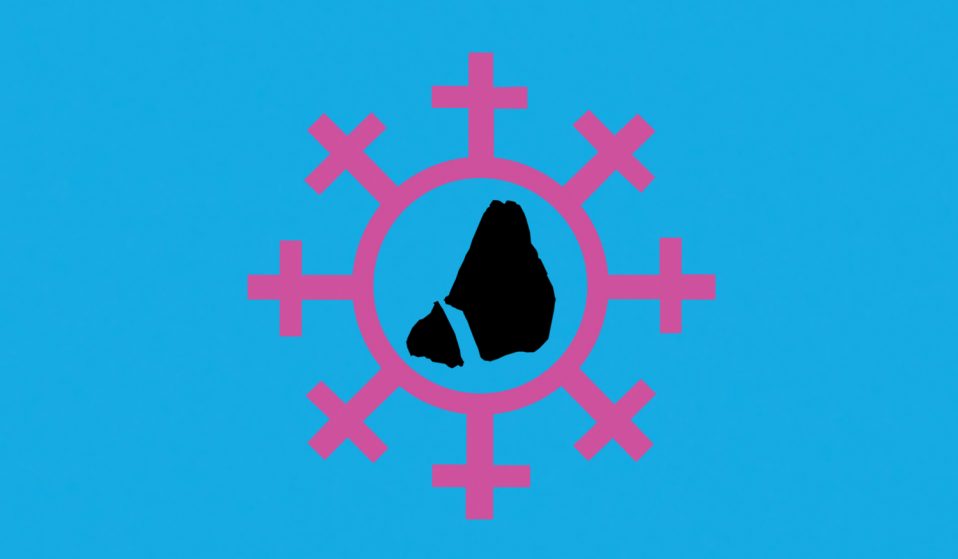 Founded in 2015, Obsidia is the world’s only portable, feminist, self-declared territorial entity. More than just a playful venture, the nation is offering a means to explore alternative modes of political organisation.

On every 4th of July, when millions of Americans gather at barbecues to celebrate their national holiday and proudly display the American flag on every available surface, the citizens of Obsidia – an enclave in Oakland, California – celebrate “Destroy Nationalism Day”. Dressed in their nation’s official colours, electric blue and hot pink, they burn their own flag.

Obsidia is a ‘micronation’ – a self-declared territorial entity that has not been recognised by other states or international organisations. They differ from microstates, like Monaco or Andorra, which are recognised sovereign entities, and are distinct from secessionist movements that actively seek to challenge the sovereignty of nation states. It is believed the first recorded micronation was established in 1925, when Martin Harman declared himself king of the British island of Lundy, off the coast of Devon.

Often admittedly nonsensical or satirical projects, micronations vary in size, from the 620,000 square miles of land that make up Westarctica – founded in 2001 by Travis McHenry when he realised that a huge chunk of Antarctica had not been claimed by any recognised state – to the two small slabs of Obsidian rock roughly the size of a book, from which Obsidia gets its name.

The so-called “world’s only mobile feminist nation”, with an all women and queer government, Obsidia is nestled in an electric blue and hot pink briefcase. The briefcase is usually headquartered in Oakland but can be carried everywhere. “Due to size limitations and fragility, humans can not physically enter the landmass,” Obsidia’s website warns. 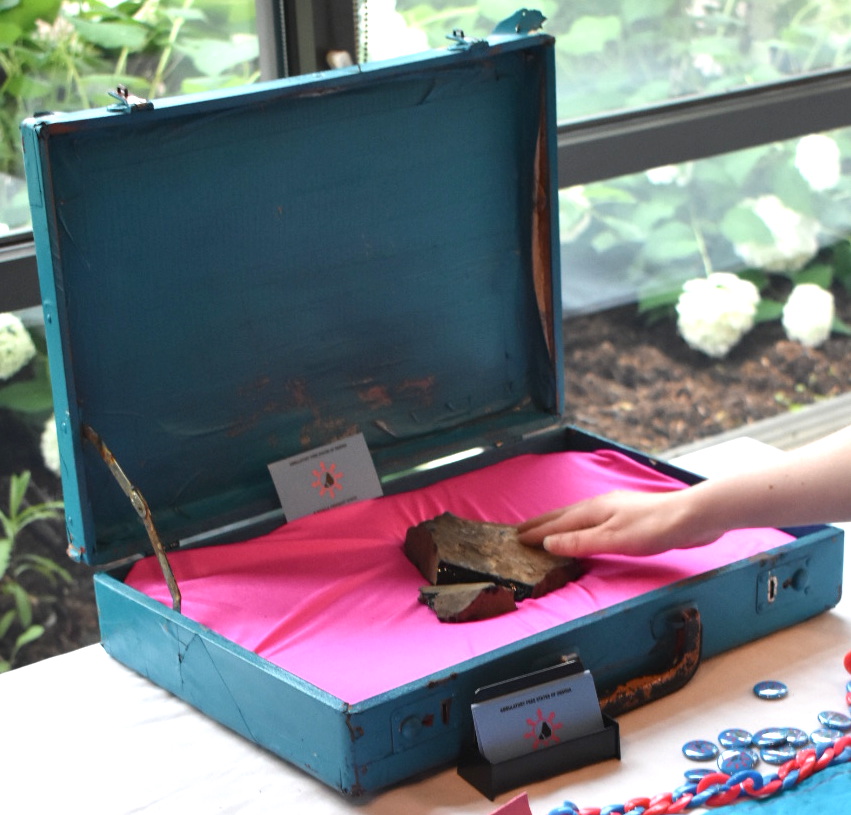 Despite not having a physical territory, Obsidia has many of the traditional attributes of a country: a national anthem (“Our citizens are super hot/ We are an anti-state/ In a briefcase!”), official state animals (snails and swans), national sports (sailing and croquet), and a navy (two sailboats and one dinghy). “One thing we have not come to a consensus on yet is the national currency. As of now we accept bartering, fruit, and American dollars,” says Grand Marshal Karo Yagjian, Obsidia’s founder.

Karo estimates that there are currently around 250 Obsidian citizens, 50 of which have a passport, which is not mandatory for citizenship and works more as a conversation starter than an official document. Aspiring citizens have to face Obsidia’s flag and do the official salute – right arm extended to the side with an open hand, palm facing forward – while reciting the following oath: “Obsidia, I pledge to honour thee. I will uphold the values of Obsidia until I die or become bored.” Citizenship will be granted to anyone, but cis-gendered men cannot serve in government.

The website lists eight government officials, whose titles reflect their interests and skill sets. While a few roles were crafted and allocated by Karo, some officials have come up with their own position. Karo’s sister Christina, who is passionate about environmental issues, is Head of Ecology. Alecia Ott, who has sailing experience, is the Captain of the Obsidian Navy. Other roles are slightly more fanciful, like the very specific remit that the Mistress of Propaganda and Animal Welfare, Georgia Rae, chose for herself.

Citizens are mainly from the US, but Obsidia does have satellite embassies in both Hong-Kong and Germany. While the pandemic prevented Obsidian citizens from getting together in person, Karo is hoping to put together a small event for ‘Swansmas’ – Obsidia’s version of Christmas celebrated on 27th December, which honours the First Lady/Minister of Culture’s love of swans. She’s also planning a winter card mail exchange, a sort of nationwide Secret Santa to connect with fellow citizens.

For Karo, Obsidia is an objectively fun and lighthearted artistic venture, but not a meaningless one. “I don’t believe that artists should be apolitical,” she says. “Too much is at stake and if I am going to devote time and attention to something, it needs to feel meaningful.”

Started in 2015, the micronation stems from an ambition to explore alternative modes of political organisation. As a teenager, Karo discovered Neue Slowenische Kunst (NSK) – a Slovenian political art collective which has claimed to be a sovereign state since 1991, maintaining consulates in other countries and issuing passports and stamps. This idea of a stateless, borderless state that encompasses the whole world fascinated Karo. “This story in particular really woke me up to the temporal nature of state authority and made me want to start my own project, which didn’t happen until years later,” she says.

In 2015, Karo heard about MicroCon – a biennial summit of micronationalist governments created by the Republic of Molossia, a tongue-in-cheek project in Nevada whose founder calls taxes to local government “foreign aid”. The inaugural event was due to take place in Anaheim, California, and Karo knew she didn’t want to attend as a spectator. “This guy I was sleeping with at the time had a big pile of Obsidian. I took a chunk of it and proclaimed independence and history was made,” she recalls.

From the beginning, Karo wanted Obsidia to have a political core, and to be a conduit for her own political journey. “When I founded the nation I was dealing with my own personal awakening to feminism. This arose from a really bad time in my life, being mistreated and witnessing those close to me suffer from domestic and sexual violence,” she says. For Karo, the playfulness at the heart of the project is a political act in itself, a way for women and LGBTQ+ people to find community in the alienating and disempowering environment that capitalism creates. “For Obsidians, the oppression of women and capitalism are inextricable. We believe creativity is the most important tool for resistance against and survival under capitalism,” she explains.

Both Karo and Alecia are involved in political activism outside of, or rather parallel to, Obsidia. Alecia sails with Women on Waves, an organisation which provides contraceptives, sex education, and safe abortion services outside territorial waters for women in countries where abortion is illegal. Karo works for a refugee association called Ladder Outreach and Rescue Alliance and fundraises for organisations in Armenia, where communities are still recovering from the 2020 Nagorno-Karabakh war. “This work can be really heavy, so at least with Obsidia we have a fun organisation that’s tangentially related in its mission,” Karo says. 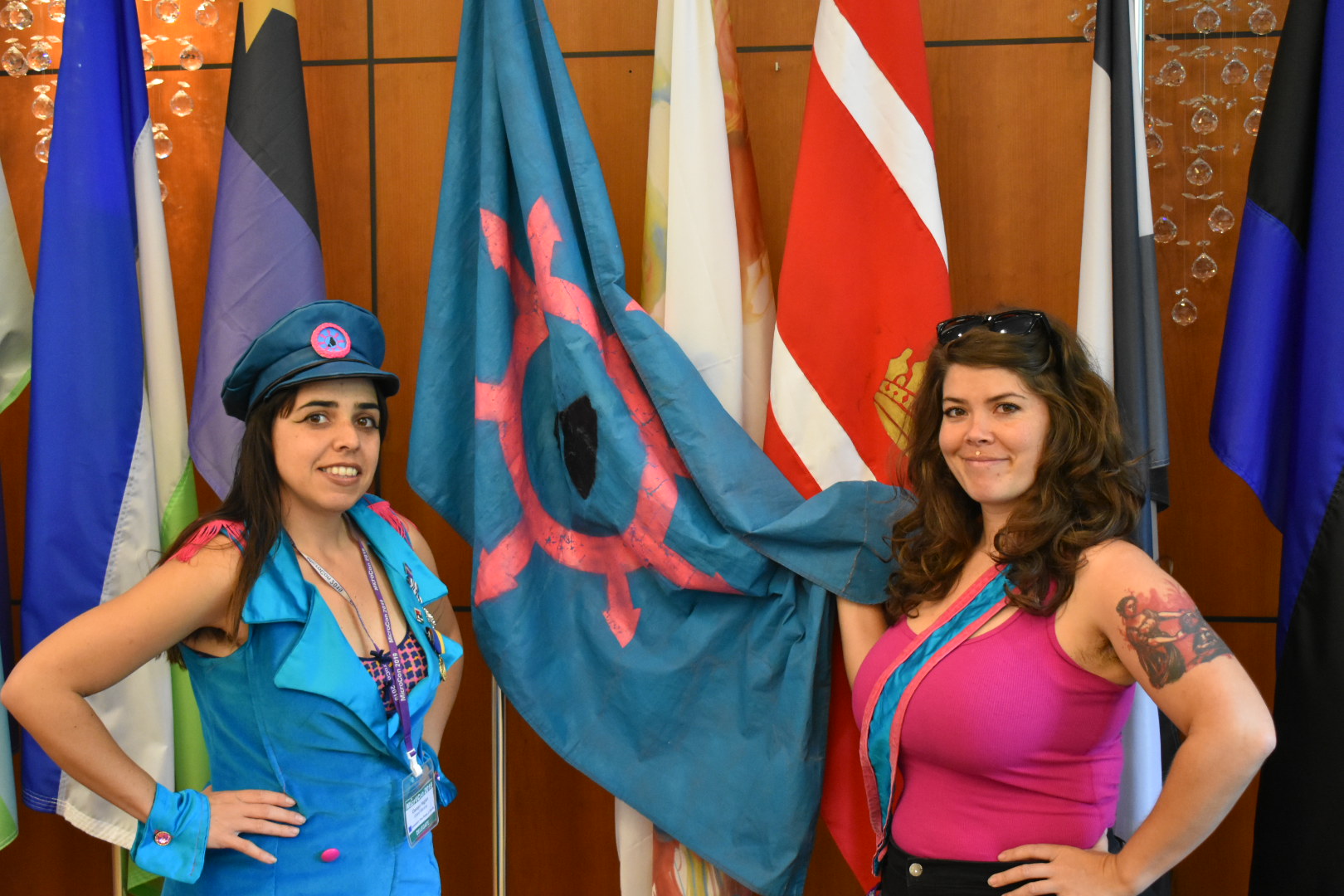 According to Philip Hayward, adjunct research professor at the University of Technology Sydney and micronations expert, Obsidia belongs to the strand of micronations that have a political vision. Other examples include Atlantium, a non-territorial global state and social movement which aims to show the arbitrary nature of borders; Liberland, a libertarian micronation established on a disputed plot of land on the western bank of the Danube between Croatia and Serbia; and The Gay and Lesbian Kingdom of the Coral Sea Islands, a group of uninhabited islets off the coast of Australia that were declared independent in 2004 by gay rights activists as part of a political campaign to legalise gay marriage in Australia.

The three other strands of micronations, according to Hayward, are: vanity projects often started by men who wish to fulfil dreams of uncontested leadership; independent republics declared for the sole purpose of circumventing regulation, such as the inability to obtain planning permission; and short-lived internet-based projects where people claim random areas they have no connection to.

According to Hayward, political micronations are in the minority, for the simple reason that their niche appeal means their political clout remains limited. But for Kundai Chirindo, an associate professor of Rhetoric and Media Studies at Lewis and Clark College in Portland who researches post-colonial micronations, political micronations are fascinating projects that reflect a genuine discontent with current political entities. “Helplessness is the driving force [behind political micronations],” he explains. “When a particular political arrangement doesn’t serve the interests of the community, people are resourceful, people adapt. They will contort and conform themselves otherwise, out of the anxieties driven by the dissatisfaction towards the existing political arena.”

For Chirindo, the rise of different ways of imagining political collectives is a welcome development. “People forget that the idea of the nation state as you and I know it today is actually a fairly recent development in the broader history of our species,” he says. “Coming out of the Treaty of Westphalia [the 1648 peace treaty which brought the Thirty Years’ War to an end and defined the principles of national sovereignty] were these borders and boundaries that were superficially imposed, and separated people, cultures, and communities. The micronation […] is a protest against this superficiality.”

This rejection of the very concept of the nation-state is also at the heart of Obsidia’s political stance, reflected in its lack of territory and borders. “Having rocks be our actual ‘nation’ is both nonsensical and really thought-provoking, in my opinion,” Alecia says. “It’s portable, allowing it to travel anywhere, and can be seen as a manifestation of our belief that borders are imaginary and only serve to uphold capitalistic and militaristic aims.” The burning of the flag on Destroy Nationalism Day, which Karo says is the most important Obsidian holiday, symbolises Obsidian citizens’ commitment to reevaluating their relationship to nationalist ideology.

Karo believes that by creating a community where people can imagine and talk about different ways of coming together, Obsidia can be a force for change. “I can say that through this project, I have most definitely prioritised my relationships with the women and queer people in my life and strengthened my own resolve,” she says.

“There’s a popular anarchist saying that ‘Another world is possible’ and I think Obsidia really takes that to heart,” Alecia adds. “Obviously we aren’t taking over the world, but creating community, putting out new ideas, pushing for alternatives to the status quo, I think that is what we’re about.”

Micronations are fundamentally whimsical and unreplicable on a larger scale; they emerge from the imagination of creative individuals and the political power they wield will always be limited. But they shouldn’t be dismissed as silly or inconsequential projects. They can be spaces for effective community building and foster genuine conversations about alternatives modes of political organisation.

“We live in a male-dominated world and the assumption that progress for women and LGBTQ+ people is a linear path that will naturally unfold is not necessarily a given,” Karo says. “People still need to see this modeled, and satire is a really powerful artform.”

Linkedin
RELATED ARTICLES
OTHER ARTICLES
By turning a real-life crisis into daytime television fodder, TV bosses have once again shown themselves to be completely out of touch with audiences.
Cindy Campbell recounts how her brother ushered in a new era of musical culture at a party she held in the Bronx in ‘70s.
Rogue landlords are exploiting young and inexperienced renters and leaving them in mental and financial turmoil, reports Niall Hignett.
The idea that a younger generation is abandoning work has become a popular narrative online, but it doesn’t necessarily reflect reality.
With skyrocketing rents, packed out viewings, bidding wars and more, renting in London has never been harder.
Financial turmoil is pushing people who work in the sex industry into more dangerous and desperate situations as a means of survival.