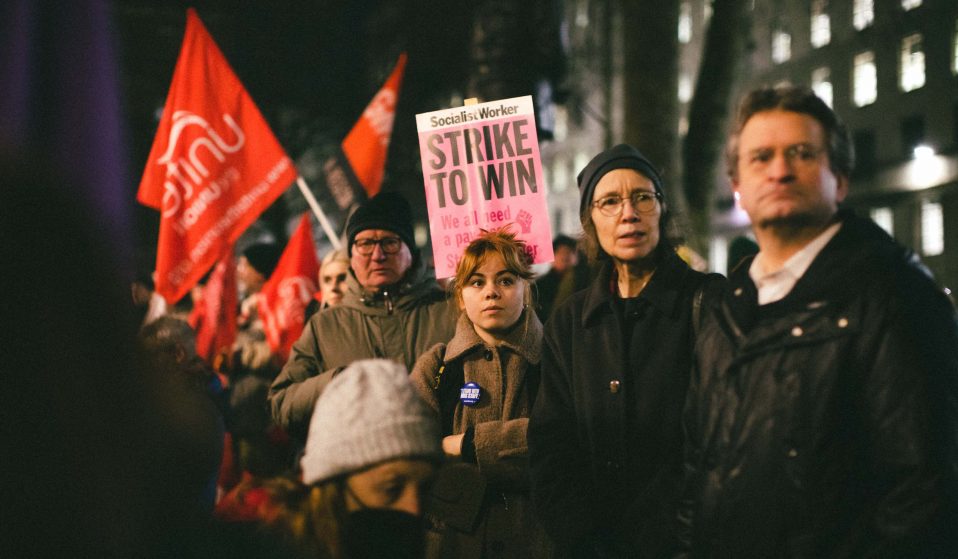 Activists and campaigners are fighting back against new laws that would seriously undermine the ability to take industrial action, calling it an attack on fundamental workers' rights.

Activists and campaigners are fighting back against new laws that would seriously undermine the ability to take industrial action, calling it an attack on fundamental workers' rights.

It’s cold on Whitehall. Blistering wind whips through the thousands gathered opposite No.10 Downing St., banners and placards thrust high into the dark evening sky. A chorus of “Fuck the Tories!” ripples through the crowd as they shuffle from side to side afront of a stage under a gazebo. A roar goes up as the first speaker of the night, University and College Union General Secretary Jo Grady, takes to the stage.

Just days before, the union announced a historic 18 days of strike action through February and March. Speaking just before she went on stage, Grady told Huck she was “very confident” of winning the nationwide dispute over pay and conditions.

“Nobody wants to commit to losing that much pay,” she explained, “but this is a once in a lifetime dispute for us […] particularly in this moment in the UK, we’ve got employers back to the table like we’ve never had before in a dispute, so we may not have to take those 18 days but we are primed and we are ready and employers need to know that they can’t keep using staff as their shock absorbers.” 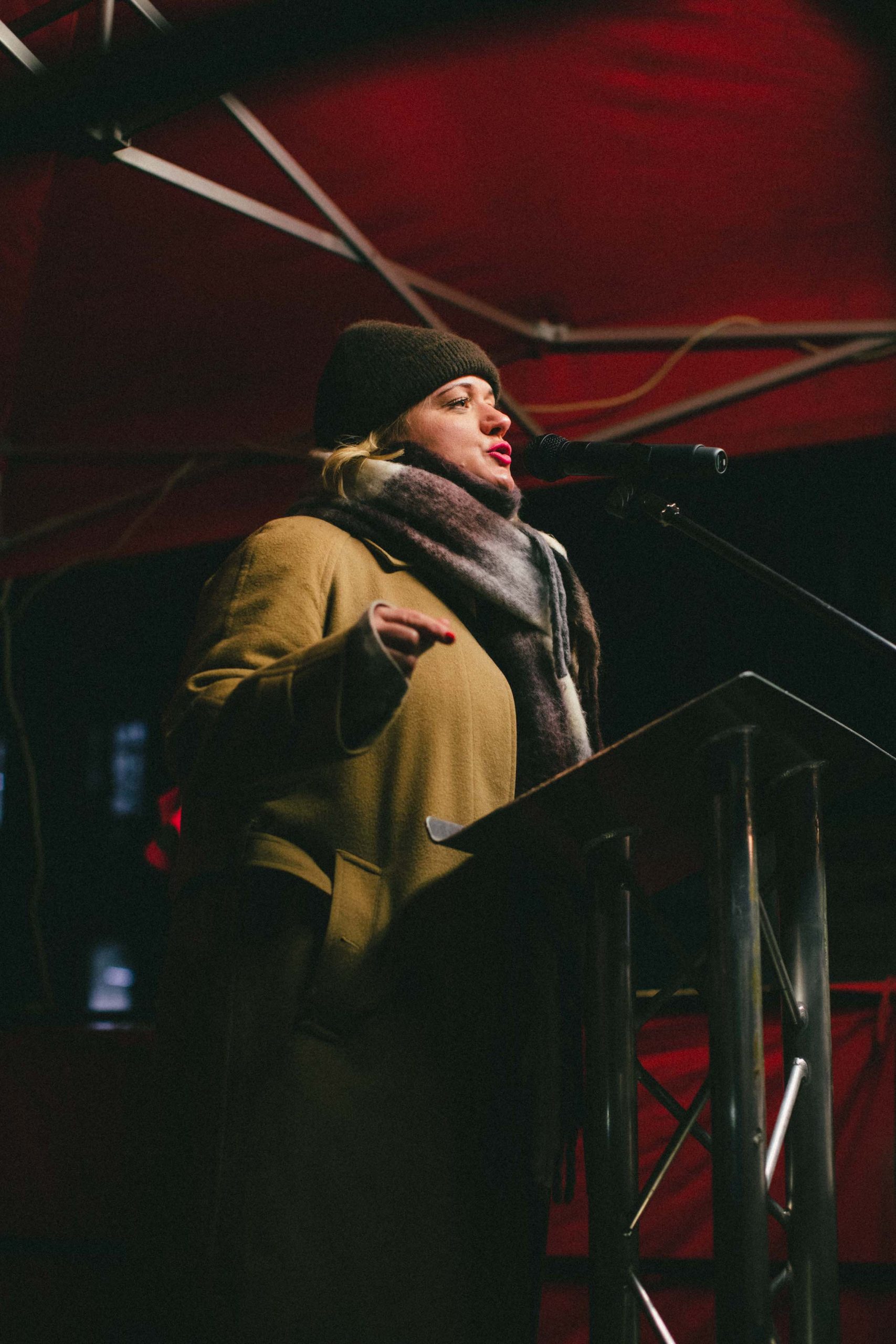 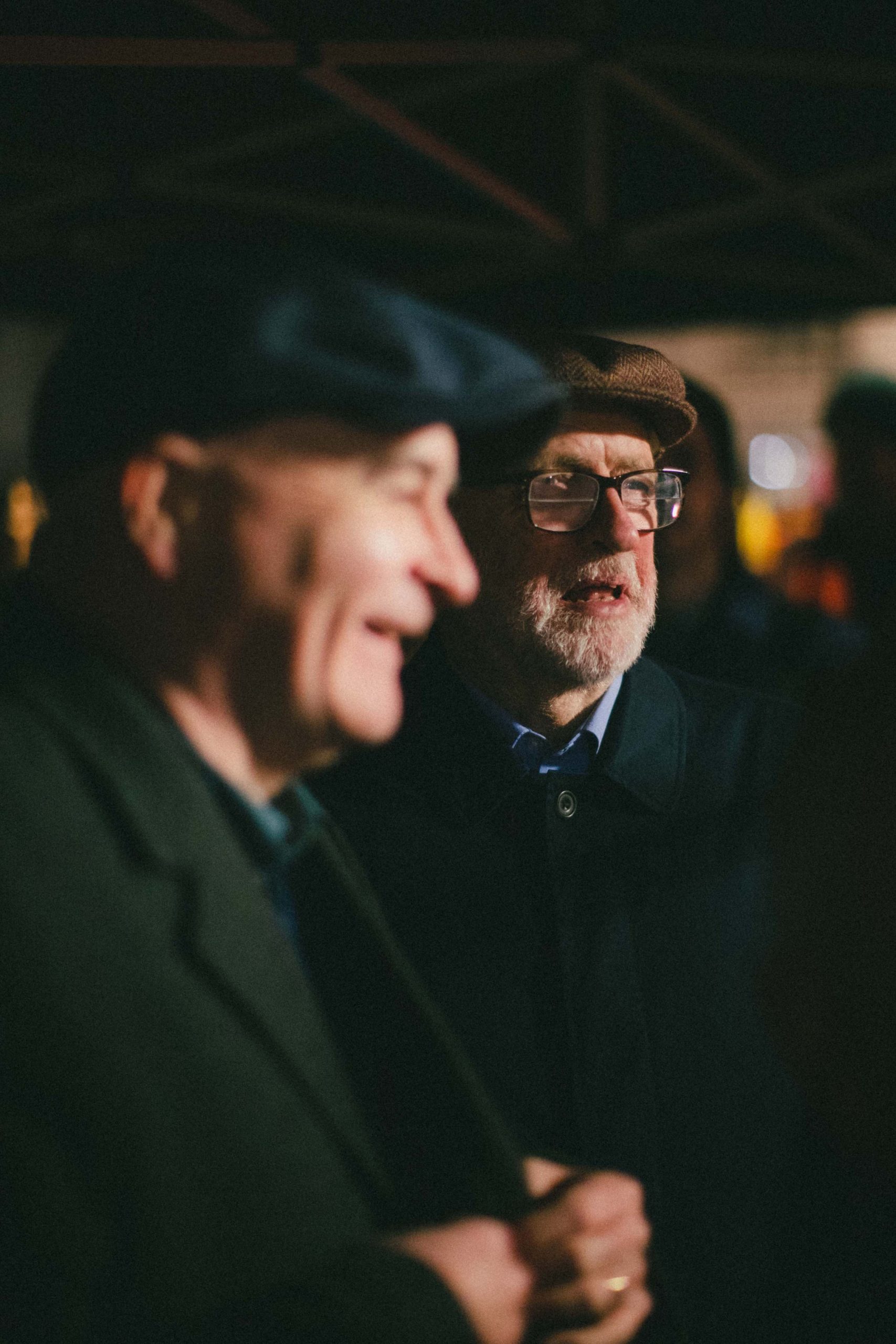 The particular moment Grady refers to is the wave upon wave of historic strike action across the public and private sectors. Starting off last summer with the beginning of The National Union of Rail, Maritime and Transport Workers (RMT) strike and rolling through autumn and winter, union after union have balloted for – and won – the right to take action, with just this week the National Education Union (NEU) announcing the result of their historic ballot of teachers across the country and their intention to strike at 23,400 schools.

This week has also seen historic action from nurses, as well as announcements of strike action across sectors on 1st February by staff in schools, universities, the rail network and civil servants.

There is no doubt that momentum is building. Over a decade of pay freezes, cuts and squeezes, combined with an intensifying cost of living crisis and historic inflation, have seen an unprecedented drop in the value of work across many sectors and standards of living across the country. 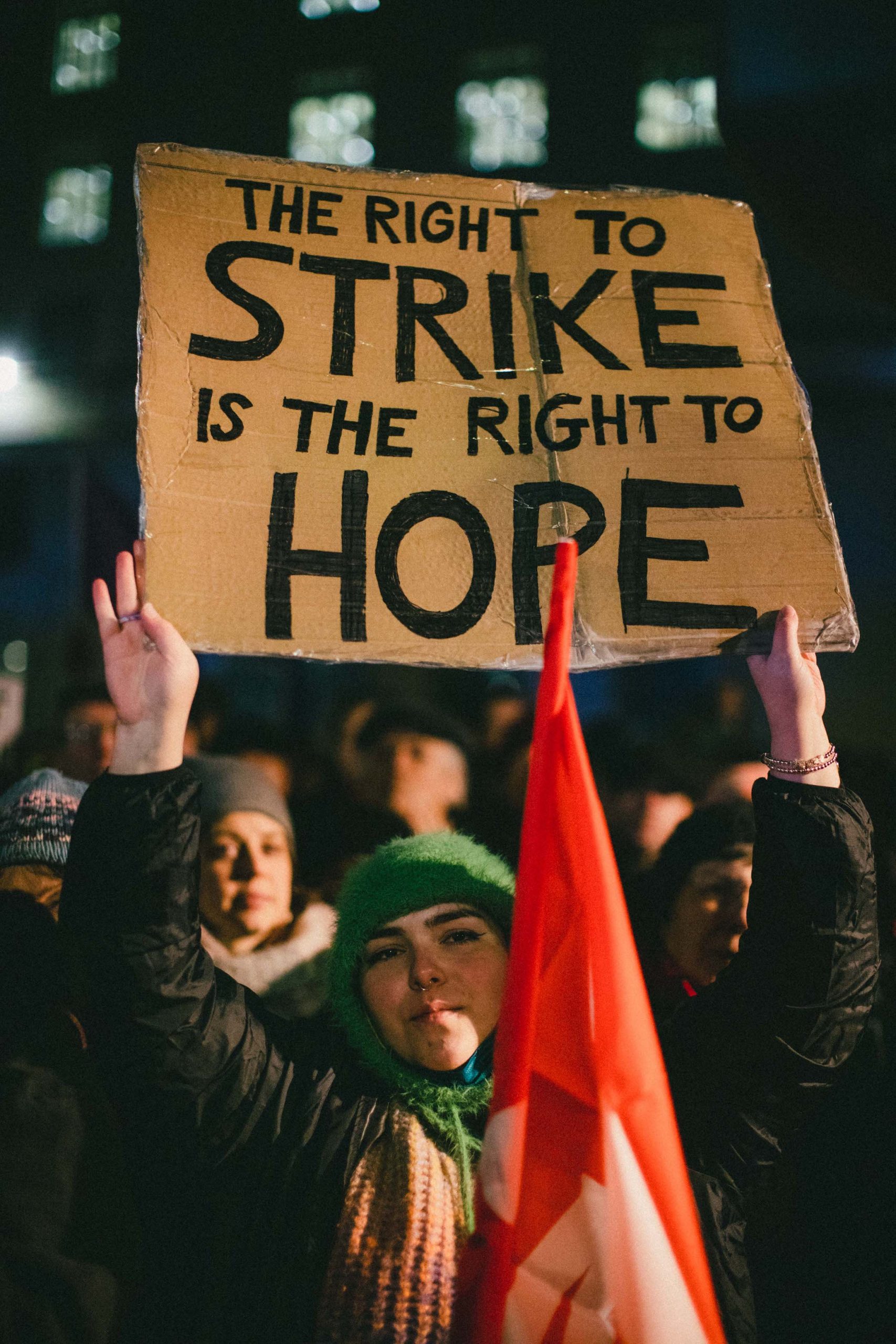 The government has reacted, unions say, by actively blocking deals, despite this week admitting it would have been cheaper to settle the rail dispute than to allow it to continue. In reaction to strikes across rail and health sectors, the government has this week introduced new legislation to Parliament which they say would seek to ensure a minimum level of service. However, as unions and campaigners point out, it is merely another attempt to subjugate the right to strike in this country, following a series of legislative restrictions enacted over the last decade by successive Tory governments.

It’s this latest attack on unions that brought thousands to the streets on Monday evening as the bill was presented to Parliament, including Olivia Blake, Labour MP for Sheffield Hallam.

“I’ve come today to show my solidarity with all working people because this attack on workers is completely unacceptable,” Blake told Huck. “We’re seeing a government who is unwilling to take responsibility for their own failings and wants to pit us against each other. I think we should be absolutely against this legislation that they’re forcing through this evening.” 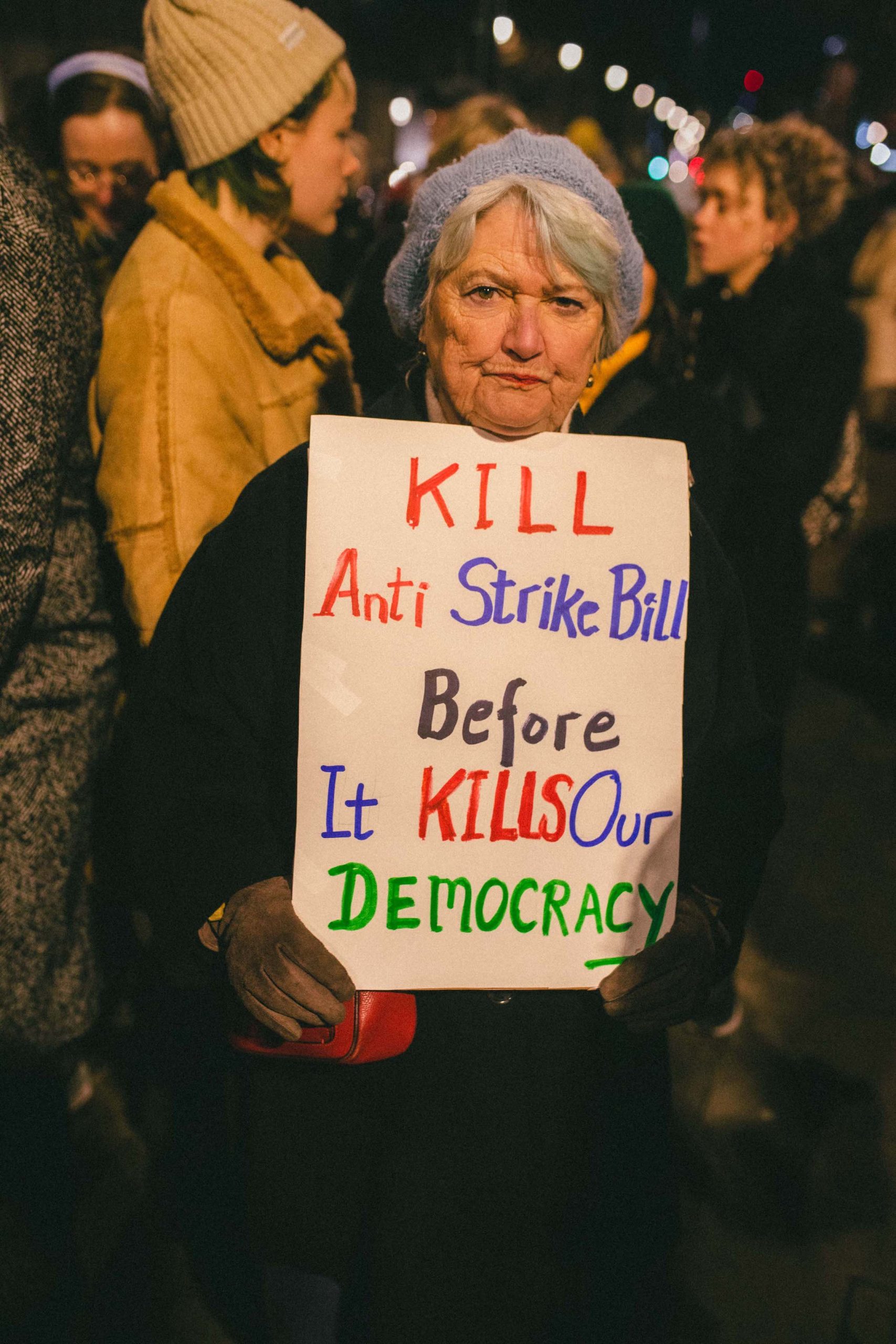 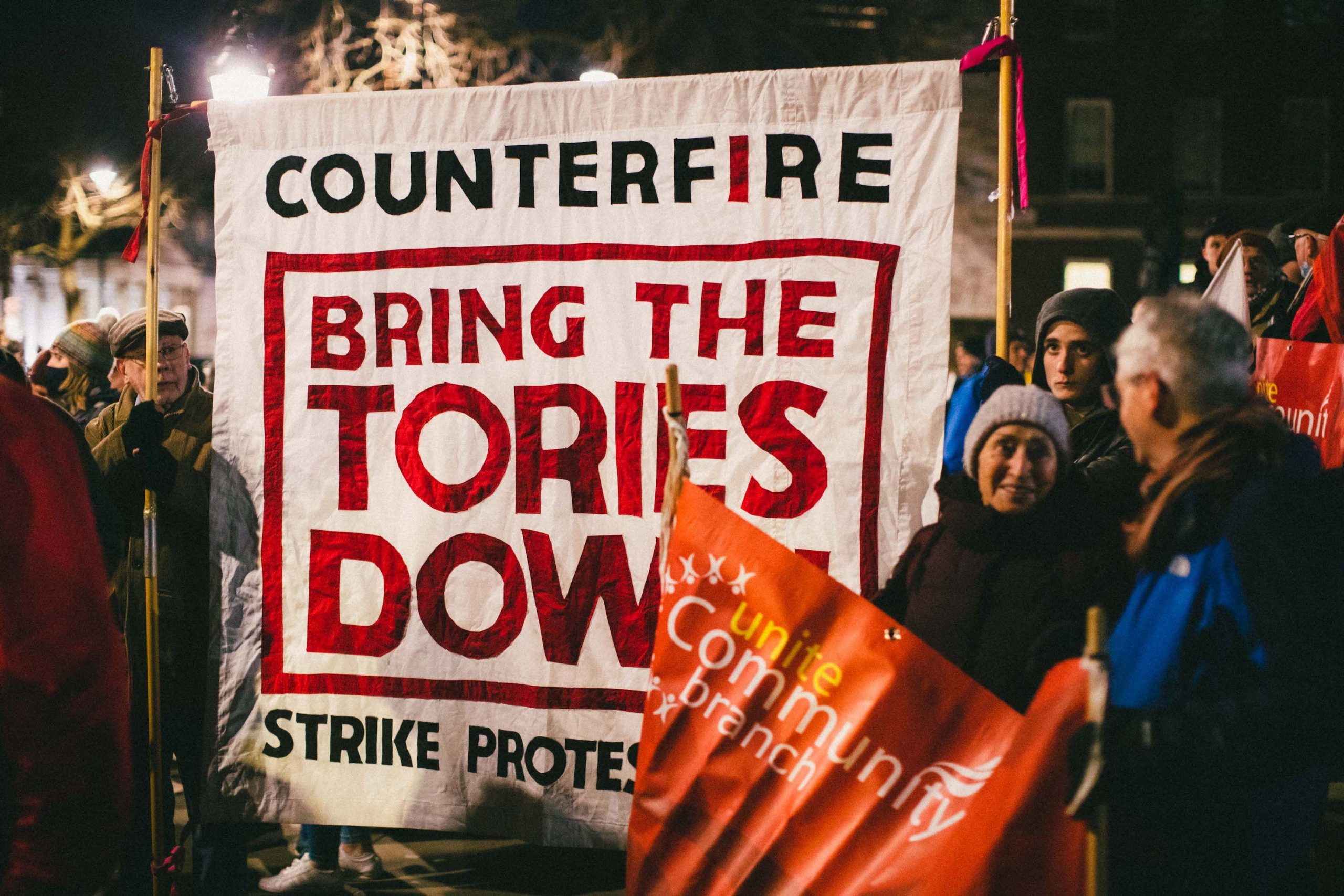 Grady was resolute in her opposition to the bill, telling Huck: “We’re here to send a clear message to this government as they start debating this bill that if they think this is threatening, or they think this is going to make us feel hopeless, it is doing the exact opposite.”

On stage at the demonstration Paul Novak, General Secretary of TUC addressed the crowd, condemning the latest attack on unions. In a press release, Novak said: “Make no mistake – this bill is a fundamental attack on the right to strike that will force workers across the public sector to cross picket lines or face the sack and it will do nothing to solve the current disputes across the economy – but only make matters worse.

“The government is deliberately railroading through this spiteful legislation to avoid proper parliamentary scrutiny.” He added, “It’s shameful that MPs are being asked to vote blind on a bill that will have far-reaching consequences for millions of workers.”

In a rare move ahead of votes on the bill on Monday (23 January), the Regulatory Policy Committee – a group of independent experts brought together by the Department for Business, Energy and Industrial Strategy  issued a statement criticising the Government for failing to submit the bill for impact assessments and proper scrutiny. 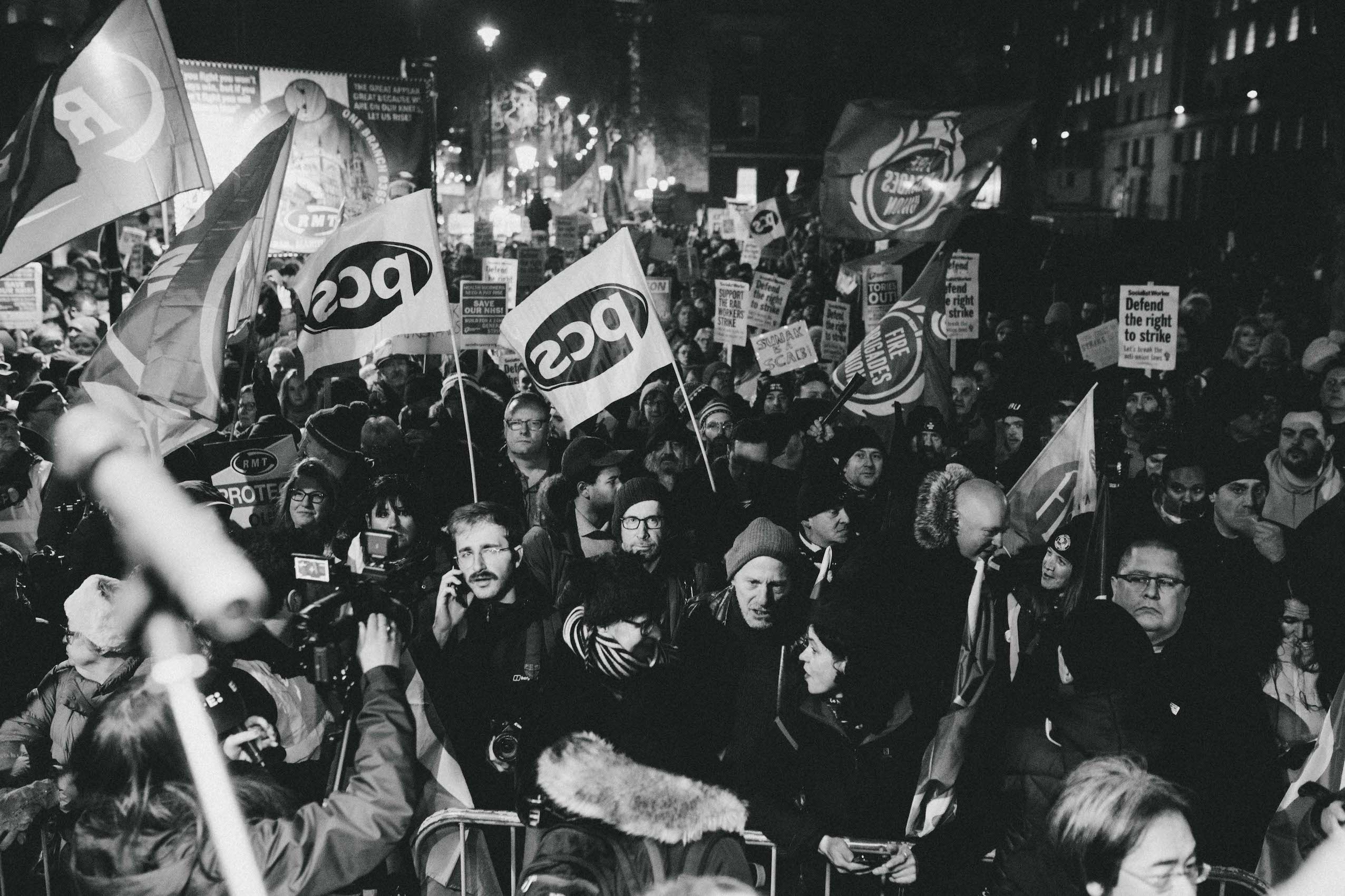 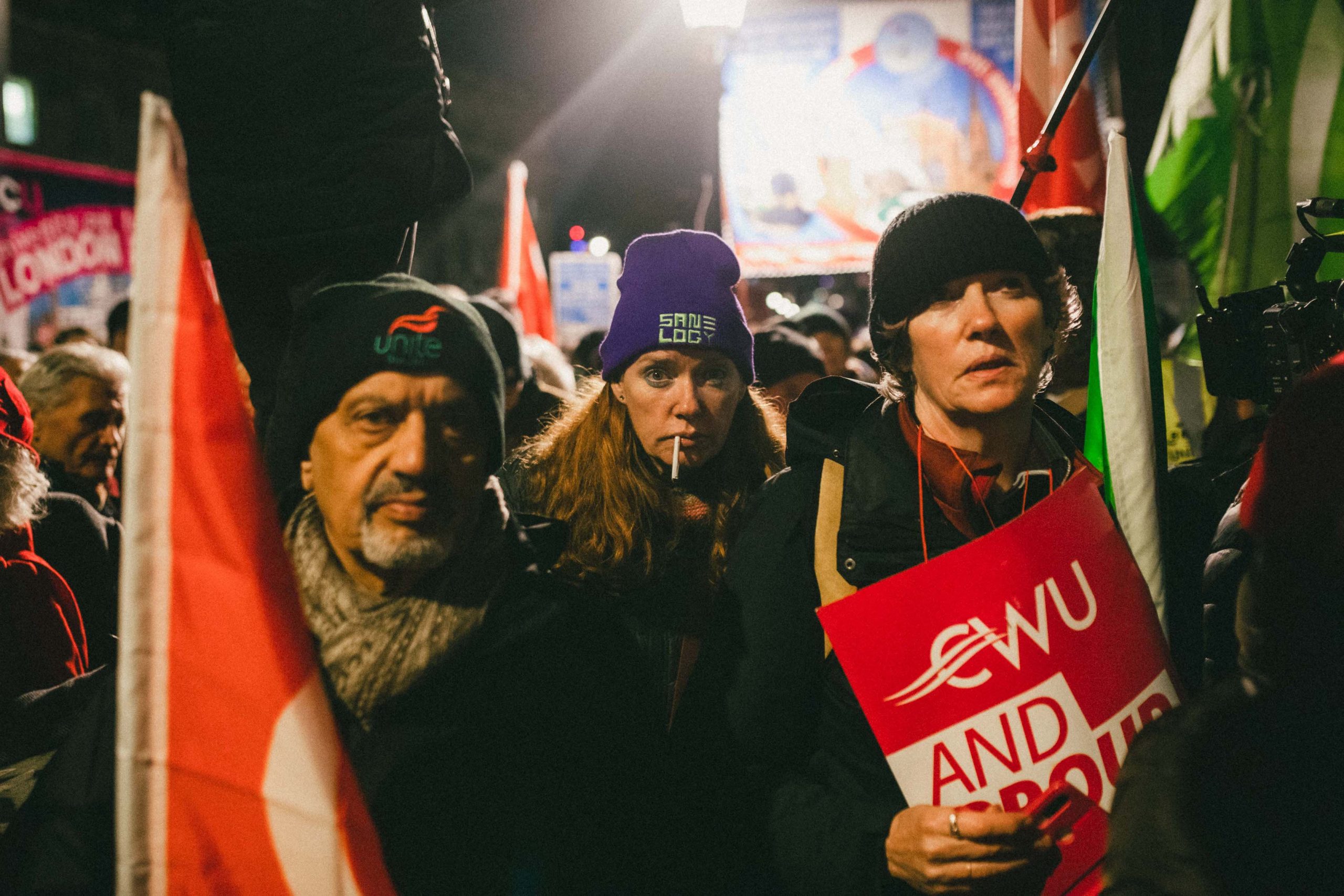 Also speaking at the demo on Monday night was Zarah Sultana MP. Speaking to Huck the day after the bill passed its second reading in Parliament, the Labour MP for Coventry South told Huck, “This anti-worker bill is an attack on the whole working class. The Tories don’t actually care about minimum services – if they did, they would have given workers a fair pay rise. Instead this bill is about undermining the collective power of workers, making it easier for bosses to exploit them and for the government to ignore them.”

She added: “The Tories may have won the vote in Parliament last night, but we can defeat this bill by building our movement on picket lines, workplaces and across our communities, forcing the government to back-down.”

This period of industrial action has seen an intensification of attempts to vilify workers by the government and sections of the media. Stories about those unable to reach hospital appointments because of rail strikes or people left without access to healthcare during ambulance strikes have become commonplace. There are those in the media who have consistently pushed the line that working class people are bearing the brunt of the strikes, forgetting that those are more often than not the very people on strike. 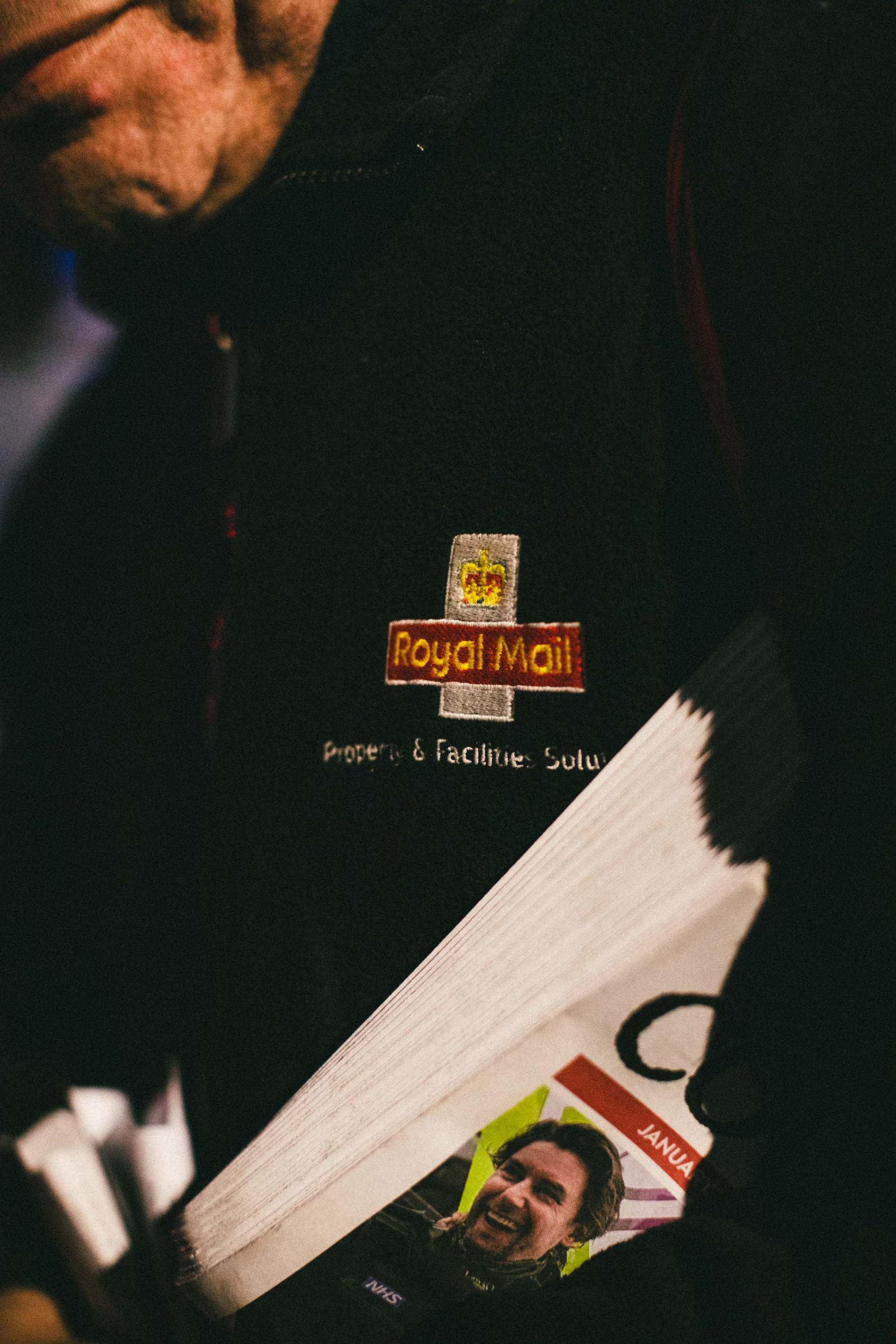 For Grady, far from intensifying anti-union feeling, the current wave of action has only solidified public opinion in favour of them. “When the Tories try saying ‘If anyone dies on an ambulance strike day it’s the workers fault’ or it’s the nurses fault, that just doesn’t wash, because we all know somebody or we all know horrific stories where someone has waited 24 hours in an ambulance or died waiting for the ambulance.”

Blake agrees that the anti-worker rhetoric just hasn’t been washing. “We’ve seen years on years of freezes on public sector pay which has had a long term impact. I think it shows there’s a big shift in public opinion about what people should be worth and earning and how much of our wealth is being stripped out of our communities and [a realisation that] actually people deserve a good and proper pay rise.”

The polling suggests she’s right. Opinion poll data from last week shows a majority of voters (57%) supporting nurses and ambulances right to strike. A poll this week showed that 51% of the public back teacher’s right to strike. Though support for the rail strikes, which enter their 8th month in February, has slipped, with 38% of the public backing the action and 46% opposing. 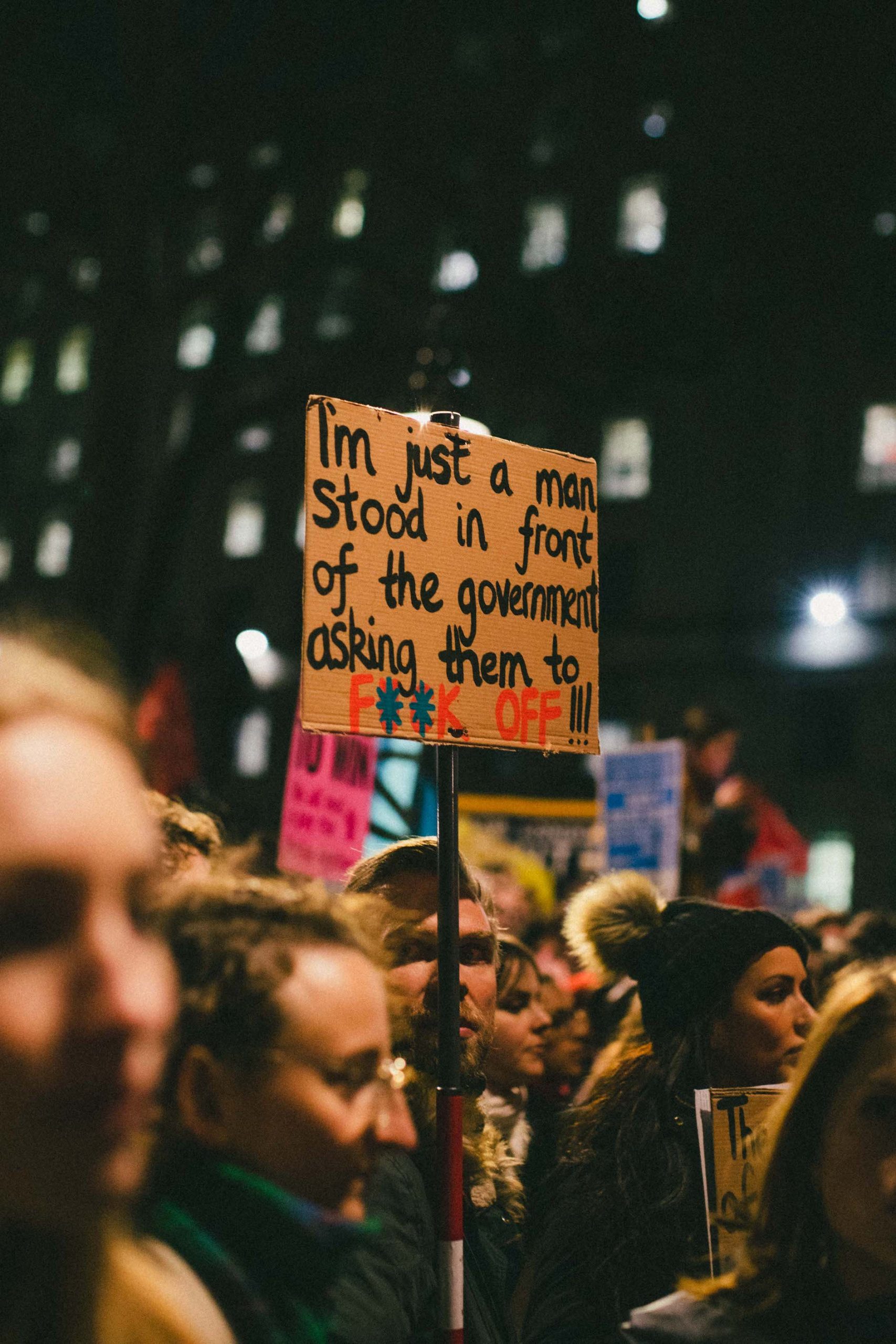 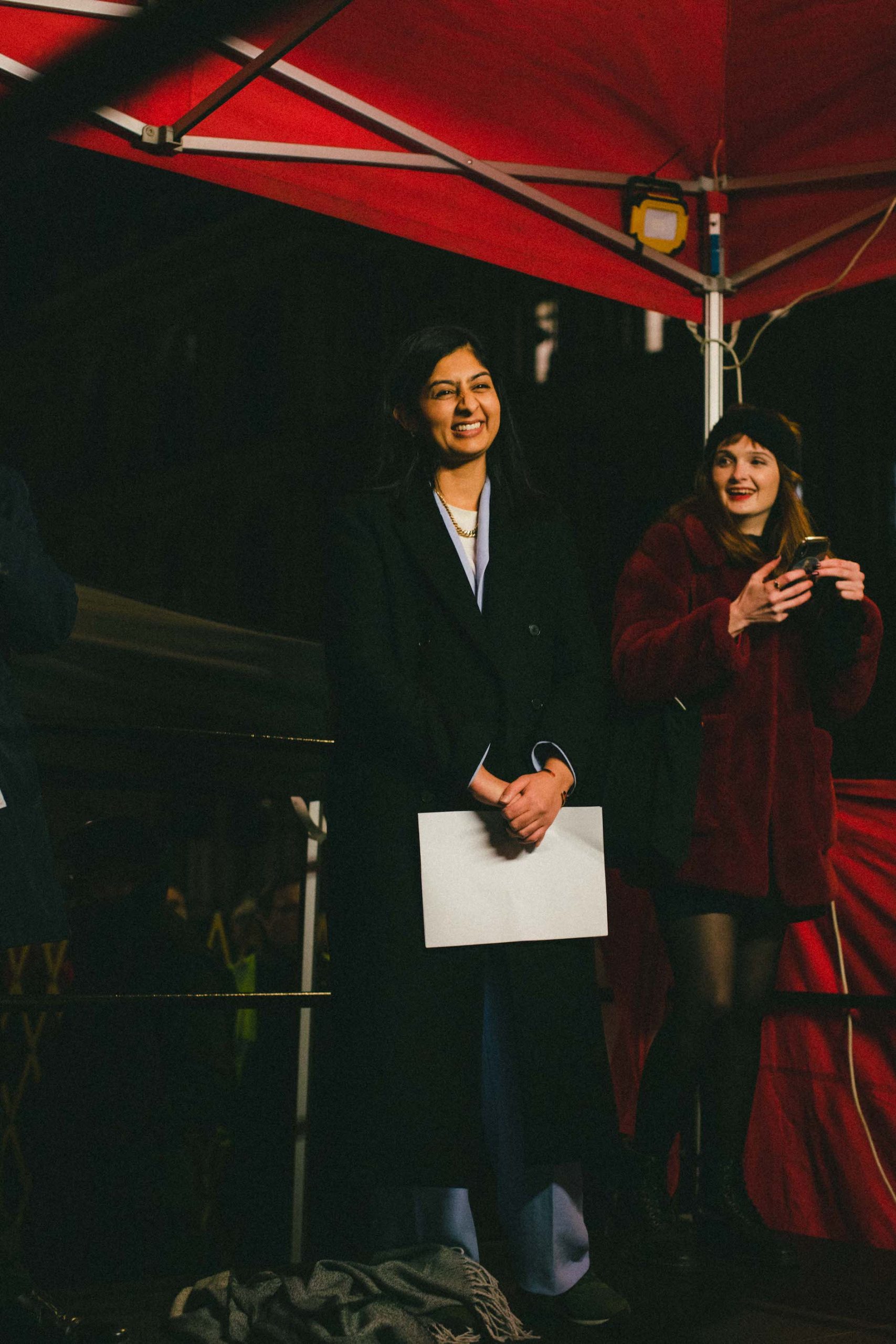 The fight against the bill and for fair pay and conditions for workers across the country certainly shows no sign of slowing down. Rallies are planned up and down the country, with a major rally featuring union leaders planned in ex-Labour leader Jeremy Corbyn MP’s constituency of Islington North on 30 January, just days before the historic 1 February day of action. Corbyn’s Peace and Justice project has launched a tool allowing people to email their MP asking them to resist the latest round of anti-strike legislation.

Speaking to Huck, Corbyn said, “The government’s attack on trade unions is an attack on all of us; the teachers, rail workers, health workers, civil servants, postal workers and the millions facing poverty who have been deprived of decent housing, employment and healthcare.

“The support for the labour movement and resistance to this appalling attack on our hard-fought rights is growing,” he added before concluding, “We’re fighting for our futures and the next generation – and we will win.” 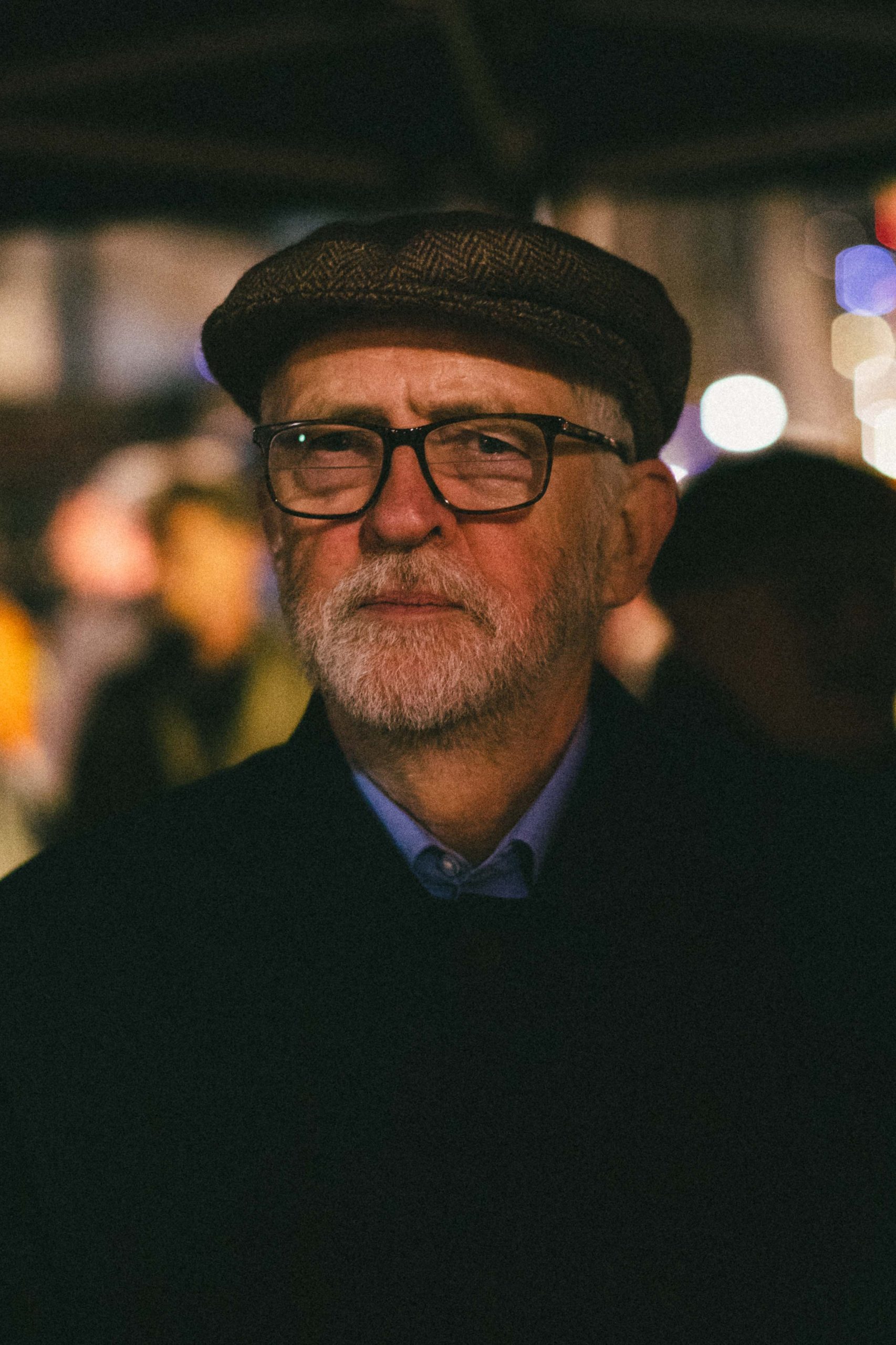 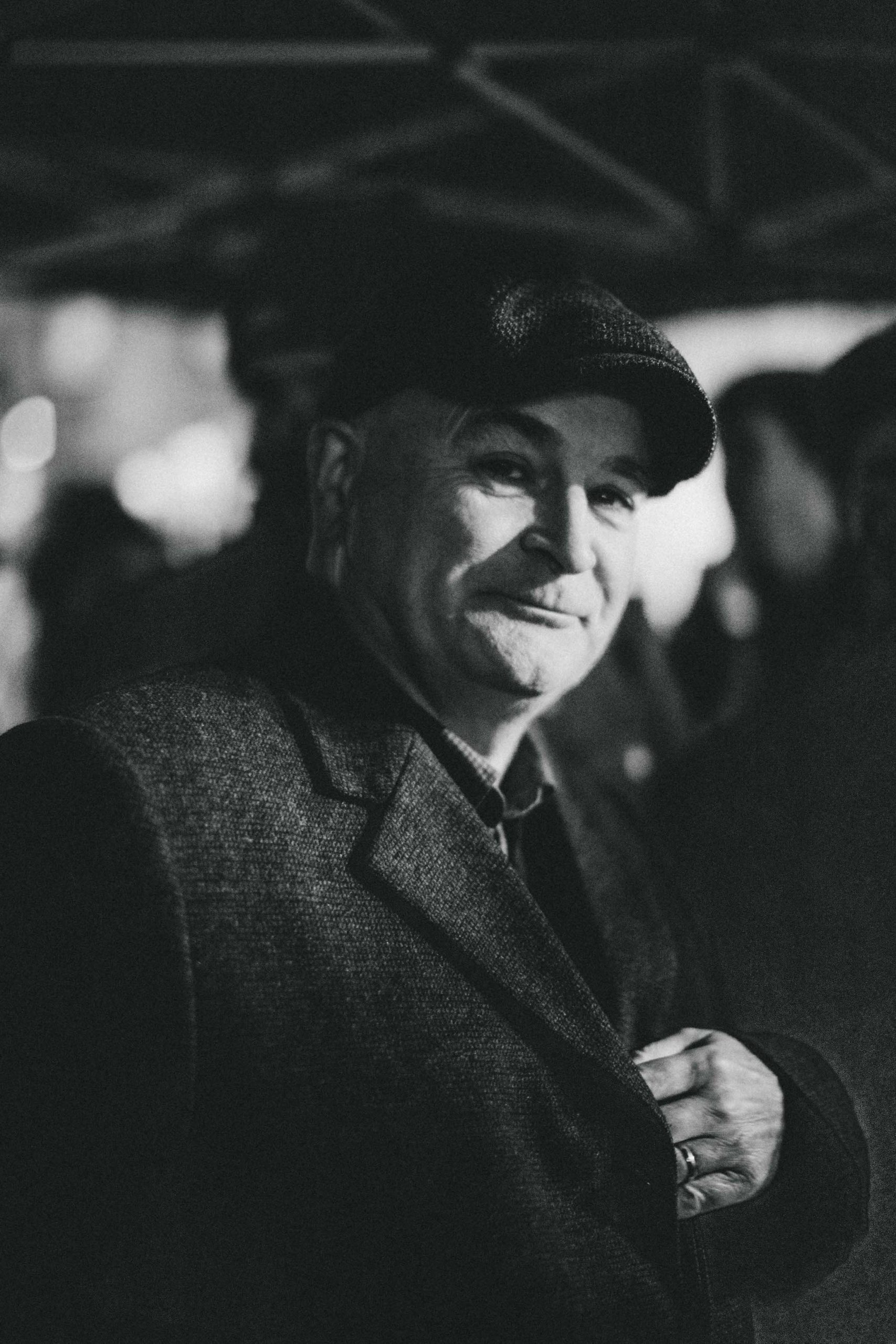 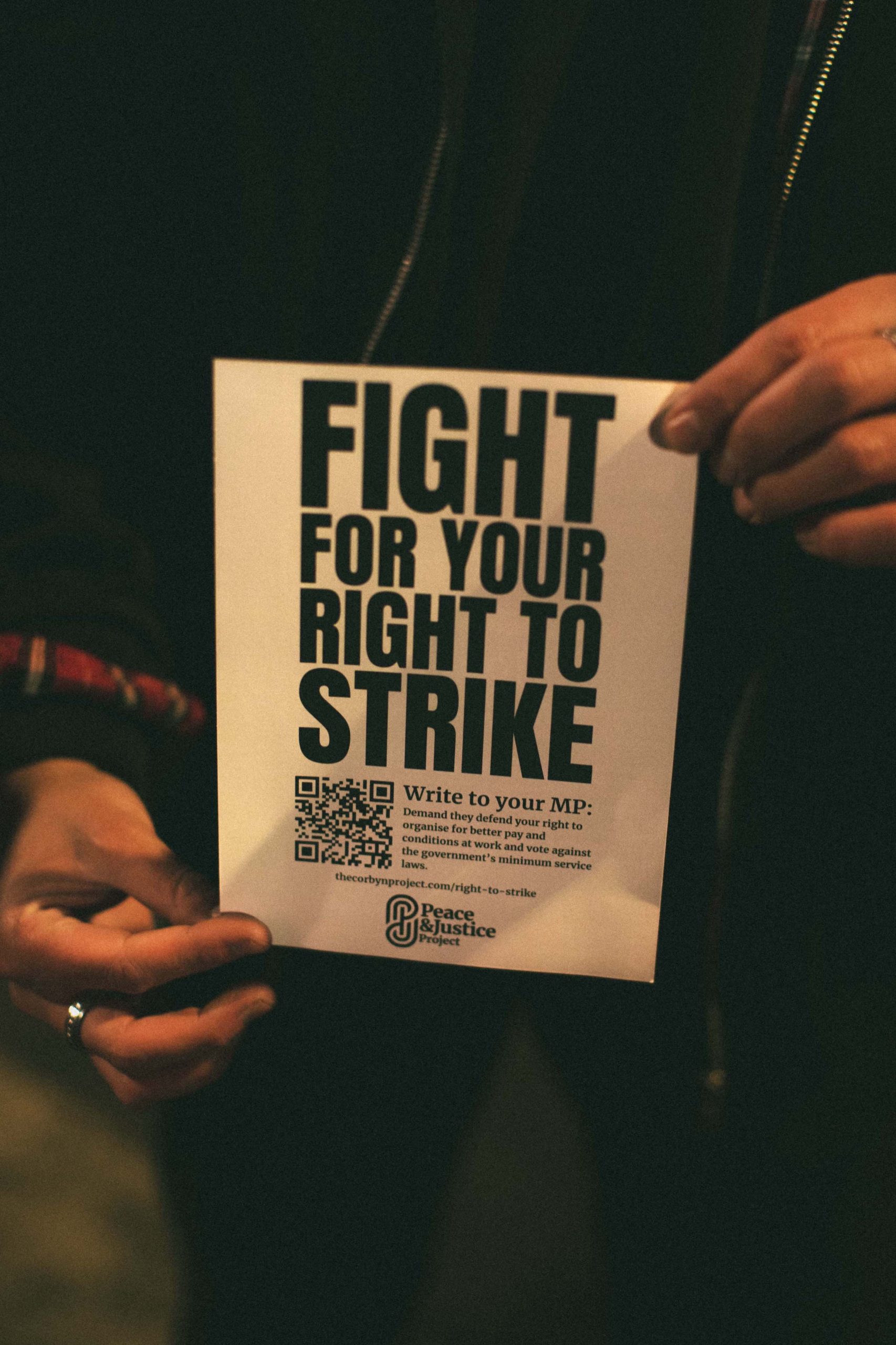 Linkedin
OTHER ARTICLES
After fleeing the war in Ukraine, people are finding it impossible to secure affordable and decent housing in the UK.
Following the release of his debut single, Deyaz talks battling addiction, dealing with his struggles through music, and building a budding music career from his living room.
Since 2007, Gideon Mendel has made 20 trips to document floods in 13 countries. The result is an alarming record of what has already been lost to the climate emergency.
Theo McInnes’s photos of the annual event provide an intriguing snapshot of contemporary Britain.
David 'Dee' Delgado’s photo project is about honouring and uplifting the city of his youth, and a world rapidly disappearing under the relentless onslaught of gentrification.
After blocking the Scottish government’s gender recognition reform bill, Westminster is now devising further changes to the law to make it harder for trans people to self-identify.