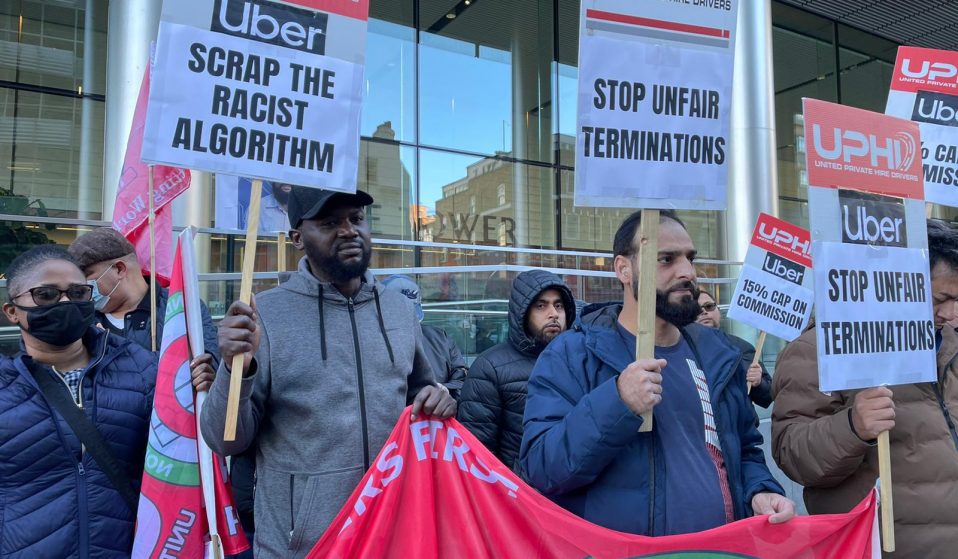 This week has seen protests led by IWGB against Uber over its ‘racially discriminatory’ face ID checks.

This week has seen protests against Uber over its ‘racially discriminatory’ face ID checks. Campaigners say it’s just the latest scandal when it comes to the tech behemoth’s record of treating its workers abysmally.

In April 2021, Hasan* was working as a driver for Uber when he was asked by the app to submit a photograph for the purposes of a facial recognition check.

The previous year the company had introduced a ‘Real-Time ID Check’. Hasan had chosen to complete these through an automated photo-review option (rather than through human review). After submitting his photograph, he received a message saying he had failed to verify his identity and that his account had been waitlisted for 24 hours. He was unable to work for those 24 hours.

A day later, Hasan was permitted to submit a second photo as additional verification. He was later informed by Uber that his account had been deactivated after a second attempt at verification. He was told: “Our team conducted a thorough investigation and the decision to end the partnership has been made on a permanent basis. The matter is not subject to further review.”

In June of this year, distraught, Hasan went to the head offices of Uber in London to challenge his deactivation. A member of staff at the front desk confirmed a match between the selfies and the profile picture of Hasan on the Uber files but they claimed were unable to do anything about it.

Hasan’s is one of dozens of stories of unfair terminations as a result of a racist facial recognition algorithm used by Uber, the International Workers Union of Great Britain (IWGB) claim.

"I've got to pay London rent and I've got four children. Once I'm deactivated, I don't get any benefits. If I'm not working I'm not getting paid."

The company relies on facial recognition technology provided by Microsoft called ‘Face API’. If drivers have opted for photo-comparison software they must take regular selfies which they submit through the app. Uber then shares the selfie with Microsoft which is subsequently compared with the profile picture attached to the drivers account and the driver’s licence. Those who do not pass the recognition have seen their accounts, and ability to continue working for Uber, terminated.

This week, IWGB announced that it was taking the company to court over the technology which they say is five times more likely to cause termination of dark-skinned workers. The case takes the form of a claim for indirect racial discrimination filed on behalf of one of its members whose account they say was terminated following a facial recognition error.

One in five darker-skinned female faces and one in 20 darker-skinned men fail the algorithm which, the union says, has profound ramifications for Uber’s workforce. The IWGB claim that Uber workers in London are  95 per cent people of colour.

Yesterday the union called for a 24-hour boycott of Uber, and held a demonstration outside of the company’s headquarters in Aldgate, London. Dozens of workers attended the demonstration which was addressed by former Shadow Chancellor John McDonnell and Labour MP for Poplar and Limehouse, Apsana Begum.

Speaking to Huck, Begum said: “My constituency has one of the largest numbers of private-hire drivers in the country and for months now, I’ve been making representations on behalf of constituents, particularly around cases of unfair dismissal and terminations without real due process.

“I feel really strongly about the exploitation of workers that’s been going on for a long time,” she continued. “Yesterday, I walked alongside drivers to deliver a letter and request a meeting from Uber. There was a line of police officers and no-one would come down to even take the letter. 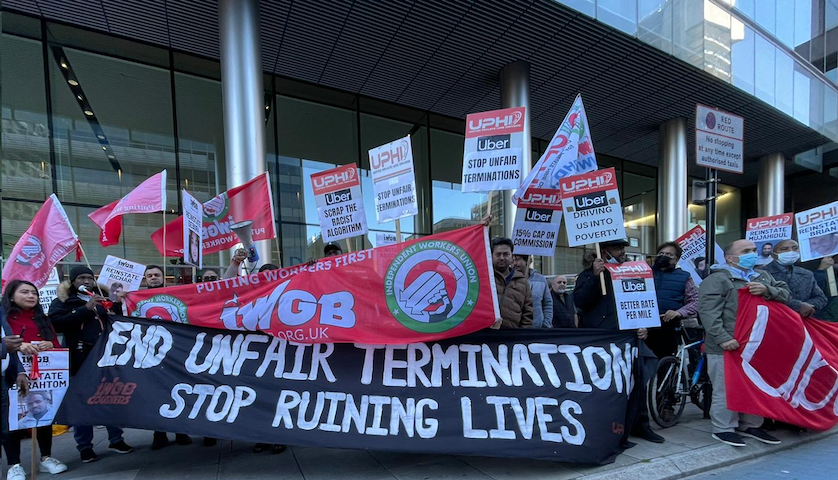 “I met with many drivers who told stories of unfair dismissal, or those they know who have been unfairly dismissed, and how much abuse and harassment they face in their roles and the lack of support in dealing with that. This, on top of the situation with facial recognition (…) shows a complete disregard for workers from a mega corporation like Uber.”

The strike marks the launch of a campaign by Black Lives Matter UK and the IWGB to demand Uber drop its racist facial recognition algorithm, reinstate unfairly terminated drivers and couriers and introduce the fair terminations process called for last year by more than 70 MPs. Striking drivers are also demanding an end to unfair terminations, as well as a liveable wage for all drivers, through introducing a better rate per mile, 15 per cent max commission, transparency of charges on customers, an end to fixed-rate trips, and a 50 per cent surcharge on out of area trips. The demands come after a Supreme Court ruling earlier this year declared that Uber drivers were workers and not self employed, as the company had previously asserted.

Nader Awaad, Uber driver and chair, United Private Hire Drivers branch of the IWGB, said to Huck: “ We will not be treated as second class citizens. We deserve equality, fair pay and job security and we are prepared to fight for it.” The IWGB claim that the case against Uber could force the company to scrap the entire system in favour of a less intrusive alternative.

Black Lives Matter UK said that the racially discriminatory face-ID checks reflect the app’s “complete lack of care for Black people and their livelihoods”. They added: “The gig economy, which already creates immense precarity for Black key workers, is now further exacerbated by this software that prevents them from working at all, purely based on the colour of their skin. Racist practices such as these must come to an end.”

The IWGB has represented over 200 drivers and couriers who have been unfairly terminated by Uber in the last year alone on a range of grounds, including facial recognition failures, false customer complaints and more. The vast majority were terminated with no proper notice, investigation, right to representation or chance to appeal. As workers, Uber drivers are not legally protected from unfair dismissal.

Henry Chango Lopez, General Secretary of the IWGB, told Huck: “Hundreds of drivers and couriers who served through the pandemic have lost their jobs without any due process or evidence of wrongdoing and this reflects the larger culture at Uber which treats its majority-BAME workers as disposable. Uber must urgently scrap this racist algorithm and reinstate all the drivers it has unfairly terminated.”

For Begum, the campaign marks the continuation of a concerted effort for workers rights. “If a campaign against a company like Uber was successful in it’s aims, it could change things from gig economy workers across the country,” she says.

Uber was contacted for comment on all of the accusations and assertions above, but at the time of publishing had not responded.

Linkedin
RELATED ARTICLES
OTHER ARTICLES
Sean Maung’s photos are a love letter to the Black and brown communities that make up New York.
Cindy Campbell recounts how her brother ushered in a new era of musical culture at a party she held in the Bronx in ‘70s.
The workforce is now gearing up for industrial action after receiving a measly pay rise, reports Ella Glover.
With skyrocketing rents, packed out viewings, bidding wars and more, renting in London has never been harder.
Thousands attended the annual event this year to wheelie through the city and call for ‘knives down, bikes up’.
The two-day long event returned to London this year, showcasing a spectacular parade, steel bands and Caribbean food.