News & Politics / Why intersexuality will be the next civil rights frontier

The last twelve months have seen the march of progress for gender and sexual equality gain momentum, but the next battleground is already coming into focus.

The last twelve months have seen the march of progress for gender and sexual equality gain momentum, but the next battleground is already coming into focus.

Amanda Saenz is a little croaky. The Seattle-based 22-year-old spent their weekend balancing social justice work – on this occasion, a 90-minute talk at local university – with long shifts at their day job, yelling out coffee orders to distracted café patrons. They’re charmingly hoarse after all this, but not enough to tame their passion for intersex rights.

Intersex is an umbrella term for the 1.7% of the population who are born with physical and/or biological traits such as reproductive or sex anatomy and/or a chromosome pattern that fall outside of the typical male (XX) female (XY) binary. For some, these traits are apparent prenatally, or at birth; for others, they emerge later in life, if at all.

Saenz, who made television history as the first intersex person to play an intersex character on TV (Raven, on MTV’s Faking It) was diagnosed as intersex aged 13, during a “non-traditional” puberty. “Instead of unfolding as a typical girl would, my height skyrocketed, my voice dropped and I got pretty fit; it was kinda cool,” they explain. “There were a lot of signs that indicated I might be intersex.”

It was a gym class football injury that led to Saenz’s diagnosis. They’d taken a “ball to the balls” as Saenz puts it, and though they didn’t know it at the time, the excruciating pain they were experiencing was a herniation of internal testes, a symptom of Partial Androgen Insensitivity Syndrome.

“I talked to my mom – we’re really close – and she set up a doctor’s appointment.” Numerous tests were carried out, “but no one told me their hypothesis while all of this was going on,” remembers Seanz. “I kind of resent that, because it meant I wasn’t really involved in the decision process. When I was told I needed surgery, I didn’t question it. A month later, I was under the knife.”

In the majority of cases – like Saenz’s – surgery is either medically unnecessary or completely deferrable, a choice better made when the individual is an adult, and better informed. Keeping their gonads meant Saenz ran the risk of developing cancer, “but that would have been way down the line, so at the time, surgery was absolutely not needed.” 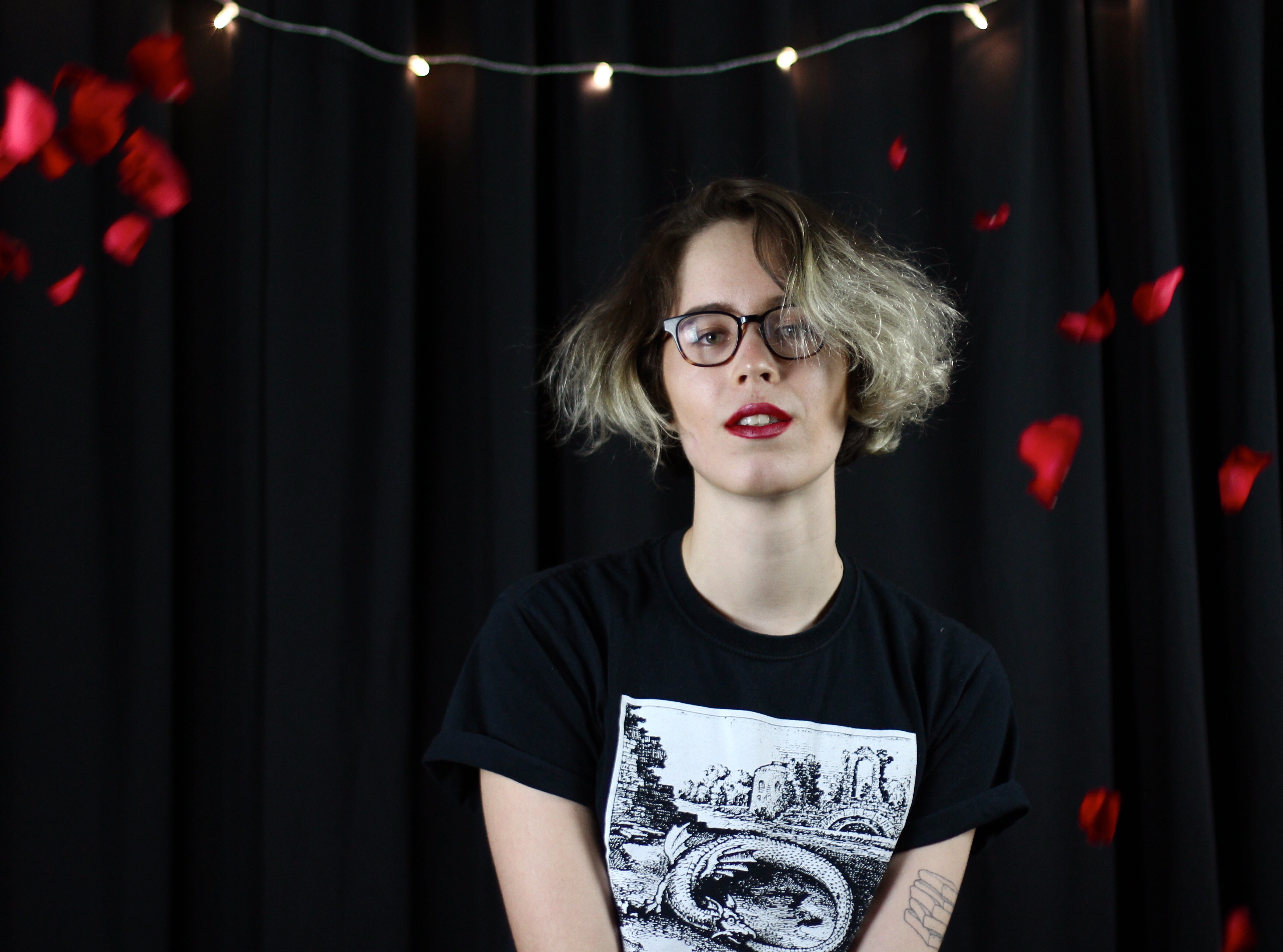 Undergoing the gonadechtomy – an irreversible procedure – means Saenz is required to take synthetic hormones the rest of their life or risk developing osteoporosis in their early thirties. “While I was informed [about this], the severity of that as a consequence was hardly emphasised. I hate that I’m dependent on the medical-industrial complex for a substance that my body would otherwise have produced naturally.”

The shocking truth is that the majority of surgeries performed on non-consenting intersex infants and children around the world have no medical basis whatsoever; they are done purely in the name of biological essentialism, to appease a male/female binary that – scientifically – is infinitely more complex than policy makers would have us believe.

“The so-called ‘free speech’ bus that drove around New York recently, saying ‘girls have XX chromosomes and guys have XY’? That is just factually untrue,” points out Saenz, who identifies as non-binary trans. Chimeras, for example, have two sets of DNA. “And just because the majority of the population might fall into male/female categories, it doesn’t mean we have to ascribe normative value to that.”

The intersex spectrum is beautiful in its diversity, cutting across class, race, gender, culture, geography and history, as Herculine Barbin’s memoirs prove. Genetic diversity is also the norm in the animal kingdom, as biologist Grace Polka’s applause-worthy viral meme reveals. And yet, in spite of these truths, and the hard work done by underfunded, volunteer-led groups around the world, needless operations on intersex young people still continue.

It’s a practice that activists and human rights bodies such as World Health Organisation, United Nations and Amnesty International are united in trying to bring to an end. Last month, activists across Australia and New Zealand convened to compose a landmark manifesto, dubbed the Darlington Statement. Central to the manifesto is a call for the immediate criminalisation of deferrable surgeries on intersex infants, with just reason.

Studies prove that surgical interventions can result in physical pain, loss of genital sensitivity, scarring and even sterilisation, not to mention psychological trauma and the risk that the sex assigned to them by surgeons will not match their gender identity.

“Informed consent is everything,” says Emily Quinn, Youth Co-ordinator at InterACT, the US-based organisation that Saenz works with. This means being made fully aware of the risks, alternatives and benefits to intervention, having access to other intersex folks like them and having the right to make a choice free of coercion. In some cases, intersex people grow up without any knowledge of the medical procedures they underwent as children. Others report being told that surgery was necessary only to find out later that this was not the case.

According to InterACT press materials, these procedures are not directly acknowledged by any law in the United States, and are still taking place across the country. Human Rights Watch is now conducting research around this, and is expected to produce a no-doubt damning report by this summer, says InterACT.

Countries such as Malta, on the other hand, have outlawed non-consensual medical interventions, and in Britain, groups such as IntersexUK are working hard to change policy at government level.

Support is essential, confirms Jane Czyzselka, a Shoreditch-based psychotherapist and counsellor. “[But] because there is so little psychotherapeutic literature about intersex people, many people in my profession don’t even know that intersex people exist, and if they have heard the term intersex, they often confuse it with transgender, or they have scant awareness or understanding about what it might be to live as an intersex person in a world that doesn’t recognise you.”

Czyzselka is committed to changing this, using qualitative research to develop informed industry practices. It’s essential work, given the historic shame and stigma the intersex demographic grapples with – a plight that impacts everything from intimacy and love to physical wellbeing and employment. Intersex people deserve the same bodily autonomy that trans people are fighting for, but while trans rights are now mainstream parlance thanks to high-profile activists such as Laverne Cox and the Free CeCe campaign, intersex struggle is still largely off-radar.

Thankfully, this is changing, and smart, engaging youth advocates like Saenz are an essential part of this shift, says Kimberly Zieselman, InterACT’s Executive Director. “It’s only in the last 2-3 years that we have had young people in their twenties willing to speak publicly [about being intersex], and its literally just been the last year or so that we’ve had teen members who are ready to speak out.”

It’s a complicated time for civil rights; with the gains has come the alt-Right backlash. How will intersex communities fare under Trump, a POTUS actively engaged in erasing scientific data that inconveniences his post-truth rhetoric? Intersex people may not even be on the government’s radar, says Saenz, which in itself causes problems.

“A lot of our issues and goals are tied to LGBT ones, and clearly the Trump administration has no love for them; they don’t even exist according to the White House website. That said, there is a lot of work being done by the medical community to [fight the stigma of being] intersex and build a new treatment paradigm, and I think that work is relatively well-maintained because doctors are scientists and scientists have beef with Trump.”

“Anti-trans efforts often end up targeting intersex people too,” points out Quinn, “since our bodies [also] transcend typical ideas of male and female. When people are divided for things like bathrooms based on things like chromosomes, how does that work for someone who has lived their entire life as a woman but happens to have XY chromosomes?”

And yet, Saenz notes, intersex people are oddly absent from this national conversation. Historically, intersex people have been both hyper-visible and conspicuously absent – the former when they’re sensationalised by the mainstream, as the tragic and sexualised; the latter when it comes to everything from legal statues and sex education curriculums to airport body scanners.

But as growing chorus of voices come to the fore – a chorus that include supermodel Hanne Gaby Odiele, who came out last year – the tide is turning.  The message from activists in Australia is clear: “the intersex movement… has come of age, and will no longer tolerate being silenced.”

How can they make this happen? Ask Saenz, who’s presence at a youth conference last year prompted a teenage participant to out themselves in a room full of their peers during the Q&A segment.

“They were very emotional – they’d just been diagnosed, they were still processing it – but they came out. Their courage just blew me away.” How did it feel to know Saenz had facilitated this disclosure? “It was very humbling, and not something I expected at all. I’m never cognisant of who my story reaches, or how it affects people, so to be reminded was humbling. That’s the main reason I do this. I just really, really want material change for intersex people.”

Linkedin
RELATED ARTICLES
OTHER ARTICLES
After fleeing the war in Ukraine, people are finding it impossible to secure affordable and decent housing in the UK.
A new law change is enabling Britain’s donor-conceived children to know the truth about their origins – but campaigners say the fertility industry must do more to protect people.
A new film from Berghaus traces the story of Adam Raja, who left behind a turbulent upbringing to discover the healing power of climbing.
After blocking the Scottish government’s gender recognition reform bill, Westminster is now devising further changes to the law to make it harder for trans people to self-identify.
Zsófia Sivák’s ongoing project documents the country’s tavern culture, preserving a once defining part of rural life.
The pro skateboarder withdrew from the 2020 Olympic Games so he could come out as trans. Now, he’s hoping to encourage others to live as their authentic selves – within the sport and beyond.