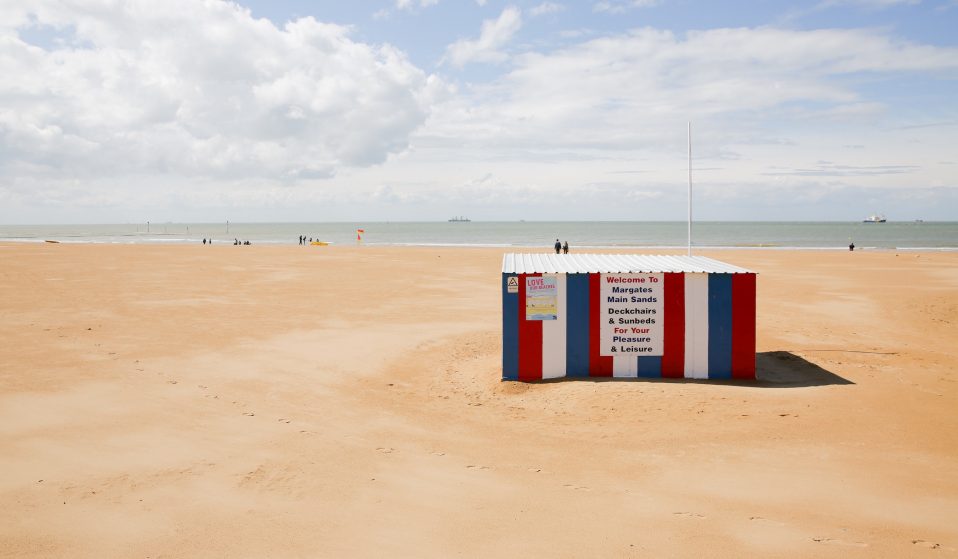 An influx of visitors to the Kent coast is benefitting private landlords and lettings platform Airbnb, while local people are being forced out of their homes.

In recent years, an influx of visitors to the Kent coast has caused house prices to soar and a sense of community to be lost. While private landlords and lettings platform Airbnb benefit, local people are being forced out of their homes.

Seaside towns in the UK have always held a certain charm for both visitors and locals. Once the preserve of health conscious Victorians, who travelled to the coast to take in the sea air, seaside towns have occupied an important place in the hearts of families up and down the country for generations. They have represented bastions of equality, where people – from the upper to the working classes – can enjoy a day on the beach, returning home exhausted, windswept and satisfied. Regretfully, some British seaside towns have fallen into disrepair as time has gone by, becoming outposts that time, culture, and successive governments have forgotten.

However, in recent years, seaside towns along the Kent coast have been experiencing a boom, with more and more visitors arriving each year. The pandemic has accelerated this burgeoning trend, with the district of Thanet (home to the likes of Margate, Ramsgate, and Broadstairs) seeing a 71 per cent increase in train travel at peak times this summer. And growing numbers of visitors are returning to settle for good, relocating in the promise of more affordable house prices and a better quality of life. With Covid allowing more flexibility to work from home, almost 60 per cent of London renters have now considered leaving the capital for the coast.

Margate has been experiencing one of the highest rates of incoming tourists each year. The reopening in 2015 of the UK’s oldest theme park, Dreamland, has seen visitor numbers nearly double annually. The building of the £17.5 million Turner Contemporary art gallery in 2011 has also contributed to regenerating the area, and bestowed Margate with further cultural capital.

On the face of it, Margate is in its heyday. However, the town is becoming a victim of its own success, facing a local housing crisis that’s spiralling out of control. The town’s enviable Victorian properties are being snapped up at an alarming rate, by Londoners escaping the city, or by private landlords letting out to tourists in peak season. The latter is a particular problem for the town, with renting platform Airbnb monopolising the already crowded lettings space. Locals hold Airbnb directly responsible for the dwindling reserves of affordable housing available for long term residents. Now, with the pandemic bringing the four-year Airbnb struggle to the boil, anger in the town is bubbling over.

Will Pitts is the owner of Forts café, a popular spot in Margate’s Cliftonville area. “Being a small business owner who opened just over a year ago, I have seen first-hand the changes Margate is experiencing,” he says. “It’s certainly undergone rapid gentrification even since I’ve been here. I used to manage a coffee shop in Shoreditch, and when we opened the shop in Margate, we were seeing the same people coming in. That’s why they call it the ‘Hipster Express’ (the train from Margate to London). Of course, there’s a bit of animosity towards people coming down from the city. There are groups in Margate who hate the ‘DFLs’ as they’re known down here (the ‘Down From Londons’). It’s certainly one of the more fraught times in Margate’s history”. 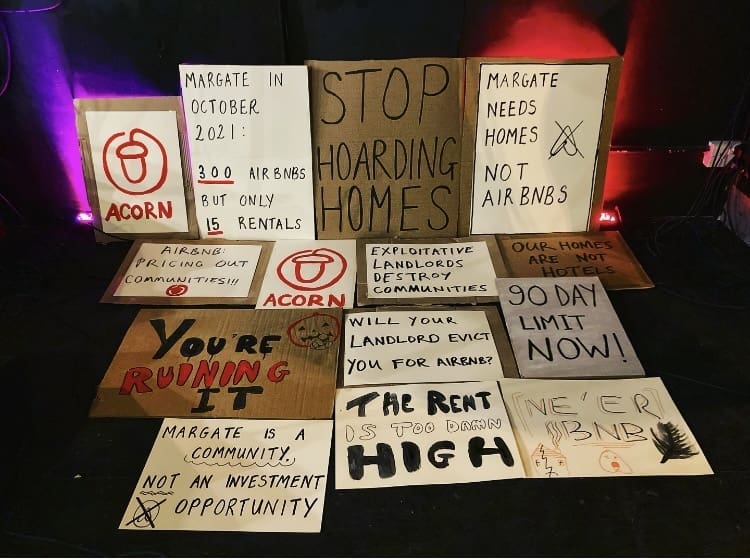 In response to the very real, immediate threats residents are facing, ACORN Margate was established earlier this year. The group campaigns against insecure housing, polluted environments and inequality in the town. For them, the Airbnb crisis is just the latest battle in an ongoing fight against gentrification in the area. The startling realisation that Thanet has the second highest rate of child poverty in the South of England, yet tourists occupying luxury Airbnbs is at an all time high, simply added fuel to the fire.

Tim Garratt, member of ACORN Margate, explains: “In the last few years in particular, we’ve seen how exploitative landlords have taken advantage of the lack of regulation. They’ve helped to create a two-tiered housing situation, where working-class residents face slum-like conditions but holiday-makers and well-paid individuals expect top quality accommodation, and are willing to pay over the odds for it. Last month, there were 300 properties listed on Airbnb, but only 15 rentals on the market. This artificial scarcity is driving prices up and forcing people out.”

Garratt mourns Margate’s vanishing sense of local community, eroded by tourists who visit during the summer months only to leave essential properties empty in the winter months. “Without grassroots organising in the community taking on unscrupulous landlords and demanding effective action from the council, Margate could soon become a ghost town, with endless Airbnbs empty for most of the year. The community here already faces serious challenges with massive unemployment, endemic health issues and serious lack of local infrastructure. Airbnb landlords are taking advantage of Margate’s vulnerability.”

Robert Yates, Thanet Council’s Shadow Cabinet Member for Finance, is a key proponent in the battle to enforce mandates on Airbnb. “Currently it’s unregulated, it’s a wild west out there. There’s no limit to how many Airbnbs you can own, or how many can be on a street,” he says. Yates notes that Liverpool and Brighton have recently put motions forward about Airbnb, so there is a growing awareness of the problem across the country. “When people are being booted out of their homes across the country to be replaced by short term renters who don’t really contribute to the community, we have a serious problem.”

Locals pushed to a breaking point are taking action into their own hands. On 12 October, ACORN Margate organised a protest outside the Thanet District Council in Margate to make their voices heard. They were calling for planning restrictions on short term rentals and a 90 day annual limit for entire home holiday rentals in the District. “London is the only place where you have a 90 day limit on Airbnbs; which means Airbnb can’t advertise a property on the platform for more than 90 days in the year,” explains Yates. “We are trying to emulate the London model so that communities can afford to live in the place they grew up in.”

However, when the motion was brought to Thanet District Council, the Conservatives refused to even debate it. Yates thinks this is down to the strong retaliation from Airbnb, who have been increasing social media advertising for the Thanet District.

When asked to respond to these allegations, Airbnb provided the following response: ​​“We take housing concerns seriously and put forward proposals for a short-term let registration system to the UK government this year. We welcome the government’s decision to take this forward and look forward to continuing our constructive talks. The majority of Hosts on Airbnb in the UK share a space in their own home and nearly a third say that the additional income is an economic lifeline. According to research by Oxford Economics, travel on Airbnb is estimated to have contributed a total of £5.1 billion to the UK economy in 2019, supporting thousands of jobs.”

While the odds seem to be in Airbnb’s favour, Yates takes hope from the examples set by European city hotspots. “Big cities like London, Amsterdam and Barcelona are dealing with the problem, because they are seeing the negative impact on their communities first-hand. There’s also a financial incentive for towns to regulate; quite often B&Bs pay less council tax than households, which reduces the area’s income.” While critics of crackdowns in these cities argue that hosts are suffering from unjustifiably heavy fines and loss of income, the general consensus is that excessive tourism needs to be regulated to prioritise housing supply for locals.

“I’m hoping political parties will get involved in this conversation, and that the Labour party particularly will get behind the anti-Airbnb movement” says Yates. “I think we are heading in the right direction. When people realise they have an Airbnb on both sides of them, and no neighbours anymore, maybe then they’ll sit up and notice.”

Linkedin
RELATED ARTICLES
OTHER ARTICLES
Members of the collective share some of their reasons to run as part of #UnitedBySummits, a campaign that looks to uncover transformative power of the outdoors.
The group’s leader and cofounder Randy Savvy talks nurturing the next generation of riders and keeping Black cowboy culture alive.
The government’s failure to take long Covid seriously has led to the formation of a group campaigning for the thousands of forgotten victims of the illness.
To mark the anniversary of the mass trespass of Kinder Scout, a group of hikers came together with the intent of creating a new, fully inclusive culture for rural spaces.
The photographer recalls working with some of the biggest names in the business – from Salt-N-Pepa to the Sex Pistol – at a time when music magazines played a powerful role in shaping the scene.
Over the weekend, London locals came together to resist a pre-planned police raid targeting delivery drivers.