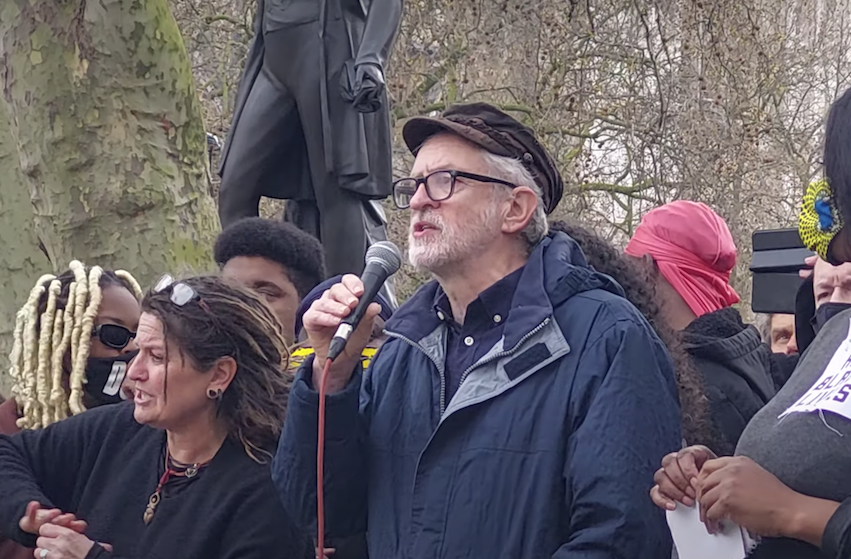 Ahead of more protests this weekend opposing the Government’s draconian policing bill, Jeremy Corbyn outlines why we must keep the pressure on and protect our right to speak out.

Ahead of more protests across the country this weekend opposing the Government’s draconian policing bill, Jeremy Corbyn outlines why we must keep the pressure on and protect our right to speak out.

The last six weeks have seen demonstrations and protests up and down the country. Starting with the violent break up of a peaceful vigil in memory of Sarah Everard, explosive scenes of unrest and instances of unrelenting police violence have seen thousands out on the streets and dozens injured in protest against the incoming policing bill.

The bill contains provisions which would allow the police to limit or shut down protests that they deem to be a “serious annoyance”, as well as harsher sentences for those vandalising statues. It also includes plans to criminalise trespass which campaigners say would be used to target Gypsy, Roma and Traveller communities. The #KillTheBill movement has seen hundreds of protests across the country, with two national days of action taking place so far – each with around 40 different towns and cities holding events. This weekend, on May 1st, there will be a third national day of action with events listed in 41 places.

Ahead of these protests, we sat down with the former leader of the Labour party Jeremy Corbyn to talk about the movement, the events in Clapham that kickstarted it and why he’s opposing the bill.

Would you agree with the verdict of the report that absolved the police’s actions and tactics on the night of the Clapham vigil?

Well, quite clearly, the police tactics were wrong and they obviously didn’t work, either. The police had already been warned by Bell Ribeiro-Addy, the local MP, and others, that they should work with the local community, with Sisters Uncut and others that were going to be there to ensure there was a respectful socially-distanced demonstration and that could have, should have been achieved, but for reasons best known to themselves, the police decided that they had to clear the place.

Surely, the message is that you should work with the community? Many, many people are totally appalled and shocked by Sarah’s death, because she represents a woman walking home at night on the streets. She ought to be safe. She wasn’t. She’s dead. And, I think it’s right that people should want to come out and show respect to her, but also make a point we want our streets to be safe for everybody to walk around.

as the police began to reportedly make arrests, those in the crowd turned on the lights on their phones and chanted “shame on you” pic.twitter.com/voPzMwRl2O

The aftermath of the vigil saw protests erupt across the country. Much of the press around those protests focused on the accounts of police injuries or protestor violence, some of which have been rescinded or corrected after the fact. What is your view on the media machine that’s spinning the truth?

There’s always a race between the mainstream media organisations over who’ll be the first to get a story out and because of this incredible speed with which they feel the need to work, they don’t bother to check. They don’t bother to think about what they’re saying or what they’re doing or the effect it might have. The story is the violent demonstration, a story is a police officer being injured, a story is more people joining in, and we then get, very rapidly, statements from politicians saying: ‘This must be dealt with in the strongest possible terms,’ etc, etc.

Now, I’ve been involved in demonstrations all my life, where they’re well prepared and the stewards know what they’re doing and the police understand and respect what the stewards are doing. We had over a million people in 2003 opposing the Iraq war; I think there may have been one arrest. The police refused to cooperate with the organisers of either of the [Kill The Bill] demonstrations and instead, decided that they would take robust tactics, encouraged in this by the Home Secretary, and were encouraged in the belief that they would get political cover for whatever tactics they followed.

The police bill moves us much further down the road of police control of the right to protest. If you start controlling the right to protest two things are going to happen: one, is that a lot of people will be frightened to go out and demonstrate and will be effectively silenced as a result of it and if you silence people, then you’re actually setting off a boiling cauldron that one day the lid will blow off. There has to be that historic right to demonstrate.

Demonstrations do change things because they change opinions, they might not do it that day, but they do it over a much longer period. Look at, historically, the role of demonstrations. The Chartists, the Suffragettes, the hunger marches, those that campaigned against sus laws, those civil rights demonstrations in the United States. All of those made a massive impact on history, and so I am strongly opposed to this police bill.

I think instead, what we need is a charter of our civil rights and civil liberties, which says that we can speak out, that we can protest. The idea that you have to have a silent protest outside parliament is ludicrous. We’re all elected to be there and I have to say there’s something quite therapeutic about being in the chamber when it’s a big demonstration outside. The noise doesn’t interrupt the proceedings but in the background, you can hear a sort of din of people protesting about whatever we’re putting through, and all through the Iraq debate that happened as have others since then.

Protest is an important part of a democratic and free society. If this police bill was being proposed in a country whose government the UK doesn’t approve of, they would very quickly be condemning it as an infringement of civil liberties and it’d be right to, but if we condemn it elsewhere, we’ve got to condemn it here as well. Sauce for the goose is, after all, sauce for the gander.

people shout peaceful protest and put their hands up whilst police use shields to batter protestors. it’s carnage. pic.twitter.com/b5zKFimqfd

The bill is a huge piece of legislation with lots of different parts to it. Could you explain a bit more about the specific parts that particularly concern you?

Well, it’s essentially the power that police have been given to decide who can protest and who can’t protest, and then insisting it’s a silent protest [or one that does not cause ‘serious annoyance’] when it takes place and if it [does cause serious annoyance], the police can then move in and break it up.

Somebody please tell me how if 5000 people arrive in Parliament Square, and they’re not silent, what is anybody going to do about it? What are they actually practically going to do about it? And do the police really need powers to decide what is and what is not a legitimate demonstration? Now I get it, if somebody wants to organise a racist demonstration, to promote hate speech in a particular place, then I think that is wrong because I think if somebody is trying to promote racism in our society, it’s wrong, it’s unacceptable.

But if somebody wants to organise a demonstration to protest about atrocity somewhere around the world, about the treatment of minorities in this country, or in support of the rights of people to express their own faith, or whatever else it happens to be, then it shouldn’t be a matter for the police to decide whether they’ve got a legitimate voice or not. It should be themselves who decide to do that. When you start suppressing the right to speak out, an awful lot of other things follow from that.

“democracy and rights were never handed down from above…i want to live in a world of peace and justice. in a world of human rights” @jeremycorbyn finishes to huge applause and chants of “oh, jeremy corbyn” pic.twitter.com/GeclAMeZ9C

You’re going to be at the protest today [April 3rd], would you encourage people to come down to this and subsequent protests and to get involved in the movement?

What I would encourage is people to speak out against the police bill. When the bill was first proposed, it was going to be a consensus of both front benches that the bill would go through i.e., either by positively voting for it or abstaining. A number of us said, straight off, we would not be supporting this bill because of its draconian measures. That set off, interestingly, a big social media movement, which ended up then with a specific vote against the police bill.

It now goes into Committee stage, but that’s now been delayed because of ‘parliamentary arrangements’ we’re told, and the bill may not even get to the House of Lords till late summer, or maybe after that, and then eventually comes back [to the Commons]. During all that time, it’s very important that people keep vigilant and keep opposed to this particular bill.  So having demonstrations, while socially distancing, is important and I think we should all be able to and continue to speak out against this bill and defend the historic right to protest.

This weekend demonstrations are taking place across the country against the Bill. Huck will be reporting on events in London over on our Twitter account.

To find out more about the Kill the Bill protests, check out our new series on Instagram.

Linkedin
RELATED ARTICLES
OTHER ARTICLES
With skyrocketing rents, packed out viewings, bidding wars and more, renting in London has never been harder.
Ahead of the release of their first collaborative album, the producer and rapper talk psychedelics and the state of UK hip hop.
Rhiannon Adam spent three months capturing an ageing society wracked by division, isolation, and the aftermath of scandal.
In his 2008 series, the photographer pictured himself as Angela Davis, Martin Luther King Jr., Malcolm X, and other prominent figures.
The workforce is now gearing up for industrial action after receiving a measly pay rise, reports Ella Glover.
Yesterday thousands gathered outside Buckingham Palace after news of the Queen’s death broke.