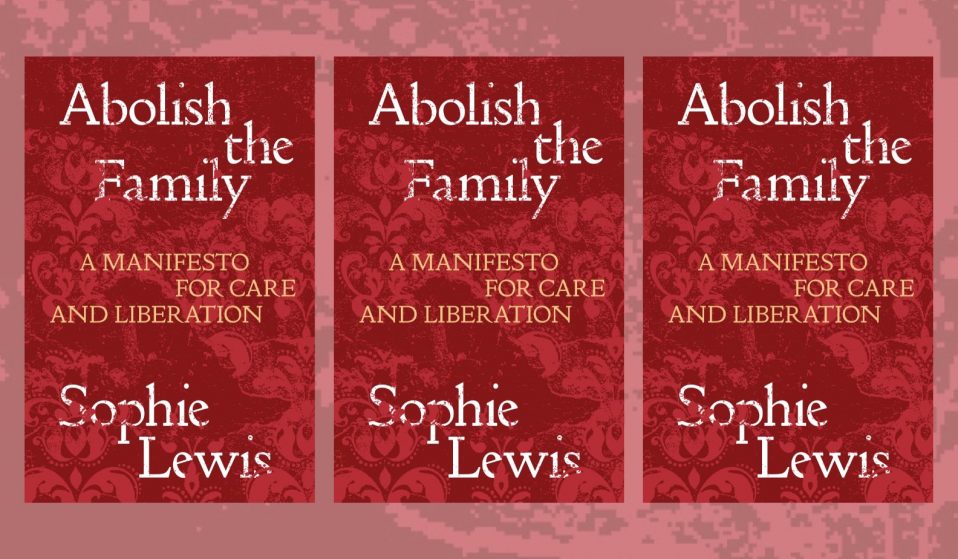 Sophie Lewis discusses her new book which invites us to imagine a world post-family.

Sophie Lewis discusses her new book which critiques the family as a capitalist construct, and asks us to imagine a new world beyond it.

What if, instead of being responsible for feeding your family, food was available for free – for everyone – in a public canteen? What if you didn’t have to spend half your income per month on shelter for yourself and your family? What if children were autonomous – free to choose how and with whom they want to live? What if, instead of caring for one another in private units, we democratised care, love, and support, excluding nobody?

This is what writer and academic Sophie Lewis wants you to imagine when you hear the phrase ‘abolish the family’. It’s not, as she writes in her book Abolish the Family: A Manifesto for Care and Liberation, a case of “the left trying to take grandma away and confiscate kids”, but rather a rejection of the family’s privatisation of care and the devalued labour that comes with it.

“The family’s function,” Lewis argues, “is to replace welfare and to guarantee debtors. Masquerading as the choice, creation, and desire of individuals, the family is a method for cheaply arranging the reproduction of the nation’s labour-power and securing debt repayments.” Its structure – legally and economically enforced by the state – maintains class hierarchy and absolves those outside of the family unit of responsibility for those within, creating a society marred by ownership, scarcity, and sacrifice – one that we’re “basically blackmailed into”.

But, wait, you love your family, right? Well, responds Lewis: “You ought to know that you are one of the lucky ones. And I am happy for you. But everyone should be so lucky, don’t you think?”

In Abolish the Family, Lewis introduces the concept of family abolition, tracing its history via revolutionary philosophers and modern liberation movements, and acknowledging that it’s inseparable from the abolition of capitalism. She dissects the complexity of the history of family, which “emerged as a category of ‘violent forms of humanism’”, and yet which, for Black, Indigenous, and immigrant families, was historically formed as a site of survival. She urges the reader to consider the family as “unrealistic and utopian”.

Speaking to Huck, Lewis defines what exactly she means by abolition, invites us to imagine what life might look like post-family, and reflects on how the current climate might make people more open to the idea of family abolition.

Why is it important to unpack and rethink the concept of family?

Family represents a utopian aspiration to be unconditionally held and cared for. I’m not really knocking that desire, but [the concept of family] can very easily slip into becoming a ‘team’ that’s competitive against the rest of the world. This then gets institutionalised through the imperative to lay down your life and work for your family, and to be legally and financially responsible for them in law – in a contract with the state. We might want to question how we consent to what is ultimately an economic mode of organisation of certain types of work.

There’s this wonderful book from the 1980s called The Antisocial Family by Michèle Barrett and Mary McIntosh, [which proposes that] the family is actually the anti-social institution. It’s the opposite of what Margaret Thatcher said – well actually, it’s the same as what she said but for opposite reasons. She said, ‘There’s no such thing as society. There are individual men and women and there are families’. Like, yeah, exactly, there are families, that’s why there isn’t society. That’s not the story we get told by politicians – families are imagined as somehow the same thing as the people. But what if it wasn’t? What if it actually limits the forms of sociality and care that we can all enjoy? You could approach it from another angle and think about it in terms of pure fairness. A family is supposed to be there for us all, but it very manifestly is not – and that’s a bit of a harsh lottery for those of us who fall through the cracks.

Discussions of family, in various forms, have been particularly pervasive in recent years – whether that’s via conversations about the labour of parenting in light of the pandemic, or in relation to the forced births that will happen now Roe v Wade has been overturned. How do you expect the concept of family abolition to be received against this backdrop?

I do think a climate of forced birth makes people, well, first of all, really angry, and then maybe liable to join up some dots and make connections between forced care and unwaged reproductive labour, and how it props up capitalism and the scarily retrograde ideas about gender and the home that are being imposed by a Christo-fascist mobilisation, which is working on multiple fronts at once. Since Covid, [there’s also] an appetite for the idea of challenging the family, [because it] made everyone realise how dysfunctional the private nuclear household is as a way of meeting people’s health needs at a population level, and spiritual needs at the level of neighbourhood.

So, there is appetite – even in very weird places. This neoliberal talking head, David Brooks, had this 9,000 word piece in The Atlantic called ‘The Nuclear Family Was A Mistake’. It was quite interesting to see how something as revolutionary as the demand to abolish the family could be recuperated for a neoliberal policy platform of forcing people to live with their grandparents and take care of them for free.

In Abolish the Family, you preempt criticisms of the word ‘abolition’ in relation to the family, but ultimately conclude that the privatisation of care – which you call family’s “most fundamental feature” – must be abolished so that “our species can truly prosper”. What does abolition mean in this context?

It’s very important to understand that abolition is not the same thing as destruction. I want to make the analogy to prison abolition, [which] is about taking the concept that prisons are proposing to provide, which is justice, and realising that in reality. So you have to build a whole world that would make the prison unthinkable before you’ve abolished the prison. When it comes to family, we [have to] start with building the world that would make us not need the family. That’s the question I want people to ask, like, ‘What kind of infrastructures would help us rely on the family less?’

One of the main things I did want to make sure gets addressed [in the book] is what abolition means and also which family I’m talking about, because that’s people’s most astute objection. [When it comes to the] history of Black, Indigenous, and immigrant families’ resistance to the state, the family is a site of creative survival that, in a sense, deserves to be celebrated. But – and this maybe gets a little big linguistic – it’s hurtful to use the same word ‘family’ for those techniques of survival and kin-making that, for example, captive people under slavery managed to light upon, and then to talk about nuclear private households that way, especially in the image of whiteness, and to say, ‘Just abolish it’, right? Sometimes people really want to object and be like, ‘How can you just universalise?’ But the truth is, capitalism does have totalising elements, and part of that is the privatisation of care, which no [form of family model] escapes, and which the state backs up with legal systems that are very clear on what your rights and responsibilities for your legal kin are.

When discussing how the family structure was imposed on formerly enslaved and indigenous people by society and the state, you write: “The family is a shield that human beings have taken up, quite rightly, to survive a war… Perhaps we have forgotten that the war does not have to go on forever.” Things don’t have to be this way – but why do you think we’re so resistant to change?

Maybe part of it is our attachment to scarcity – people get almost violently outraged when you suggest that they deserved more. There’s such an anti-utopian logic hanging over every aspect of our societies that while we think it’s okay to cultivate tastes and consumer preferences and aspirations, we don’t think it’s safe to cultivate needs. We want people to be ‘self-sufficient’. But what if free universal health care, free food, or being completely free of all forms of work was a need? We’re scared to produce more of ourselves in a completely different mould – it doesn’t feel safe.

What kind of alternative to the family should we consider? What might a world post-family abolition look like?

I’ve invited people to imagine what it would be like to have true freedom in the domain of relationships and not to worry about total responsibility for another person’s life, in connection with work. What would love look like if those massive lifelong relationships of sacrifice and indebtedness and obligation weren’t in place? Not to say that we shouldn’t do things for one another that are deep and selfless, but there are these economic ways in which we’re basically blackmailed into that sacrifice.

Of course, it’s not going to be a neat and tidy population-wide process getting there. As Michelle O’Brien and Eman Abdelhadi discuss in [Everything For Everyone], the wonderful sci-fi novel they’ve written about the process that gets us to family abolition, and also a liberated Palestine, the fall of the state, the fall of capitalism, and the beginnings of ecological restoration and decolonisation – they talk about how it’s not super useful to try and isolate any one of these things from the rest. In fact, it’s quite dangerous to think about abolishing the family in the absence of abolishing capitalism. If you try to abolish the family on its own, you have dystopia – it has to be part of the messy upheaval that is revolutionary insurgency.

Abolish the Family is out now on Verso Books.

Linkedin
OTHER ARTICLES
Photographer Jeffrey Silverthorne always treated his subjects – often those living on the margins of society – with empathy and respect.
Jack Lueders-Booth reflects on capturing the community that lived and worked along the city’s busiest railway route during the 1980s.
A new documentary tells the story of an unassuming cul-de-sac of 13 timber framed houses built by Fusions Jameen – London's first Black housing co-op.
Layna, Maysa and Amaya are three siblings looking to disrupt narratives around the sport. In doing so, they’re hoping to inspire a new generation of skateboarders.
Photographer Nico Froehlich’s series documents South London’s diverse communities, while also reflecting on their fragility amid rapid gentrification.
Through stills, anecdotes and film criticism, a new book examines the portrayal of women’s destructive emotions, reframing it as a challenge to patriarchal structures.