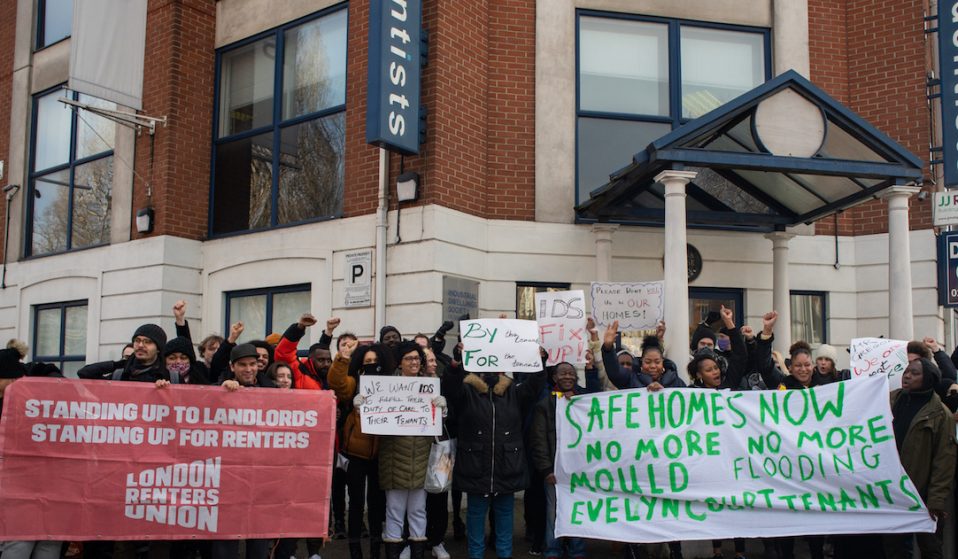 The failure to hold landlords to account is denying tenants their basic dignity, writes Bella Saltiel.

Last year, I was awoken in the middle of the night by water dripping from the ceiling onto my face. Later that night, lying awake, listening to rain collect in a bowl perched on my mattress, I felt worthless. Here is the source of my landlord’s power: if I am worthless, then I do not deserve a better home.

Local rumour says our landlord brought this property for cheap knowing the roof tiles had given way to rot. That he owns ten properties and he was dropped by a local letting agent because they were tired of his negligence. Perhaps the roof would never have leaked if he’d responded to our emails. Or if the selective licensing scheme for landlords (rolled out by 50 local authorities in England) fulfilled its aspirations to protect tenants.

The selective licensing scheme has been introduced by local councils to keep tabs on rogue landlords and the anti-social behaviour of tenants by ensuring landlords register with their local authority. It’s self-funded by licence fees collected from potential landlords who must prove they are a “fit or proper person” by providing documents on an online portal. These include gas and safety certificates as well as basics such as photos of the front and back of the house and tenancy agreements. However, crucially, unlike potentially high-risk HMO licenced properties (bedsits with multiple tenants from different households) these homes do not undergo in-person inspections, leaving thousands of substandard properties on the market.

'landlord' and 'landlady' are needlessly gendered words. pls be more inclusive by using 'landbastard' instead

Still, the licencing scheme does give councils the power to prosecute landlords who don’t follow the rules. According to recent data from the housing charity Shelter, complaints against landlords are on the rise, but Open Democracy has found that councils have turned a blind eye to illegal behaviour. They report that “half of councils in England and Wales have not prosecuted a single rogue landlord in the past three years”.

Last year, I reported my landlord operating without a licence in Waltham Forest. I asked the officer assigned to my case why the council does not inspect the property. She said that with 15,000 plus applications for a selective licence, they don’t have the capacity to view every property in the borough. In other words, they don’t have the budget, because the government has never come up with an adequate scheme to hold landlords accountable.

More recently I posed the same question to Waltham Forest Council. A spokesperson said the council intends to “inspect 25 per cent of properties during the lifetime of the licence”. They added: “We carry out reactive and proactive inspections throughout the year, and we work to ensure tenants are aware of the licensing team.”

The reality of renting does not match the current policy. In theory, tenants should be protected under the Consumer Protection from Unfair Trading Regulations (2008). It’s there in black and white: tenants are consumers, we are paying for a service from our landlords and yet the quality is inferior to many other consumer services which are regulated.

In a report for The Smith Institute (2019), renters are compared to the consumers of financial services, energy and water, telecoms and transport. These sectors are regulated by independent bodies that ensure standards are maintained. Even consumer goods – think TVs, fridges and other appliances – must be ‘as described’ and fit for purpose, or they can be returned within thirty days. If only I could return my faulty landlord. In comparison to these sectors, renters who are unhappy with the condition of their property have little power to make their voices heard.

Mick McAteer, a campaigner for economic and social justice at the Financial Inclusion Centre, says private renters do have some rights. But “unless you’re able to enforce those rights or, the relevant authority has the resources to enforce those rights on your behalf, then those rights might as well not exist,” he says. Maintaining a landlord’s register is a good way to start, but the local licensing scheme “doesn’t have any teeth [when] local authorities are so cash strapped”.

Mick argues that landlords should pay an annual levy to an independent regulator – much like the Financial Conduct Authority – making them “more committed” to their duties as a landlord. It’s simple enough: if you get landlords to invest in the machinery which authorises their business, then they’re less likely to let repairs slide. Those who do won’t be able to dodge a fine when the council is paired with a company who are outfitted with the resources to back them up.

I ask Mick whether part of the solution might be that all properties are checked before going on the rental market. But Mick says that wouldn’t be necessary: regular spot checks “send a signal to landlords that they better behave [because] there’s a good chance they’ll get caught”. Landlords, particularly those renting out multiple properties, need more incentives to start taking their side hustle seriously, and that has to come from the top.

Meanwhile, in my damp little flat, resentment breeds. When I find out that my landlord and his wife are senior people at senior financial institutions, it feels like I’m living out a London cliche, feeding their growing wealth. There are practical reasons I don’t leave, but also psychological: I am afraid somewhere else would be the same, or worse.

My experience is not unique. Shameless greed for cheap property strikes a chord when there are 4.5 million households in England who privately rent. According to The Smith Institute report, of the 1.5 million landlords in England, some 94 per cent are individuals, many of whom rent homes for “investment purposes” or to supplement their incomes (or pension).

‘I am the main breadwinner in my landlords family’ 😭😭😭 https://t.co/kvrnKwwNfF

It’s not only renters who suffer, Mick says, but the economy. People in the UK are spending over a third of their income on rent, leaving them poorer, with less spending power. Overpriced rent has also inflated the housing market, making it more difficult for people to buy at a time when substandard housing makes renters powerless until they own their own homes. Mortgages can be cheaper than rent and it’s easier to ensure a decent standard of living.

It doesn’t have to be this way. Unlike the very English obsession with homeownership, just 40 per cent of German households and 50 per cent of Swiss households own their home. Despite high numbers of private renters, the OECD reports Germans as mostly satisfied with their housing, which is well serviced and anecdotally, I know they can take ownership by redecorating as they please. Landlords are bound to execute repairs efficiently by rental contracts that are governed by the German Civil Code which prioritises renter needs and prevents no-fault evictions.

Currently, the private rental sector may as well be a black market economy. As tenants, we should not be subject to the whims of individuals motivated purely by self-interest. We should be treated as consumers with the right to enjoy dignity, quality and value for money. Instead, without regulation, we allow the landowners to lord over us all.

Linkedin
OTHER ARTICLES
The situation in Afghanistan remains dire, with many groups facing persecution at the hands of the Taliban.
To mark the anniversary of the mass trespass of Kinder Scout, a group of hikers came together with the intent of creating a new, fully inclusive culture for rural spaces.
Members of the collective share some of their reasons to run as part of #UnitedBySummits, a campaign that looks to uncover transformative power of the outdoors.
A new documentary explores the government’s efforts to quash the protest movements of the late ‘60s by any means necessary.
Photographer Robin Graubard’s debut book offers an unflinching record of turbulence and change across the Balkans.
In our first OFFF Dispatch piece, the Arce Studio founder shares her tips on standing out from the crowd.