News & Politics / As a journalist I gave Anjem Choudary a platform. In doing so I legitimised his radical views 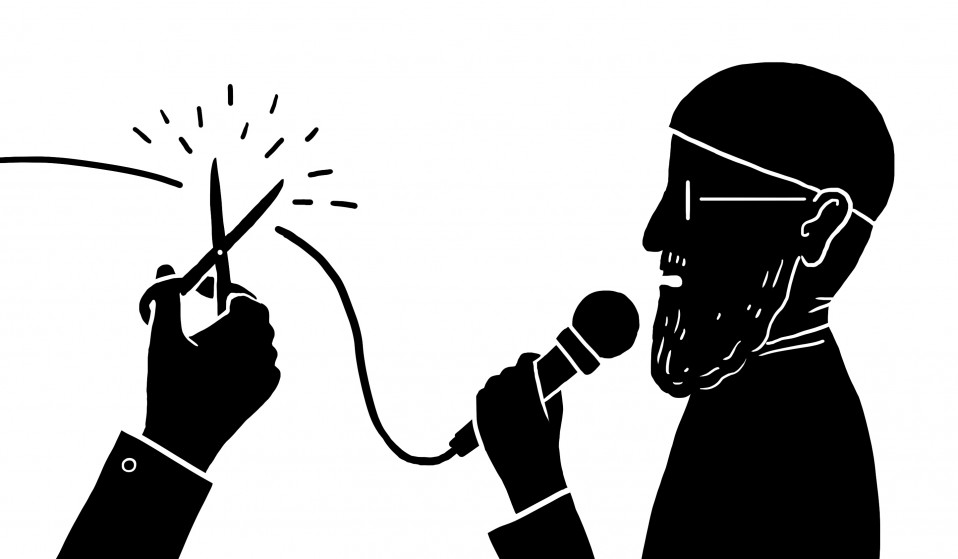 After months of reporting restrictions, it was revealed this week that British radical hate preacher Anjem Choudary has been convicted for urging people to support Islamic State. Oli Rahman argues it was the media that helped legitimise Choudary's views, something for which he too takes some blame.

After months of reporting restrictions, it was revealed this week that British radical hate preacher Anjem Choudary has been convicted for urging people to support Islamic State. Oli Rahman is a London based journalist, who used to work for one of the UK's largest news agencies. He argues that it was the media who helped legitimise Choudary's views, something for which he too takes some blame.

Life as a journalist or reporter involves meeting with and listening to people with a plethora of views. When we interview people like Idi Amin and Donald Trump, it doesn’t mean that we each condone their views.

But there is something deeply uncomfortable about finding yourself mid-interview with a radical Islamic preacher, and hoping he’ll say something outrageous enough to publish. Meet Anjem Choudary, the recently convicted extremist cleric famous for stirring up support in the UK for IS.

Anjem was at one point a regular media fixture, a bearded, softly spoken bloke with absurdly radical views who would appear in national papers and on news channels much more regularly than any other Muslim commentator. And while no-one would argue that appearing in a paper or on TV alone legitimises a person’s views, the issue of whether to allow people with violent, radical views a platform is a daily minefield for editors and producers. 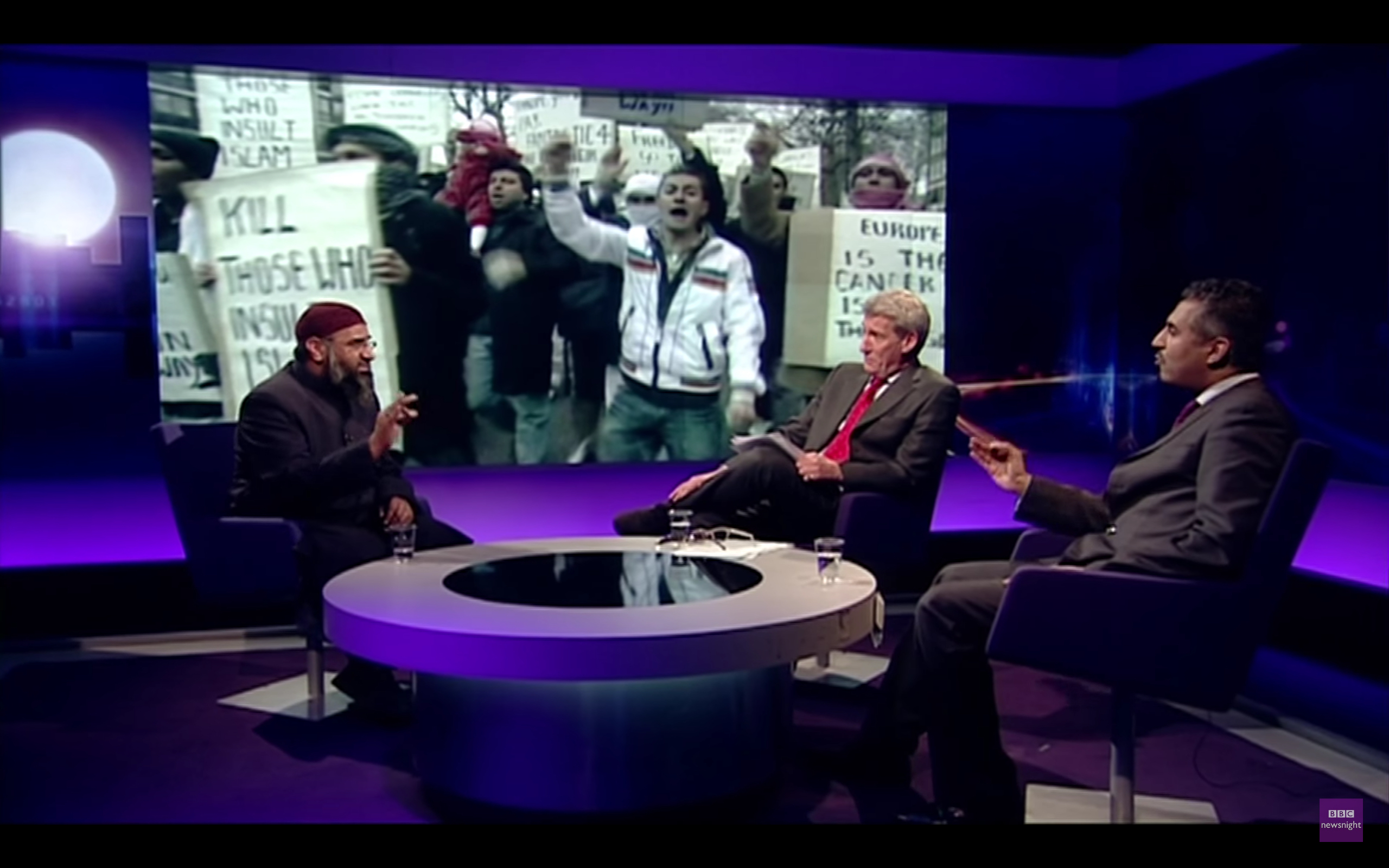 Anjem was presented on TV as a mildly threatening curiosity – Newsnight host Jeremy Paxman’s first question to him in a 2010 interview was: “How’s the campaign to move Britain over to Shariah law coming along?”

Yet there he was on our state broadcaster, a pundit specialising in radical Islam who is now facing a jail term after being convicted at the Old Bailey of inviting support for IS. Being on the BBC doesn’t necessarily make you credible, however it does give you an aura of plausibility.

I have a strange sense of discomfort at the thought that I was one of the people who, as a young reporter, inadvertently gave Anjem the chance to air his views. It does make me wonder if there are others who would admit, after a few drinks, to having felt ambivalent about giving Anjem a platform too.

As someone with a Muslim grandfather, it saddens me that he could be seen as representing Islam in any way. Choudary is the perfect poster boy for Islamophobia – an ideologue who supports Islamic State. His views represent what a minuscule proportion of Muslims around the world think, yet his views were in demand. They were bloody outrageous, and made for excellent copy.

At the wire agency where I used to work, Anjem was one of the people in our contact book who we would regularly call for comments after terror attacks. In the sense that we kept going back to him, we legitimised him. (For further reference, see Nigel Farage).

No, we never thought that Anjem had any legitimate arguments. He was just good at picking up the phone and keen to speak – a rent-a-quote pundit who a young reporter could rely on to deliver outrageous statements after incidents such as the Charlie Hebdo shootings. In short, it made for a good story.

The first time an editor told me to “give our friend Anjem” a bell, I found myself talking to a friendly and polite bloke, we chatted down the phone, it was a process he was clearly familiar with. In fact, he seemed more articulate than many of the academics I interviewed for science and health stories.

I usually had a list of questions that included one about whatever atrocity was in the news, something about Islamic State, and a few spontaneous ones to see if I could get an interesting reaction.

His answers were long and not always coherent.

Then I’d look at my notepad and realise that he was advocating gender segregation or the nationwide imposition of Shariah law. He’d refuse to condemn violent murders, but he did so with my ear listening, my pen poised. It was the media who wanted his hatred, other Muslims were left to pick up the pieces, condemn him, deflect the blame.

The quotes would sometimes end up in the papers the next day, with Anjem’s words seeming somehow even more alarming in print than they did on the phone. He would occasionally send out group texts notifying journalists of his demonstrations, as if he was organising a BBQ or a house party.

I was surprised that anyone considered going to them.

But they got coverage, and Anjem made the papers. As a reporter it’s sometimes easier to leave the ethics to the editors and tell yourself that your job is just to write down what people say. Yet every time something I had written about him was published it made me wonder whether as a journalist I was helping him spread his message.

On one occasion I remember he made my skin crawl, asking about my surname, if my grandfather had been a Muslim, and why I hadn’t been raised one. There was a probing quality to his questions, and I had the uncomfortable sense that the tables had been turned – Anjem was, briefly, interviewing me.

During the same conversation he casually mentioned that it would be good to talk more “over a cappuccino”. I politely declined his offer, thinking at the time that he was probably the extremist cleric version of a workaholic –  he just couldn’t stop himself from attempting to convert unbelievers.

Whether we like it or not, Anjem is now a public figure, someone who prays on often vulnerable people ostracised by society to further his own dangerous extreme aims.

Now the guy is heading to prison, an environment where people left behind by communities and structures are hidden away. It’s necessary, but given he tried to pull me into his circles as a journalist, I’m sure his fellow inmates will be targets too.

I can tell myself that I never condoned his ideas, that I always tried to challenge his views. But I also fear that in some small way I helped him on the path to notoriety.

Linkedin
RELATED ARTICLES
OTHER ARTICLES
Activists and campaigners are fighting back against new laws that would seriously undermine the ability to take industrial action, calling it an attack on fundamental workers' rights.
A recent High Court ruling against the right to wild camp in Dartmoor National Park sparked the largest land protest in history – and campaigners say their fight is not over yet.
Photographer Sean Maung reflects on documenting a small town in Pennsylvania afflicted by high levels of unemployment, poverty, violence, crime, and addiction.
A new film from Berghaus traces the story of Adam Raja, who left behind a turbulent upbringing to discover the healing power of climbing.
Tristan O’Neill’s shots of dancers caught in moments of reverie at the height of rave’s golden age are a testament to the UK’s legendary club culture.
Since 2007, Gideon Mendel has made 20 trips to document floods in 13 countries. The result is an alarming record of what has already been lost to the climate emergency.