News & Politics / Junk food is not the problem 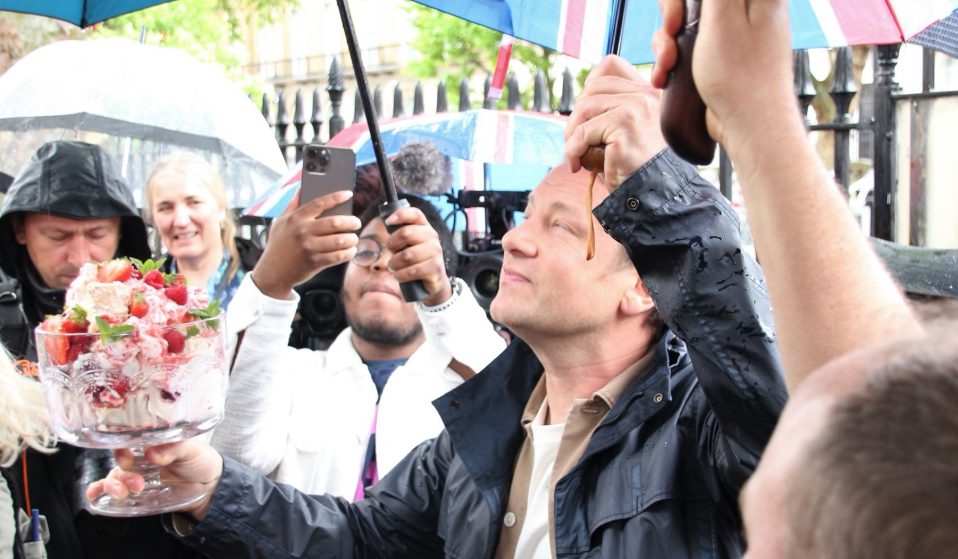 Shifting the focus from the cost of living crisis to tackling obesity while many starve or freeze is farcical and pointless, writes Fatzine founder Gina Tonic.

Shifting the focus from the cost of living crisis to tackling obesity while many starve or freeze is farcical and pointless, writes Fatzine founder Gina Tonic.

When you think of protest, you may think of throwing paint on models wearing fur, chanting ‘whose streets? Our streets!’ or placard making. You might not think of an Eton mess: a dessert that celebrity chef Jamie Oliver spent a morning carrying around outside the gates of Downing Street last week to protest the government delaying the rollout of the anti-obesity legislation that was introduced last year.

The setbacks, specifically looking to wait one year on introducing a ban on two-for-one deals on unhealthy snacks and advertising unhealthy food before watershed, were derided by the TV cook. His comments – “We want to put child health first […] It’s our job to make sure that we can build a better future for our kids” – might to some be reminiscent of Helen Lovejoy asking the Springfield congregation to “please think of the children”. For whatever reason, Oliver and the crowd that participated in the protest feel that banning cheap food will help children during a horrific cost of living crisis in the UK.

In a time where almost one in ten parents are likely to be using a food bank this year, food prices are up nine percent and many homes are lucky to even afford the electricity to cook any food they can get their hands on, shifting the focus onto tackling obesity is not only farcical but pointless. It is also a pointed attack on the working classes not just on a monetary front, but because the majority of those who are overweight are also working class.

“What this really is is a perfect manifestation of the place where fatphobia and classism meet,” Marie Southard Ospina, a fat-positive writer and mother of two tells me. “Banning deals that allow people, especially those with limited or low funds, to purchase cheap food isn’t going to stop fat people from existing. Banning ‘junk food’ adverts won’t do that either. All this will do is make it even harder for working-class people to buy groceries on a budget, while perpetuating the notion that fat people deserve condemnation.”

This time last year, the cheapest pasta in my local supermarket (one of the Big Four), was 29p for 500g. Today it’s 70p. That’s a 141% price increase as it hits the poorest and most vulnerable households.

She continues: “The reality is that a buy-one-get-one-free deal could be the difference between a family having meals for one or two days maybe hasn’t crossed Jamie Oliver’s mind, nor the minds of many of the people quick to follow him in protest. For those of us who are fat, or poor, or both, however, this is a reminder of just how little we are valued from a sociocultural perspective.” Indeed, this legislation, whether it starts now or a year from now, will cause harm on not just a fiscal level, but an emotional level too.

According to Emily Unwin, a registered dietician with a master’s in foods and nutrition, the legislation doesn’t make sense from a physical well-being point of view either. “The idea that specific foods (cheap, fast and processed food) make people’s bodies bigger or smaller is a completely inaccurate picture and ignores the extremely complicated web of factors that contribute to body size, energy balance, and composition.” She recommends the obesity systems map –  an expert‐developed diagram describing the complex drivers of obesity – “as a really good visual on how complicated body size is and how small of a role food really plays.”

Unwin also notes that the word “obesity” itself is a “medicalisation and demonisation of larger bodies”, and many see it as a slur. As a fat person myself, I would fully recommend avoiding its usage.

As well as noting its blatant fatphobia, Unwin confirms the legislation is “just punishing poor people”. “The idea that making food more expensive will prevent people from buying it is absurd. But even further than that, poverty is financial scarcity/instability/debilitation, but also a shortage of unstructured time – people who can’t afford expensive food also, likely, can’t afford the time it takes to cook.”

The answer to helping people lead healthier lives doesn’t lie in making Haribo more expensive or banning KFC adverts. The answer doesn’t lie in associating fatness with poor health and shaming swathes of people for their body size. In a time where most people are struggling to get food on their plates, the government should be making sure people get fed at all, rather than preaching morality around food.

Unwin says that “our society has a tendency to punish rather than uplift” and that by spending millions on legislation that makes unhealthy food inaccessible rather than healthy food more accessible, the Tories prove this point. By shifting the focus onto food companies that make sugary snacks, the government gets to hide behind this supposed virtuous stance on food while across the UK, many continue to starve.

Linkedin
RELATED ARTICLES
OTHER ARTICLES
Photographer Sean Maung reflects on documenting a small town in Pennsylvania afflicted by high levels of unemployment, poverty, violence, crime, and addiction.
Theo McInnes’s photos of the annual event provide an intriguing snapshot of contemporary Britain.
David 'Dee' Delgado’s photo project is about honouring and uplifting the city of his youth, and a world rapidly disappearing under the relentless onslaught of gentrification.
The action took place in response to the 200 asylum-seeking children who were placed in hotels run by the Home Office who have gone missing.
Following the release of his debut single, Deyaz talks battling addiction, dealing with his struggles through music, and building a budding music career from his living room.
After blocking the Scottish government’s gender recognition reform bill, Westminster is now devising further changes to the law to make it harder for trans people to self-identify.