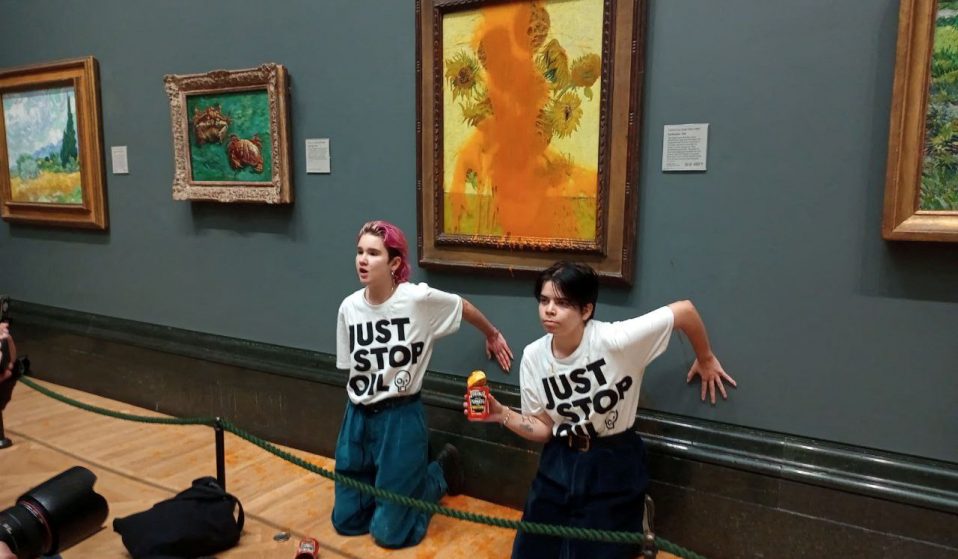 The hate and vitriol Just Stop Oil faced after throwing soup over a Van Gough painting has been immense. Here they explain why it won’t deter them.

The hate and vitriol Just Stop Oil faced after throwing soup over a Van Gough painting has been immense. Here, one of their members explains why it won’t deter them.

‘Get out of the way, you fucking cunts!’

Language like this, and even acts of physical aggression, have been directed daily at the Just Stop Oil supporters who spent October blocking roads, throwing soup on paintings and spraying orange paint all over London’s shrines to power and wealth.

I am one of the Just Stop Oil supporters who threw soup at Van Gogh’s Sunflowers painting in the National Gallery on October 14th. I know exactly how it feels to be a target of this rage.

I still remember the tone one of the gallery curators took as he walked up to myself and my fellow Just Stop Oil supporter Phoebe Plummer while we were – for better or for worse – glued to the wall. He spat the words “fucking stupid bitches” at us. Of all the times that I have been yelled at while sitting on roads; of all the slurs, insults and threat that have been thrown my way, that one hurt the most.

One middle-to-upper-class gentleman, in his velvet blazer and corduroy trousers, making two young people the target for his contempt – it really stung. He wanted to hurt me and he wanted to hurt Phoebe.

So why are Just Stop Oil persevering with actions that generate such intense hostility?

Look around you. Our social and environmental support systems are collapsing. People are dying on every continent – starving, drowning, burning. 33 million people forced from their homes by the Pakistan floods. 146 million struggling to feed themselves in sub-Saharan Africa.  3000 excess deaths during the summer heatwave right here in the UK.

With this context in mind, do our actions really seem disproportionate? On the contrary, they’re a minor annoyance compared to the catastrophe that’s speeding towards us. If you walk past a burning house and see a child trapped inside, do you write a letter to the fire brigade? No, you smash a window and jump inside to help. We’re facing exactly that situation on a planetary scale.

Given the magnitude of the crisis we face, it’s not that weird that people are blocking roads and throwing soup at great masterpieces. What’s more weird is that we aren’t all doing that, every second of the day.

So what’s needed most urgently now are dramatic acts of public awakening. Huge statements that embody the crisis we are in. We need to provoke and disturb. If that takes the form of people jumping out of their cars, shouting and swearing, and dragging us out of the road, good. At the historical juncture we’ve reached, silence and indifference are far more dangerous than outbursts of road rage from passers-by.

We’re not trying to win everyone over or attract converts to ‘our cause’ (as the press like to call it). Its government action we’re interested in – and we have one game plan only: to get them to end new oil and gas now.

If they feel people care enough about ending oil and gas, they’ll do it.  But, and this is the counter-intuitive part, people don’t have to like Just Stop Oil to hear our message about the destruction we’re facing. It’s clear that people can separate the message from the messenger – supporting the cause, while objecting to the methods used in its service.

You’ll hear this separation repeated over and over in the media. ‘Just Stop Oil are doing their cause a disservice’. ‘Their cause may be noble, but the methods are a disgrace.’ ‘The message is right but the tactics are wrong’.

This separation will work for us in the end. The more we act, the more people hear the message: that new oil and gas will bring death and destruction to us all. We’ll do whatever it takes, non-violently, to get this reality across.

We know that people can and do hate the messenger but still absorb the message. And the more people hear it and feel it, the more pressure the government will come under to act.

It’s a paradoxical strategy, for sure. It goes against the conventional wisdom that says you need to be popular to be influential in the world. And it’s easy to be sceptical of logic that challenges us, and ideas that take us out of our comfort zone.

But here history is our guide, our comfort, and our true North. So many movements have used the same logic to achieve their aims – the Suffragettes, the Freedom Riders in the US, the women of Greenham Common and the pioneers of LGBTQ emancipation.

Like us, they were hated at first. Then they won, and became heroes. Many were in prison – and then statues were put up to them in Parliament Square. For some of these groups it took decades to turn around the public hatred they faced at first. But for others, it can happen within months – like Insulate Britain, who were insulted and hated, until politicians and establishment journalists started saying they were right after all.

It may even be the same for us. That thought keeps me going through the abuse and the insults. When I think back to that day in the gallery, the curator’s words still hurt. But at Just Stop Oil we have a strength and purpose that can overcome anything.

Linkedin
OTHER ARTICLES
Max Miechowski reflects on documenting land that is being lost to the sea – and the people who live life on the edge.
We sat down with trans comic Jordan Gray to discuss the power of portraying complex characters, giving humanity the benefit of the doubt and getting naked on live TV.
How the sounds of nature, air force bases, walking across the country, Windrush and synthesisers have influenced one woman’s journey through music and life.
The photographer describes taking inspiration from Magnum photographers to craft an intimate and revealing portrait of the city.
Proponents of personality tests argue that they’re necessary to find the best person for the job – but in practise, they’re often discriminatory.
Recent research is highlighting the drug’s enormous potential for treating substance abuse.