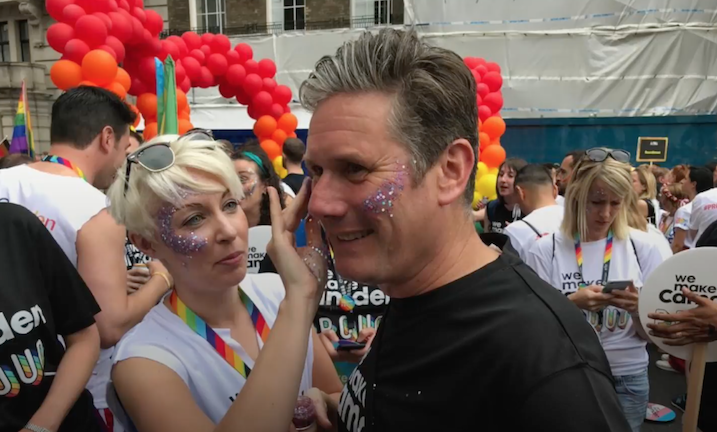 A week of delays and incompetence over a contentious video has thrown Starmer’s commitment to LGBTQ+ rights into question. Can the Labour leader ever win back the community’s trust?

A week of delays, inertia and incompetence over a contentious video has thrown Starmer’s commitment to LGBTQ+ rights into question. Can the Labour leader ever win back the community’s trust?

Last Friday, leader of the Labour Party Keir Starmer released a video in which he praised the work of Jesus House church in Barnet following a visit. The church has become a vaccination centre during the pandemic but the video, included in a now-deleted tweet, applauded the work of the church in reaching out to the community and showed Starmer alongside Labour MP for Brent Central Dawn Butler being led in prayer. The church has been a site of controversy for politicians before, with then Prime Minister Theresa May facing heavy criticism for her visit in 2017 owing to the church’s anti-gay stance. It is purported that Jesus House engages in conversion therapy – something the church strenuously denies.

The outrage to Starmer’s tweet was almost instant. Many Labour members and supporters were quick to take to Twitter to point out the church’s homophobic links. LGBT+ Labour, which represents LGBTQ+ members of the Labour party, released a statement the next morning, saying it was “satisfied that the Labour Party, and Keir Starmer personally, are determined to ban conversion therapy and achieve equality for LGBT+ people”.

We have spoken with the Leader of the Oppositions’s team regarding his visit to a church on Good Friday that does not align with our values on conversion therapy or LGBT+ equality. pic.twitter.com/qSOJWmYGos

The tweet was widely condemned as letting the leadership off the hook, as the original video remained live. Behind the scenes, the LGBT+ Labour staff network reached out to members of the Starmer’s team and the general secretary. In emails seen by Huck, the co-chair details a conversation with Starmer’s deputy chief of staff in which they stated: “I explained that while the visit itself shouldn’t of happened, mistakes can happen in vetting however the situation was now that the video was still live on social media, and nothing close to an apology for visiting the church has been issued. This was a serious issue and needed rectifying ASAP, with the minimum being that the video should be removed from social media as soon as possible. I was assured that she would speak to the relevant people and take our concerns [to them]”.

The emails also detailed a response from the General Secretary which they deemed to be “extremely poor”. The response recommitted the Labour party to standing with the LGBTQ+ community, but made little mention of the visit and offered no apology for it.

On the morning of Easter Monday, three days after the tweet first went up, and two days after conversation between the leader’s team and different LGBTQ+ groups within the Labour party, as well as continued outrage on social media, the Shadow Cabinet Office Minister, Rachel Reeves, went on Sky News to defend the visit, stating that Starmer was merely visiting a vaccination centre, rather than endorsing the church, despite the original video in which he spoke of meeting “young people and church leaders at Jesus House to talk about how to address inequalities and injustices…” still being live.

Labour leader Sir Keir Starmer has been criticised for visiting a church that has homophobic links.

Shadow Cabinet Office Minister, Rachel Reeves says 'he was visiting a vaccine centre, that doesn't mean we endorse their views.'

The TV appearance prompted a new round of outrage. At 9pm on Monday evening, three days after the first calls to remove the video and apologise, Starmer tweeted an apology for the hurt caused by his visit, saying, “It was a mistake and I accept that.” The video was removed.

I completely disagree with Jesus House’s beliefs on LGBT+ rights, which I was not aware of before my visit. I apologise for the hurt my visit caused and have taken down the video. It was a mistake and I accept that.

The affair came as renewed attempts are being made to ensure the Government commits to its promise to ban conversion therapy, which remains legal in this country. This is despite the fact that just last year the UN called for a global ban on the practice which they stated could amount to torture, which is prohibited under the Human Rights Act.

While damage was done by the delay, many were at least partially appeased by the apology. However, there are still huge questions around the lack of research done into the church before the visit, and the decision to send Reeves out defending it.

Less than 24 hours later, Labour MP for East Ham, Stephen Timms tweeted his support for the church, saying: “I applaud the extraordinary work of @jesushouseuk, and of churches and other faith groups, in supporting our communities throughout the past year”.

The tweet was seen as a provocation against the LGBTQ+ community, heightened by Timm’s own poor voting record on LGBTQ+ issues, having voted against same-sex marriage in 2013. The outrage was instant, with LGBTQ+ members and groups voicing their anger at the support of an allegedly homophobic church by a Labour MP in such close proximity to Starmer’s hard-won apology.

Behind the scenes, elected officials, MPs, members and supporters all expressed their discontent, contacting both the General Secretary and engaging with the party’s complaints procedure around the tweet. The leadership and the party remained silent. Despite several attempts made by Huck, the Labour Party did not reply to requests for comment on the tweet and whether Timms would face disciplinary action over it.

Almost 48 hours later, Timms released a milquetoast tweet, stating he’d had a meeting with LGBTQ+ later, but indicating no remorse or sorrow for having tweeted out his support for Jesus House. The leadership remains silent, despite clearly understanding the pain caused by the association with such a controversial church.

The incompetence and delay of the Starmer machine in relation to events of the last week cannot be understood in a vacuum. They form part of a wider pattern of at best, indifference to the concerns of LGBTQ+ labour members, supporters and the community at large.

Many point to Starmer’s inaction over Rosie Duffield, who has repeatedly found herself at the heart of controversy and has been accused time and time again of transphobia, allegations which she denies. Two members of her parliamentary staff, including a lesbian staffer, have quit over her transphobic views. His inertia comes after he refused to sign the Labour Campaign for Trans Rights pledge card during the leadership election, choosing instead to sign the more tepid LGBT Labour offering, which many perceived as a red flag.

Members of the LGBTQ+ community have repeatedly called for action from Starmer, but none has been forthcoming. Last year on August 7, the LGBT Labour Staff network sent a letter to both Starmer and the General Secretary over Duffield’s conduct. The General Secretary responded a month later on September 9 with a letter that one member of the network described as “totally dodging the substance and waffling on about Labour’s ‘commitment’”. The network never received a reply from Starmer’s office.

The reality is, being an ally takes more than just popping on some glitter and marching with us at Pride. It takes work. It takes listening to us. Standing up for us, even if it’s uncomfortable. Even if it means having difficult conversations within your own party. To borrow a popular phrase, silence is indeed violence. As the trans community in this country comes under sustained attack, as the government drags its feet on a conversion therapy ban, as homophobic hate crimes skyrocket, the brutal truth is, if you’re not with us, then you’re against us.

The events, the delay, the ignorance and the silence of the last 12 months have convinced many that Starmer is no ally. It’s going to take a lot more than a few hurried words in a tweet to win back that trust. If he doesn’t, then Labour can no longer claim to be a party fighting for LGBTQ+ people.

Linkedin
RELATED ARTICLES
OTHER ARTICLES
In the last of our dispatches from OFFF Barcelona, Rufus Deuchler and Vincent Gault discuss the future of creative process.
While protests over abortion rights rage in the US, access to abortion services is still almost nonexistent in parts of the UK.
The government’s failure to take long Covid seriously has led to the formation of a group campaigning for the thousands of forgotten victims of the illness.
Over the weekend, London locals came together to resist a pre-planned police raid targeting delivery drivers.
In the latest OFFF Dispatch, the enigmatic designer dives into his process, connecting the dots between his unique and varied creative output.
Following the success of her debut novel, the Tottenham native is restating her commitment to the place that made her.