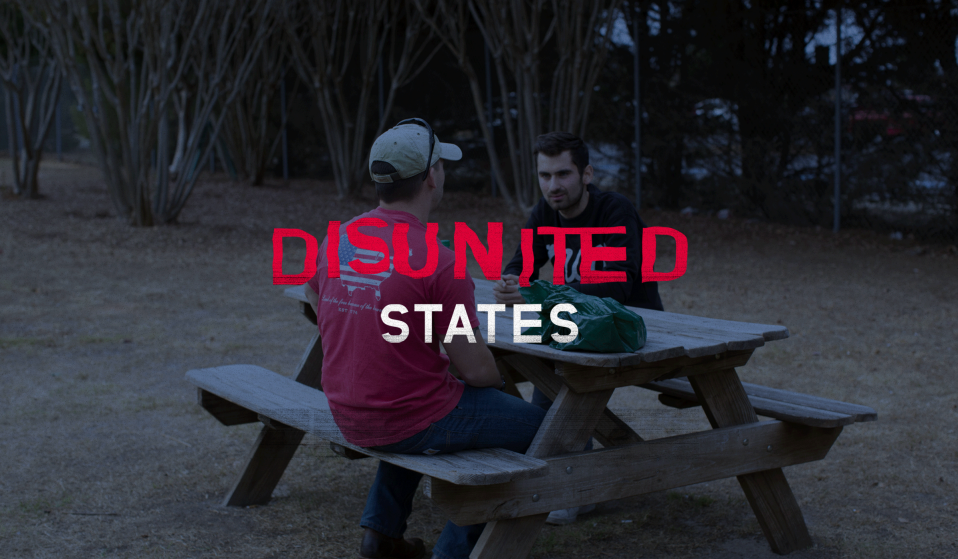 Text By Will as told to Michael Segalov

Heading out into rural Georgia to meet Trump supporters was always going to be an uncomfortable task. When Huck got Kicked out of a local gun show, a young military guy named Will grabs us and asks to talk. Here's what he had to say.

“There are people right now going absolutely ape-shit because Donald Trump got elected, and you know, they’re saying we’re all, all sexist misogynist homophobic xenophobes.

It’s not the case.

See right now we’re in the middle of deer season ruts are kicking off. This [gun show] ain’t very crowded because a lot of people are out hunting in the woods.

If she got elected, that ends. There’s a lot of controversy over gun shows because people think that you know, no one needs an AR15 (assault rifle), but I’ve got an AR15 and I love the hell out of it. I love shooting. I love having a good time.

I’m not going to go to a movie theatre and kill people with it… but she won’t let me have one because she thinks I don’t need one. But it’s not her job to tell me what I need and what I don’t need.

See people in the South are very – we’re stubborn. But we also have a way of doing things.

I heard y’all getting kind of the run around in there and I don’t want you to think that’s how we, you know, really treat people down here. We’re trying to be polite, we’re trying to be accommodating even if we don’t have the same view points, see the same thing.

You see Perry is a pretty small town. Everybody in there knows each other, everybody knows their grandparents and their dad. They know who’s not from here and who is. I moved to Perry, I was born in Macon just up the road. I was about seven or eight, but I’m still an outsider.

People are terrified, but I honestly don’t know of what Trump said was garbage and what was not.

Look at Jeb Bush. Jeb Bush had super PACs that spent about $125 million on him, and he didn’t even make it deep into the primaries. Donald Trump didn’t spend nowhere near that money on advertising, he saved it all for the campaign because he didn’t have to. 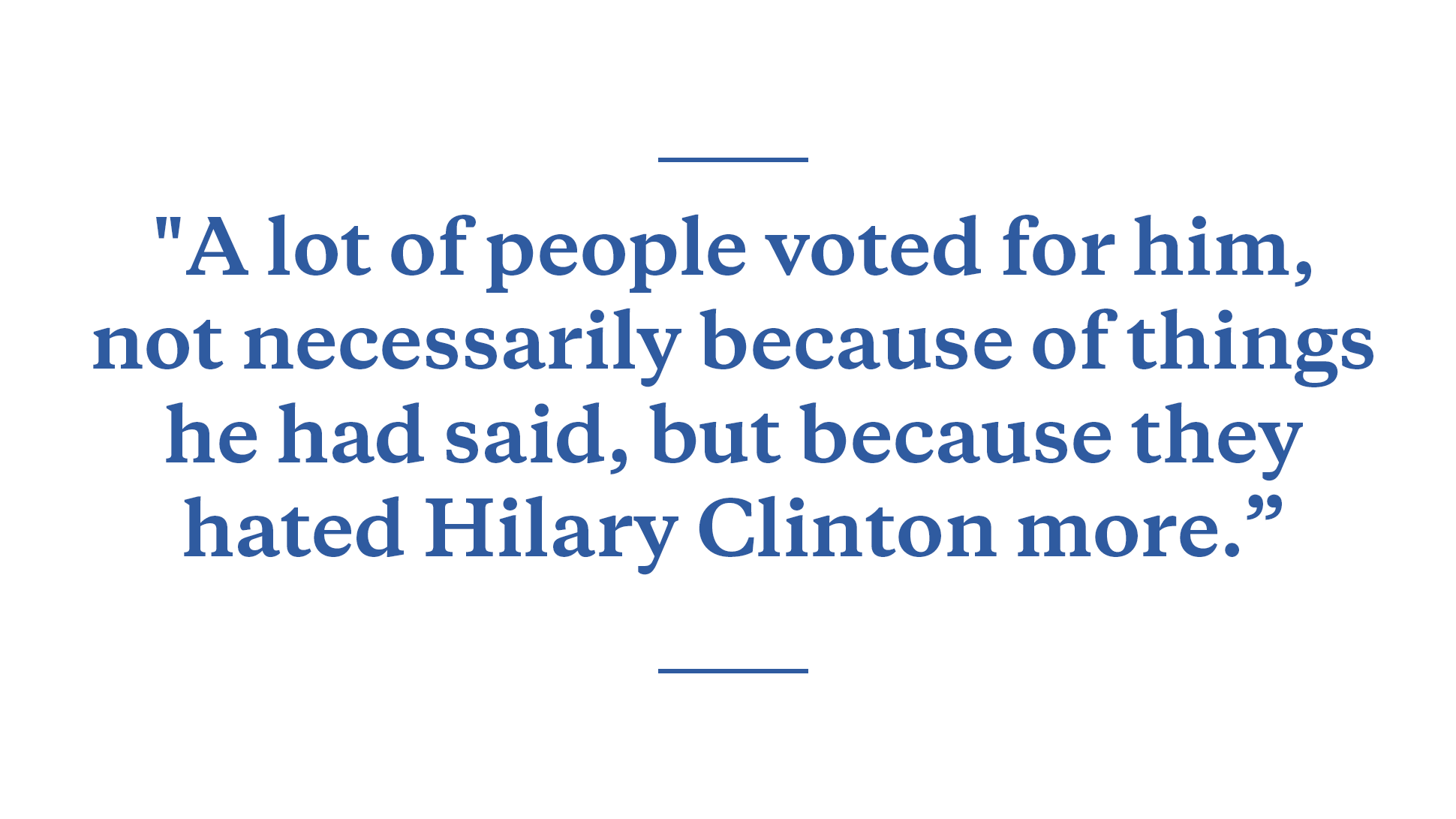 Yes the KKK is marching in North Carolina right now, and of course there were a bunch of racist people who thought Donald Trump was the second coming of Nathan Bedford Forrest.

I think that a lot of people voted for him, not necessarily because of things he had said or done, not because they liked him, but because they hated Hilary Clinton more than they hated Trump.

If you can hate Hillary Clinton enough to look past the racism and the hate an well I don’t know if it’s a good thing. I honestly don’t know.

I went in, I left the presidential ballot box blank and just voted for the Senators and for the local government.

I think this wall idea is stupid. Beyond stupid. You know what I mean. Have you even looked at the border? You can’t build that wall. You could do it maybe if you built it a foot high, maybe. But it’s gonna cost trillions. We can’t even put a fence up. We got a fence in some parts, we couldn’t afford to put a fence up along the entire thing. How do you think you’re going to build a wall, and how do you think you’re going to get Mexico to pay for it?

We’re gonna tell them, okay we’re no longer buying anything, we’re not gonna import anything from your country. Uhm, that’s not gonna work. That’s not going to work at all.

There are things we consume every day in this country that we can’t get anywhere but Mexico. Take California. Everybody loves avocados, everybody wants an avocado. Avocado takes up a lot water. We used to get them all from California. Well, California’s run dry, so  now we got them from Honduras, from Mexico, Are we just going to say, alright, no more avocados? We’re just going to cut off everything we get out of Mexico? It doesn’t make sense.

I’m 26. People our age are totally different from our grandparents’ generation. 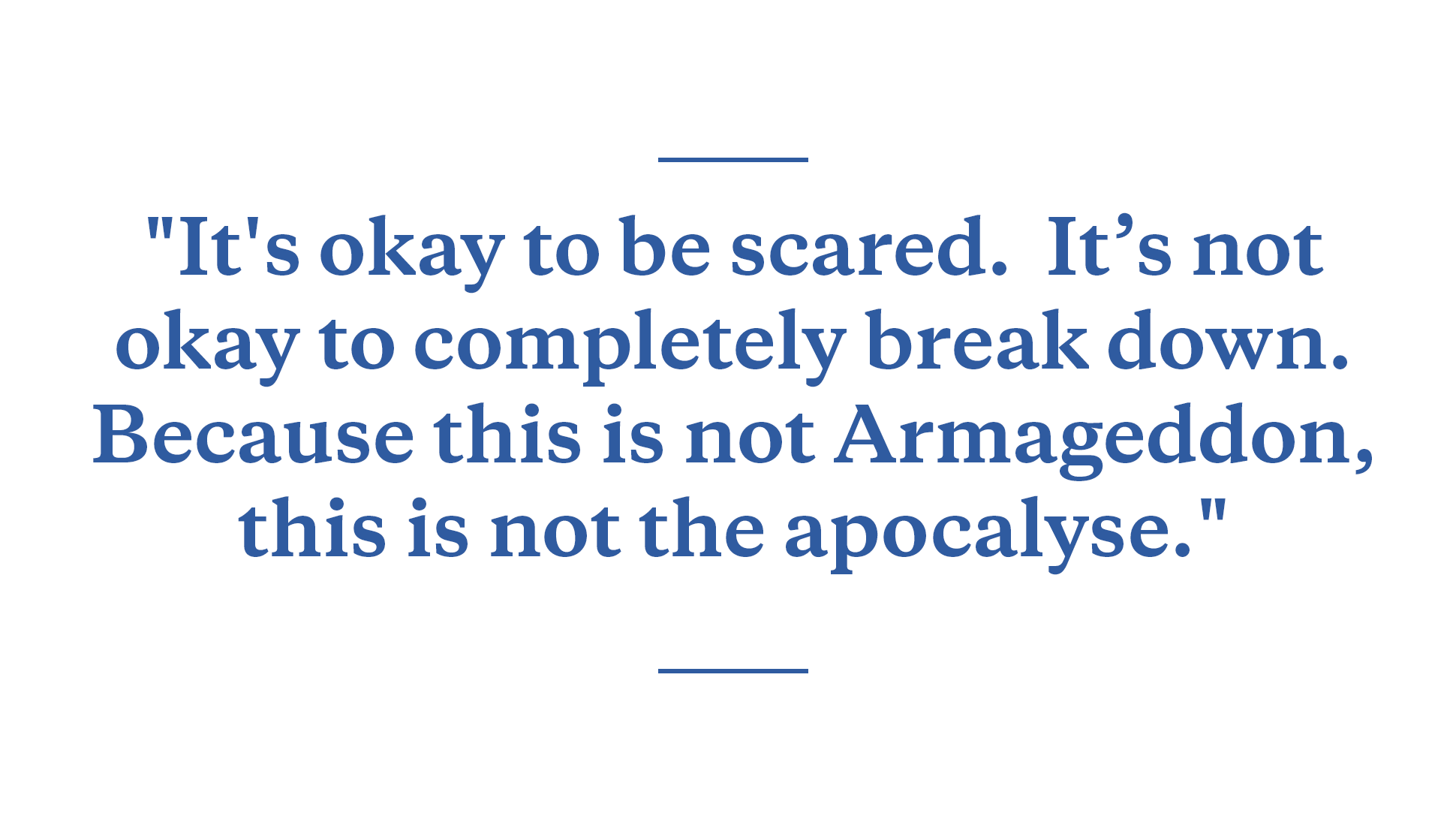 If you need a room to cry in and hug a therapy doc because your candidate didn’t win, you need to revaluate some shit.

It’s okay to be scared. It’s okay to feel a certain way. It’s not okay to completely break down. Because this is not Armageddon, this is not the apocalypse. We’re not at the end of the world.

Life in general is hard, life down here is hard, what was a recession for the rest of the country was an economic depression here. Pretty much all we had was construction, and then that tanked.

Nobody went in the streets and freaked out. You all need to calm down. Protest if you want to, by all means I’m for it, but do so in a way that dignifies you as a person.

We have a democratic process. We impeached Nixon, and Nixon quit four days later. If it came to that, if things got so severe and everybody realised: oh crap, he was telling the truth every time he said something stupid, could I see that happening? Yeah.”

Huck’s News Editor Michael Segalov will be on the ground in Atlanta over the coming days. Keep track of his progress as he asks where America goes from here. And if you’re in Atlanta and want to share your story, please get in touch.

Linkedin
RELATED ARTICLES
OTHER ARTICLES
The idea that a younger generation is abandoning work has become a popular narrative online, but it doesn’t necessarily reflect reality.
Thousands of protestors gathered in Westminster to express their sadness and fury at the fatal police shooting of a young Black man in Brixton.
As the Scottish government announces a rent freeze, an activist with Living Rent who fought and won shares how they did it, and what must come next.
Photographer David Corio’s archive offers a glimpse inside a revolutionary era of music and nightlife.
With skyrocketing rents, packed out viewings, bidding wars and more, renting in London has never been harder.
The two-day long event returned to London this year, showcasing a spectacular parade, steel bands and Caribbean food.