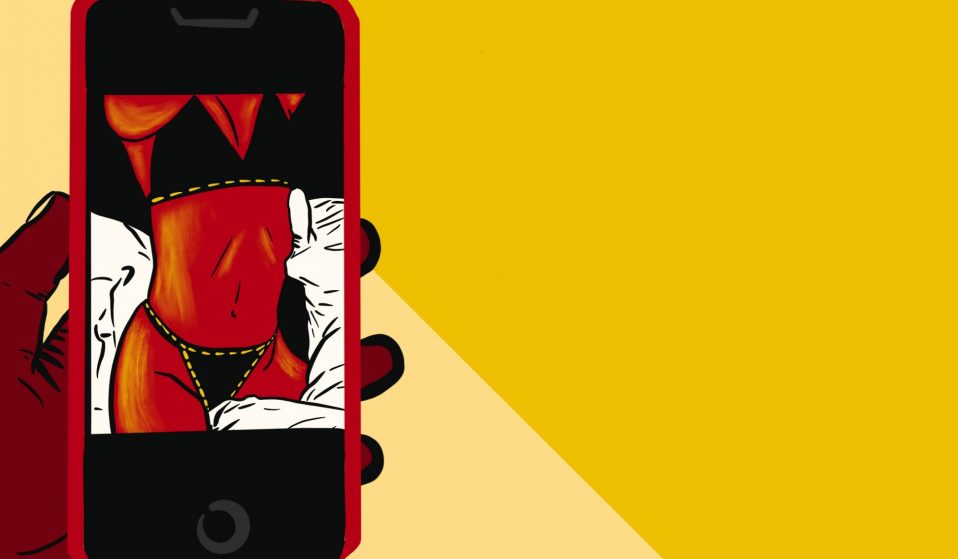 A new app allows daters to create customised agreements before exchanging nudes, but experts and survivors question just how effective it could be in stopping perpetrators.

A new app allows daters to create customised agreements before exchanging nudes, but experts and survivors question just how effective it could be in stopping perpetrators.

“It was really isolating,” says 22-year-old Frances*, whose nudes were sent around her school when she was just 14. “Other girls told me that I knew the risks and brought this on myself. I felt completely alone and unable to trust anyone.”

Frances’ photos were shared without her consent by an ex-boyfriend. “I wasn’t very well-liked in school at the time,” she tells Huck, “so I felt lucky to be dating this guy. When he asked for nudes, I felt pressured into it.” After breaking up a few weeks later, the boy sent Frances’ nudes to others in his year. “They were around the whole school in no time,” she says.

After being subject to “slut-shaming and victim-blaming” by her peers, Frances was discouraged from reporting the incident to the police. “I was scared that if I told either my school or the police that I’d end up even more ostracised at school.”

Now, there’s an app which hopes to change this. Initially launched in the summer, e-gree allows its users (aged 18+) to create personalised legal contracts for almost anything – including, but not limited to, dating, breaking up, and sexting. All users need to do is head into the app, pick the category that suits them, adjust a few details, and get the other person (or people) to sign.

What to do if you have had intimate images shared online without your consent:

🧡Keep calm, collect evidence
🚔 Report to police
💥Report content (we can help!)
💬 Talk to the Helpline for more help and support

The advantage of this, according to e-gree’s chief legal officer, Keith Fraser, is that you don’t need to involve a lawyer. “Today’s legal system is expensive, intimidating, and non-responsive,” he explains. “We envisaged a better way.”

While admittedly ‘unsexy’, signing a contract before exchanging nudes could offer a watertight way of ensuring photos remain private. “The sexting e-greement (which became available in September) ensures that a party understands that they can be legally liable for damages resulting from their misuse of the other person’s intimate details, disclosures, and photos,” explains Fraser.

While this sounds good in theory, it also raises a number of problems. The first relates to e-gree’s USP as a cheap legal source. If one party breaks the contract and distributes images without consent, the victim will have to go to court. “That’s often complicated and costly,” says Honza Červenka, a solicitor at McAllister Oliviarius, “especially if the other party is out of state or in a foreign country, as is often the case with online interactions.”

There’s another, more insidious problem. “Such legal ‘solutions’ do appear to place the responsibility on an individual to not allow themselves to be a victim,” Mortimer explains, “rather than on a perpetrator not to be a perpetrator, and that can’t be right.”

Survivors of sexual abuse are often victim-blamed for the crime they were subjected to and told to adjust their behaviour to prevent it from happening again. By encouraging potential victims to take preventative action when sharing their nudes, it suggests that the onus is on them to protect themselves, rather than on perpetrators to – simply – not break the law.

In 2018, Johnstone’s nudes were uploaded to a folder on a website called Mega.NZ – a file-hosting service based in New Zealand. She says her “heart stopped” when she found the photos of herself after being sent the link by both strangers and people she knew. “The worst part was that I had no idea who had done this to me,” she explains. Despite reporting it to the police several times, no action was taken. “I gave up completely. For all I know, my pictures are still being shared frequently.”

Amendments to the law and an increase in education is vital in protecting people from the detrimental impact of intimate image abuse, which, Mortimer explains, can include “deep distress, depression, anxiety, self-harm, and suicidal ideation”.

Frances is no stranger to these long-term effects. “I felt so violated and out of control that it led to an eating disorder,” she says. “After having so many people make fun of my body for things I couldn’t help, it was a way of taking back control for myself. Even years later, this experience has impacted my mental health, in terms of trusting people in romantic ways and how I approach sexual situations.”

*Name has been changed to protect identity.

Linkedin
RELATED ARTICLES
OTHER ARTICLES
After news broke last week around an expected reversal of the 1973 landmark law that made abortion legal in the US, protestors gathered in the UK in support of American women.
The government’s failure to take long Covid seriously has led to the formation of a group campaigning for the thousands of forgotten victims of the illness.
To mark the anniversary of the mass trespass of Kinder Scout, a group of hikers came together with the intent of creating a new, fully inclusive culture for rural spaces.
Over the weekend, London locals came together to resist a pre-planned police raid targeting delivery drivers.
A group of Ukrainians living in Poland are helping Ukraine withstand Russia’s brutal invasion by buying supplies and shipping them directly to the war’s frontlines.
The revered showbiz chronicler recalls his journalistic beginnings, documenting subcultural scraps in the ’80s.