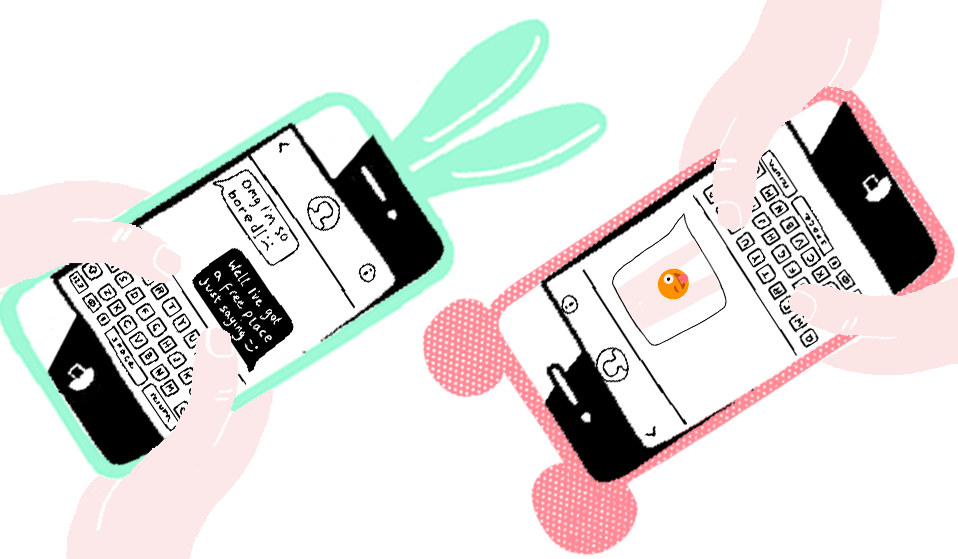 Some things that happen in adolescence are a given: regrettable hair cuts, a taste of heartbreak, accidentally drinking until you’re violently sick on yourself.

I would argue that, today, some form of sexting also makes this list – from the exchange of explicit text messages to the sending of the subtle and charming “dick pic”. Even when I was fifteen – which was a decade ago, at a time when Nokia phone cameras had all of about four pixels – my friends would happily drop 50p on sending a naked selfie to a crush.

Now, in a hyper-digital world, it has become almost as much of a rite of passage as a first skin on skin sexual encounter. The age at which kids do it might vary, but according to the NSPCC, one in seven UK 11-16 year olds have taken or sent a naked photo, with the actual number probably being much higher.

The thing about sexting is that, just like regular sex, while it will almost certainly happen, it can still have serious repercussions. You might not need to get the morning after pill or take a quick trip to the STD clinic for antibiotics, but the fear and sometimes the reality is that messages, pictures or videos will be seen by the wrong person. In some cases they may even end up disseminated on a much wider scale than could ever have been intended, let alone imagined.

Of course this can affect adults too – and it’s just as socially and psychologically damaging when it does – but the difference with young people is the general idea that, just as they cannot legally give consent for sexual intercourse until they are 16, nor can they make an informed decision about whether to take and share a sexual photo or video. Especially when that image or video has a risk of going viral.

While it’s right to criminalise adults who engage sexually with under 16s, the same can’t be said for young people having sex below this age. And yet, as currently stands, anyone under 18 who takes a sexually explicit image of themselves and shares it can be criminalised under UK child pornography laws.

That’s right, you can legally have sex 16, but cannot send a sexy photo until you’re 18, because the UK deems anything picturing someone under 18 as child exploitation. So, kids are being held liable for taking pictures of themselves, and can wind up on the sexual offenders’ register, as we’ve seen happen in some specific cases.

Probably recognising that it is draconian and unfair to criminalise children and not adults for sharing sexual pictures of anyone under 18, last week news broke that police would relax their stance. Simon Bailey, the National Police Chiefs’ Council spokesman for child protection, suggested that the police take a more case by case approach. “We will take all cases seriously with criminal investigations into those involving any form of exploitation. But it will always be a common-sense approach that doesn’t criminalise children unnecessarily.”

This is progress, but the debate around sexting rages on. Today UK Health Secretary Jeremy Hunt proposed a new approach to tackling the issue. Speaking to the House of Commons on the subject of suicide prevention, he expressed concern about the impact sexting can have on young people’s mental health. He called for tech companies to crack down on cyberbullying and sexting – and specifically what happens when the two are combined.

“I just ask myself the simple question as to why it is that you can’t prevent the texting of sexually explicit images by people under the age of 18, if that’s a lock that parents choose to put on a mobile phone contract,” he said, before claiming that there is technology that is able to identify sexually explicit pictures and prevent them from being transmitted.

Ultimately, I think Hunt’s right to link the conversation about sexting to mental health issues. Speaking from experience, it can be anxiety inducing to keep up with the pressure to sext as a young person, and to look a certain way when you do. And fortunately not speaking from experience, I can only begin to imagine the psychological ramifications of having your pictures fall into the wrong hands – which, when you’re under 18, could mean anyone from from your classmates at school to a predatory adult.

But how do we combat this threat? Not, I would argue, with banning, barring or criminalising sexting altogether – as we tend to do with anything that involves the right wing government and media’s two favourite moral panics about young people – that we’re tech-addicted on the one hand, and sex-crazed on the other.

Instead, why don’t we have an adult conversation about sexting? Not just in the House of Commons, or newspapers, but in schools or at home?

That conversation would accept that it’s unrealistic and patronising to shut down the conversation around sexting by trying to ban it all together, and instead, it would seek to teach teenagers what the potential risks are, to choose their partners wisely, and if it really comes to it, to just crop their head out of the picture.

At a time when technology is so ingrained in how we have sex, we desperately need to adapt the way we’re talking to young people about it. We need to criminalise adults who are sharing pictures of under 18s, and not be putting the children themselves on the sex offenders register.

Linkedin
RELATED ARTICLES
OTHER ARTICLES
Since 2007, Gideon Mendel has made 20 trips to document floods in 13 countries. The result is an alarming record of what has already been lost to the climate emergency.
After blocking the Scottish government’s gender recognition reform bill, Westminster is now devising further changes to the law to make it harder for trans people to self-identify.
A new exhibitions brings together the work of photographers who documented the deep unrest of these pivotal decades.
Social prescribing connects people with non-medical support to improve their health and wellbeing – but some experts worry it’s just a stick plaster solution.
Tristan O’Neill’s shots of dancers caught in moments of reverie at the height of rave’s golden age are a testament to the UK’s legendary club culture.
Activists and campaigners are fighting back against new laws that would seriously undermine the ability to take industrial action, calling it an attack on fundamental workers' rights.