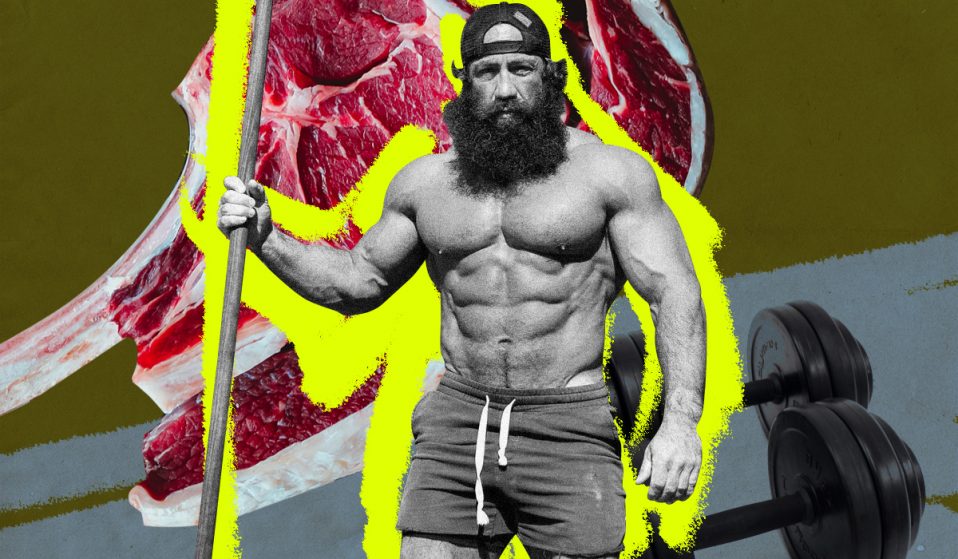 The influencer has built a powerful brand championing the ancestral lifestyle – but experts say his beliefs promote pseudoscience and harmful gender stereotypes.

Brian Johnson, or ‘Liver King’ as he’s known to his millions of Instagram and TikTok followers, has built a fitness empire selling organ-based supplements and pushing what he calls the ‘ancestral’ lifestyle of early humans. Liver King’s meteoric rise is owed to his extreme brand of masculinity: he eats raw organs – everything from bull’s testicles and cow’s lungs – is perpetually shirtless, dons a rugged beard and a backwards hat, refers to himself in third-person, and frequently utters catchphrases like “testicles not vegetables”, “put back in what the modern world left out”, and “liver is king”. His abs are so defined, he’s been accused by many in the fitness community of getting implants. Earlier this month, he was forced to admit to his use of steroids after previously having denied using the drug in numerous podcasts, videos and interviews.

Johnson crafted Liver King as a persona and brand to promote not only his many supplements, but also a fitness lifestyle and more importantly, a path to manhood. His ‘primal’ ethos argues that the modern world is deeply flawed and that men are swept up in the chaos of technology, losing their testosterone, and becoming weak and submissive. The solution Liver King presents is based on unfounded fantasies of a paleolithic man: dominant, a provider, muscular, unstoppable, fighting enemies, and eating the organs of his prey to draw strength and power.

Liver King claims to want to offer a solution to the ‘masculinity crisis’, or what he calls a “modern-day manicured man problem.” “Men are aimlessly wandering through life,” he says. “They… are weak and submissive pussies today because they’re not strong and they’re not strong because hard times make strong men. And there is no requirement for hard times in the modern world.” When his wife, Liver Queen, is shown, she is almost always subdued, embodying his idea of the perfect wife. Liver King maintains that he is not a misogynist, but says that “men were purpose-built for fighting… women are the opposite… more nurturing, compassionate, and emotional”. Baked into this model of masculinity is an outdated vision of gender dynamics that places men as hunters at the helm of the household while their queens quietly care for their brood.

Dr. Conor Heffernan, a historian and lecturer of Sociology at Ulster University, places Liver King in a repeating cultural trend in fitness culture – a trend that often overlaps with masculine ideals. “In one sense, Liver King is a politically-correct Andrew Tate,” Hefferenan says. “He isn’t as socially corrosive as Andrew Tate, but it’s that teaching masculine ideals to predominately young men that is also focused on being muscular. I think he’s more of a modern iteration of a longer crisis of masculinity in fitness cultures.” It could be argued that Liver King’s content is helping to fuel muscle dysmorphia – a psychological disorder characterised by an obsessive desire for a jacked physique, also known as ‘bigorexia’ – which is already on the rise, with experts blaming social media.

“The type of masculinity promoted in the body-building community and particularly with Liver King – it’s always been inherently right-leaning [and] quite dismissive of people who are deemed physically or socially weaker, and it’s always quite restrictive around emotions,” Heffernan says. “I think what’s different now in the modern age is that social media has bled all of these different communities into one another. So Liver King is in one sense the apex of far-right extremism in the US, alternative medicine and food cultures in the US, conservative ideals around masculinity, meme culture in the US, the fitness industry and the selling of supplements, and the proliferation of anabolic steroids in American society.”

Liver King’s promotion of regressive masculine ideals is concerning, as is his advocating a lifestyle and diet built around the behaviours of our primitive ancestors. What he’s preaching isn’t new, however. When Liver King invokes words like ‘biological,’ ‘evolutionary,’ and ‘apex predator,’ imbuing his preaching with pseudo-scientific verbiage, he is tapping into a longstanding tradition. Paleo and natural living have been around in various forms for years, from back-to-nature movements in Germany in the early 1900s to body builders pushing raw milk diets in the 1960s.

At the crux of Liver King’s tenets is the idea that our bodies are at odds with the modern tech-flooded world. “The human organism is superbly adapted to an environment that no longer exists,” Liver King’s website claims. “Our modern world is totally inappropriate for the bodies we inhabit today. The vast majority of our health and happiness problems result from this mismatch.”

But according to Dr. Marlene Zuk, professor of Ecology, Evolution and Behaviour at University of Minnesota, these claims do not have any basis in fact. Zuk has written about what she calls ‘misguided nostalgia’ for the Paleolithic era in her book Paleofantasy: What Evolution Really Tells Us about Sex, Diet, and How We Live. Zuk explains that Liver King’s language about the modern world – while seemingly extreme – is actually quite common. “There is often this sense that somewhere something has gone terribly wrong,” Zuk said, referencing a popular meme that shows humans evolving from chimps to men slouched over computers. But Zuk says that this argument may be based on misconceptions or oversimplifications of evolution.

The clearest example of this can be found in Liver King’s belief that we must return to cavemen diets. While it’s likely that meat was initially eaten raw before the development of cooking, paleoanthropologist Dr. Briana Pobiner says, “the earliest evidence for cooked meat (actually, cooked fish) is from about 780,000 years ago… But we don’t know the proportion of raw versus cooked meat in the diets of any early human species, really.” And, aside from the lack of evidence of Liver King’s claims, Zuk stresses the potential danger of eating large quantities of raw liver. “Eating large amounts of liver and other organ meats can give you toxic levels of vitamin A. That can kill you.”

While studying genetics and the remains of early humans may show us certain things about our ancestor’s biology, this information is more descriptive than prescriptive. As Zuk explains, “I think often people want something very specific like, ‘Is it really good for me to eat raw organ meats?… Or what were sleeping patterns like in the Pleistocene? And the short answer is, we really don’t know.”

Neither should we necessarily draw lessons on how to live from existing indigenous cultures, like the ones Liver King has visited. As much as Liver King glorifies a fantasy of the old ways of living, his examinations of modern indigenous cultures are not informed by anthropological research methods. Rather, his visits to tribes and assessments of their cultures lean more on stereotypes and romanticisation of indigenous peoples. As Dr. Heffernan notes, Liver King raises issues around race, by “co-opting ideas of ancestral-ness for a predominately white audience [which] rehash the harmful ’noble savage’ myth.” The ‘noble savage’ is a harmful stereotype that originated in the 17th century that imagines ‘primitive peoples’ as a wild race who have not been ruined by modern civilisation and holds modern indigenous cultures to an unreasonable and harmful ideal.

Liver King, like many other supplement-pushing fitness gurus, has been compared to a snake oil salesman. His promotion of raw organs as the way to building an unrealistic, drug-enhanced body is potentially dangerous. Liver King isn’t just selling his body – he’s selling a vision of manhood that young men are searching for.

But, like many things on social media, the lifestyle he sells is an illusion. His body is the product of steroids, not the consumption of raw organs. His persona is an act that has grown into a caricature of masculinity. This unrealistic and unattainable vision of manhood creates a feeling of deficit in his young male followers. As Instagram user @natec_3 commented on a post by Liver King: “This stigma of men having to be this tough, rugged and should never cry is the reason they hate their lives.” The harm these ideals pose is where the real crisis of masculinity lies.

Linkedin
OTHER ARTICLES
After blocking the Scottish government’s gender recognition reform bill, Westminster is now devising further changes to the law to make it harder for trans people to self-identify.
Following the release of his debut single, Deyaz talks battling addiction, dealing with his struggles through music, and building a budding music career from his living room.
After building his reputation covering the US civil rights movement in the 1960s, the photographer went on to produce some of the most enduring images of the past century.
Activists and campaigners are fighting back against new laws that would seriously undermine the ability to take industrial action, calling it an attack on fundamental workers' rights.
Photographer Becky Tyrell went down to the fading banger and stock raceway to meet a community desperate to keep it alive.
The action took place in response to the 200 asylum-seeking children who were placed in hotels run by the Home Office who have gone missing.